He even sacked his Boca Raton, Florida home, ripping it out to the skeleton and completely remodeling it over two-and-a-half years—with surprising All-Pro results (if you like stone, dark brown and natural sunlight). Now the Super Bowl champion has listed his 6,861-square-foot, extensively-renovated estate for $1.99 million. 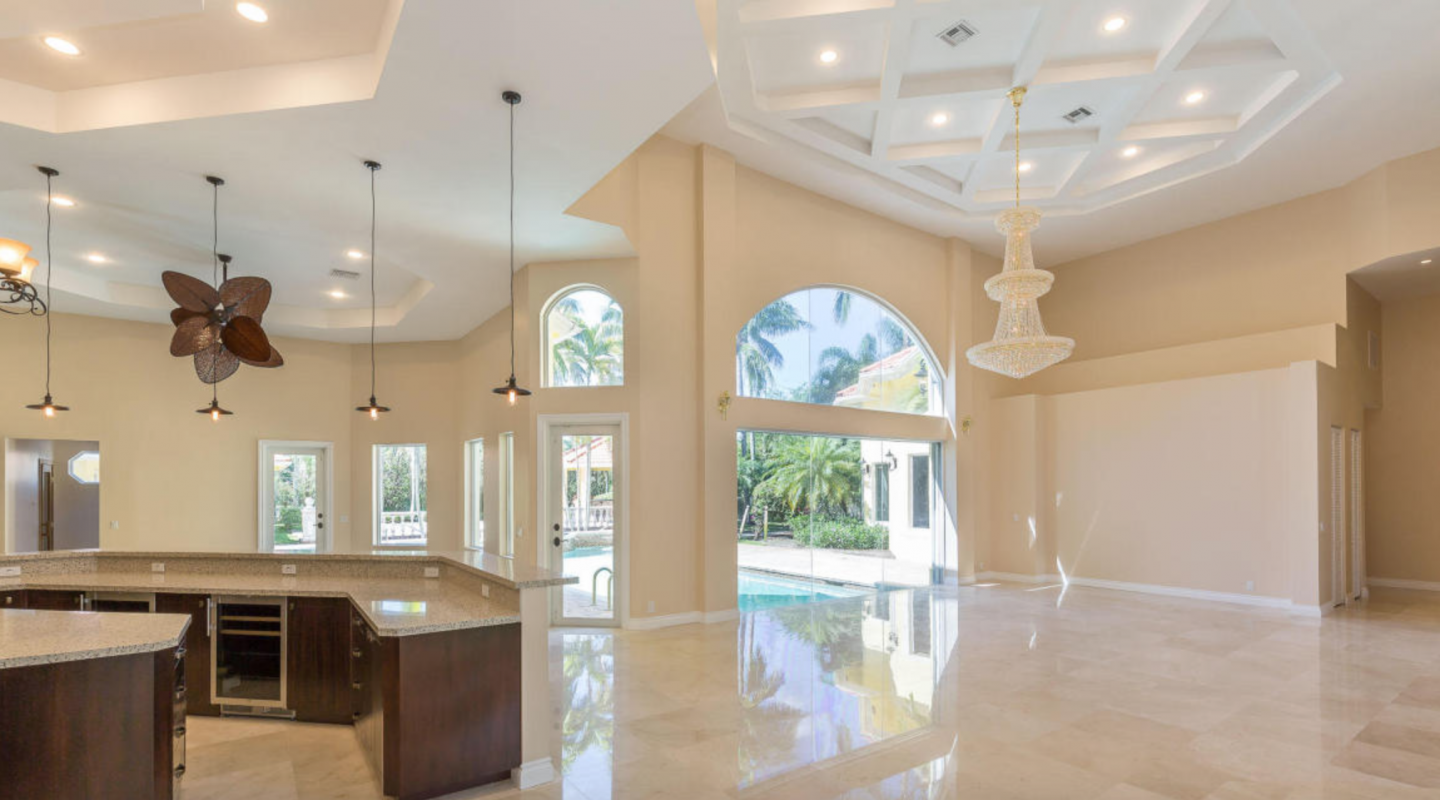 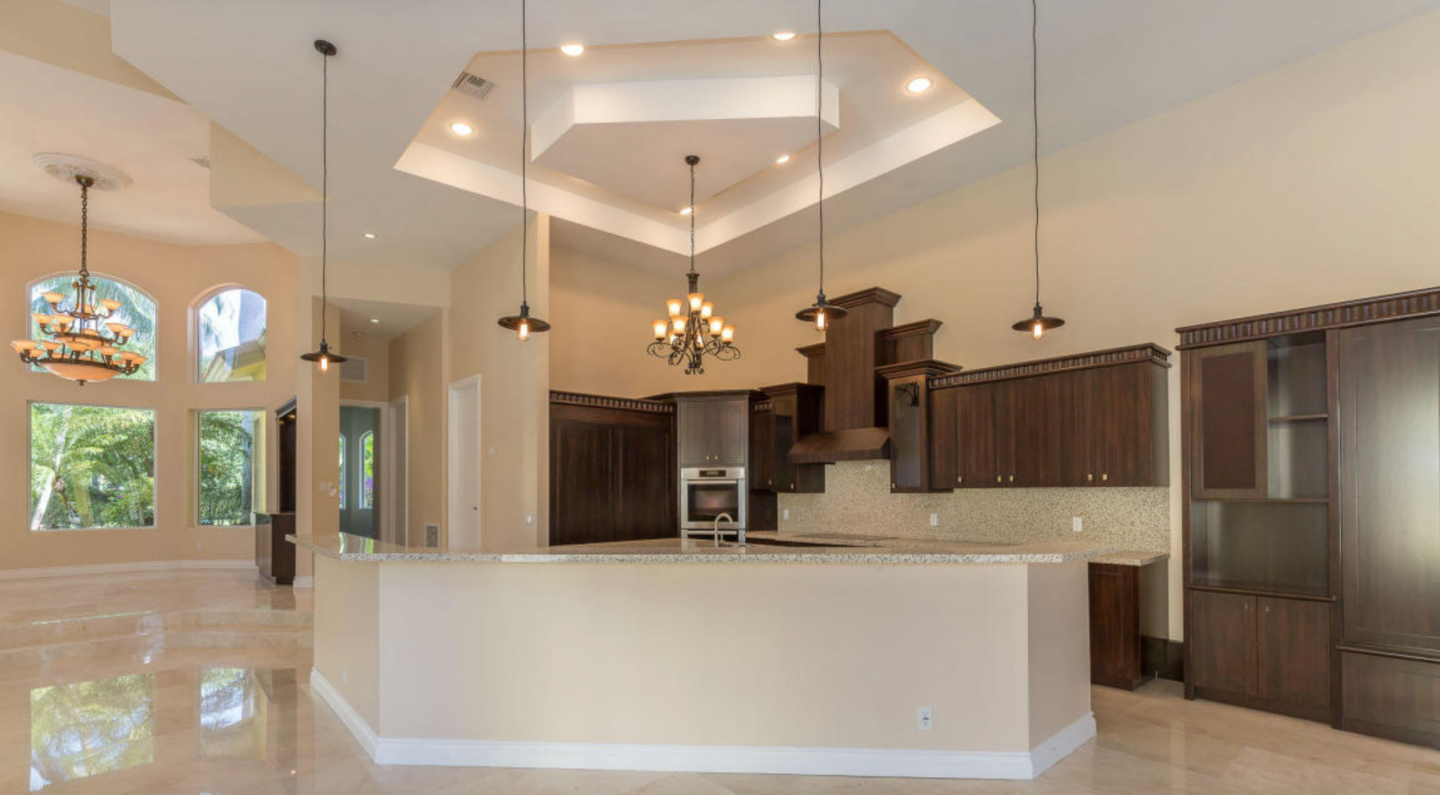 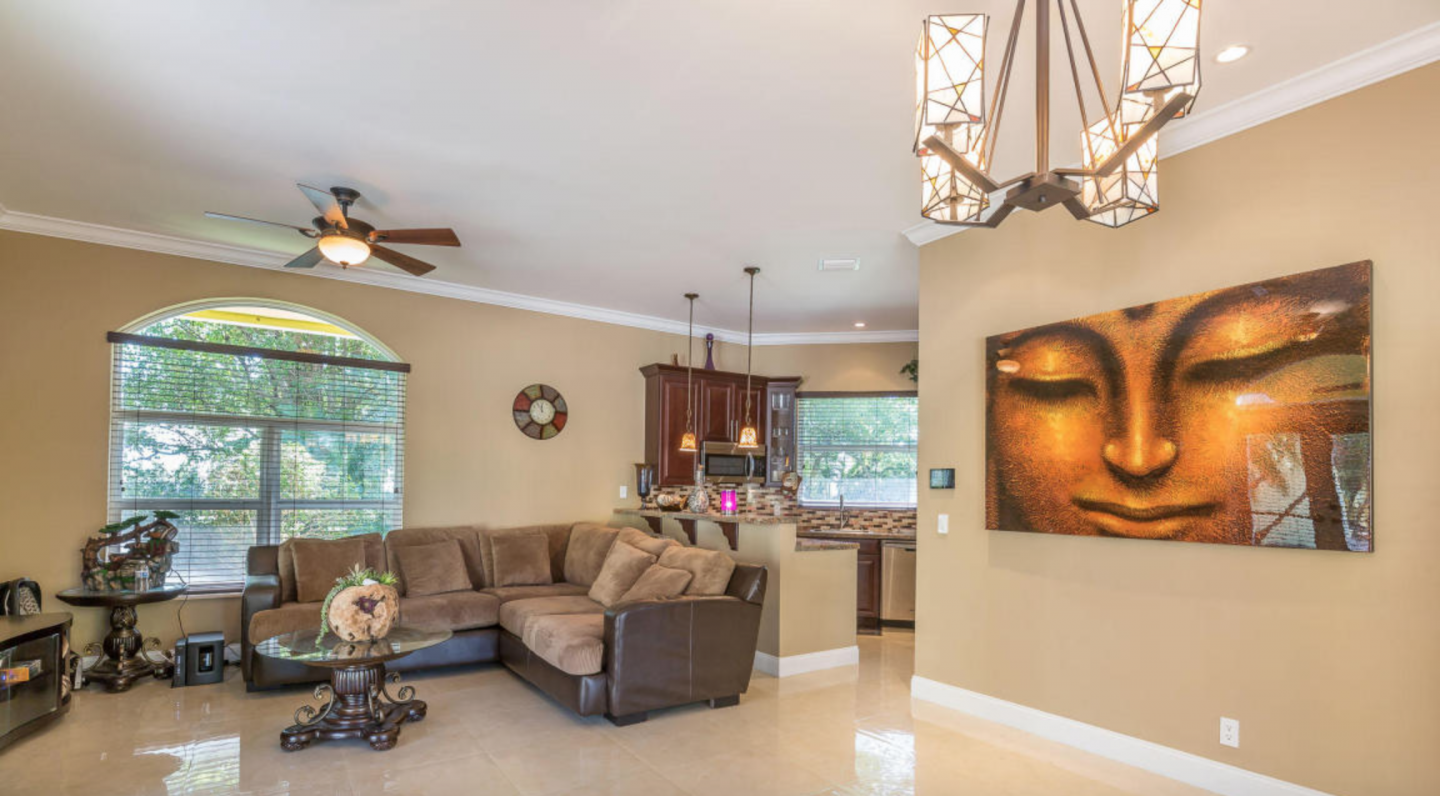 Pierre-Paul converted the residence from an old-fashioned estate into a wide-open contemporary residence.

Pierre-Paul, who bought the home in 2012 for $1.2 million, exhibited eclectic and masculine design instincts while transforming the six-bedroom, six-bath residence from an old-fashioned estate into a wide-open contemporary residence with a massive grand entrance, 21-foot-high coffered ceilings, crystal chandeliers, an upgraded kitchen with custom cabinetry, marble and rich hardwood floors, a spa and four-person sauna, and oversized impact windows that allow the bright Florida sunshine to pervade the home. The house also offers a 400-square-foot master suite with walk-in closet, a master bathroom with whirlpool tub and shower, and an office with built-in shelves and cabinets. 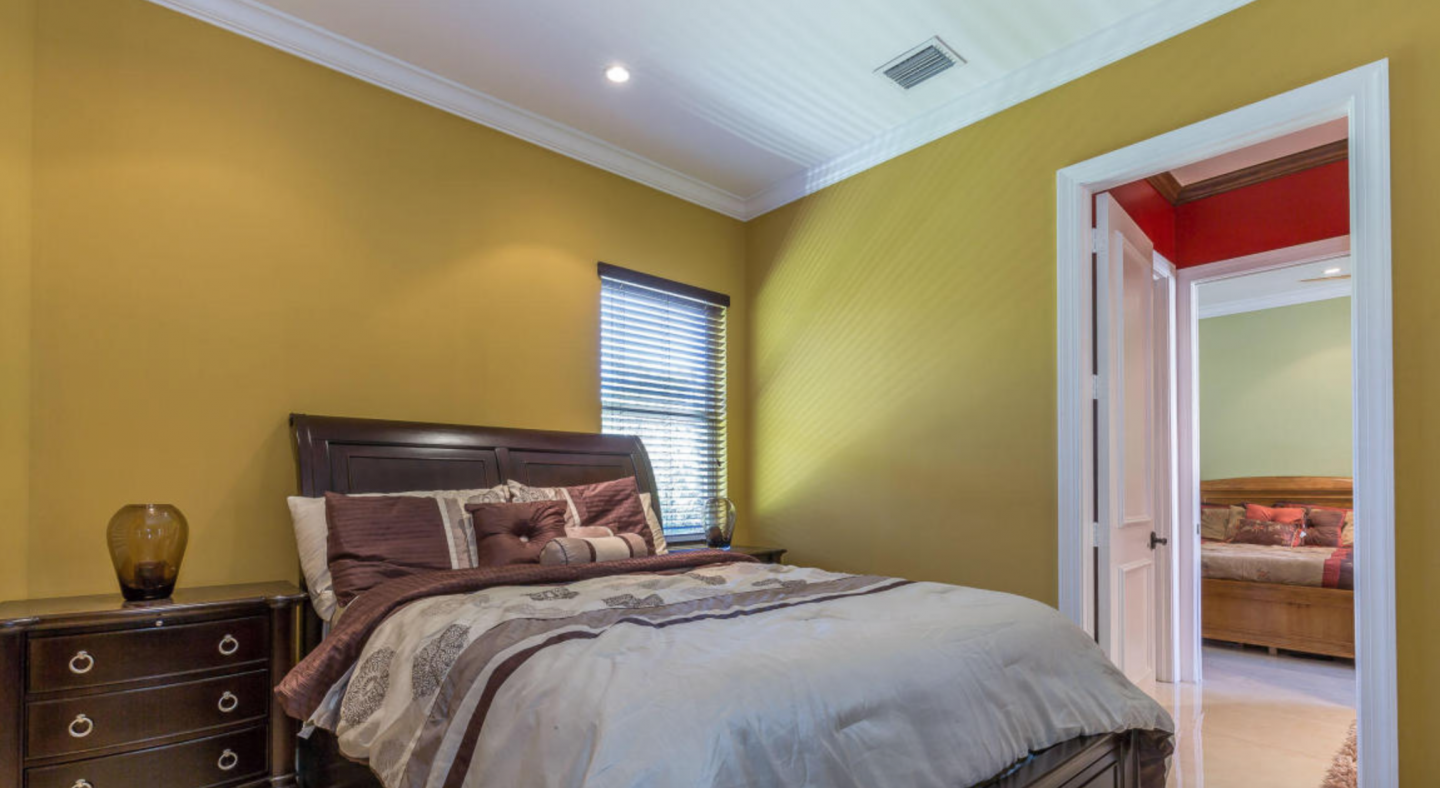 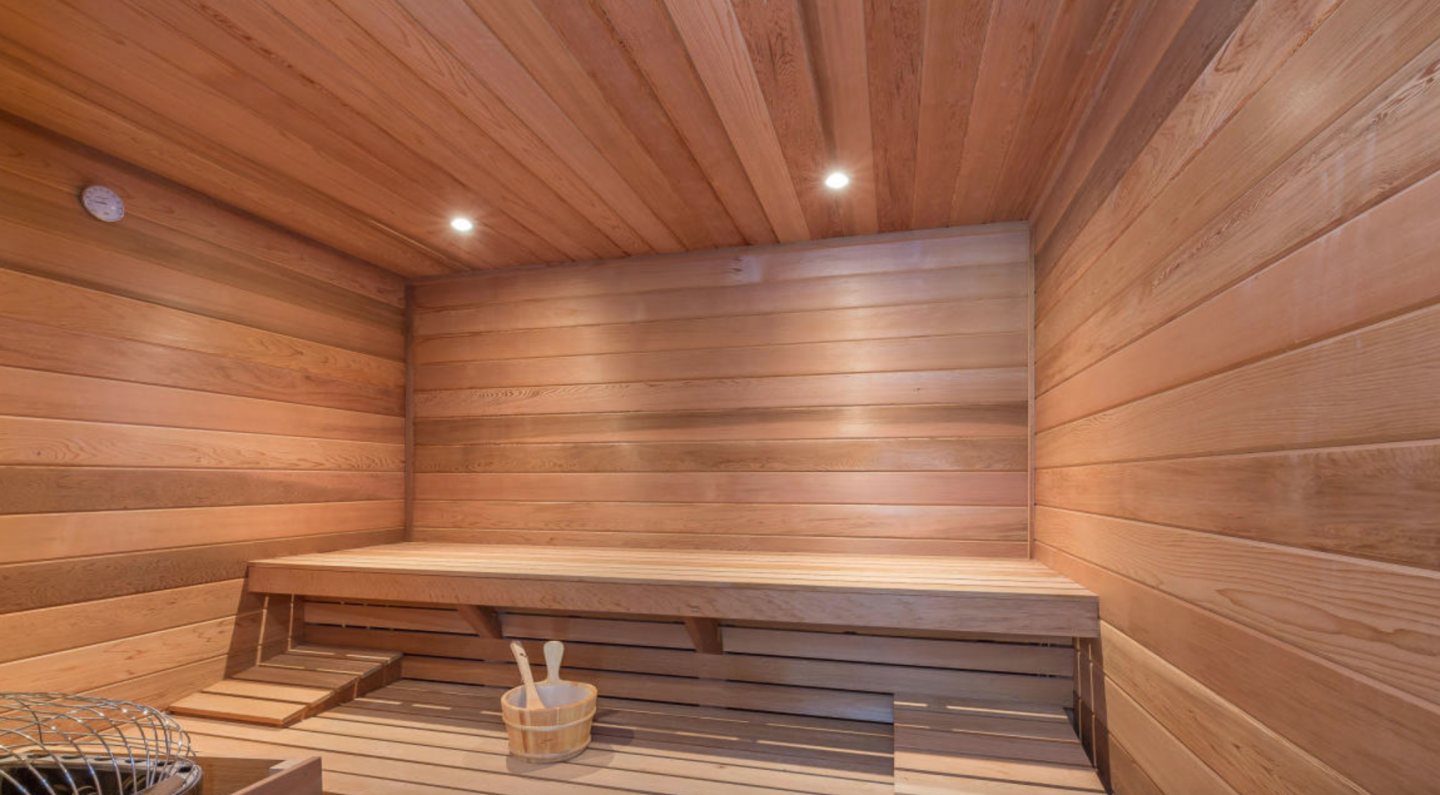 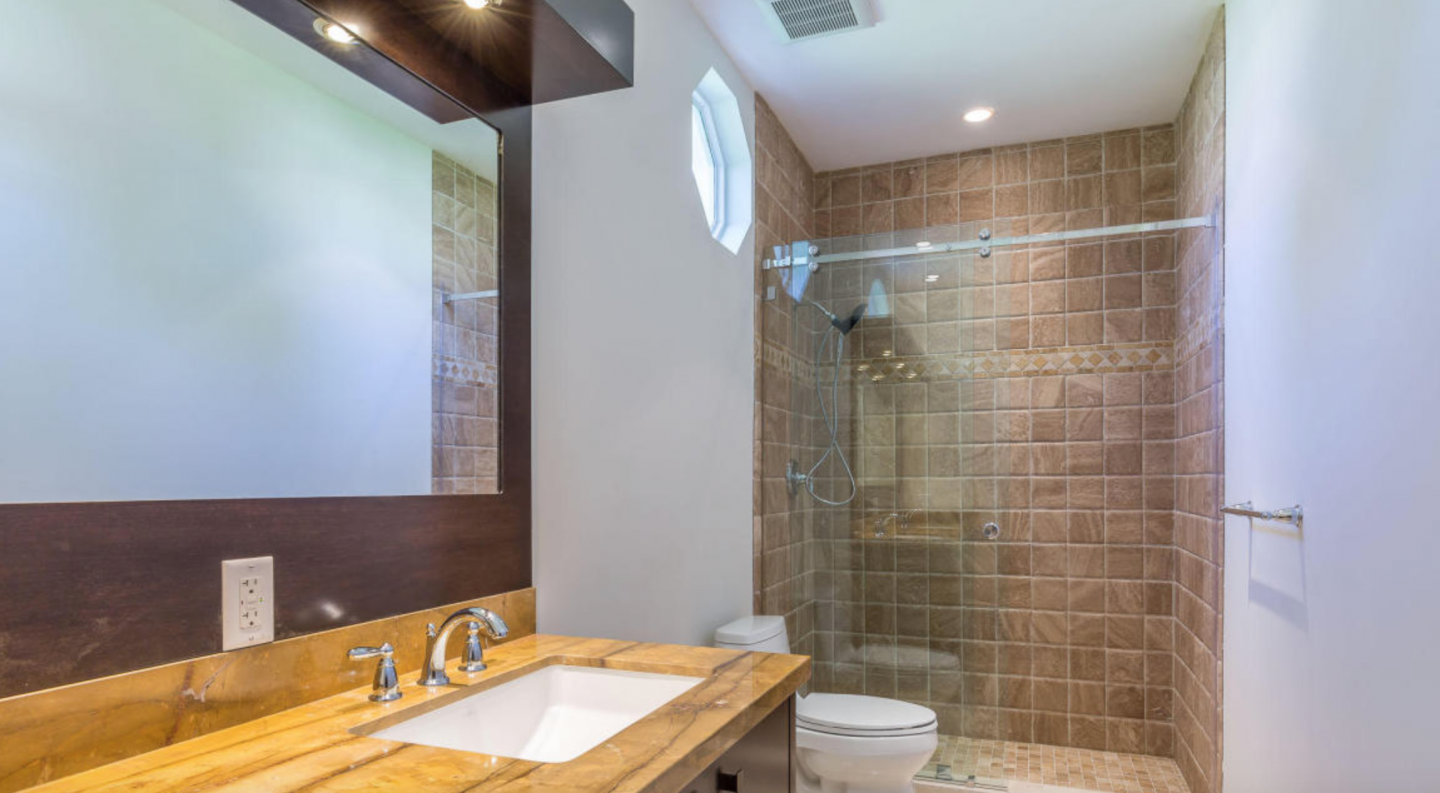 A massive exterior boasts a three-car garage, a 800-square-foot pool, a Jacuzzi, a covered deck, a huge second-floor patio, an outdoor shower, and an outdoor kitchen—all flanked by gorgeously tall palm trees. JPP’s friends, family, or even teammates can crash in his two-bedroom, one-bathroom guesthouse with a kitchen, where they can fire up the grill.

Not bad for a 26-year old Florida native who spends six months a year chasing down mobile quarterbacks like Tony Romo and Robert Griffin III—primarily in the cold, windy New Jersey Meadowlands. The 6-foot-5, 278-pound sack-master is known for his unusually long arms, but his reach apparently extends beyond the gridiron. Listing agent Lawrence Weisberg of Agency Luxe admits the extensive house remodeling was executed exclusively around No. 90’s ideas and interests—namely entertaining people and closet space for his large sneaker and hat collections.

Weisberg, who compared the home to a new construction, told Realtor.com, “I don’t think there’s any original house [left] in there.” 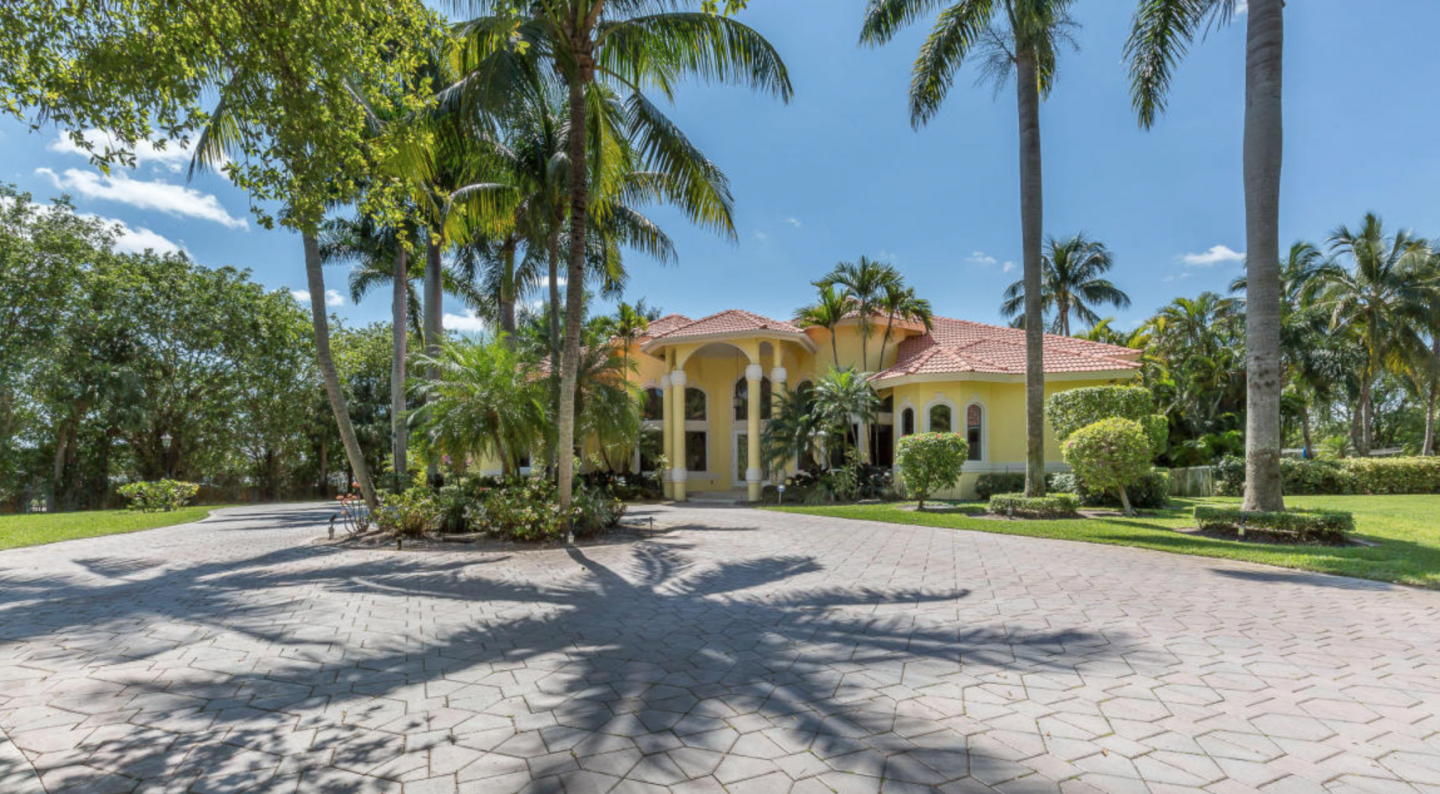 Countless palm trees grace the spacious exterior the one-acre estate, which is listed for nearly $2 million. 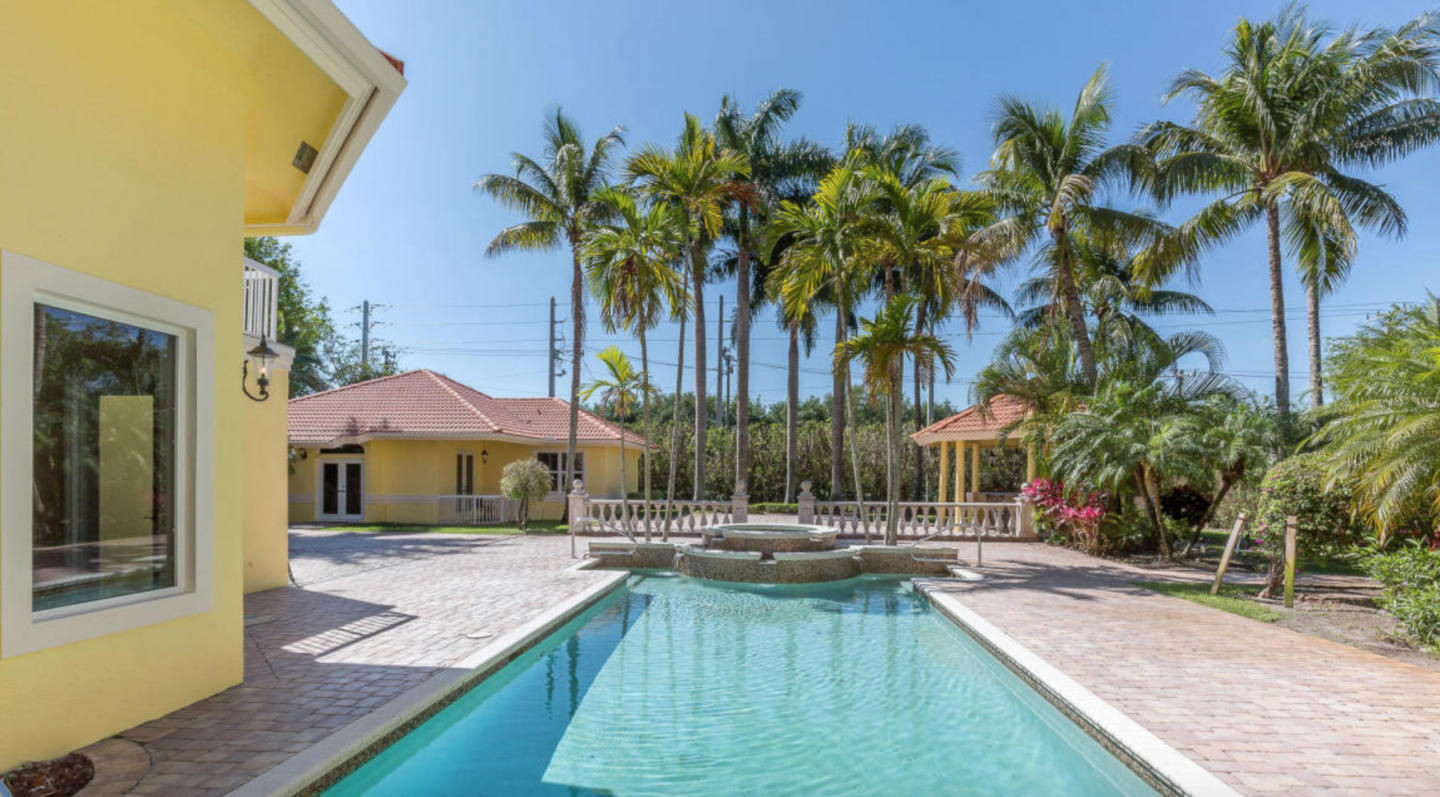 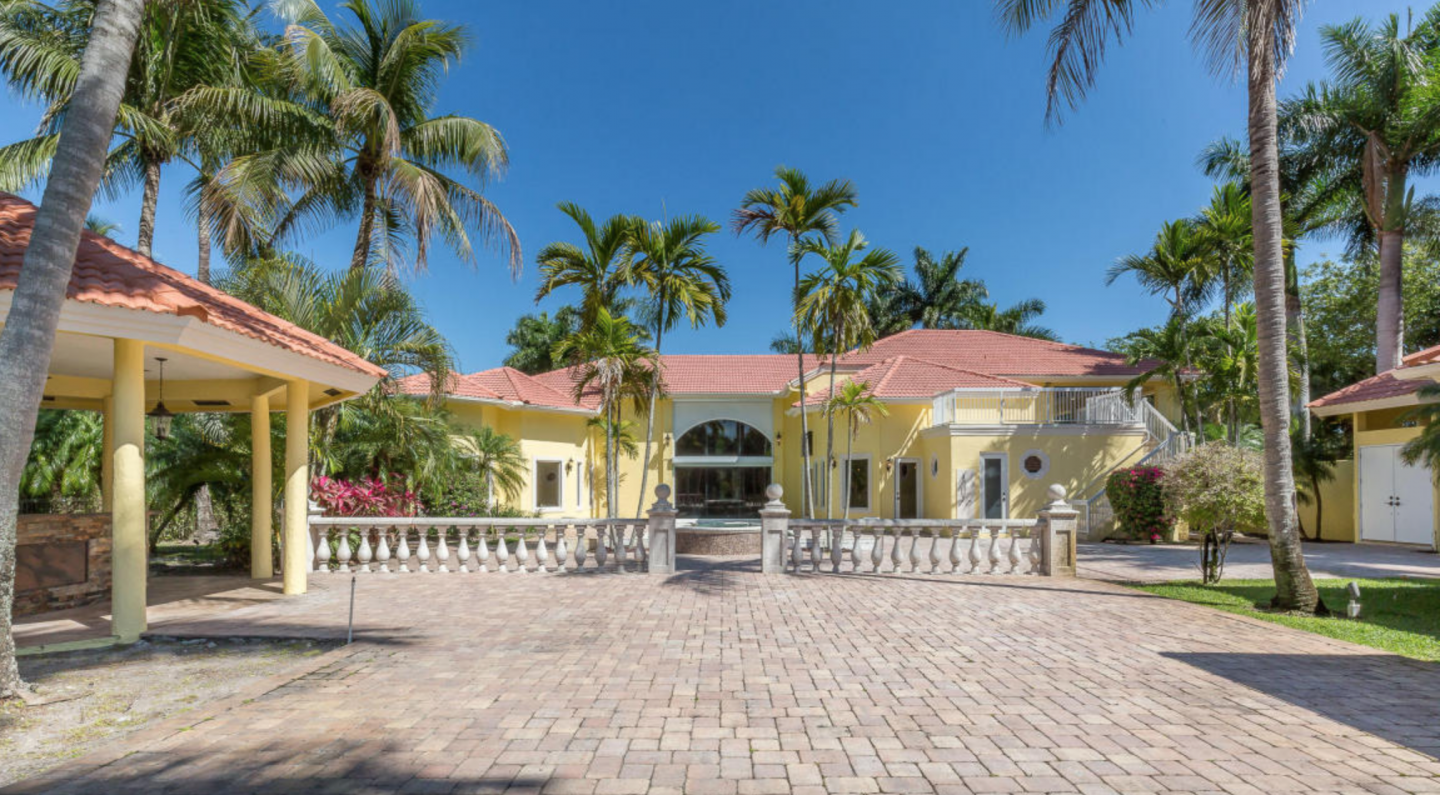 The estate totals 6,861 feet, including the guesthouse. 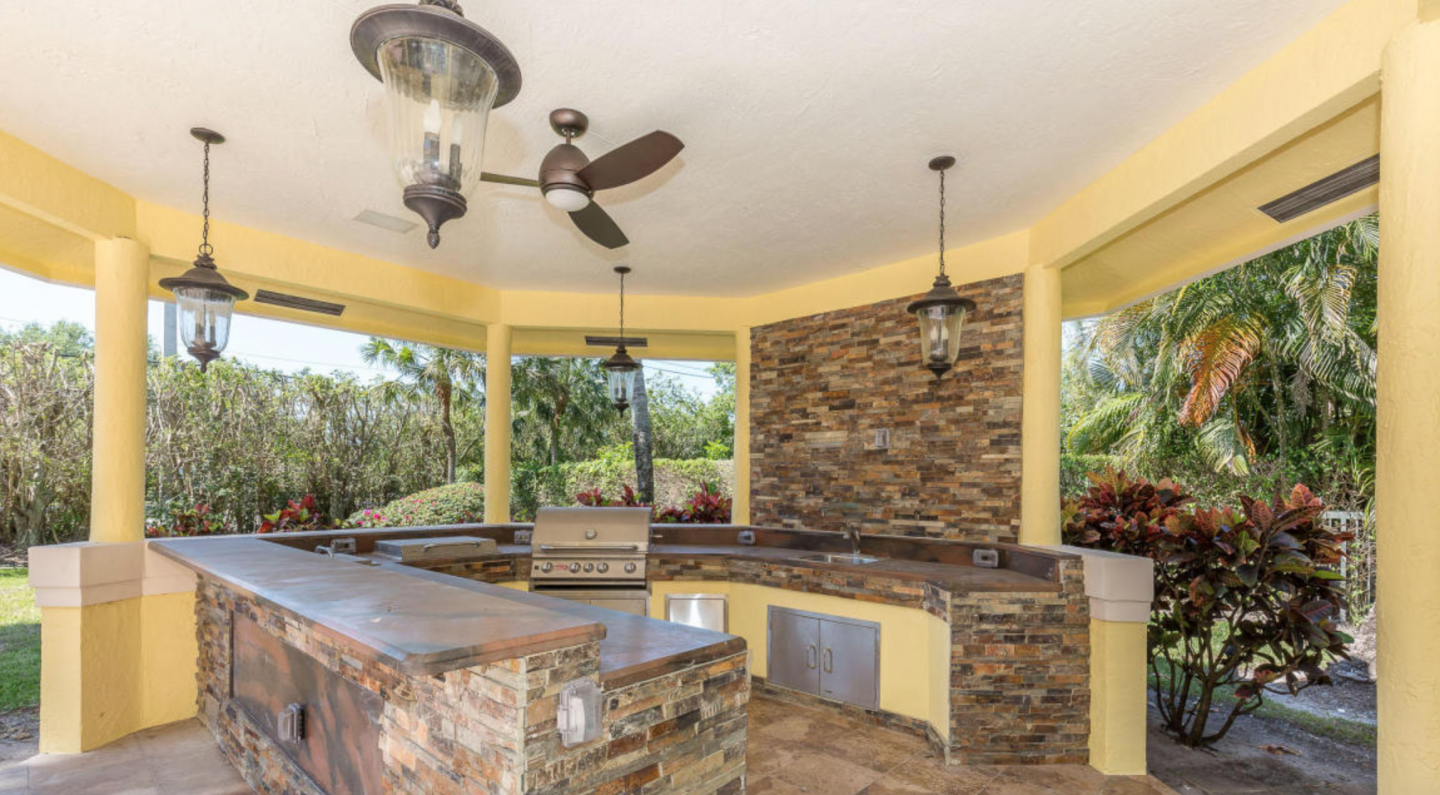 Why sell soon after pouring so much time, effort, money, and concrete into the long renovation (after all, flipping the property could have been a lot easier)? Pierre-Paul played in contract limbo, and until recently, he wasn’t sure which team he’d play for in 2015-2016. In March, the Giants franchise tagged him (an NFL team option for retaining elite, indispensable players who are eligible to become free agents). The franchise tag tradeoff means JPP will earn $14 million next season (a hefty raise, for at least one year). He could easily sack another home and renovate again with that much dough in his pocket. 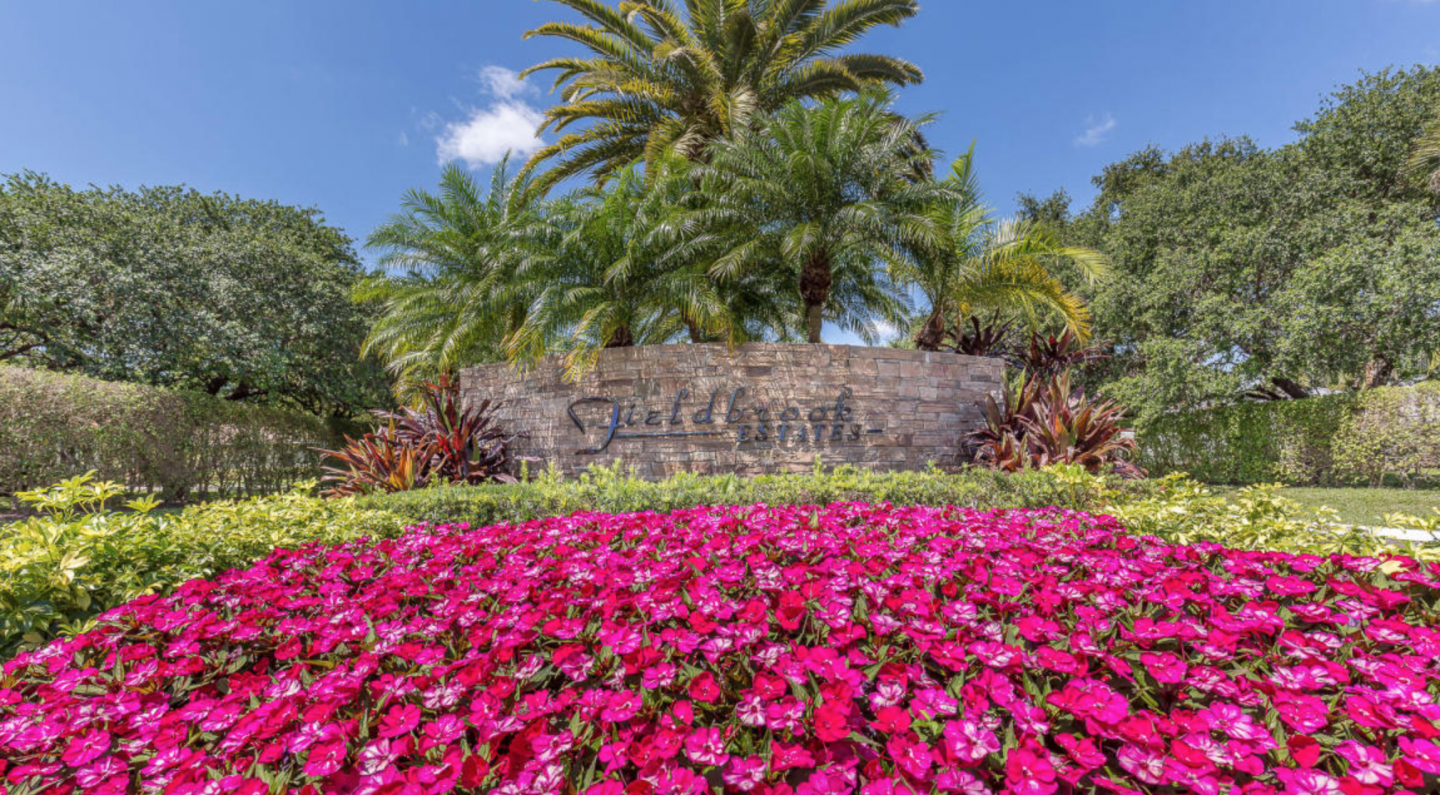 The home is located in Fieldbrook Estates, a gated community of Mediterranean-inspired homes and exclusive country clubs. 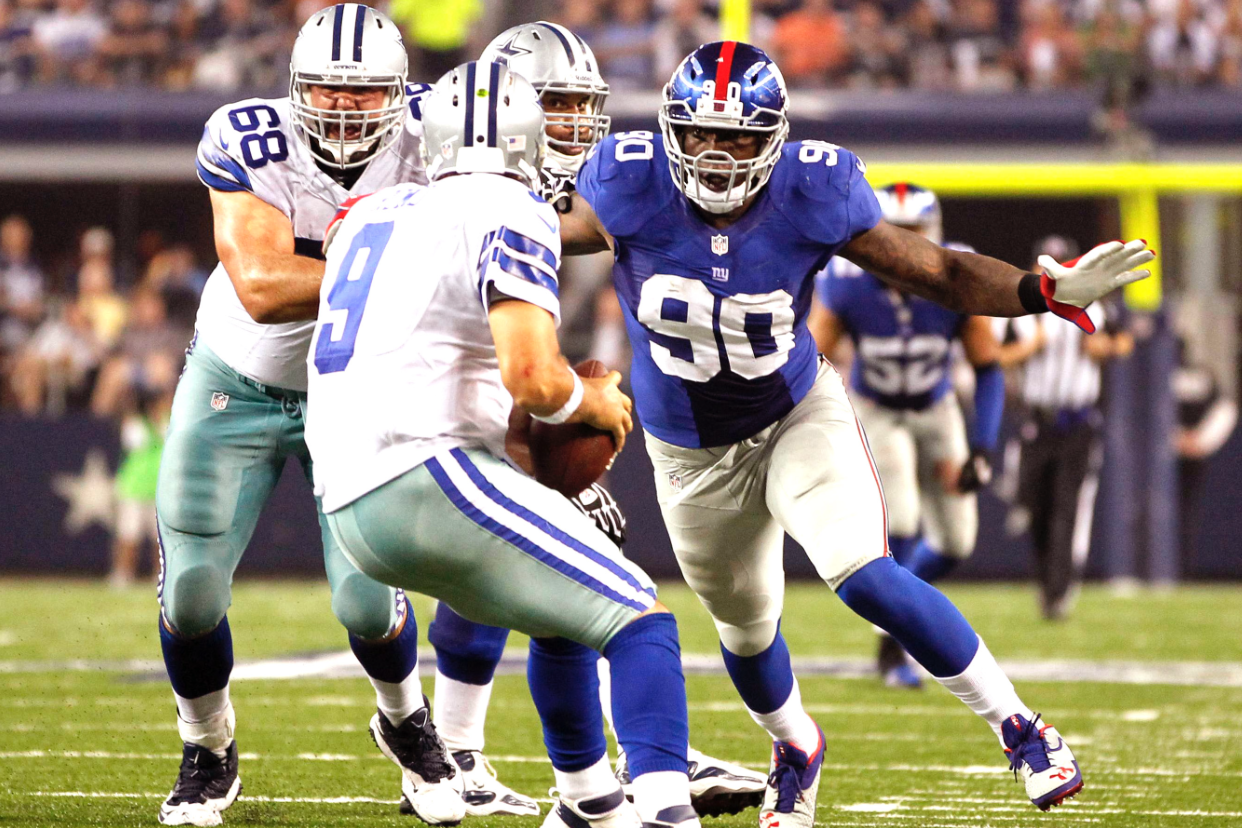 Jason Pierre-Paul in his element, about to sack Dallas Cowboys quarterback Tony Romo.

So it’s back to New Jersey for now. All JPP needs is a Boca Raton buyer to justify his interior moves off the field. We already know how he’d tackle such problems on the field, especially if they attempt to throw a football. Besides, a $14 million salary is more than enough sunshine—even if the Meadowlands remains your home field.