One Thousand Museum, A Towering Legacy By Zaha Hadid Architects

Striking and sensuous, One Thousand Museum will be Miami’s most expressive high-rise––idolized as Zaha Hadid’s first skyscraper in the Western Hemisphere, as well as her final arresting masterpiece.

Rising 62 stories in downtown Miami, with dramatic, voluminous curves in its architecture, the tower, overlooking Museum Park and Biscayne Bay, is projected to be groundbreaking for the city’s high-design residential market.

Hadid, who, at 65, died in Miami of a heart attack, conceived the project’s comprehensive design. It was already under construction before her death in March of last year.

“We have the same team that was involved in the design overseeing the construction to ensure the original vision for the project is carried out to preserve the integrity of Zaha’s legacy,” says Louis Birdman, co-developer for the project, along with Gregg Covin.

An artist’s eccentric sculpture, as much as it is an innovative residential tower by Zaha Hadid Architects, One Thousand Museum, with an anticipated 2018 completion, is poised in the city’s cultural center, near the Pérez Art Museum Miami, the Patricia and Phillip Frost Museum of Science, the Adrienne Arsht Center for the Performing Arts, and American Airlines Arena.

“One Thousand Museum’s structure is expressed as its primary design feature,” Birdman says, adding, “…Its organic forms seem to grow out of the earth and reach skyward to the top of the tower,” perhaps imitating an exotic organism erupting from the ground. Behind the curvy exterior, a crystalline glass façade softens the structural silhouette.

The shape is molded by over 4,8000 pieces of prefabricated glass fiber reinforced concrete panels, which were shipped overseas from Dubai over a period of 18 months. Birdman notes, “The design of these panels is based precisely on Zaha Hadid Architects’ 3D model… This system has never been used in this manner for a structure of this height, making it the first of its kind in the world.” 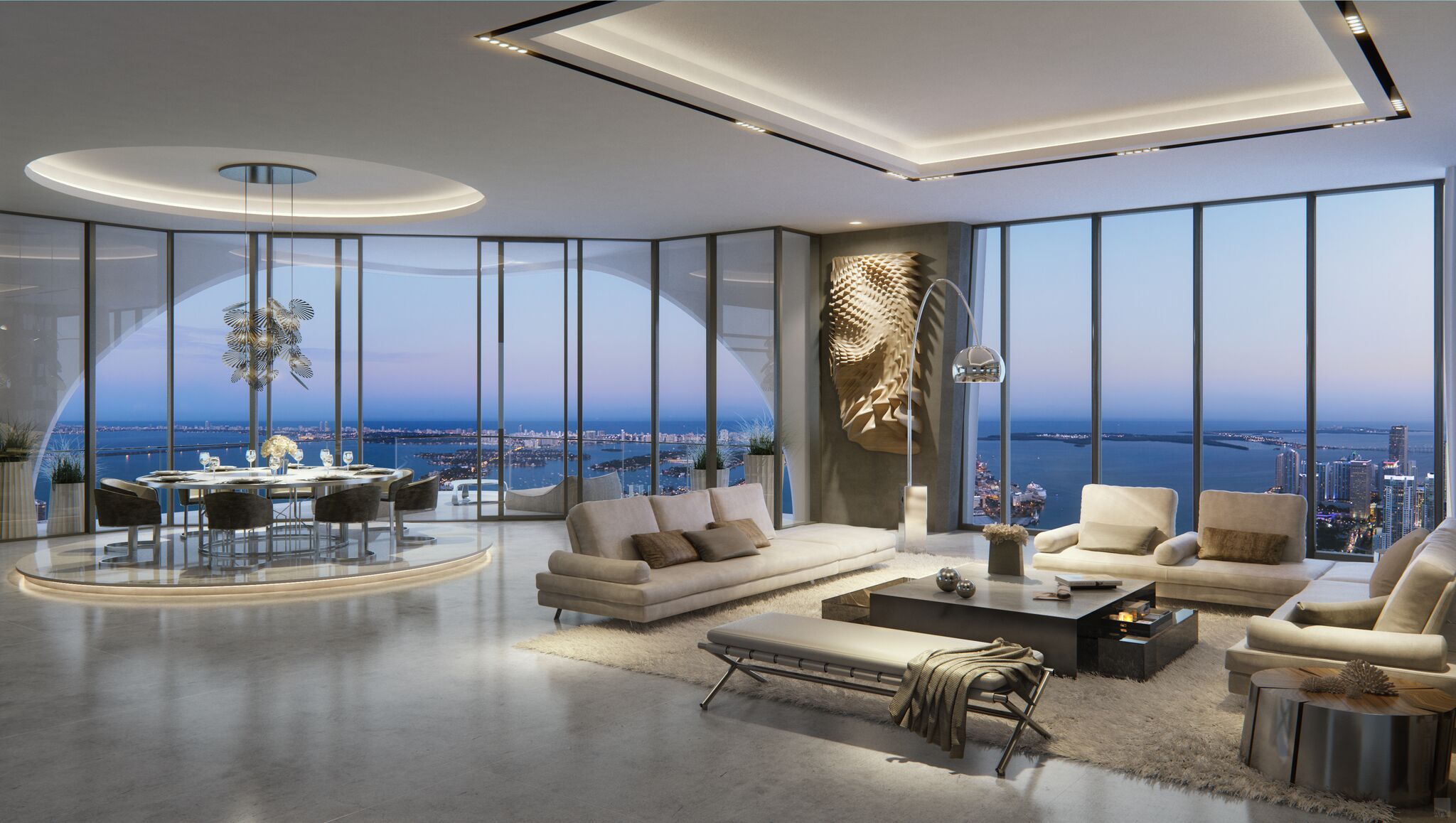 Minimally designed with European finishes and fixtures, every kitchen is equipped with high-performance appliances and custom cabinetry. Bedrooms feature Italian-designed closets, crafted for superior storage functionality. Additionally, all doors throughout the residential interiors have been customized by Italian furniture brand, Lualdi Porte, with Valli & Valli’s Duemilacinque Series handles by Hadid. 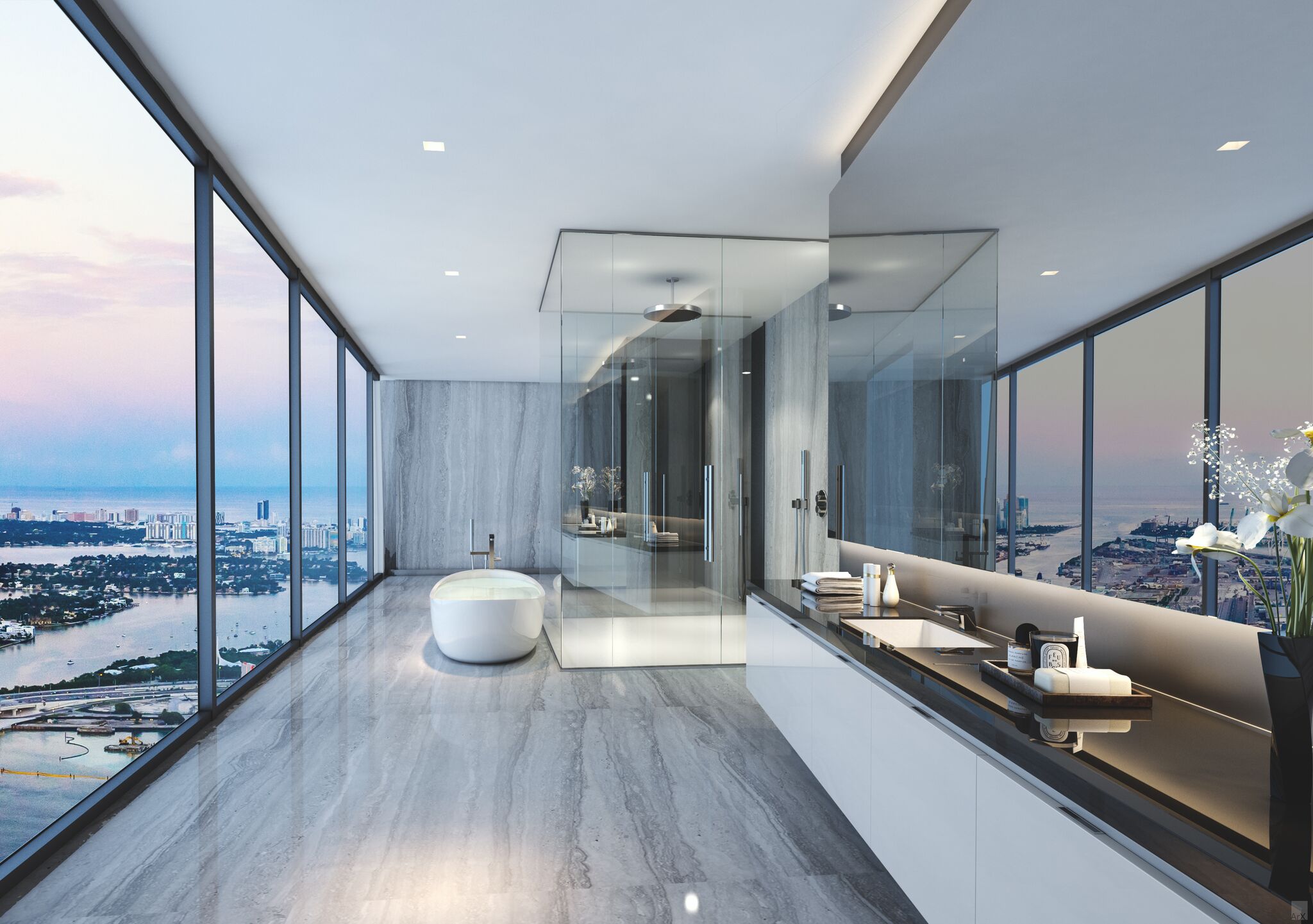 Arched walls patterned as water droplets within the crown of the structure enclose both the double-height Aquatic Center, with an infinity-edge indoor pool and a sunbathing terrace; and the Sky Lounge, a venue suitable for casual socializing or ritzy private events.

An aesthetic extension of the tower, the Sun & Swim Terrace is sculpted with areas of natural light and shadow that shift around organically shaped pools throughout the day. 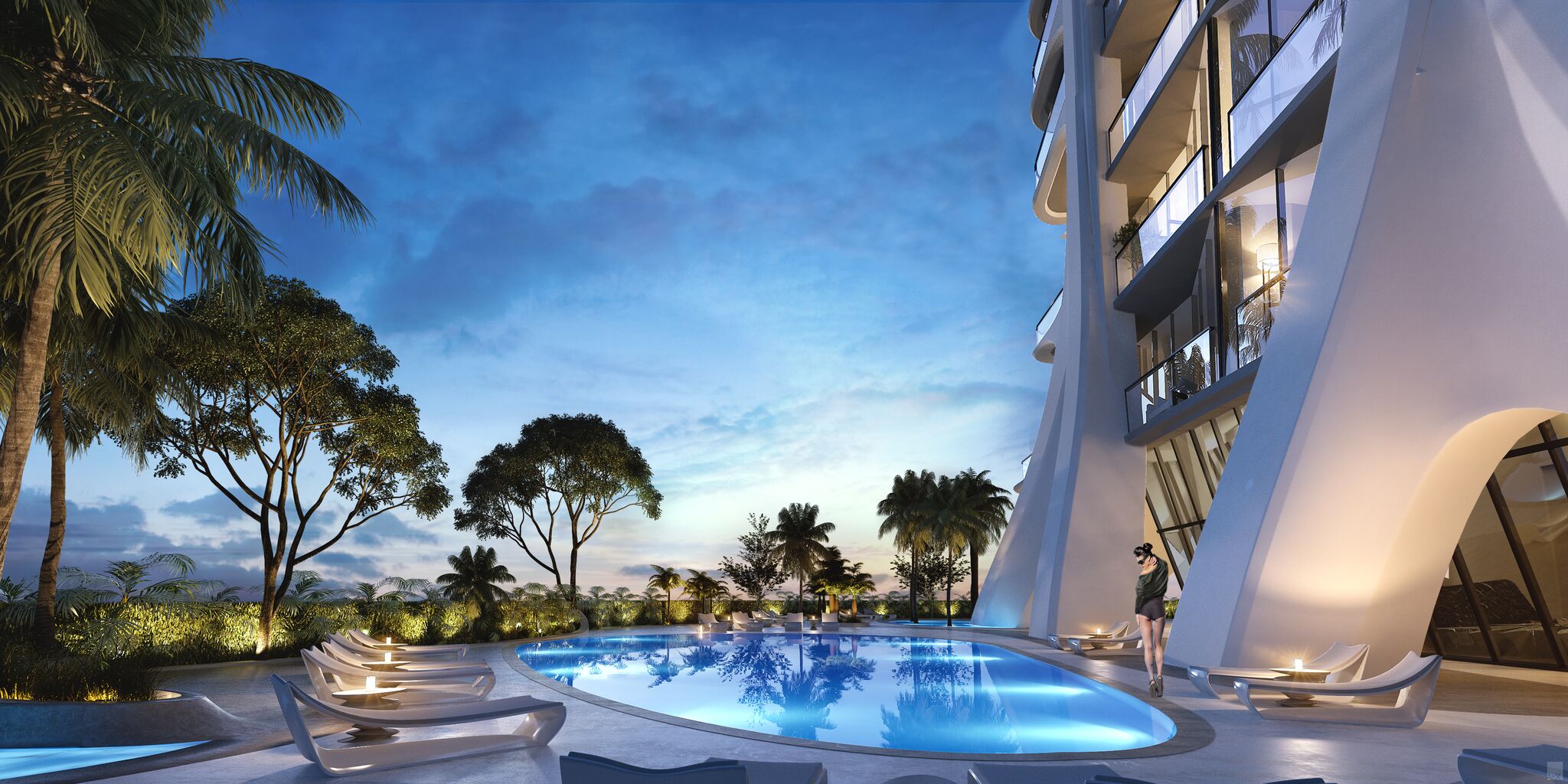 Opening onto the Sun & Swim Terrace, the Wellness and Spa occupies two levels. The first floor consists of the fitness center, indoor and outdoor spaces for stretching and training, private rooms for massage and beauty treatments, steam and sauna rooms, plunge pools, and a relaxation lounge; while a multimedia theater is located on the second floor.

At the top of One Thousand Museum will be Miami’s first private helipad on a residential tower. Still pending FAA and other necessary approvals, it will allow residents the convenience of arriving and departing on their own schedule

“One Thousand Museum looks to deliver the highest quality lifestyle to its future residents,” Birdman says, and it doubtless achieves that with over 30,000 square feet of lavish communal spaces that embody Hadid’s design principle of form follows function.

Glorified among the world’s most brilliant designers, she achieved a reputation for fabricating futuristic, fluid architecture, amounting to her triumph as the first women to receive the Pritzker Prize in Architecture (2004)––and uncommonly, such illustrious recognition in the industry––in addition to countless other notorieties in her lifetime. 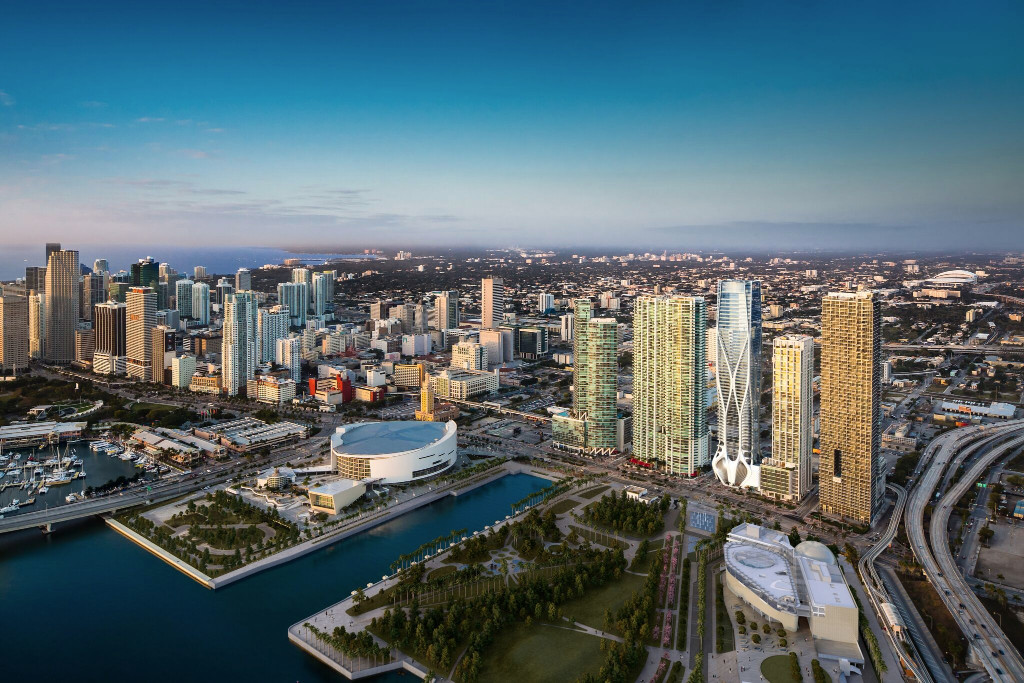 Hadid’s pioneering edifice, erected across the Bay from her former residence at the W South Beach, has continued its ascension through the Miami skyline, very much akin to what she envisioned––an artful, daring design seen through by her ingenious prodigies at Zaha Hadid Architects. One Thousand Museum will stand as a tremendous masterpiece for the field of architecture, and furthermore, a towering tribute to the late starchitect’s legacy.

This story is featured as the cover in the Summer/Fall 2017 issue of Haute Residence magazine. 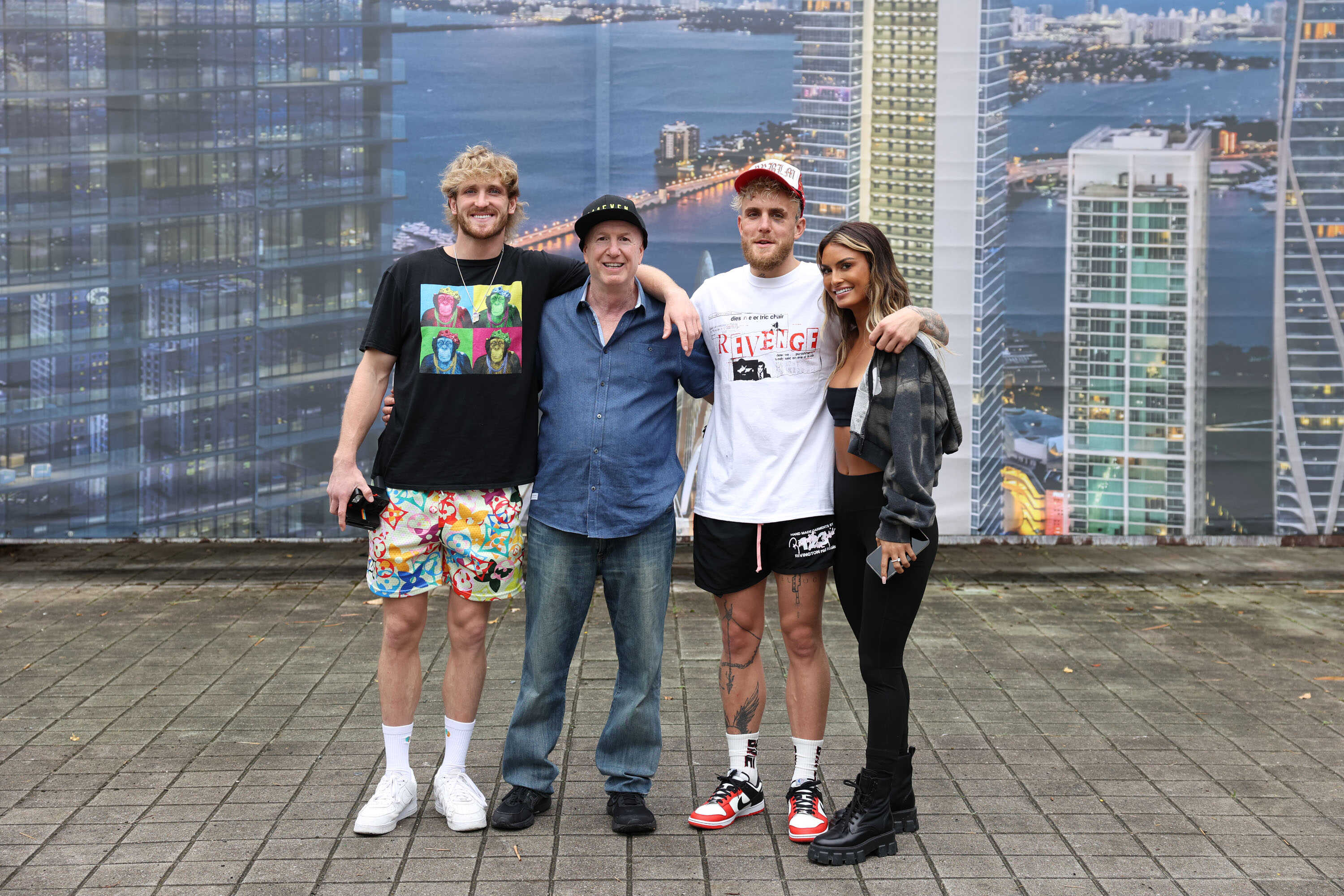 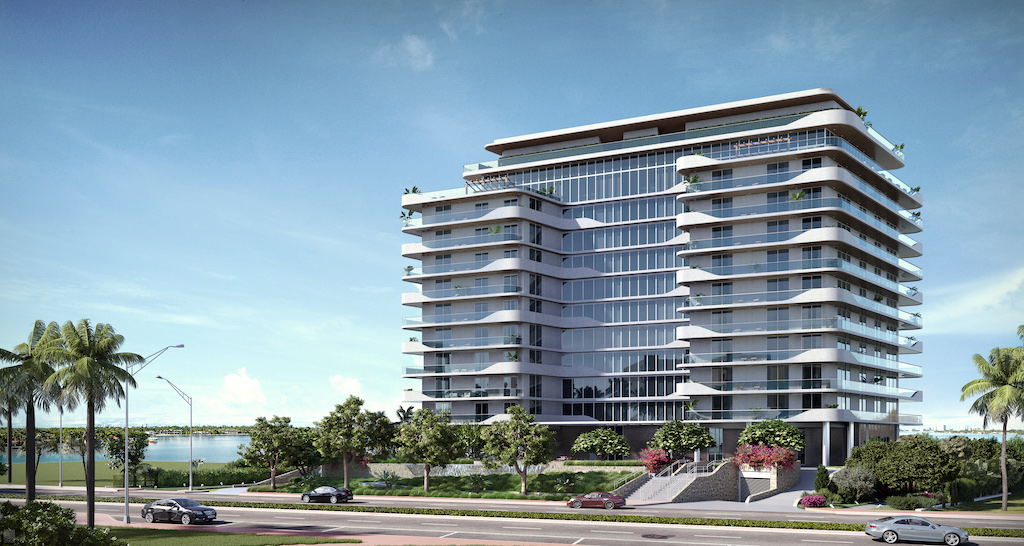 Openings On The Horizon: Monaco Yacht Club & Residences Welcomes Back The International Jet Set As It Swiftly Sails Toward Completion

Nov 20, 2021 / Comments Off on Openings On The Horizon: Monaco Yacht Club & Residences Welcomes Back The International Jet Set As It Swiftly Sails Toward Completion