Two decades ago, Karim Rashid launched a design practice with a very broad–yet simultaneously narrow–vision. He sought not to focus his creative energy on any particular aspect of the industry, but instead on multiple avenues, in hopes of fulfilling a clear, singular dream: to influence all aspects of daily life through his artistic craft.

Highly intrigued by the physical world, Rashid boldly set out to master nearly every fathomable sector in his trade, including graphic, jewelry, interior, architectural and technological design, in order to explore and influence the way physical material shapes everyday experiences. 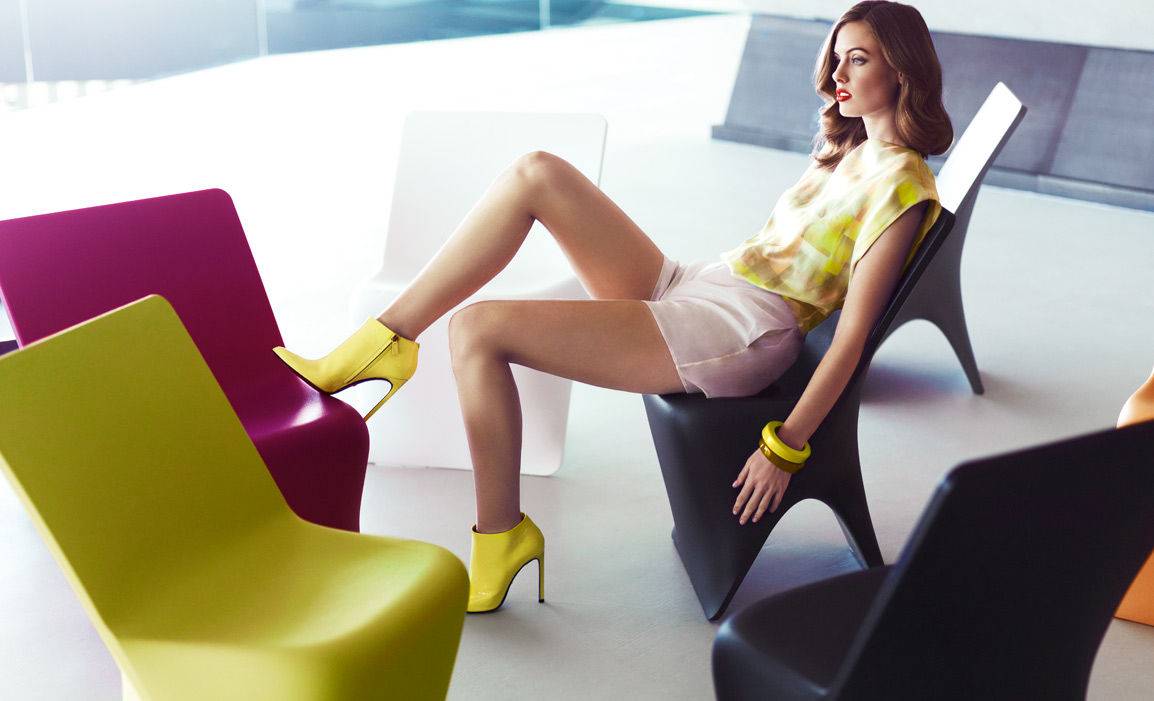 The renowned artist has since outlined the creation of a wild assortment of things–from small-scale objects like office desks, laptops and (award-winning) vodka bottles, to grander creations such as furniture, residences and hotels–and has collaborated with a long list of luxury product companies in his storied career, including Prada, Kosta Boda, Orrefors, Davidoff, Veuve Cliquot, YSL, Giorgio Armani, Issey Miyake, Estee Lauder and Cappellini.

The eclectic designer is currently working on variety of ventures across the globe, including a condominium in Latvia; three hotels (one in Germany, one in Malaysia, one in Israel); and four residential buildings in Manhattan (in partnership with Israeli developer, HAP). The Canadian native also has a high-end, advanced mobile phone in the works (which, he confessed, is unfortunately still too nascent for him to divulge much about), and is in the process of planning a bevy of interiors worldwide (among them, a dental clinic in his homeland). 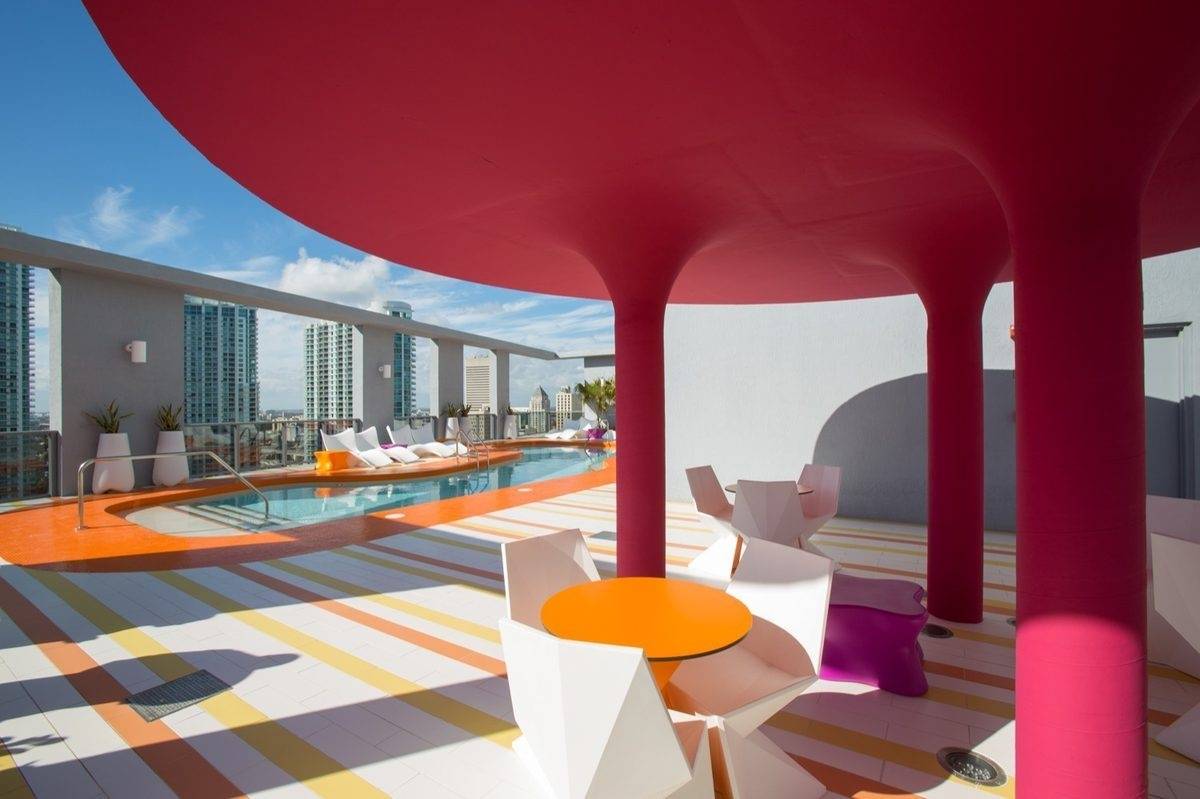 Though some may call him “kooky” for his outrageous, techno-morphic flair, we’d like to consider Rashid–whose work has been featured in art institutions all over the world, including the MoMA and Centre Pompidou–a passionate innovator who simply dares to push the envelope and think outside the norm (albeit to an unparalleled extreme).

Eager to peek into the mind of the seasoned jack-of-all-design-trades, we probed the eccentric craftsman on his personal aesthetic, unique source of inspiration, and thoughts on the potency of design in the modern world. 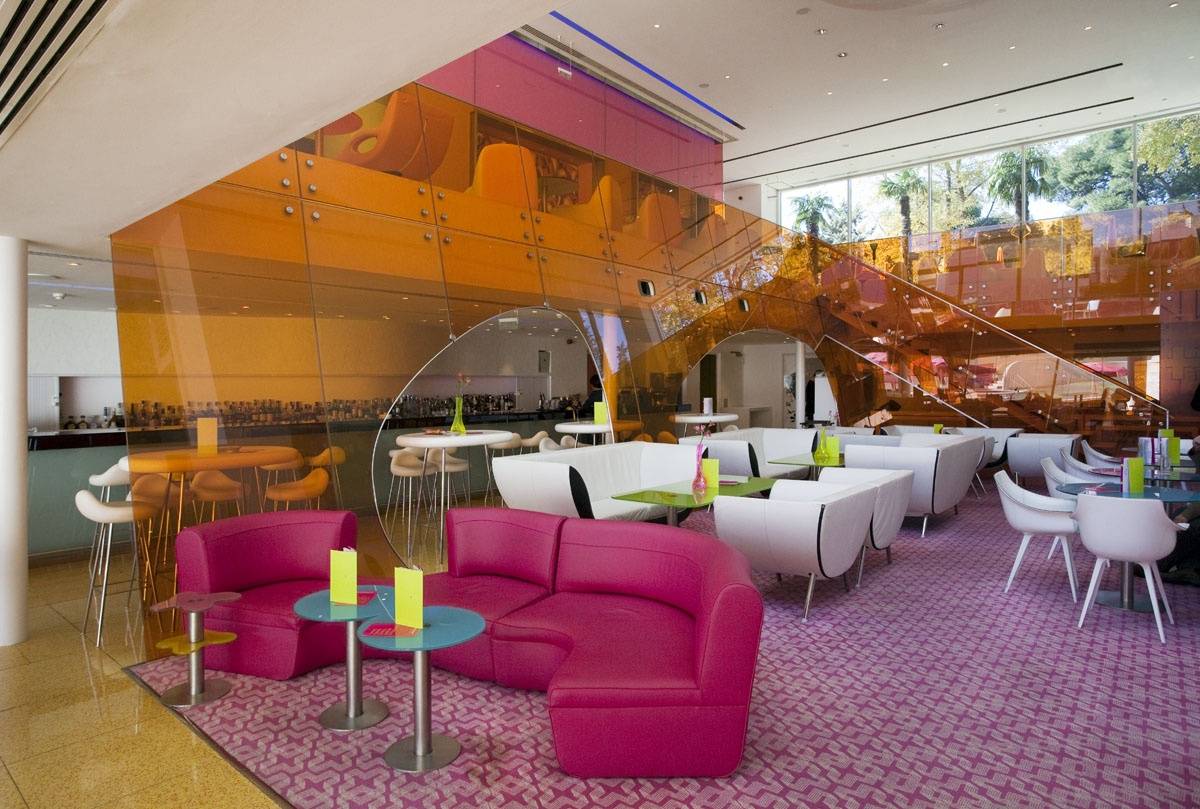 Your work has often been described as “funky” and “futuristic.” Do you agree with these labelings? In your own words, how would you define your personal aesthetic?

It’s not futuristic because it exists now–it’s present! What I try to do is bring some heightened, emotional experience into one’s life, to elevate a moment and make one feel more alive through inanimate things. I always wondered if design could touch you emotionally, like a film or music can, because it’s a different type of art form. Can I design something that makes a positive emotional feeling? That’s really my underlying goal: to make things more human. Technology and products themselves can be very dehumanizing and just utility-driven. Can I make you break out into a smile or make you feel more comfortable, or provide you with a more engaging experience? Can I make your life simpler and more relaxed? Can I make an object to destress you and rather than stress you? Those are the questions I try to ask myself.

Is that why you use many colors in your work?

I would say yes–color is very emotional. It has a huge impact on us. I’ve been using a lot of color for a very long time, and the world was pretty gray up until the last few years. If I had one percent to do with it [becoming more colorful], I’m thrilled! Now you can buy yourself a digital camera in ten colors. I love that consumers are now embracing color. In architecture, we’re finally starting to see examples of facades that are beautifully colored, and colored glass around the world. It’s a new energy–one that makes us feel better. 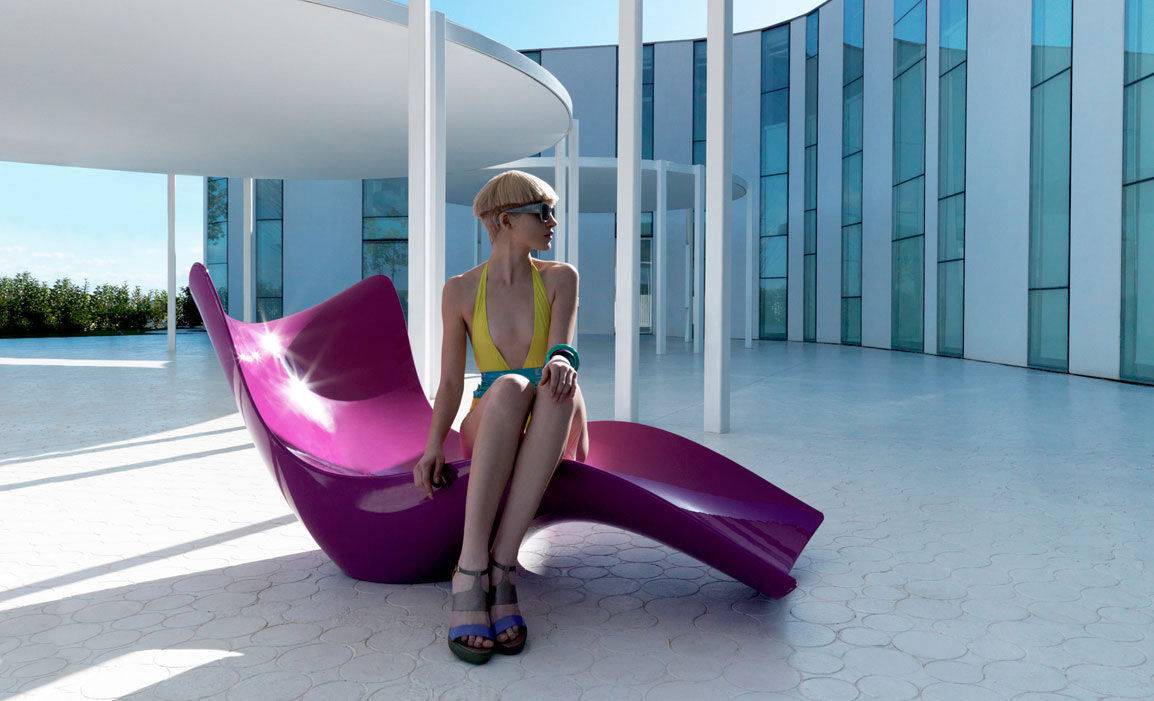 You have expressed in the past that the digital/information age has been a key source of inspiration for your designs. How so?

I’m inspired by three different aspects of the digital age–first, I’m inspired by the software and the tools that I have. They allow me to do things that could’ve never done before in history. Second, I’m inspired by the digital age’s language, [as I ask myself], if the digital age has a language today that never existed before, what is it? When we look back at periods of language–at say, the Baroque period, or the Belle Epoque period, or Modernism–they were all very much based on the technologies of that era. Today’s digital age is interesting, because the technologies of today are actually immaterial. The digital age is about “nothing”; it’s about immateriality. So I asked, “What would the material world look like if it’s in unison–if it’s working with and mirroring–this immaterial world?” That forced me to try to find and create new, “visual languages.” 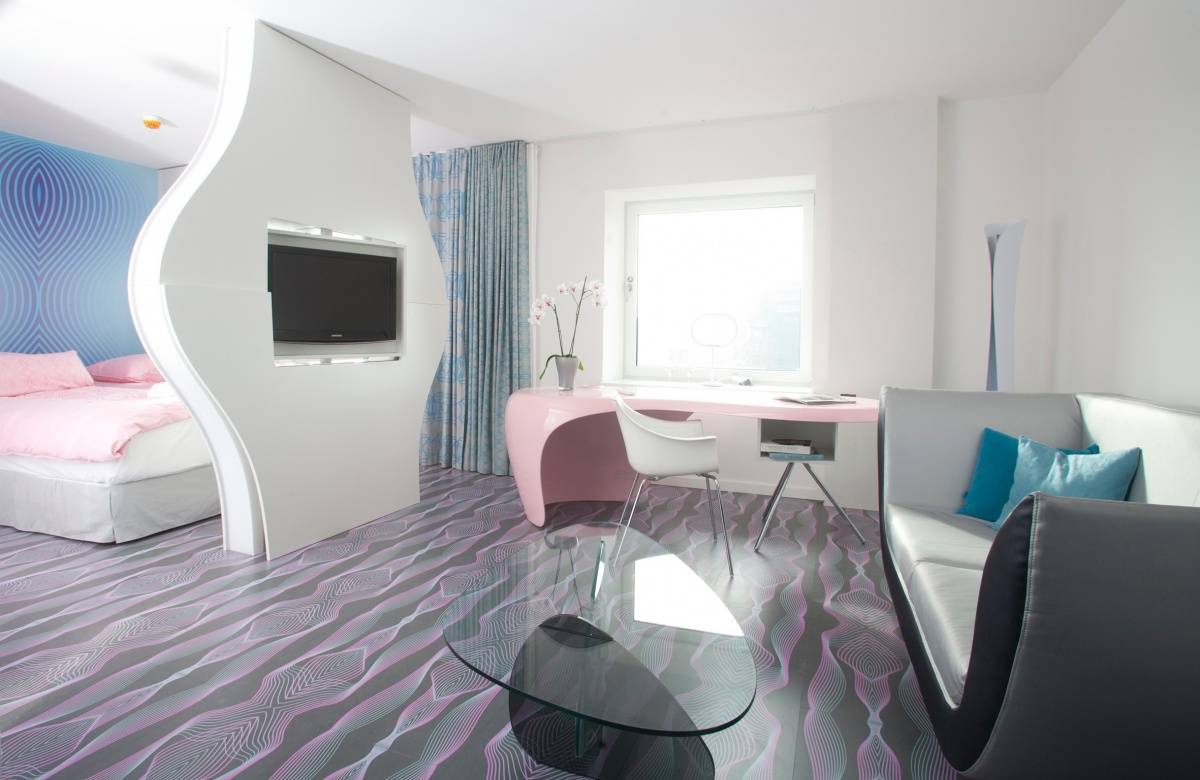 Have you incorporated any intriguing materials or elements into your products?

Many, many, many things–I don’t even know where to begin!

In a lot of the buildings I’m working on now, I [try to use] interior materials–claddings–that are more efficient and smarter. For example, the flooring that I put down in my office, in the 400-room Nhow Hotel in Berlin, and now in some of the condominiums [I’m designing] in New York is a 100% biodegradable wood, a sawdust that has been created into a panel. The panels–which are made in Germany–are quite large and interlock, making them so simple to install.

The nice thing about the technology is that I can make a print that is totally biodegradable in any color or pattern that I want, so in turn I can make floors look really alive . . . using a completely self-sustainable product. I make different patterns to speak about the digital age, to look like data and information, energy, and 3D. Every time I have a 2D surface, I try to make it look optically 3D, because I think the digital age has [produced] a really dimensional world, [one] that’s far beyond 2D. When I started design in the analogue age, we were designing everything in 2D, but now that I work with 3D softwares, I don’t look at anything in 2D anymore. In turn a lot of the decoration and embellishment that I do [taps into] the 3D world. 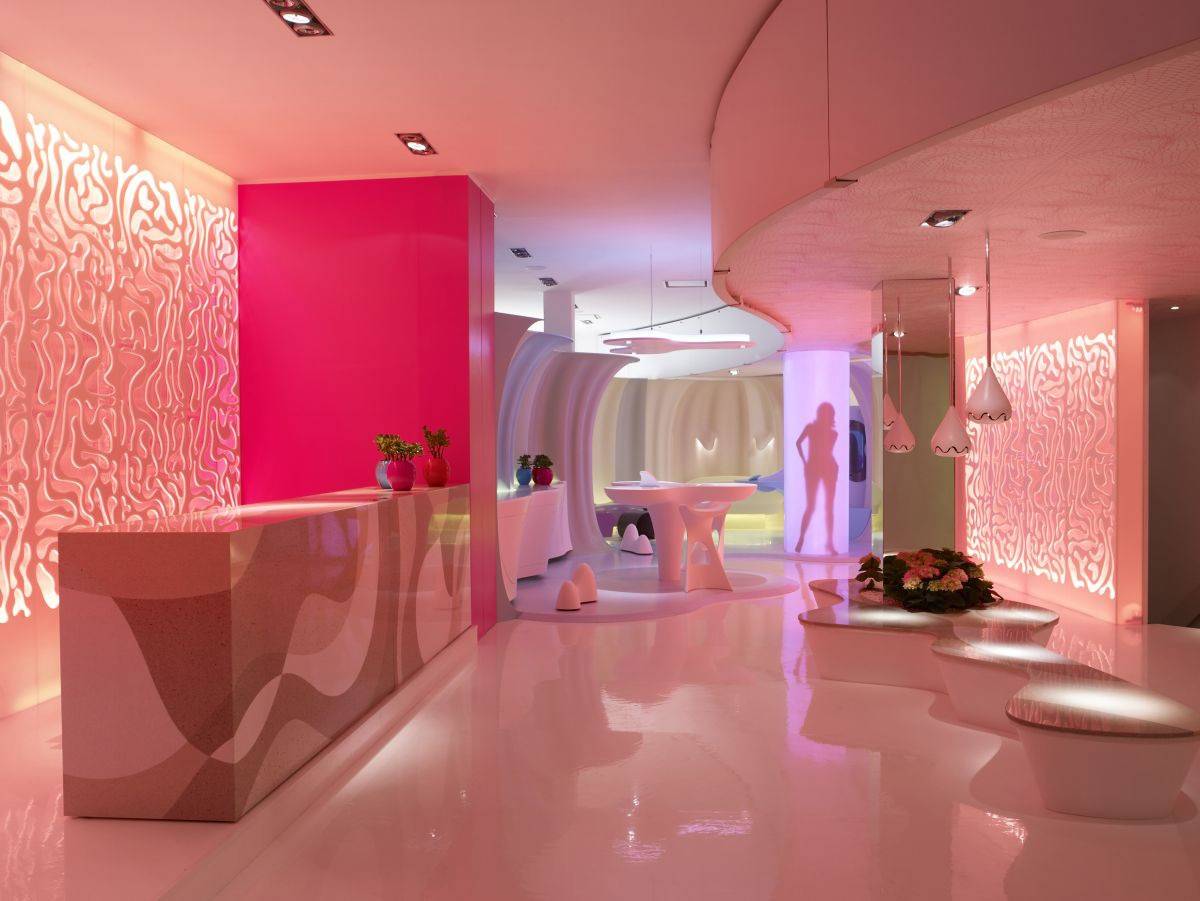 [I also work with new types of] glass, polymers and plastics. I made a chair that I just showed in Milan; it’s made of biodegradable plastic, made from a Chai fruit in Brazil, instead of a material like polypropylene or polyethylene [that is derived] from oil. We can now make plastics that are very high-performing [without oil-based materials], so I’m trying to use a lot of those plastics now.

Is sustainability one of your key aims?

It’s not right on the top of my list, only because a lot of the time when you work for companies, they’re the ones who [determine] what material is going to be used. If a company asks me to make chairs with polycarbonate material that is are derived from oil, it’s very hard to convince the firm to change the material [in order to] produce goods in a way that is more responsible–believe me, I’ve tried! I try to steer them towards what I think are the right plastics to use, [ones] that are more environmental.

I was brought up with the notion of being [environmentally] responsible–I didn’t know what it was like to be wasteful. [Back when I attended] university in Canada 40 or so years ago, I was taught to design products that were either recyclable or regenerative; I would design something so that it could snap apart, and one part of it could go down one cycling stream, while the other would go down another. If I designed a chair, I would make the legs metal and the feet in plastic, and I had to make sure it could pop apart very easily, so that the metal and plastic could both be recycled. [Sustainability] was part of my education. Recently, I designed a water bottle that’s being produced in [an eco-friendly] plastic. 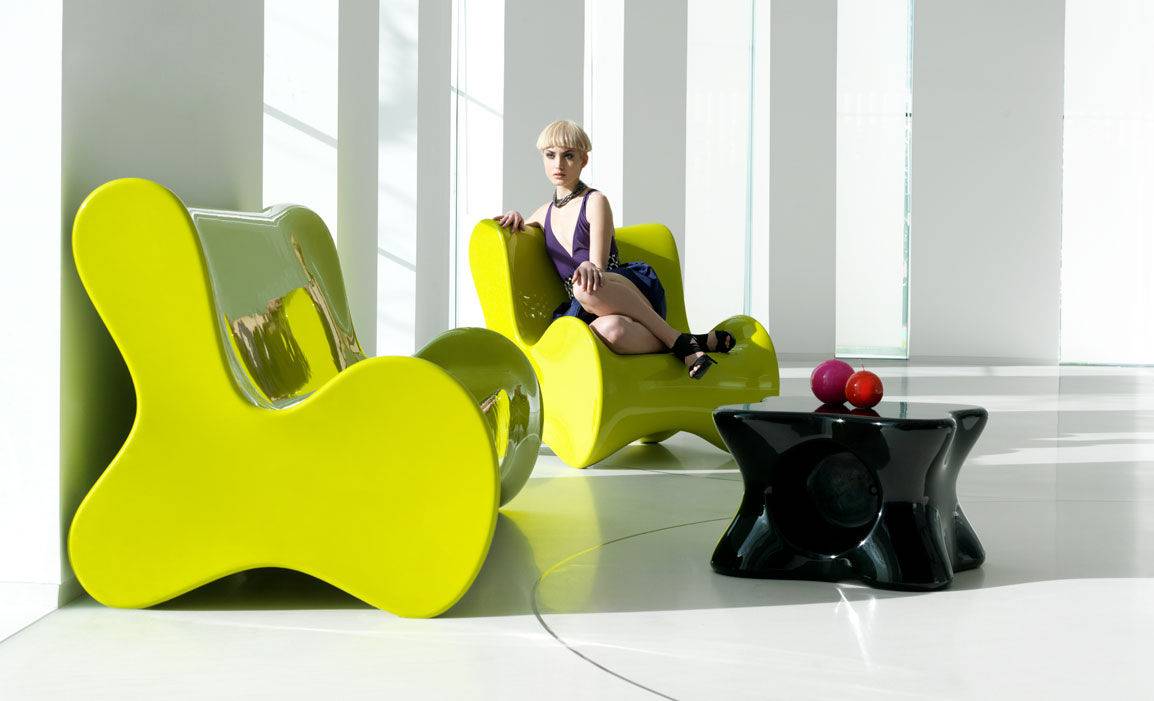 How would you define “luxury?”

I don’t see “luxury” in the cliche sense that something has to be made of impressive material, or handmade. Luxury no longer involves just physical material. For example if I had a camera and I wanted to make a high-end luxury version, I could gold-plate it, but I think now we as human beings realize that that’s not enough anymore. What would really be luxurious is if that camera had features [that made it] more seamless in its user’s life [such as intangible technological capabilities]. So “luxury” can be redefined a bit, based on the 21st Century digital view of it. I see it now as a more immaterial concept rather than a material one. 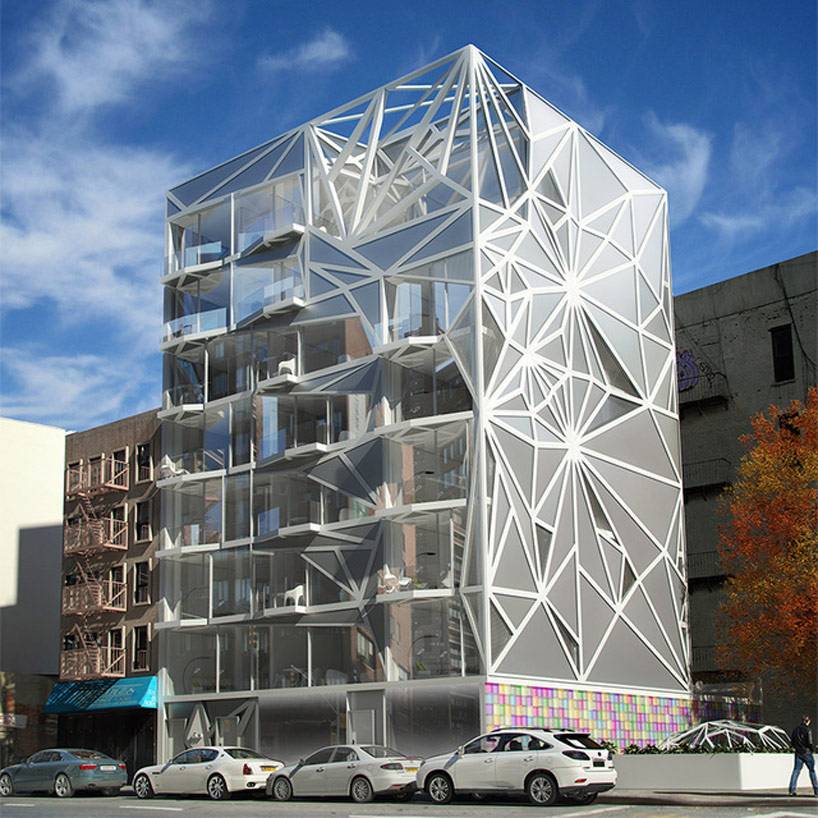 Describe the power of design, and how it impacts our everyday lives.

The popular take on design is that [designers] make cool forms, or do funky things, but the reality is every manufactured good in the world was designed, for good or bad. The generic stuff around us that doesn’t work well was poorly designed. Design touches so many daily experiences. When I was a professor teaching, I got my students to count how many objects they touch in a day, and the average number was 640. That’s what we interactive with. So of course design has a massive impact on daily life. Because the world is commodity- and capitalist-driven, design is a commercial act–we design things to sell, [which means] design has a huge impact on the economy. At the end of the day, design is good business. Design is also a way of [recording the] progress and evolution of humanity. If you pick up any object from history, like a vase from the Ming Dynasty, [it tells you] so much about the time, the social life, the milieu of that time. These things are designed to document human existence and history. Design really shapes human culture.

What is your ultimate aim as a designer?

Sometimes I realize that philosophically, my intention is similar in all these projects: to really shape the future. What I mean by that is be really cognizant of the present. The technologies, production and construction methods of today shape [my work], which in turn I hope will affect [mankind positively] in the future. I’ve always believed that design is really about moving us forward. It’s not about looking at or copying the past. It’s not about style. It’s about making a better world and a better life. 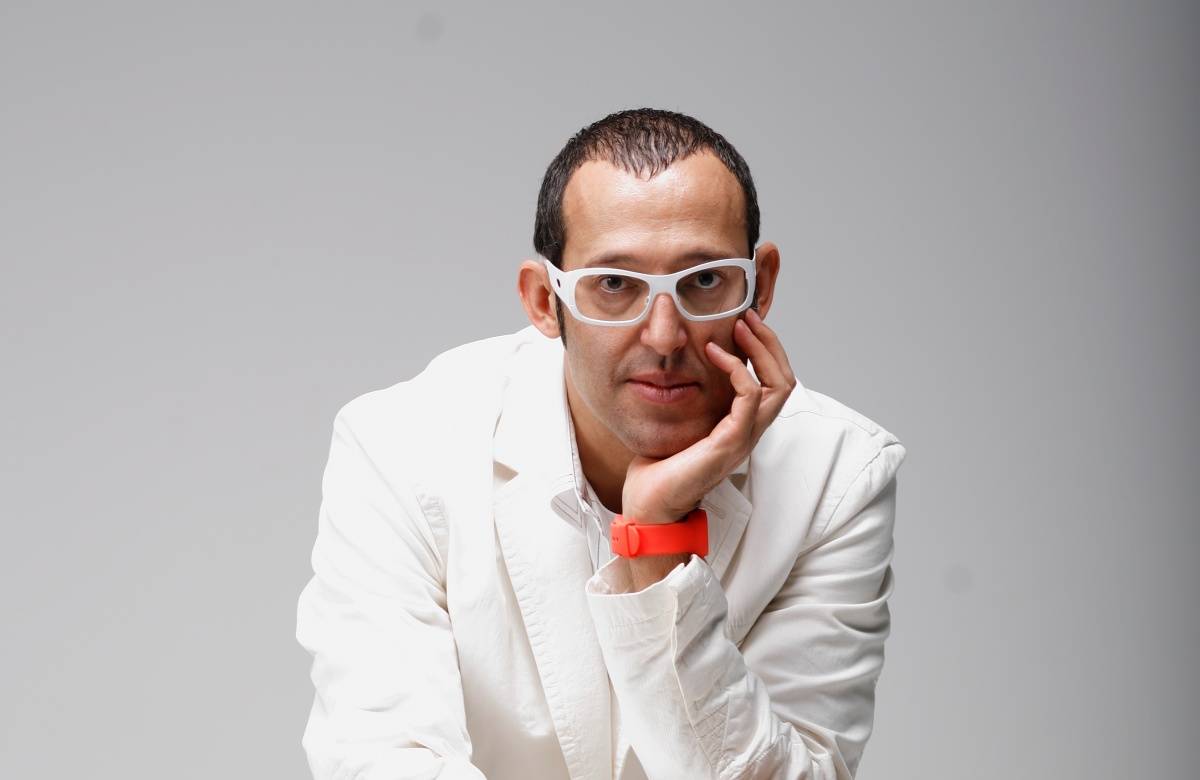