You could be forgiven for thinking that you’ve arrived at a high-end car dealership or an exhibition center. But no, the imposing steel glass fronted property in question is singer/songwriter/producer Pharrell Williams’ new L.A. mansion, purchased from filmmaker Tyler Perry.

Records show that Tyler only purchased the investment property earlier this year for $15 million before deciding to flip it for $17 million. However, the potential profit was eaten away when he sold it to Williams for $15.6 million, bearing in mind legal fees and transfer taxes associated with the deal. Williams, whose hits include “Happy” (from the movie Despicable Me 2) and “Blurred Lines” which he wrote for Robin Thicke, amongst many others, paid $7.14 million in 2015 for a six-bedroom, five-full-bathroom LA home above Laurel Canyon. Like his new investment, it also features a wall of windows. 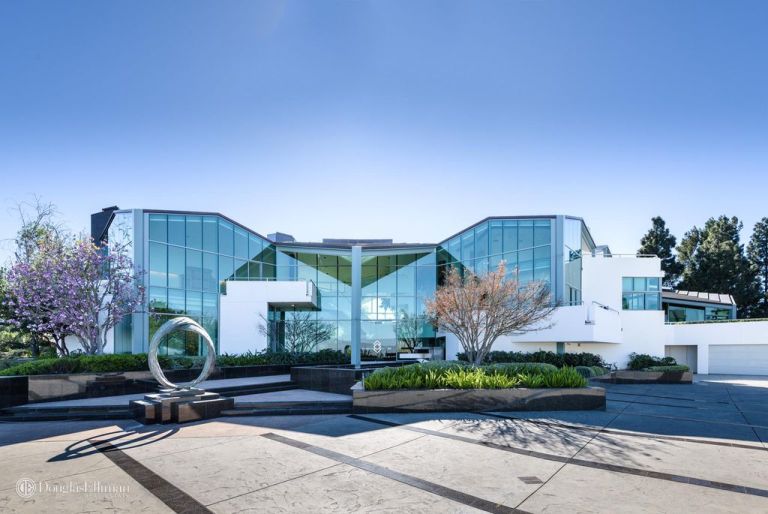 The house contains 10 bedrooms and 11 bathrooms over two floors. In total, the interior of the property is an echo inducing 17,245 square feet with a total lot size of 4.25 acres. Clearly it’s not the kind of place to hide and be incognito. The amount of glass, steel, stone, concrete and hard angles give his newer purchase a rather cold aesthetic and it’s hard to imagine someone calling the place home on an ongoing basis, let alone raising a family there (Williams and his wife, Helen Lasichanh have four children, including triplets). Even the five fireplaces won’t warm it up. Adding to the frosty feeling are the sets of striking marble stairs connecting the three floors and the oversized crystal light hanging over the dining table. 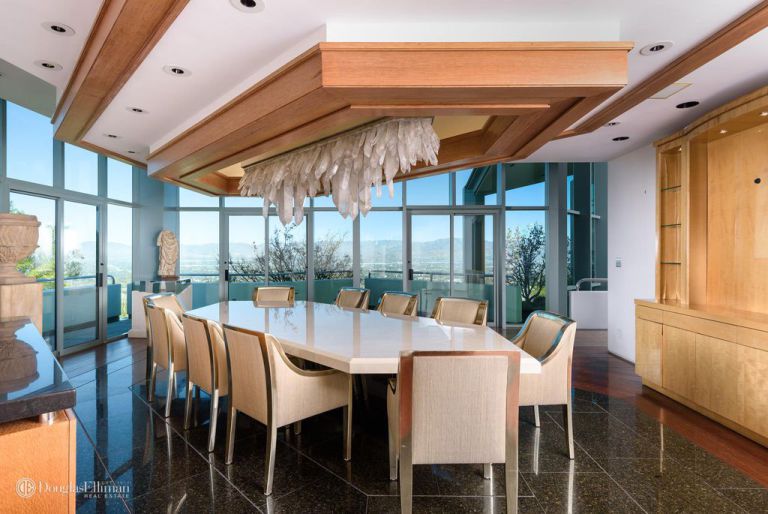 Like Perry before him, chances are Williams will use the property as an investment, a place to park his money. It’s the ultimate party pad and don’t be surprised if it shows up in a future video or two from Pharrell or his pals. Other amenities include a stone-lined pool a grotto, a la Playboy mansion, slide, a below-grade tennis court with night lights and a carport that can hold no less than 30 vehicles (woot! woot!).

Pharrell has been writing hit songs for the like of Beyoncé, Britney Spears and Jay-Z for years. In addition he has fashion brands and regularly collaborates with companies such as Adidas, Louis Vuitton, G-Star Raw and Uniqlo. The artist who originally hails from Virginia Beach, was a judge on NBC’s The Voice for four seasons, appearing alongside Blake Shelton, Adam Levine and Christina Aguilera, before leaving in 2017. According to Celebrity Net Worth, Pharrell Williams’s ledger bulges to the tune of around $150 million (£107 million).

Much of that wealth has been spent on real estate. In 2012 he unsuccessfully attempted to sell his Miami, Florida estate in the coveted Coral Way neighborhood for $16.8 million. He tried again to offload it in 2013 for $14 million before dropping it to $10 million, according to trulia.com. The property was then pulled off the market for renovations before the musician found a buyer at $9.25 million — a loss of $3.27 million.

Williams net worth is dwarfed, however by Tyler Perry’s, which is estimated to be somewhere in the region of $600 million. Reason enough for the filmmaker and actor to build a massive 34,000-square-foot mansion on 1,200 acres, near his film studio in Georgia. Perry plans to use part of his extensive acreage for an organic farm.

Two years ago, Architectural Digest featured Perry’s former residence, a French Provincial-style manor, which sold for $17.5 million, breaking the city’s record for most expensive residential sale. The Atlanta Business Chronicle noted that Perry’s home, built in 2008, was set on 17 park-like acres along the Chattahoochee River. Must be nice.