Century Oaks, the most famous and priciest waterfront estate in the Tampa Bay-St. Petersburg-Clearwater metropolitan area, will be auctioned on October 11th, offering the highest bidder a chance to own history for a minimum reserve price of $8.5 million. 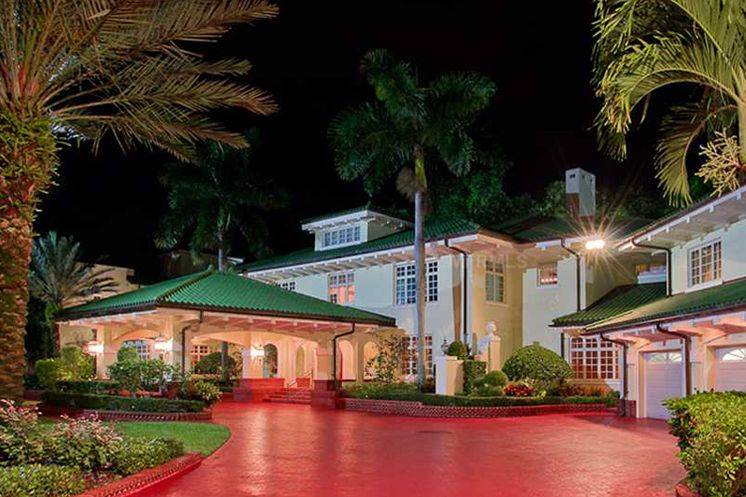 Century Oaks' main home is a Mediterranean-style white stucco mansion with a green tile roof and a red brick driveway. 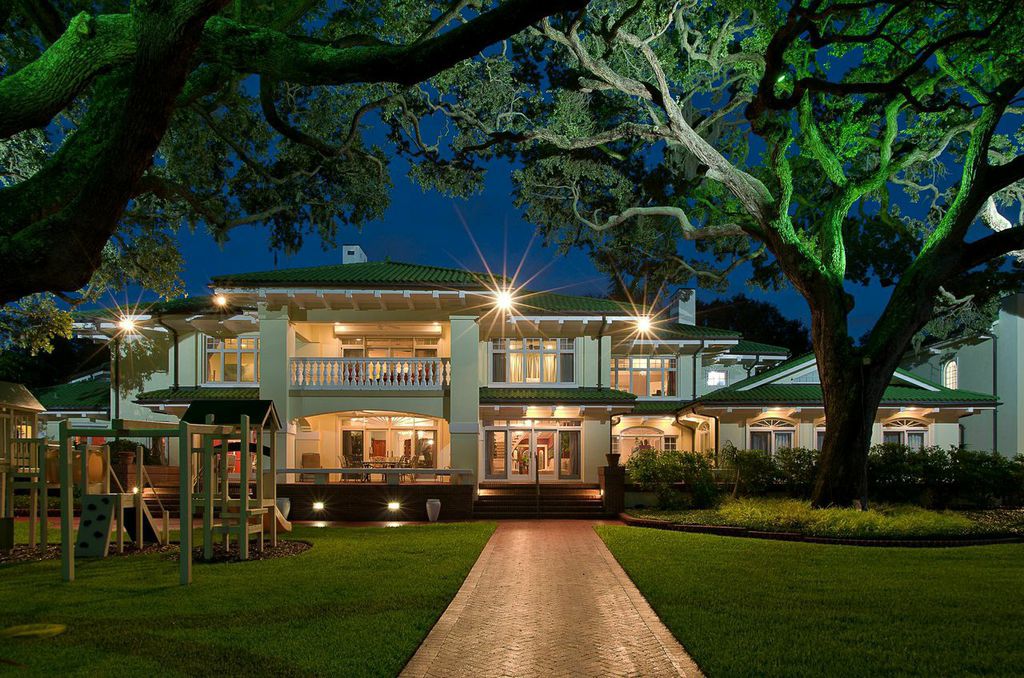 Both properties were developed in 1915 by New York real estate mogul Dean Alvord, who transformed the waterfront from an abandoned United States military outpost (called Fort Harrison) into a “luxury oasis for the rich and famous” according to Daniel DeCaro, the auction house’s founder and auctioneer, who will preside over the sale. The auctions will be held onsite at 802 Druid Road South, blocks from downtown Clearwater.

“The first property being auctioned, Century Oaks, was actually Alvord’s personal mansion, which he built with extra lavish finishes on the Bluffs of Clearwater,” says DeCaro. “The home is by far the most prominent estate in the Tampa Bay Area, which past owners can attest to, including Formula One legend Nigel Mansell.” 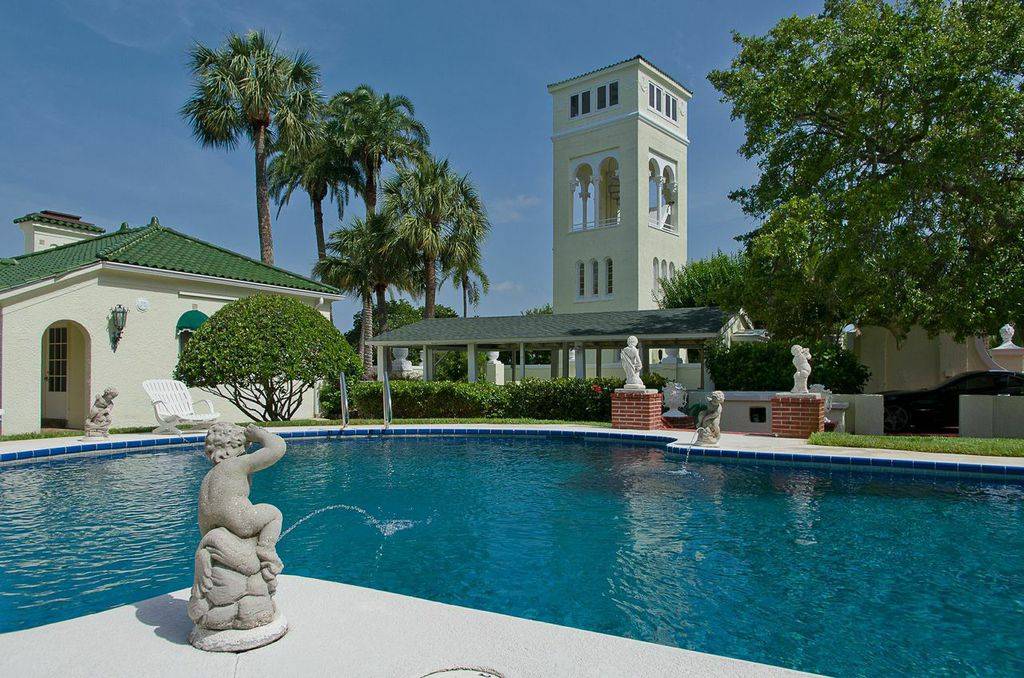 One of the in-ground pools flanked by a gazebo and an historic bell tower. 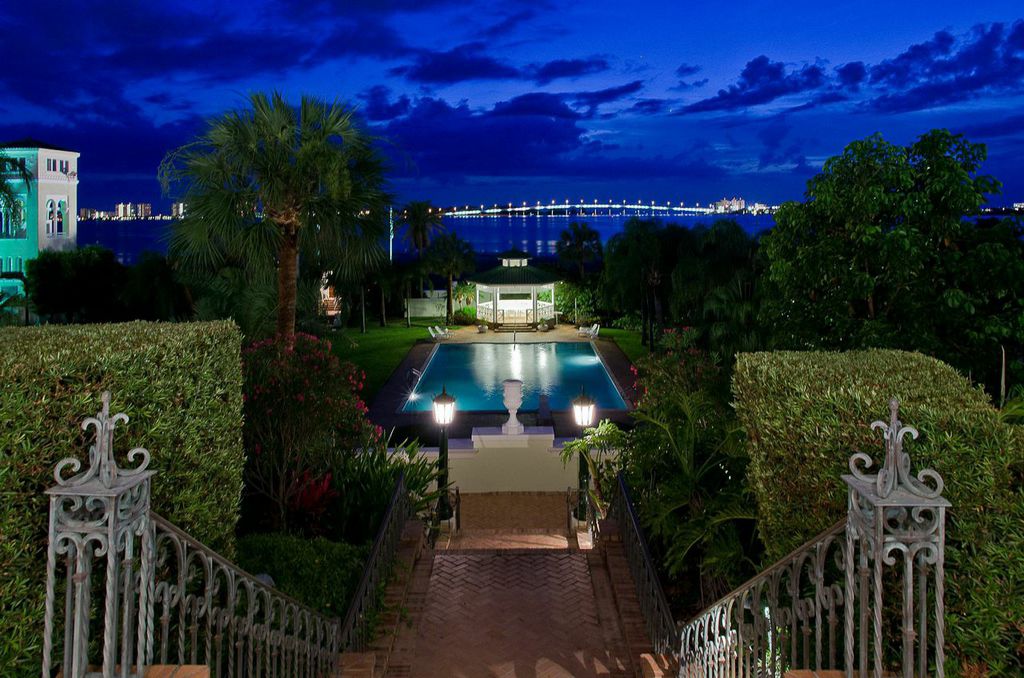 A night view of Century Oak's cascading gardens, gazebo and the Clearwater Bay.

According to the Tampa Bay Times, Century Oaks was part of Clearwater's first planned residential subdivision, built with then-innovative amenities such as paved streets and underground utilities to attract wealthy "Northern industrialists and professionals looking to winter in the Florida sun." Lots sold for a reported $1,750 then.

Since, Century Oaks is responsible for giving rise to one of Clearwater's wealthiest neighborhoods. Mansell sold the estate in 1996 for a reported $5.5 million to businessman and champion powerboat racer Hugh Fuller, who subsequently listed the property for $17.5 million in 2013. 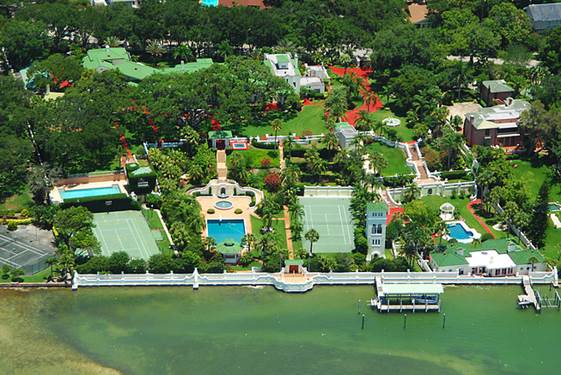 The sprawling estate has in-ground swimming pools, tennis courts, basketball courts, a private dock, a gazebo and a bell tower, all of which overlook Clearwater Bay.

The winning bidder may need a honeymoon period to get acquainted with the property. Century Oaks is a 3.45 acre-compound with a main house and a north house surrounded by meticulously lush landscaping, palm trees, 500-year-old oak trees, fountains and cascading gardens. The estate boasts two in-ground swimming pools; regulation-size tennis courts and basketball courts; a private dock with several boat slips, a boat and Jet Ski lifts; and a historic bell tower and gazebo which overlook Clearwater Bay.

According to DeCaro Luxury Real Estate Auctions, the estate is still beautified with original features and custom finishes, including oversized wood moldings, Brazilian cherry wood floors and an elegant foyer with marble floors and a winding staircase. 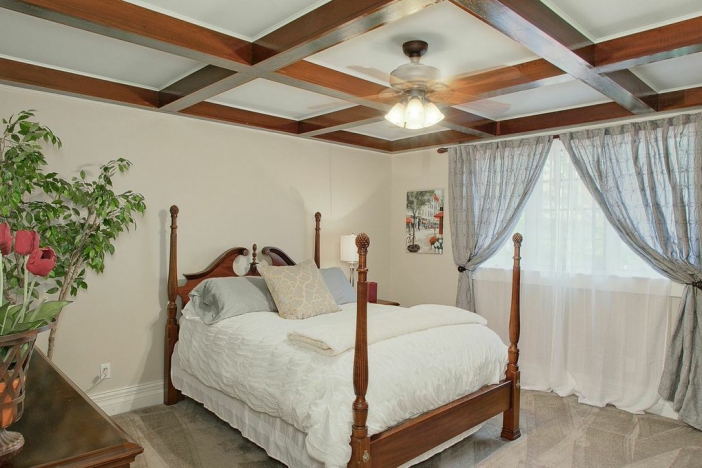 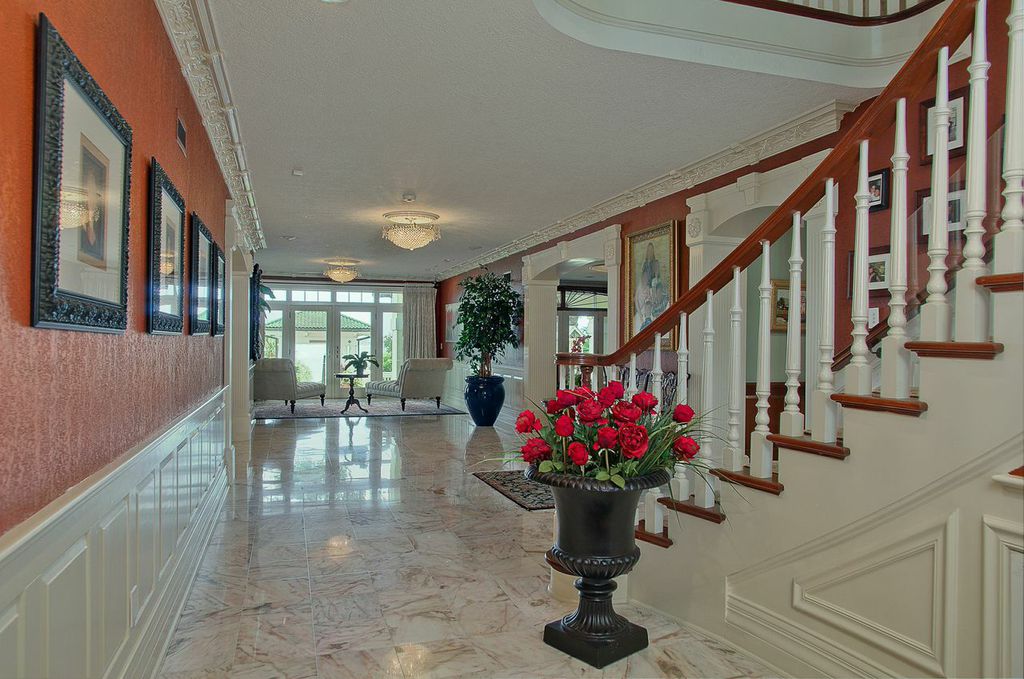 The estate is still beautified with original features like marble floors in its elegant foyer.

The massive 23,919-square-foot main home is a Mediterranean-style white stucco mansion with a green tile roof and red brick driveway. Located at 802 Druid Road South, this home boasts 10 bedrooms, 15 full-bathrooms, 9 half-bathrooms and two private guest wings. It also features: a formal living room with a gas fireplace; a formal dining room; a kitchen with butler and staff areas; a home theater; a library; a music studio; a sun room; a trophy room; and a ballroom with (of course) three crystal chandeliers, 25-foot wood-beamed ceilings and a terrace that opens to an outdoor entertainment space.

North Guest House (800 Druid Road South)
The 5,000-square-foot north house, located at 800 Druid Road South, serves as a guest home, with four bedrooms, five full bathrooms and two half bathrooms. The north guesthouse also showcases a suite of offices, a full gym, a billiards room with a bar, and music and sun rooms.

A Century Oaks carriage house was converted into a five-car, air conditioned garage equipped with a hydraulic car lift to accommodate extra parking during events or guest stays.

The 3,046-square-foot home that neighbors Century Oaks, 820 Druid Road South, boasts three bedrooms, three full bathrooms, a fireplace, central air conditioning, an in-ground pool, and a private dock with a boat-lift. It sits high on a waterfront bluff and includes more than 1 acre of buildable land with direct views of Clearwater Bay. 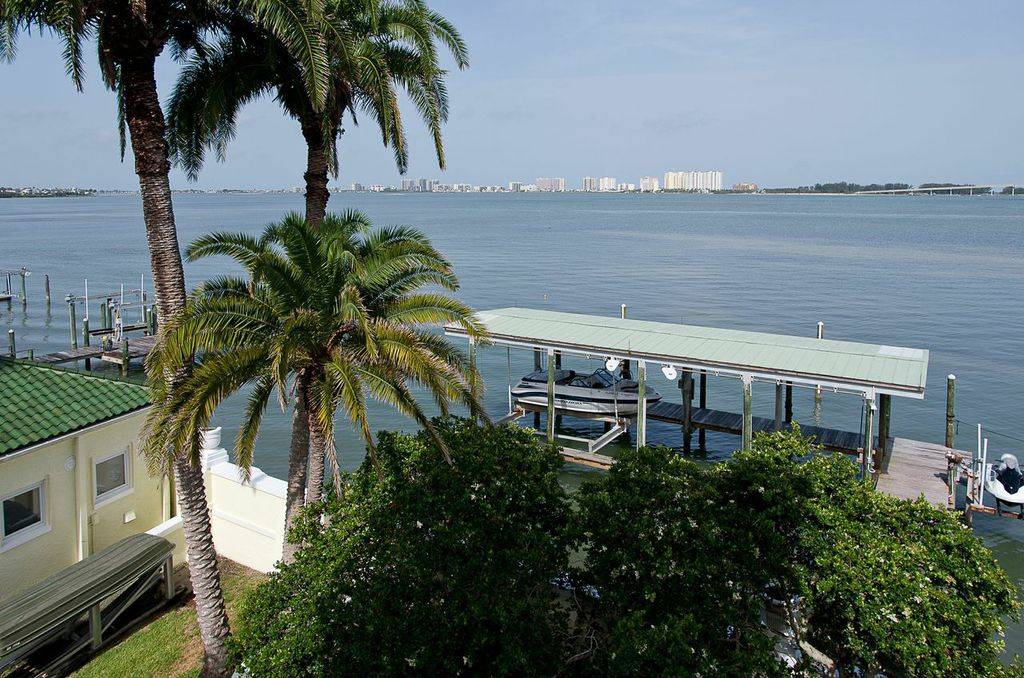 A private dock with boat and Jet Ski lifts.

The last scheduled open house viewing for prospective buyers is the day before the auction—Friday, October 10, 2014 from 1 to 4 pm. Both homes can also be seen via private appointment by contacting DeCaro Luxury Real Estate Auctions at (800) 332-3767 or visiting its official website.