What Makes A Celebrity It Building?

In the history of New York City, there has always been the building to live in. Uptown, downtown, East Side, West Side, Brooklyn, and beyond, at any point in the city’s history, New York’s biggest names have always wanted to be a part of the It everything. Apartment locales are no exception.

Today, 443 Greenwich Street is the place to be. Packed with celebrities like Meg Ryan, Justin Timberlake, and its most recent resident Harry Styles, the building has become a magnet of New York’s coolest inhabitants. What makes the building such a draw though for people? Like its predecessors, 15 Central Park West, 150 Charles Street, The Police Building, 155 Franklin, and so many others, the building is a combination of great minds putting together an even greater building, a little bit of being at the right place in the right time, knowing the neighborhood, and appealing to the right kind of client.

"At 443 Greenwich, we designed a project based upon the provenance of this landmark building and delved into the specifics of the building that would create unique homes--not just places to live but an unparalleled lifestyle,” says Nancy Ruddy, Founding Principal of architecture and design firm CetraRuddy. “As we reflected on what luxury really is, we determined that privacy and respite from our busy lives was a luxury that all people want. We created a private garage within the building where people can drive into the building and get directly into their apartments. This ability to live a very private life, uninterrupted by the noise of the city, became a major asset to purchasers.” A concept would become an obvious draw to the celebrity influence of the building, let alone the proximity to some of the city’s best new restaurants, entertainment, and more. 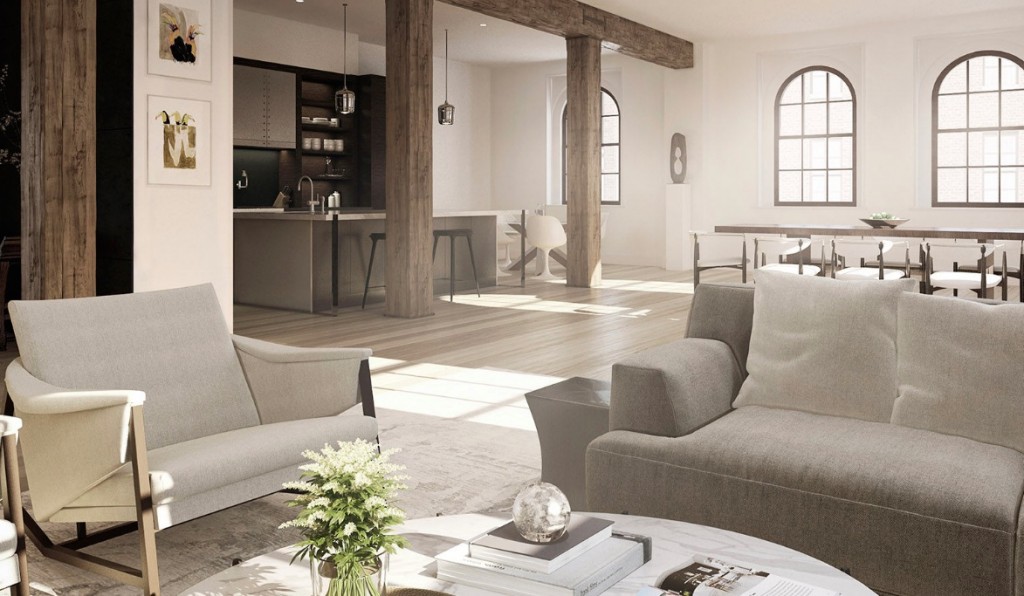 The building is a former bookbindery in an area of TriBeCa historically used for manufacturing. The building utilizes the space in a way that offers larger units for its residents, and in doing so provides a sense of exclusivity that anyone on the outside would be green with envy over. There are only 53 apartments in the entire building. It also is a design modern enough to appeal to today’s styles, but without going too over the top that the look and feel of the building will stand for a long time. Looking back at It Buildings throughout the years in New York, many are towers on Central Park, or East Side landmarks that had been refurbished, and just like 443 Greenwich were in a neighborhood that at the time was a quiet place in close proximity to all the coolest elements of New York.

“The developer knew he wanted to make large apartments that would appeal to these buyers, people who entertain and enjoy the luxury of New York,” says Richard Cantor, head of marketing and sales for the building. “He created a private entrance to the second garage, it allowed people to come into the building without being bothered or noticed, by paparazzi or anyone who might intrude on their privacy. I think that appeals to people that are in aesthetic businesses like movies or the arts.”

Like every It Building though, celebrity tenants and a buzz were hoped for, but not expected. According to Cantor, “We didn’t plan this space for celebrities, that wasn’t even in our thinking. We just wanted to provide this for the people that would appreciate it. I think people like that they can get the same amount of living space they do in some of their other homes while still having access to the city.”

There is a certain method to the system though, qualities that each of the buildings have known and followed as they developed this following. Richard Cantor has seen 443 Greenwich follow a similar structure to success as the previous It Building, 15 CPW. “15 Central Park West was the first truly luxurious building built in 15 years, and its right on the park, which is perfect for New Yorkers. Our building was the largest building in the area, and located right near the river. We decided to go out of our way to put layouts and amenities that would appeal to people who wanted the best in life, and who wanted a New Yorker lifestyle to the fullest, and that’s what all of them do. They were all made to a level and finish that other buildings didn’t have. Once a building catches on and people know about it there’s a certain snowball effect that builds, an underground gossip about the building that builds, which I think has happened to us.” Whatever the secret of success to these buildings may be, 443 Greenwich has tapped into it and is breaking new ground for the rise for celebrity real estate in the city.