The sitcom star added the $2,050,000 apartment to her already-impressive real estate portfolio. Separated from her husband David Arquette, Cox’s new condo features two bedrooms and three bathrooms in 1,672 square feet of interior space in addition to a long balcony with views to the north and east.

According to reports, Cox acquired the apartment from a not-famous short-term owner who purchased the unit less than six months earlier for $1,450,000. While that individual may not have been famous, Sierra Towers is known for its celebrity residents. High profile stars like Cher, Elton John, Joan Collins, Diahann Carroll and diet guru Nikki Haskell are among them.  Sharon and Ozzy Osbourne currently lease a unit in the building, which they had worked over by Million Dollar Decorator Martyn Lawrence Bullard. Past renters in Sierra Towers include Lindsay Lohan and stylist to the stars Rachel Zoe.

Cox also owns a $17,150,000 private compound that she had worked over by architect Michael Kovac and decorator Trip Haenisch. Together with Arquette, Cox also owns two Beverly Hills residences located just half a mile from the Sierra Towers building. 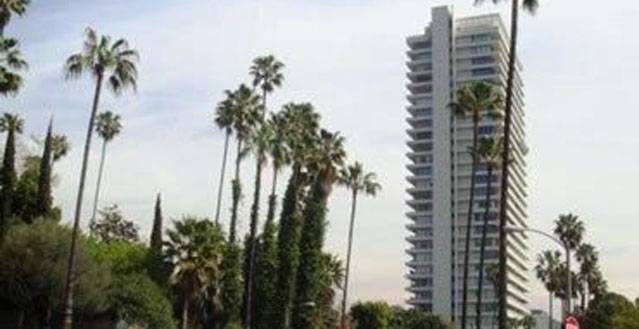