Celebrities, Moguls, and their Private Islands

The ultra-rich already hold a privileged role in the world, but nothing quite speaks of exclusivity like owning your own private island, cloistered away from the rest of the world on a personal piece of Paradise. According to Born Rich, these owners have acquired such pieces of prime island real estate and, what’s more, have had them tailored to their own leisurely needs. 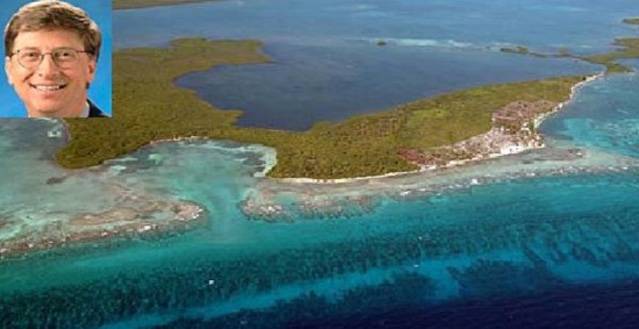 Grand Bogue Caye, Belize
Owner: Bill Gates
Net Worth: $56 Billion
Bill Gates is by now no stranger to extravagance, as seen by his purchase of this island – supposedly the largest in the republic of Belize. Ever the savvy entrepreneur, Gates may have purchased this particular plot for its reputation as being one to provide unparalleled opportunities for growth and investor return. That, and it is just an astounding piece of Paradise with amazing water sports, specialized saltwater fishing areas, gorgeous views of the water, abundant shady palm and coconut trees, and a lush forest toward one end of the island. 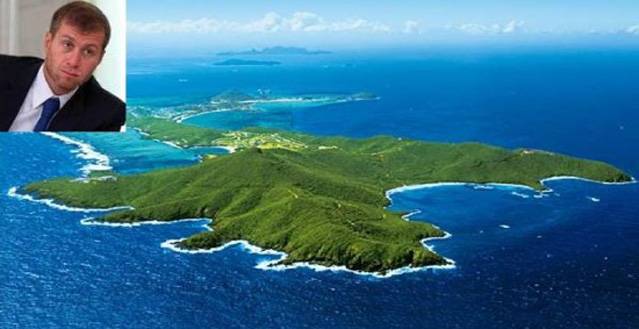 This Russian billionaire is known for his investments in a number of ventures through his investment firm Milhouse LLC, and for his willingness to pay record auction prices for art. Jeet Singh, co-founder of ATG, formerly owned this private island before Abramovich purchased it for an astounding $90 million, making it another record for the oligarch as one of the most expensive islands ever sold. The exotic 70-acre locale boasts extraordinary ocean views, tennis courts, and swimming pools. 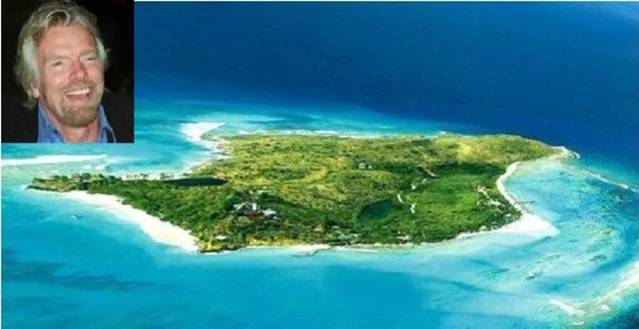 Necker Island, British Virgin Islands
Owner: Sir Richard Branson
Net Worth: $4.2 Billion
You’re probably already familiar with the high-flying Brit and head of the Virgin Group – made up of over a few hundred companies – but it’s now time to get to know his prime piece of British Virgin Islands real estate. Surrounded by pristine waters, coral reefs, and boasting a flawless sandy beach, the island is easily reached by helicopter from a neighboring island and, for you and 24 guests, comes with a staff of 60 people for $53,000 a night. 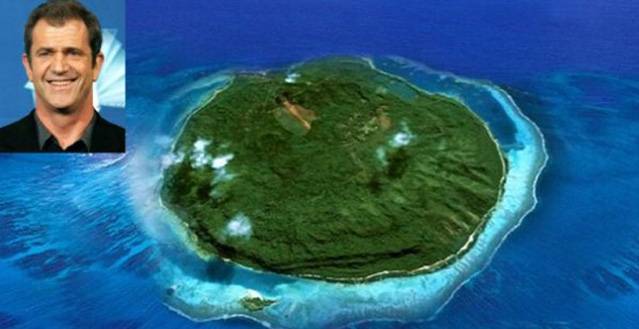 Mago Island, Fiji
Owner: Mel Gibson
Net Worth: $600 Million
Film mogul Mel Gibson purchased his 5,400-acre private island from a Japanese company in 2005 for $15 million. Although there are not many details about the locale made public, it has been said that Gibson enjoys the island in its natural state, and doesn’t plan on changing it very much. The island, which is known to be one of the largest private islands in the Pacific, is super private in that it only houses a couple of people – some Fijian caretakers and whoever happens to be at Gibson’s private residence. 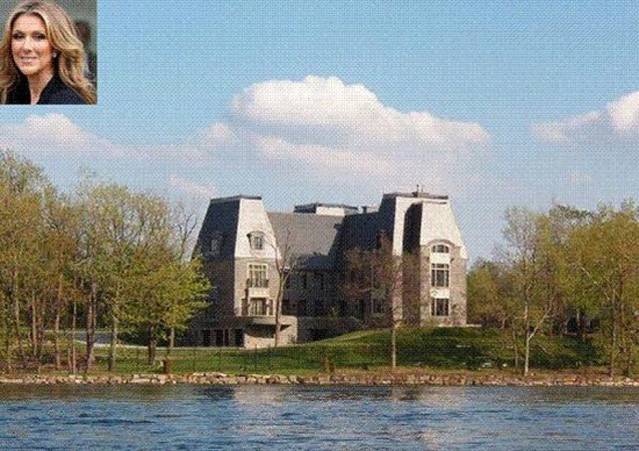 Île Gagnon, Quebec
Owner: Celine Dion
Net Worth: $400 Million
For decades now, the famous Canadian has been a music industry queen with scores of top-charting hits and celebrated live shows, making her one of the world’s highest paid performers. The songstress purchased an island in Quebec on the Iles River to house her sprawling mansion, which was subject to a number of strict security measures. The island is so privatized that the closest an outsider can get is a glimpse in passing by boat. 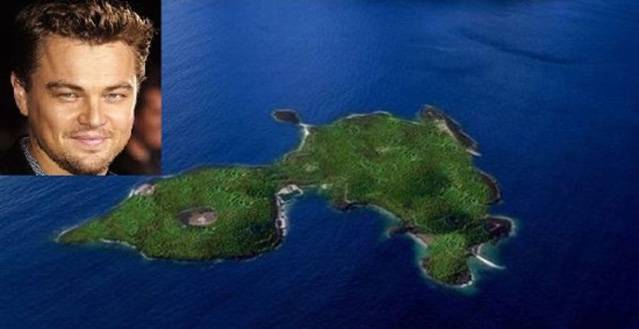 Blackadore Cay, Belize
Owner: Leonardo DiCaprio
Net Worth: $200+ Million
Leonardo DiCaprio is perhaps now as well known for his acting in blockbuster films as he is for producing them. His island is situated in the barrier reef between Belize and Ambergris Caye and boasts an idyllic 104 acres. Reportedly purchased by the star for $1.75 million, the island is undergoing a green makeover with plans to incorporate solar power energy and a possible eco-resort at the gorgeous getaway. 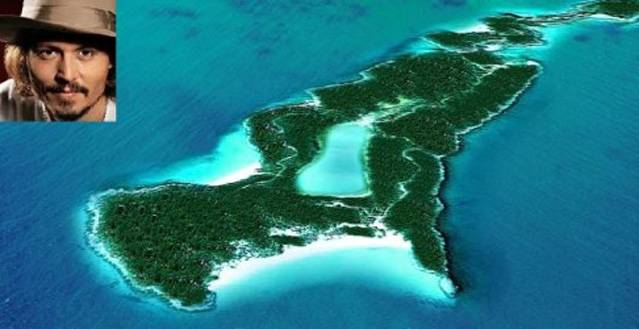 This Pirates of the Caribbean series has earned the acclaimed actor millions – and his own private piece of the Bahamas islands. During shooting of the popular Pirates movies, the actor was enamored by the lifestyle of the people living in the Bahamas and thus decided to stake his own claim there for his immediate family – wife Vanessa Paradis and two children. Eco-friendly and breathtakingly scenic, the private island will harness the use of solar power to reduce its carbon footprint and maintain its green atmosphere. 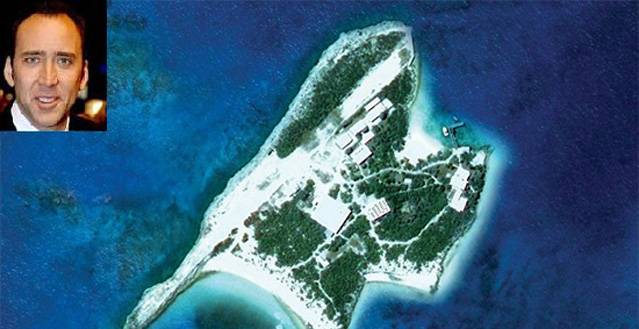 This actor/director/producer has been associated now with more than 60 movies to date and has made himself a pretty penny doing so. His island is located in the Exuma range of the Bahamas, and it neighbors the island of Cage’s good friend and fellow film legend Johnny Depp. The island boasts 19 buildings to include hotels, a 1500-foot airstrip, protected marina, solar power backup energy supply, lush private beaches, and more – and the island is not even entirely done with development yet. 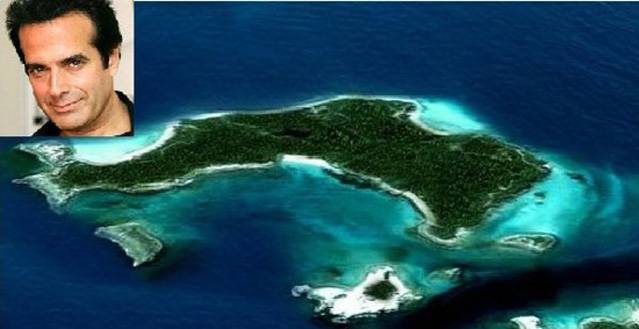 Known as one of the greatest magicians and illusionists, Copperfield has often times vanished to his island, located 85 miles from Nassau in the Bahamas. It is located in a zone that is known as the largest collection of private islands and vacation destinations for the world’s VIPs. Musha Cay in itself is a collection of four lush islands with a total size of 700 acres and, for $32,250 per night, one can enjoy all that the luxurious locale has to offer – accommodations in a choice of five themed luxury villas (complete with Copperfield’s famed private art collection), water sports with provided state-of-the-art equipment, basking in the sun on the private beaches, and a feast of exquisite Caribbean cuisine.

Bonds Cay, Bahamas
Owner: Shakira
Net Worth: $140 Million
Co-Owners: Roger Waters and Alejandro Sanz
This Colombia-cum-international music sensation purchased this scenic spot with Pink Floyd frontman Roger Waters and fellow Latin music star Alejandro Sanz. The 700-acre island, located in a gorgeous vacation area of the Bahamas, has become one of the most popular party spots of the rich and famous, and the owners only intend on developing it further. The island is currently home to boutique hotels, private beaches, luxury condominiums, private galleries, an 18-hole golf course, and more. 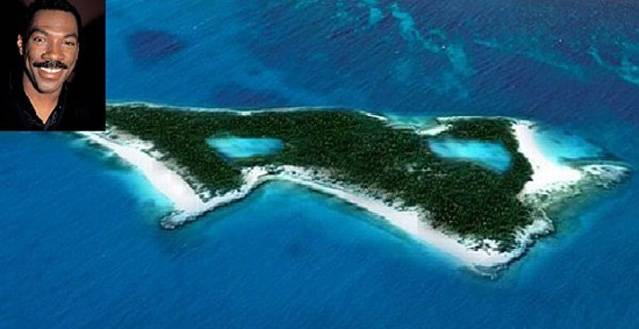 Rooster Cay Island, Bahamas
Owner: Eddie Murphy
Net Worth: $75 Million
This entertainment Renaissance man is one of the highest paid in the biz and purchased his private island in 2007 for $15 million. Unlike some of the islands owned by fellow film figures, Murphy’s island is in a prime location within close proximity to the Bahamas hub of Nassau. Not many details are known, but the locale is said to be ideal for resort decelopment and recreation, much like its neighbor, Paradise Island, which is known as a premier tourist vacation destination.