HLRN is pleased to announce a new collaboration with TopTenRealEstateDeals.com, who will contribute five of their very best listings for your viewing pleasure.

Zane Grey fell in love with the island and built a Hopi-style pueblo home on a half-acre hilltop of the island in 1926.  This location and home combined his favorite things: the pueblo-styled house paid homage to his love of the Pioneer West and the Pacific waters below allowed for his favorite sport of fishing.  Zane was quite a ladies man with many mistresses and often used this home as a love nest while his wife and children stayed in California.

The current owners have operated the home as a sixteen-room bed and breakfast under the name of the Zane Grey Pueblo Hotel for more than fifty years, though Zane used the entire building as his home until he died in 1939.  The added three bedroom, two bath penthouse has served as the owners’ residence and has panoramic views of the harbor from its terrace.  The additional house, now used as the caretaker’s cottage, was the vacation house Grey built for his brother.  Originally listed at $16.95 million, after being reduced over $10 million, the current list price is $6.5 million. 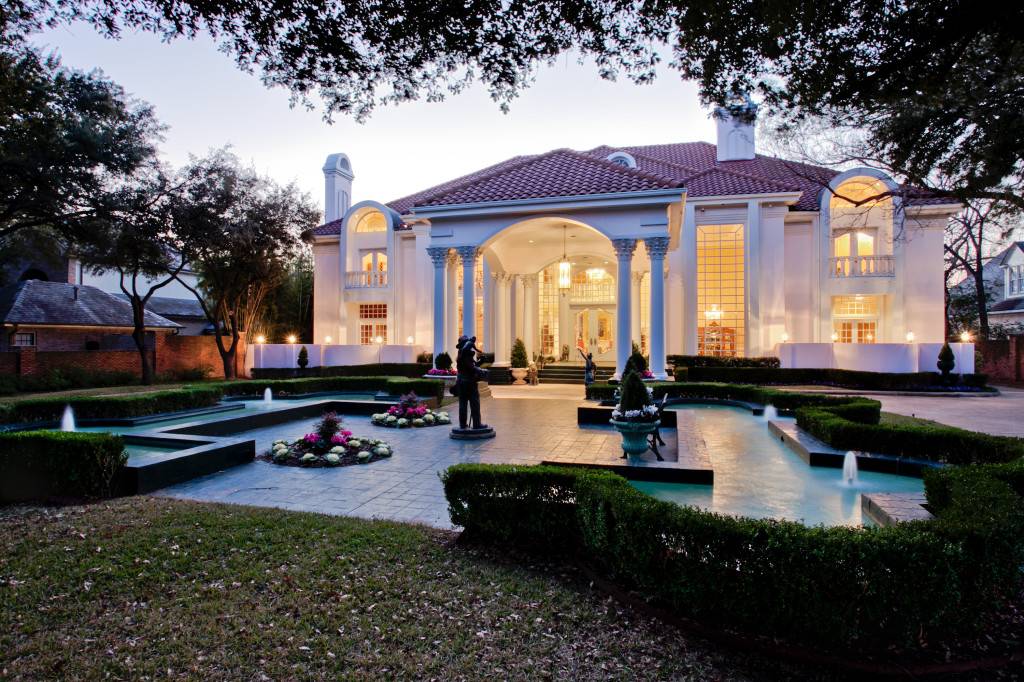 Now for sale, Mary Kay’s iconic signature pink Texas mansion, her opulent showplace to highlight her success and to entertain in grand style.  Fortunately for most potential buyers, the current owners neutralized the pink into sophisticated beige shades. The 12,115 square foot mansion consists of six bedrooms and seven baths on 1.05 acres in the coveted Old Preston Hollow neighborhood.  Special features include several large marble staircases, paneled den, large kitchen and wine cellar.  All rooms are large-scaled and many have 40’ ceilings.  The floor-to-ceiling arched windows have beveled glass panes and fill the home with natural light.  Outside is a Romanesque pool with columns and statues said to have been inspired by the pool at Hearst’s San Simeon Castle.  Landscaped grounds contain trees, pools, fountains and a koi pond.  Mary Kay’s former house was originally priced at $5.7 million, now asking $2.8 million. It is one of the prettiest mansions in Dallas. 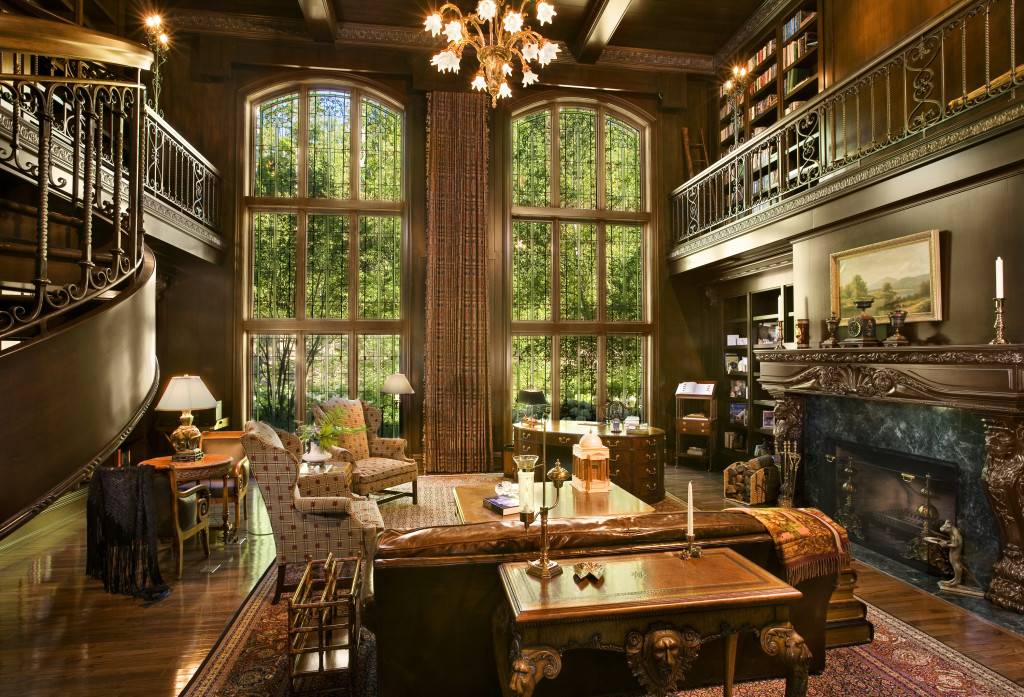 Containing 35,000 square feet of living space, included in the sale are the furnishings, a beach house, three bedroom guest-staff house and 80 additional acres.  The mansion has four bedrooms, including the 5,000 square foot master suite, ten bathrooms and a two-story paneled library with a large fireplace said to be a replica from the Vanderbilt Mansion in North Carolina.  There is a movie theater with ticket booth and concession stand, multiple sitting rooms, two-story grand parlor, and an attached flower arranging-potting room that also acts as a greenhouse.  The indoor pool and spa were built with quarry stone from Jerusalem.  The home’s wallpaper and carpet were imported from England. 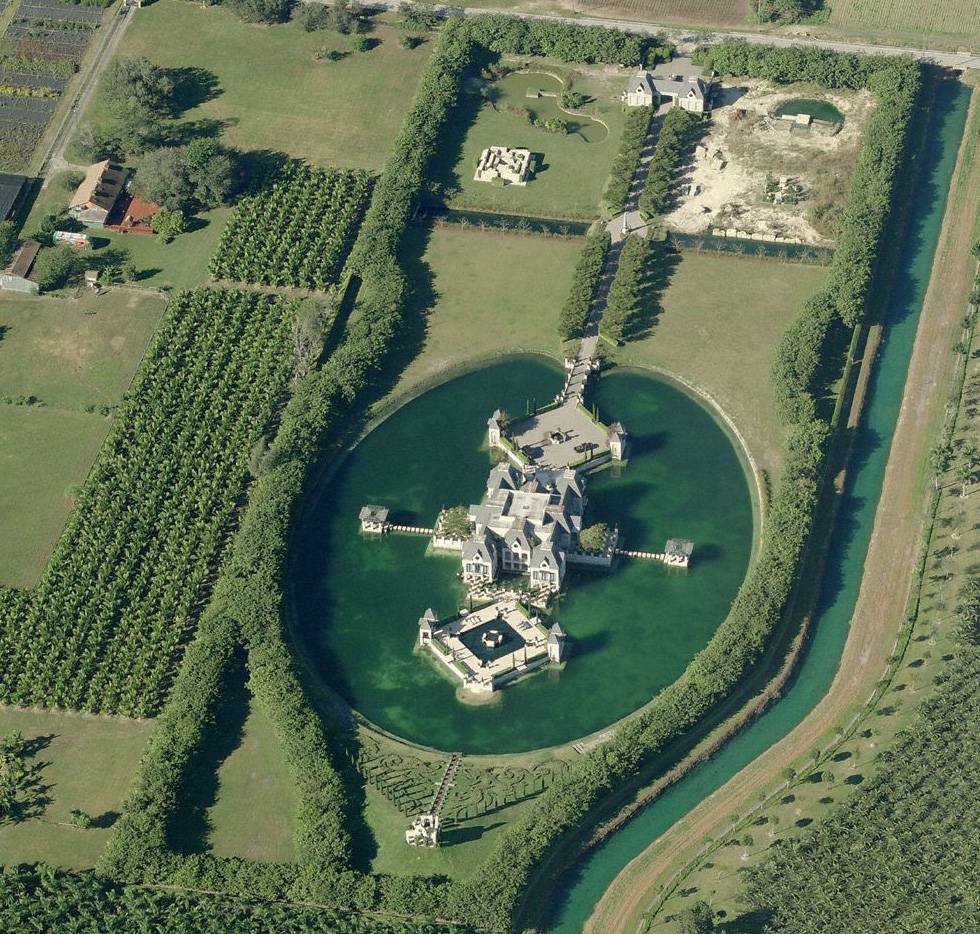 The chateau-castle was built in 2007 and has 19,222 square feet of living space
containing eight bedrooms, ten baths and is three-stories with an elevator. Both formal living and dining rooms have impressive two-story ceilings with the living room surrounded by the second-story balcony.  There is also a media room, recreation room, a master bath with bidet, eat-in kitchen with breakfast room and a loft with many outdoor spaces for entertaining or enjoying a leisurely Sunday morning over the Miami Herald and coffee.  A separate guest house is on the grounds of formal gardens reminiscent of medieval Roman ruins as well as a large koi pond.  Accentuating the diamond shape of the moated enclosure are two gazebos jutting out into the water at either side inviting quiet reflection with panoramic views of this unique property. 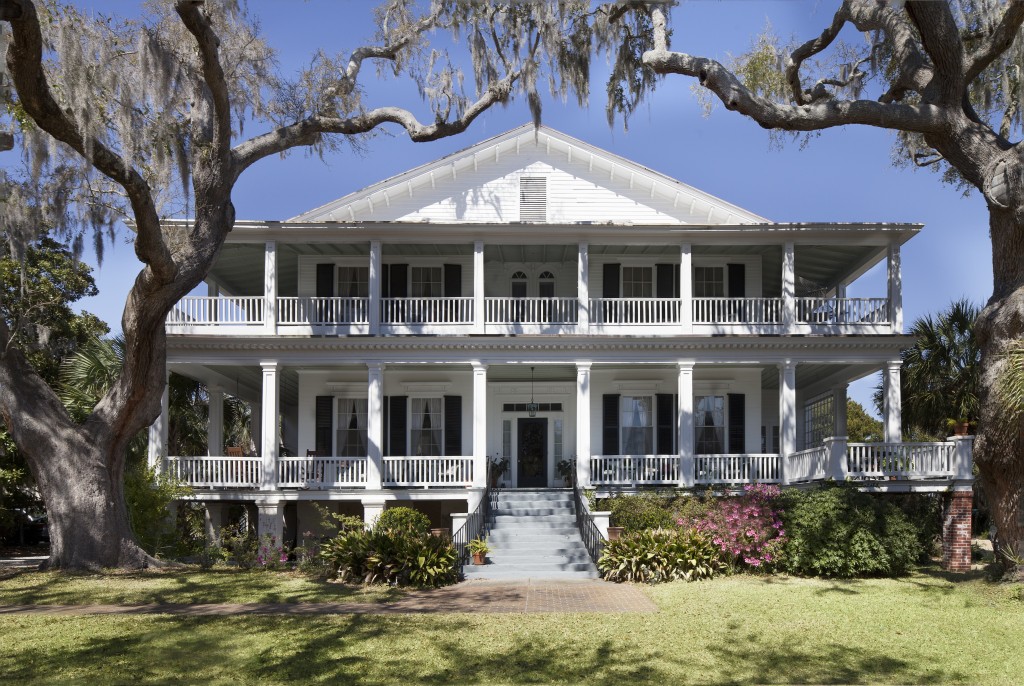 The 7,381 square foot home consists of a wide central foyer flanked by large living and dining rooms with unusual detailed moldings.  It also has a large eat-in kitchen, paneled library, seven bedrooms and eight baths.  There is a two-bedroom guest cottage and a private dock providing access to the Intracoastal Waterway and river.  Located in the midst of the National Historic Landmark District, fine restaurants, shops, waterfront park and a marina are only a short walk away.