London’s super wealthy who found a way to bypass developing laws by building downward rather than expanding outward are now facing harsh opposition in many of the city’s most prestigious neighborhoods. “Iceberg Home” is a term coined for the style of architecture that emerged from, by some resident’s standards, restrictive Victorian mansions in neighborhoods that are protected under historical preservation orders.

Iceberg homes are known as lavish subterranean lairs, complete with everything from swimming pools to gyms and movie theaters. These extravagant underground extensions even go down three to four stories beneath the home, making for huge, windowless caverns of nothing but luxury. Some iceberg homes even use parts of the depth as quarters for their staff. The homes allow for the historic streets to maintain their integrity, while these mysterious and oftentimes eccentric spaces exist below. 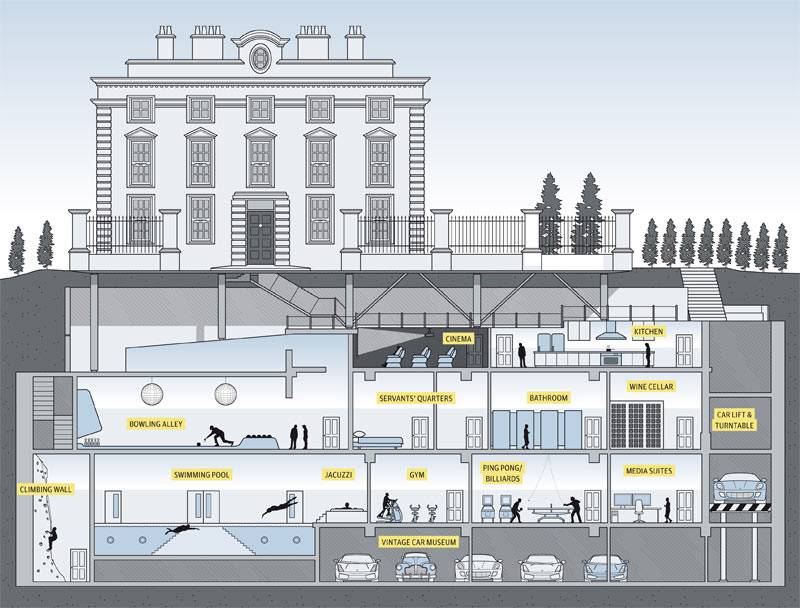 While it may seem like the perfect compromise between the residents of neighborhoods such as Belgravia and Knightsbridge seeking to expand their homes and those seeking not to tamper with history, the mere construction of these glamorous basements has taken an extreme toll on surrounding neighbors. The years it takes to excavate the ground are filled with noise, and the removal of such a massive amount of earth increases flood risks. For these reasons, among others, the city has created new guidelines to restrict and ultimately put an end to the building of these bizarre and fascinating home extensions.

For more on the latest and greatest in design news, visit Haute Design Network on Facebook!