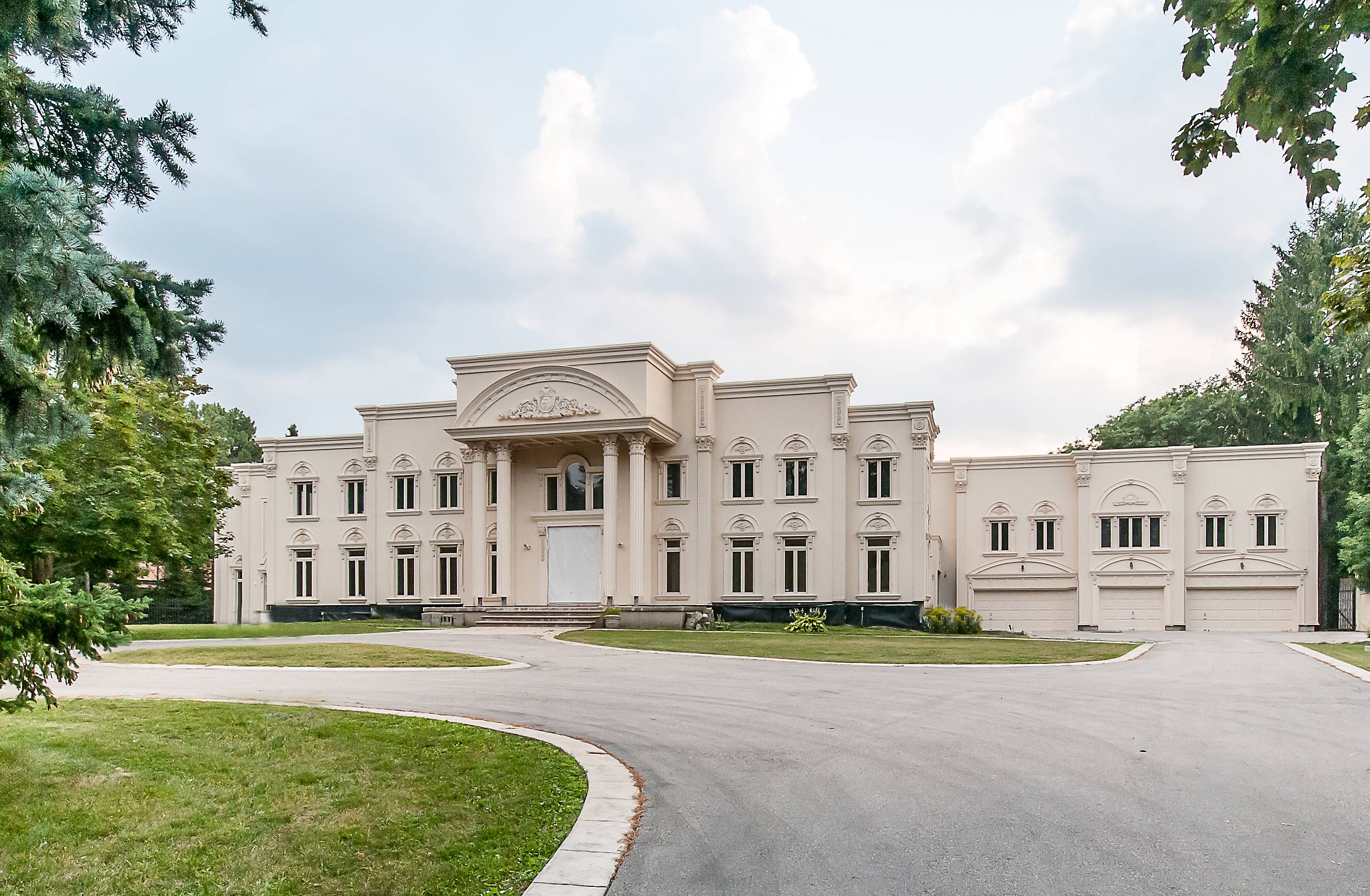 Check out this spectacular residence. It’s close to completion and will soon be auctioned, is an estate inspired by the Palace of Versailles and offers a rare opportunity to finish as one’s own.  Well positioned, the mansion is sited on 2.4 acres overlooking a large, wooded conservation area ensuring the utmost privacy.  Within and without its 27,000 square feet are lavish custom-designed plaster cartouches, friezes, emblems, two-story fluted pilasters with projecting Corinthian capitals and ornate brackets and laurel leaf corbels.  With eight bedrooms and fourteen bathrooms, highlighted are the catering kitchen located behind the daily kitchen, indoor swimming pool, nanny apartment, office suite, theatre, game room, grand ballroom, outdoor pool and tennis court.

Modeled after the Palace of Versailles in Canada’s most exclusive neighborhood, the Bridle Path area of Toronto, this mansion formerly listed at $23 million will be auctioned November 26th. 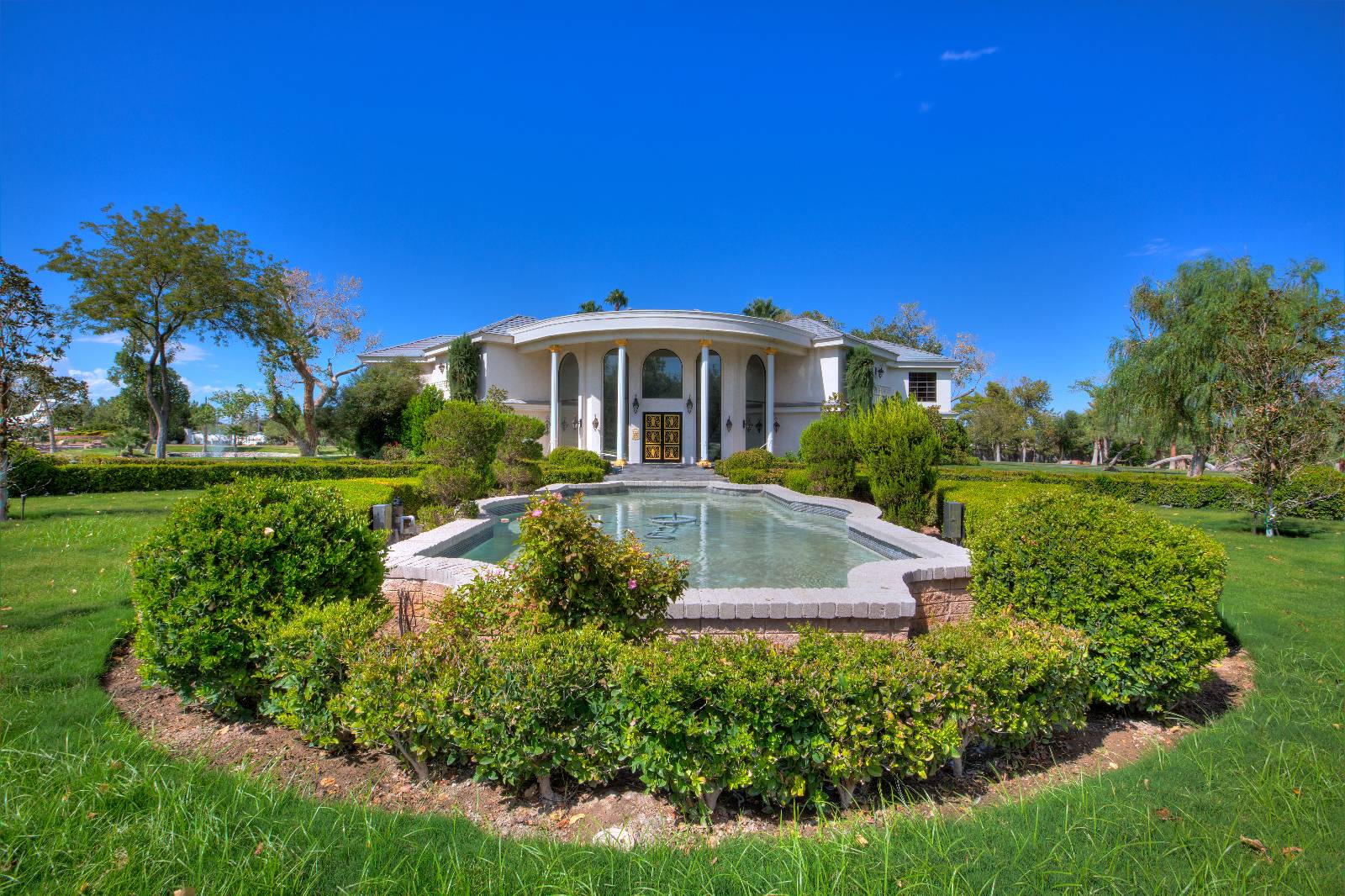 Wayne Newton’s estate mansion is only one of eight homes on this spectacular property, and it also has a 37-stall stable, a 16-stall stable with office, an equestrian pool for exercising the horses, acres of corrals, pastures, aviaries, car museum, game room, green room, zoo, tennis court and multiple swimming pools, ponds and fountains.  Even more interesting is the F28 private jet and terminal, which is included in the sale.  The main mansion at 11,192 square feet with three bedrooms and seven baths, has all the glamour and luxuries one would expect with marble floors, sunken living room, wrought iron railings and bannister and fireplaces.  Large palladian windows frame views across the grounds. 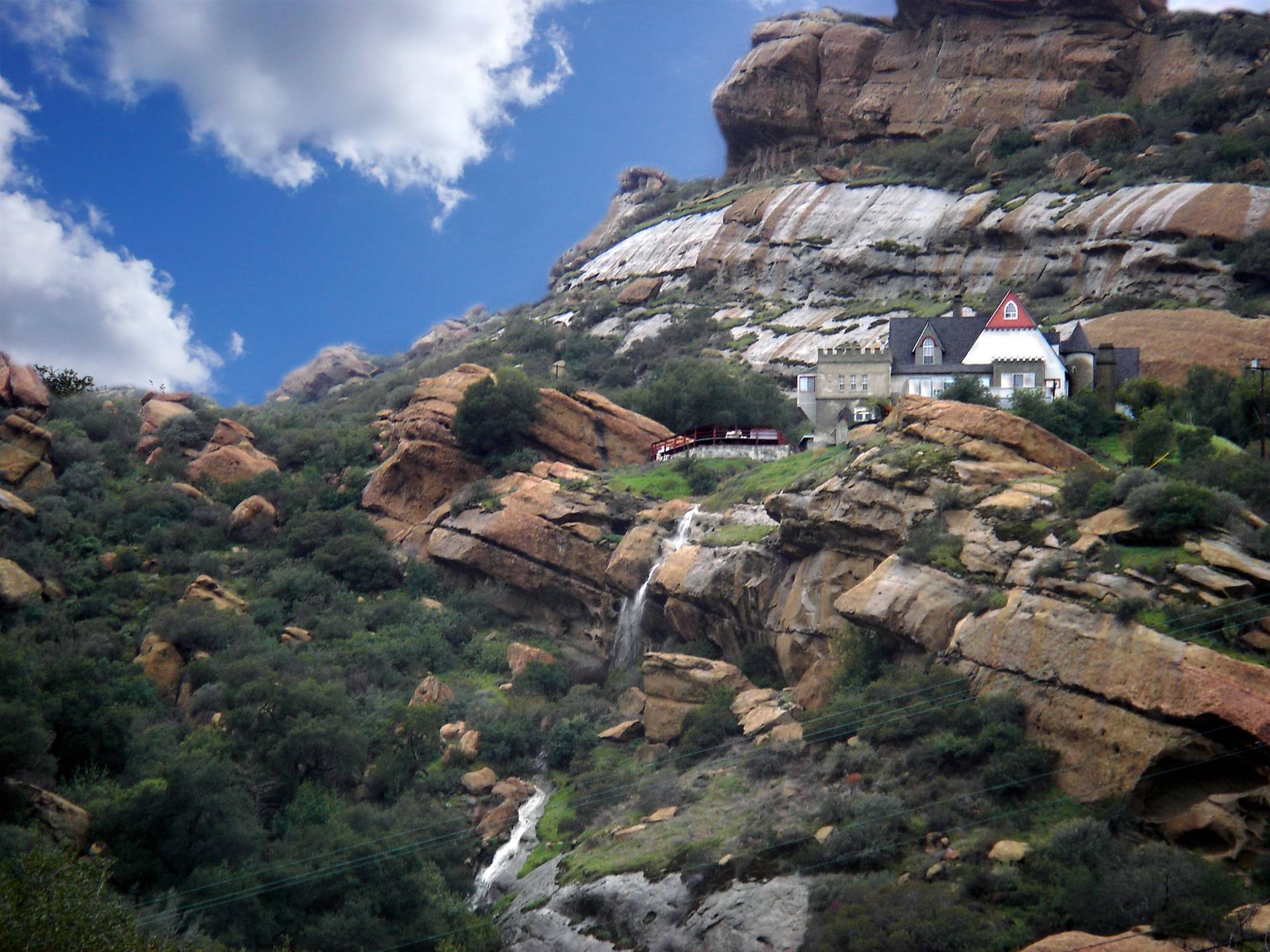 The Belafonte Castle on a Cliff

Surrounded by boulders with a waterfall meandering through the property, the “castle” is built of blocked concrete with corbeled arches and there is a corner viewing tower along with a pool and patio on top of a turret from which one can enjoy the waterfall as it splashes down the hillside.  At 4,000 square feet, the home has three bedrooms, three bathrooms, Australian walnut floors and Arizona river rock.  There are three fireplaces and gourmet kitchen with granite and cherry cabinetry, and a turret gym. 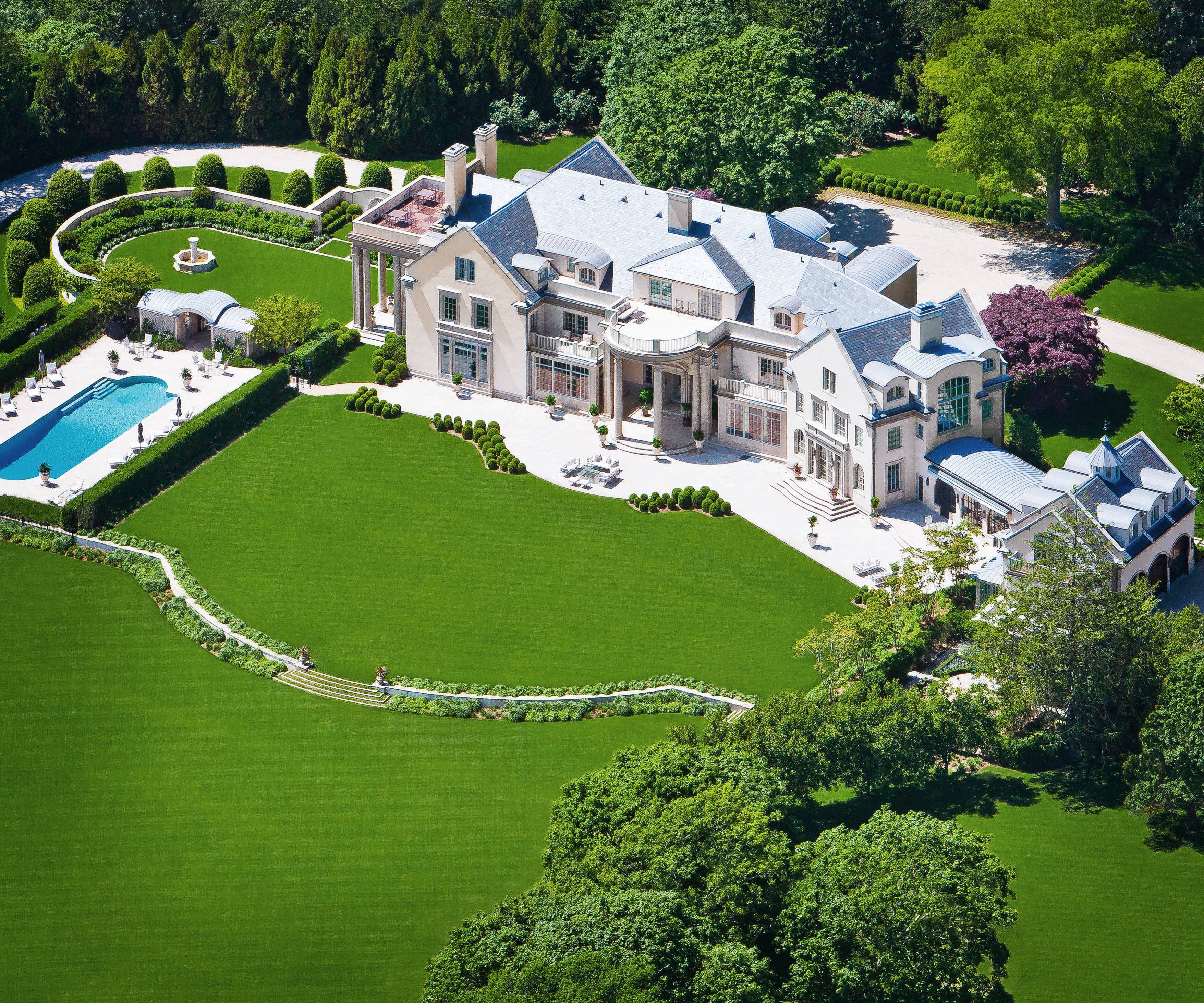 Though built at the height of the Gilded Age in 1887 as a summer home for the family and friends of Lombard, Ayres & Company and undergoing a major restoration in 1919 by its third owner, it finally went to its fifth owner in 1953, the Sisters of the Order of St. Dominic.  Over the next 52 years, the nuns used it as a school, a retirement home for aging nuns and a spiritual center.  Without the funds to keep up the property, it fell into serious disrepair.  Finally, unable to afford the taxes and sustain the property, it was sold to shoe designer Vince Camuto, co-founder of Nine West and his wife.  The Camutos spent the next five years in a massive renovation of the estate, which was orchestrated by Andre Tchelistcheff Architects and Carol Egan Interiors.

Today, it is the epitome of an eclectic summer beach house that has been preserved, enhanced and rebuilt to highlight the mansion’s best features.  At approximately 22,000 square feet, the interior encompases 11 bedrooms, 16 bathrooms, a ballroom now turned living room with multiple conversation areas, large eat-in kitchen, den, library, wine cellar, office, studio, study and formal dining room.  Situated on 7.6 acres, the lawns extend to the water’s edge on Mecox Bay with its own dock.  There is also a swimming pool, with guest house and sweeps of professional landscaping. 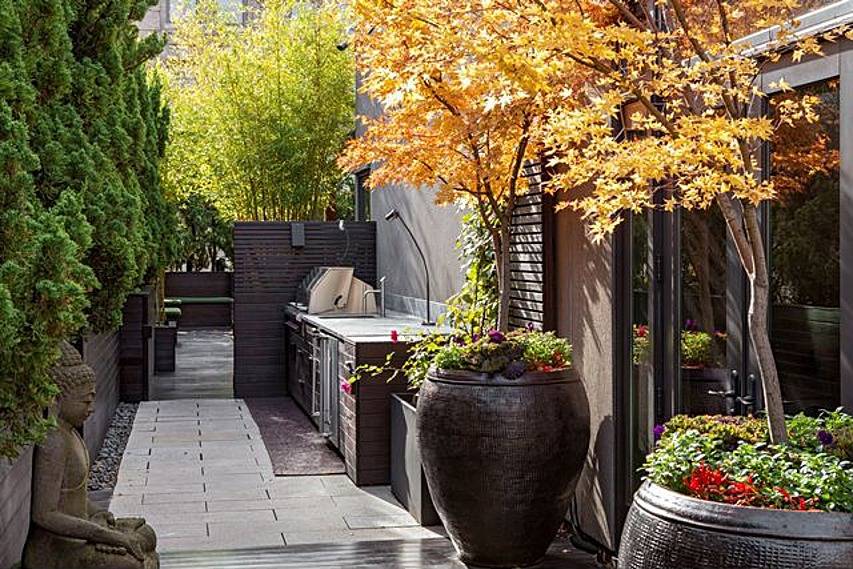 Kelly and Mark are at the top of the New York City celebrity list, but their SoHo duplex penthouse has not been as fortunate. The 6,792 square foot duplex has been on the market for almost a year and still looking for a buyer. The home is just as fabulous as its owners with 3,073 square feet of private terrace, outdoor kitchen and lush landscaping. Inside, there are five bedrooms and five baths with an impressive kitchen geared to feed any sized crowd. Considering the hectic schedule of the owners, there is an abundance of extra appliances. The laundry room has two sets of washers and dryers and the kitchen has two dishwashers and and three integrated Sub Zero refrigerators.

Though the couple purchased the penthouse in 2005 for $9.5 million, it is said that they put millions into a total redo, which also reconfigured the floorplan. It’s located in a red brick prewar boutique building with private keyed elevator.