Donald Trump’s former Greenwich estate is a virtual time capsule—a flashback to the opulent 1980s when gold leaf ruled and greed was good.

The massive, nearly 20,000-square-foot mansion where Trump and ex-wife Ivana lavishly spent their glory years, rests spectacularly atop a secluded peninsula on the Long Island Sound and recently hit the market for $54 million. Not bad for a town whose average home sale is $2 million. 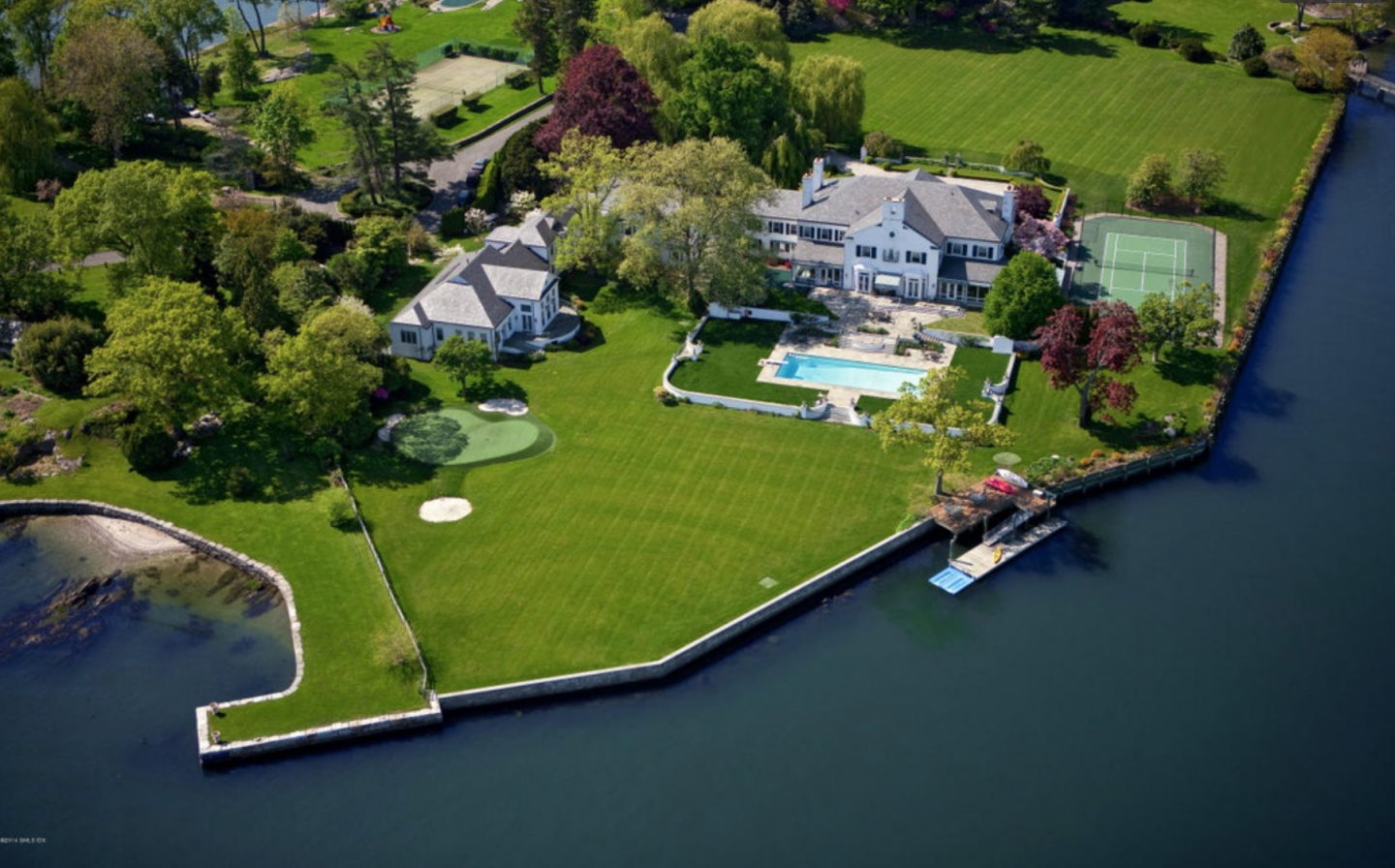 Situated on a private peninsula near the tip of Indian Harbor Point, this nearly 20,000-square-foot estate hit the market for $54 million. 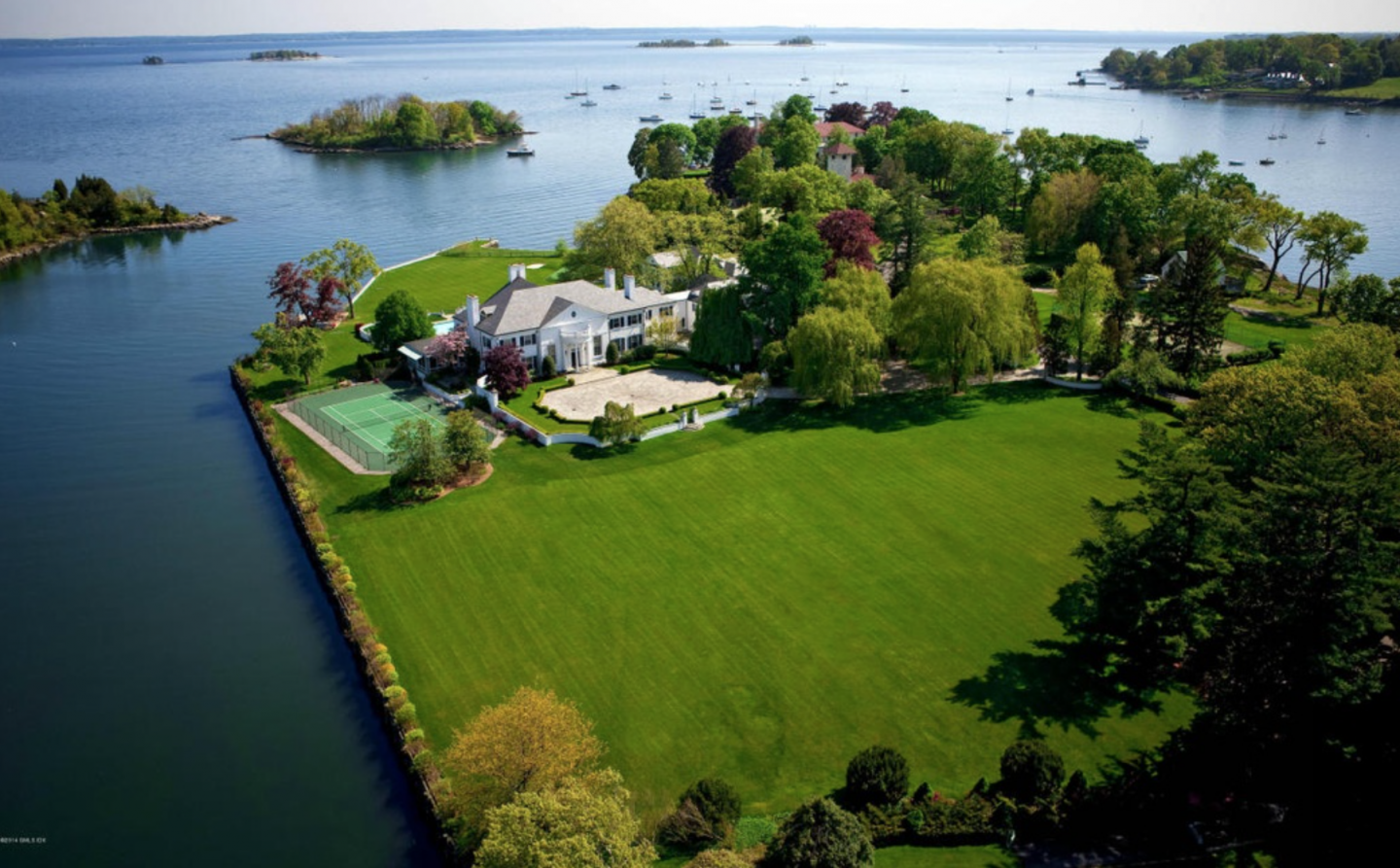 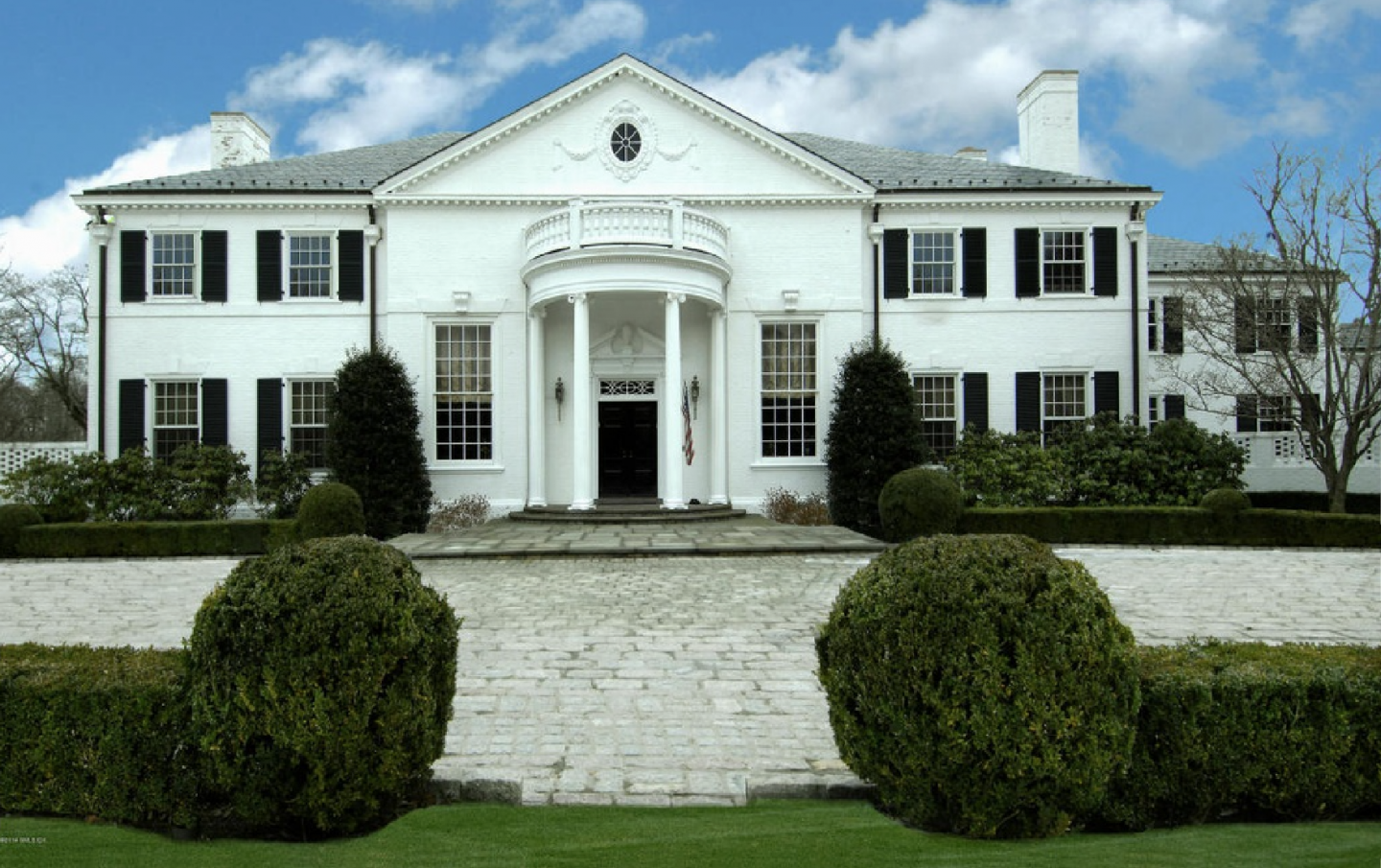 The Colonial property's exterior maintains its original charm, including this portico.

Ivana extensively renovated the Colonial mansion while she was simultaneously restoring the Plaza Hotel in Manhattan. The two had a common theme—opulence nearly as aspirational as the those of Gold Coast super estates across the Sound.

Although the current owner tried to tame the Trumps’ bling ambition with more recent remodeling (Tiffany glass windows, three-story rotunda with commanding views, etc.), the heavy-handed Trump card still garishly plays over the estate like a poker bluff daring to be challenged. 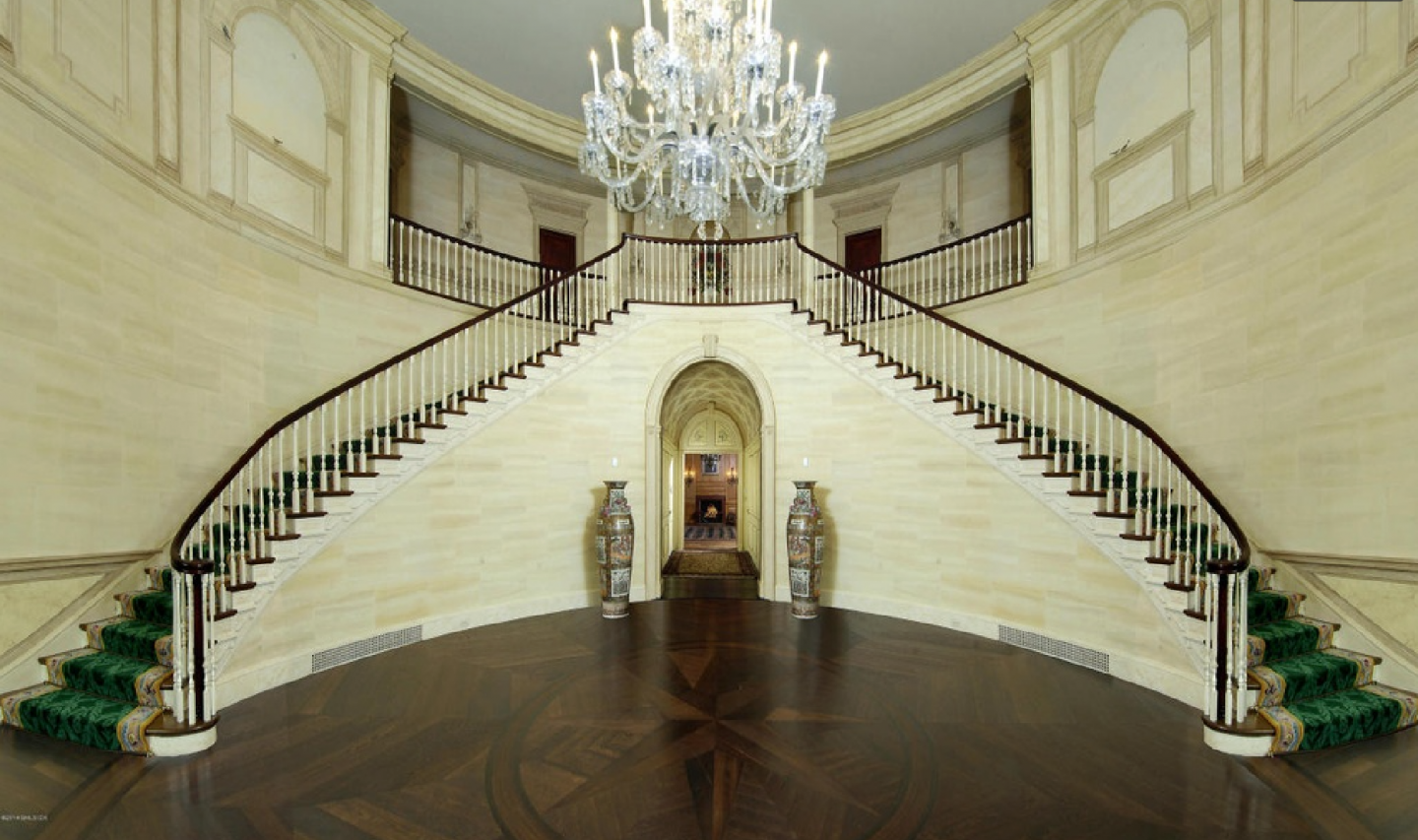 Grand double staircase in the foyer 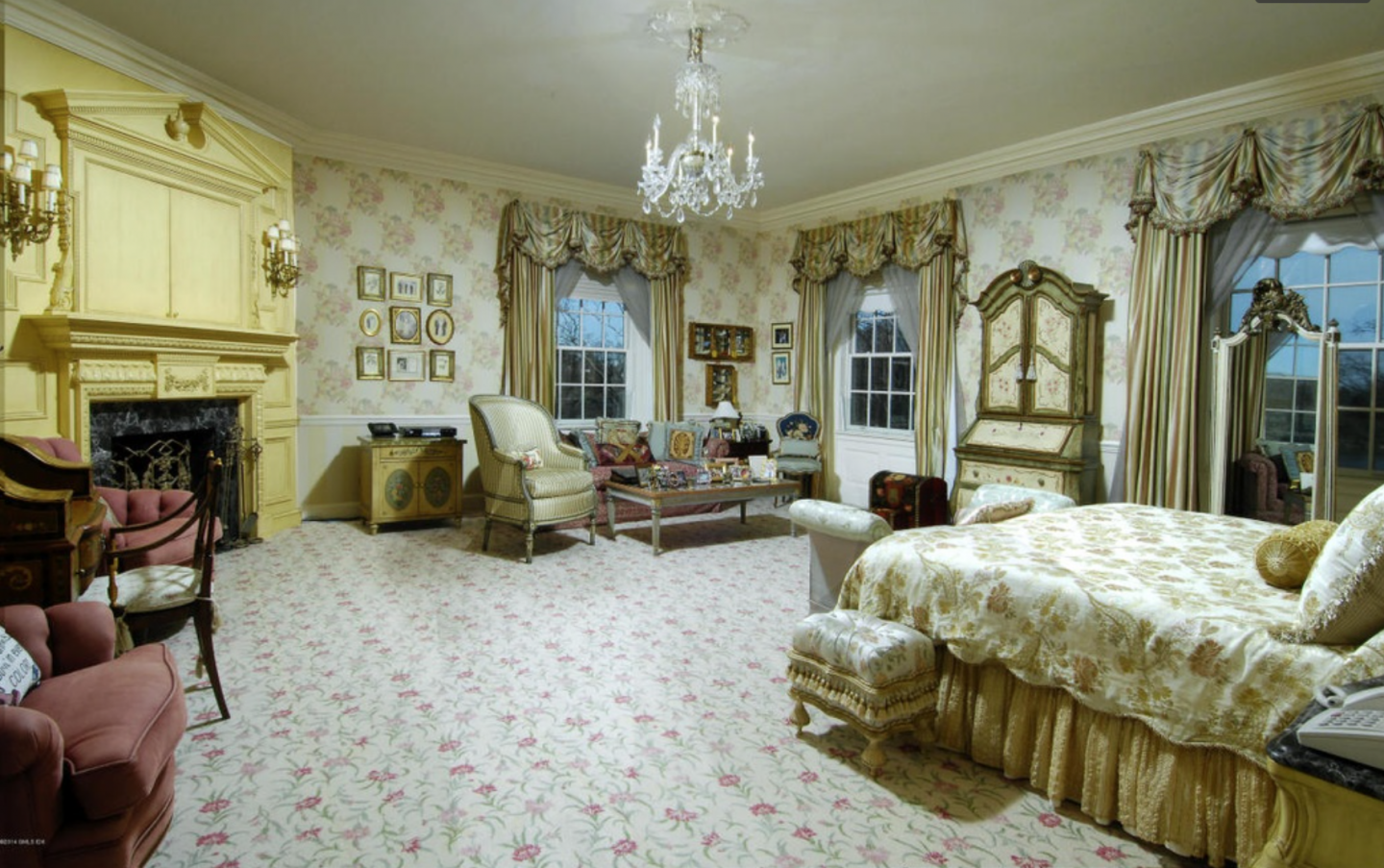 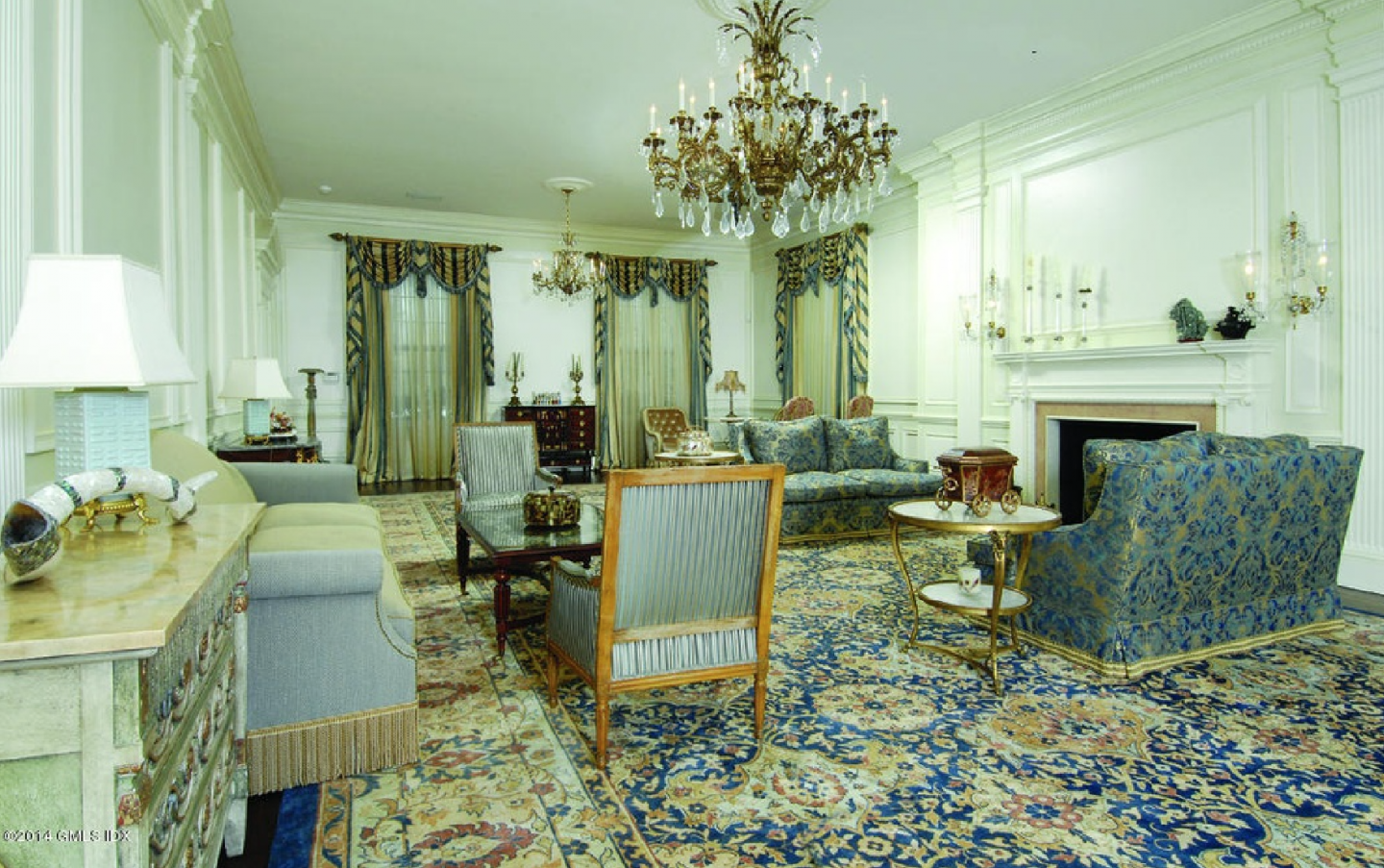 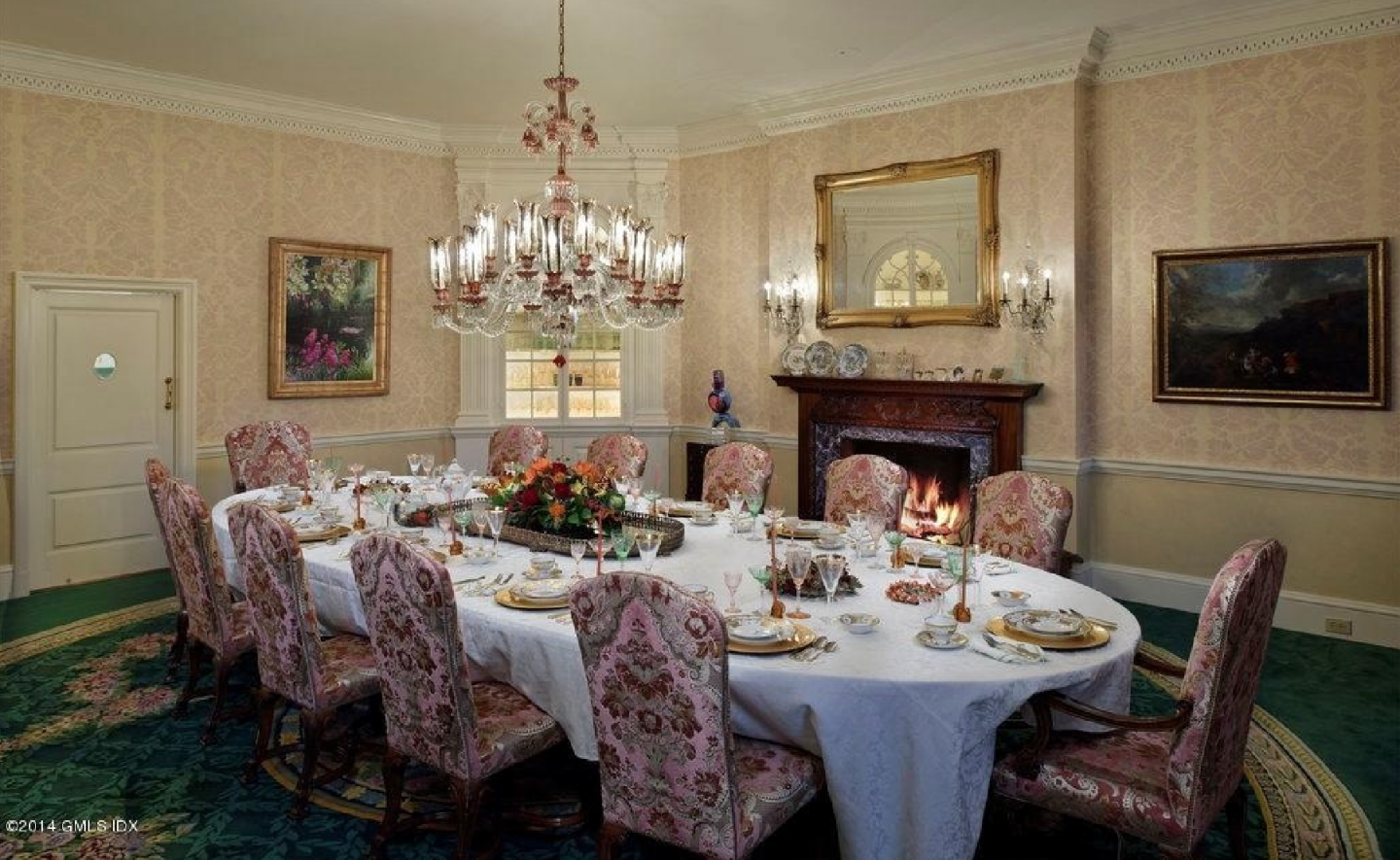 "Ivana did a lot of renovations," listing agent Tamar Lurie of Coldwell Banker told the Connecticut Post. “Décor-wise, it was all gold leaf—all of this was gold leaves all over the place. It was kind of dramatic.”

Would we expect anything less of the Trumps? Of course this was before he acquired “The Donald” moniker, pre-The Apprentice, and way before he diversified his ego with presidential exploratory committees.

Trump, a billionaire master of location, is the most famous real estate magnate. He knows the “art of a deal,” but the art of décor? Not so much. He can always blame that mistake on his ex who received the Indian Harbor home as part of their divorce settlement (before eventually selling the mansion herself). If it were anyone else, Trump might have barked, “You’re fired!” before the wallpaper dried—that is, if he knew such grandeur in the modern era (even the 1980s) is unbecoming. 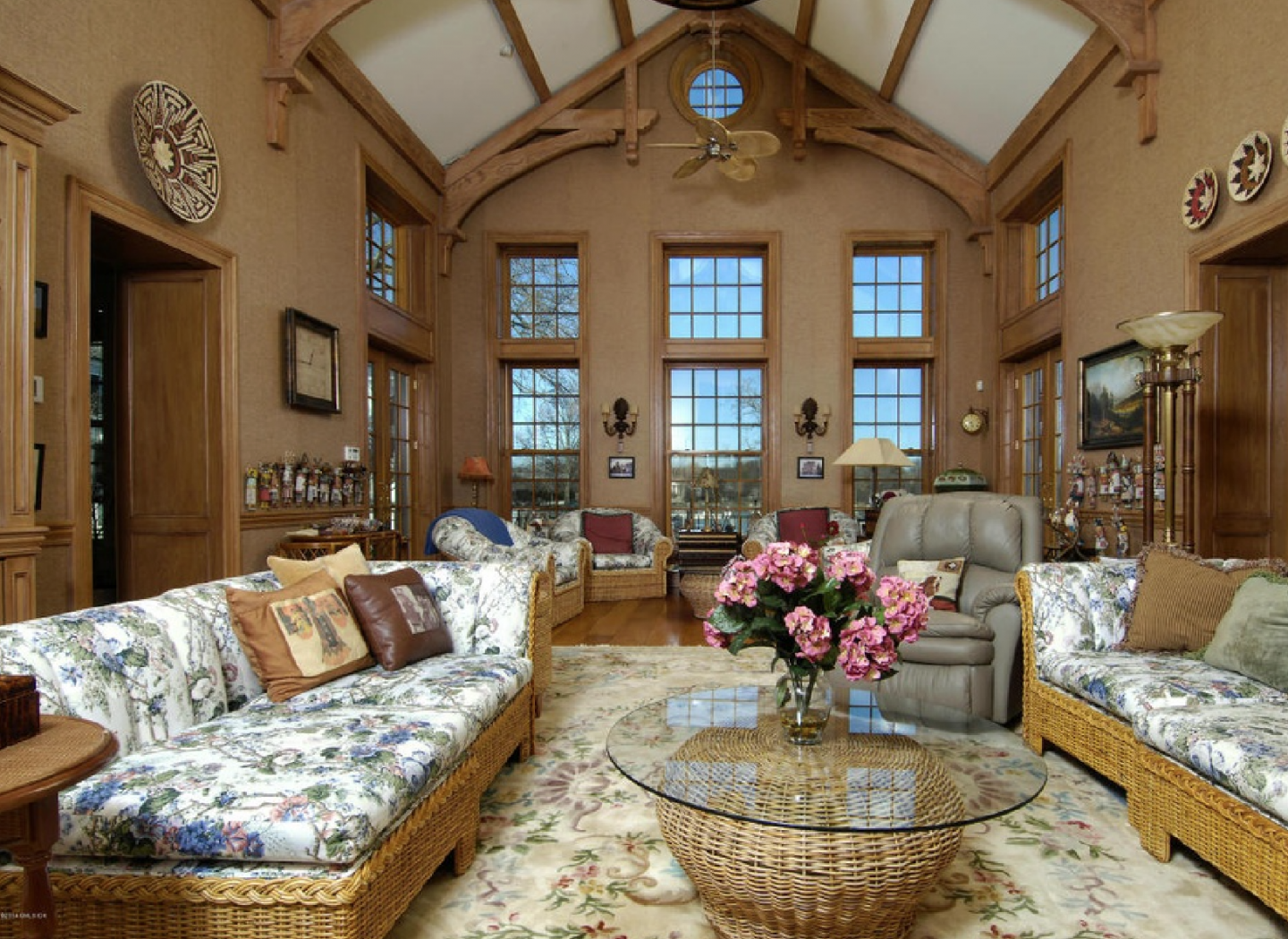 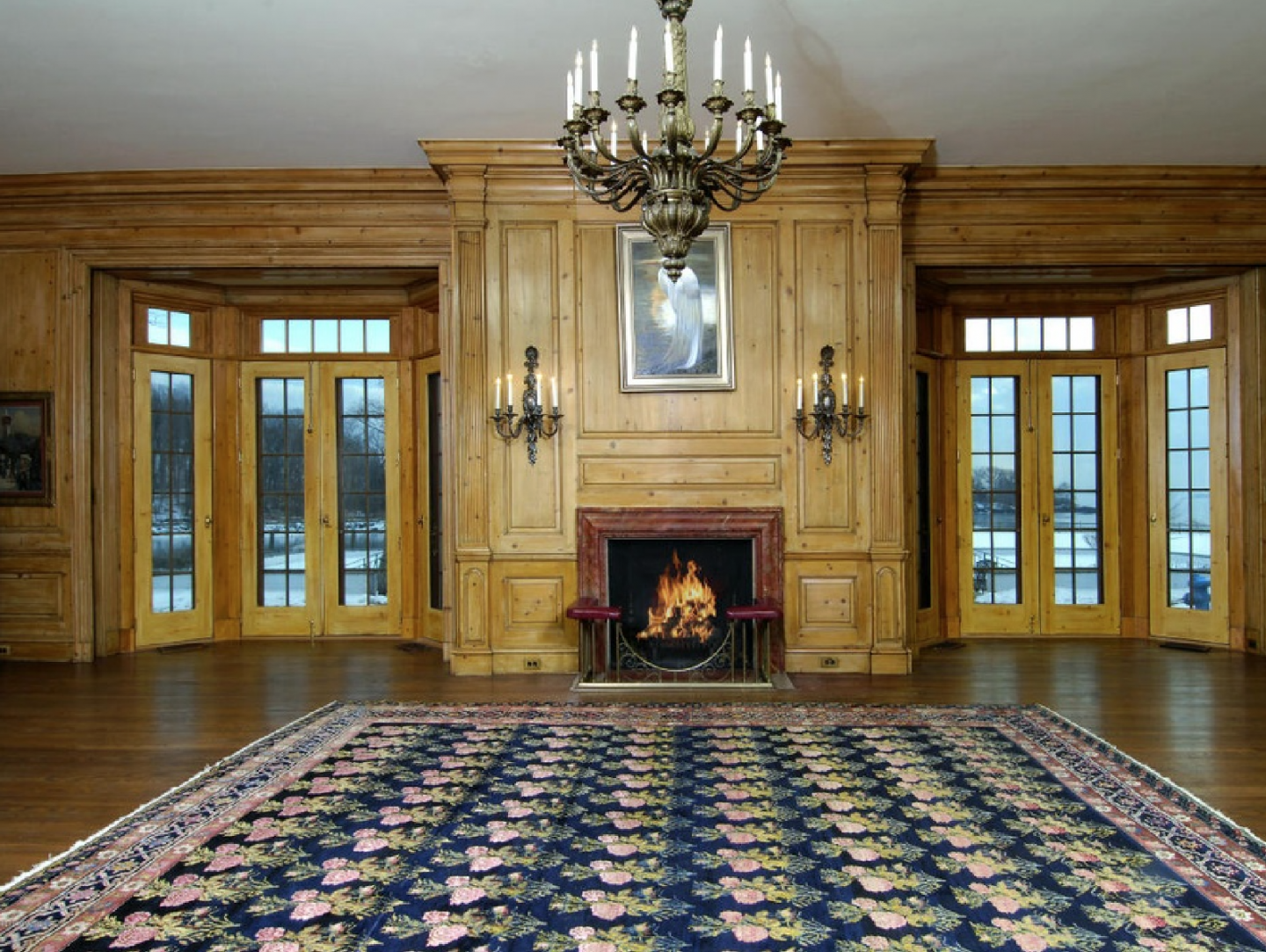 A wood great room featuring one of countless chandeliers throughout the mansion. 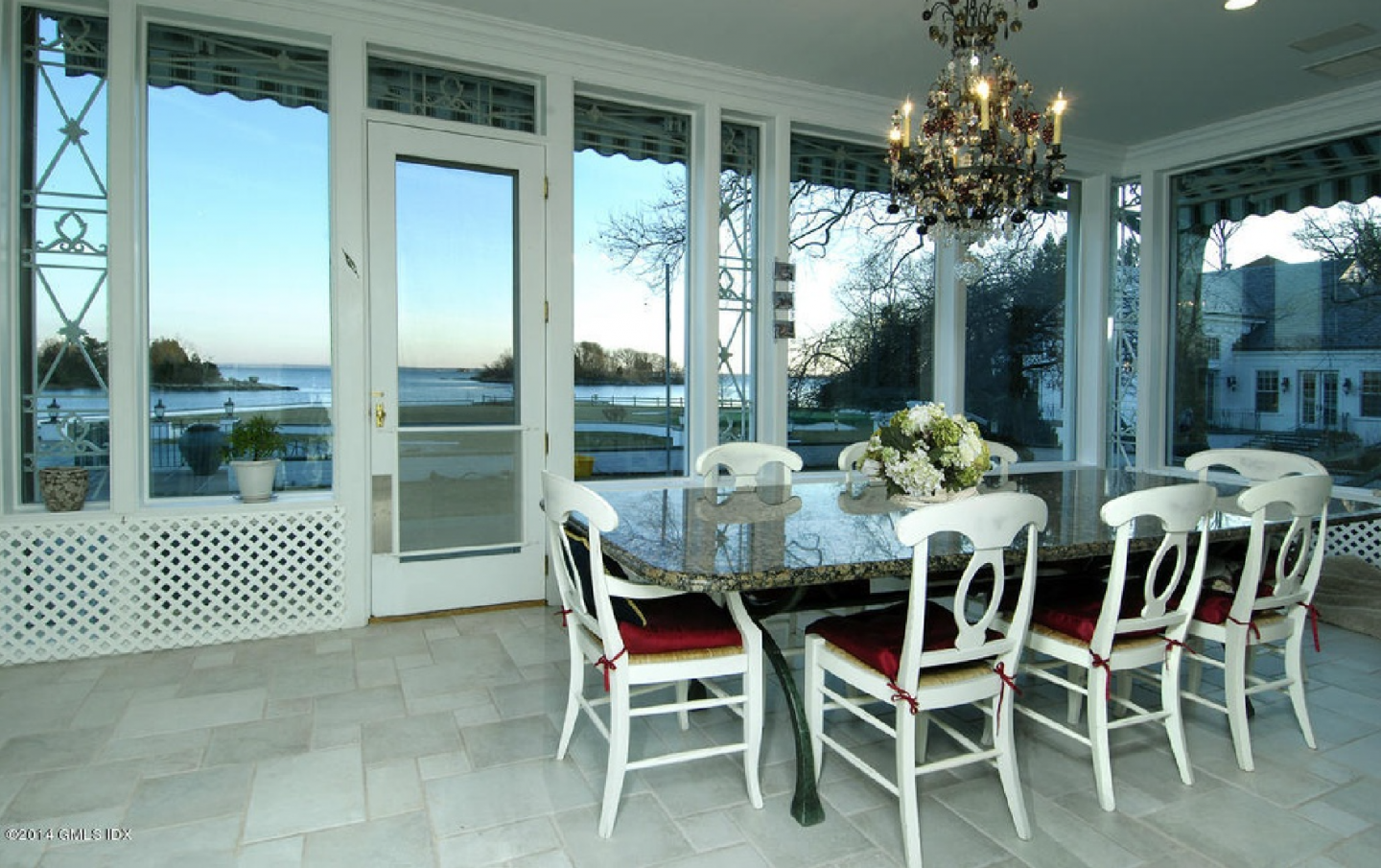 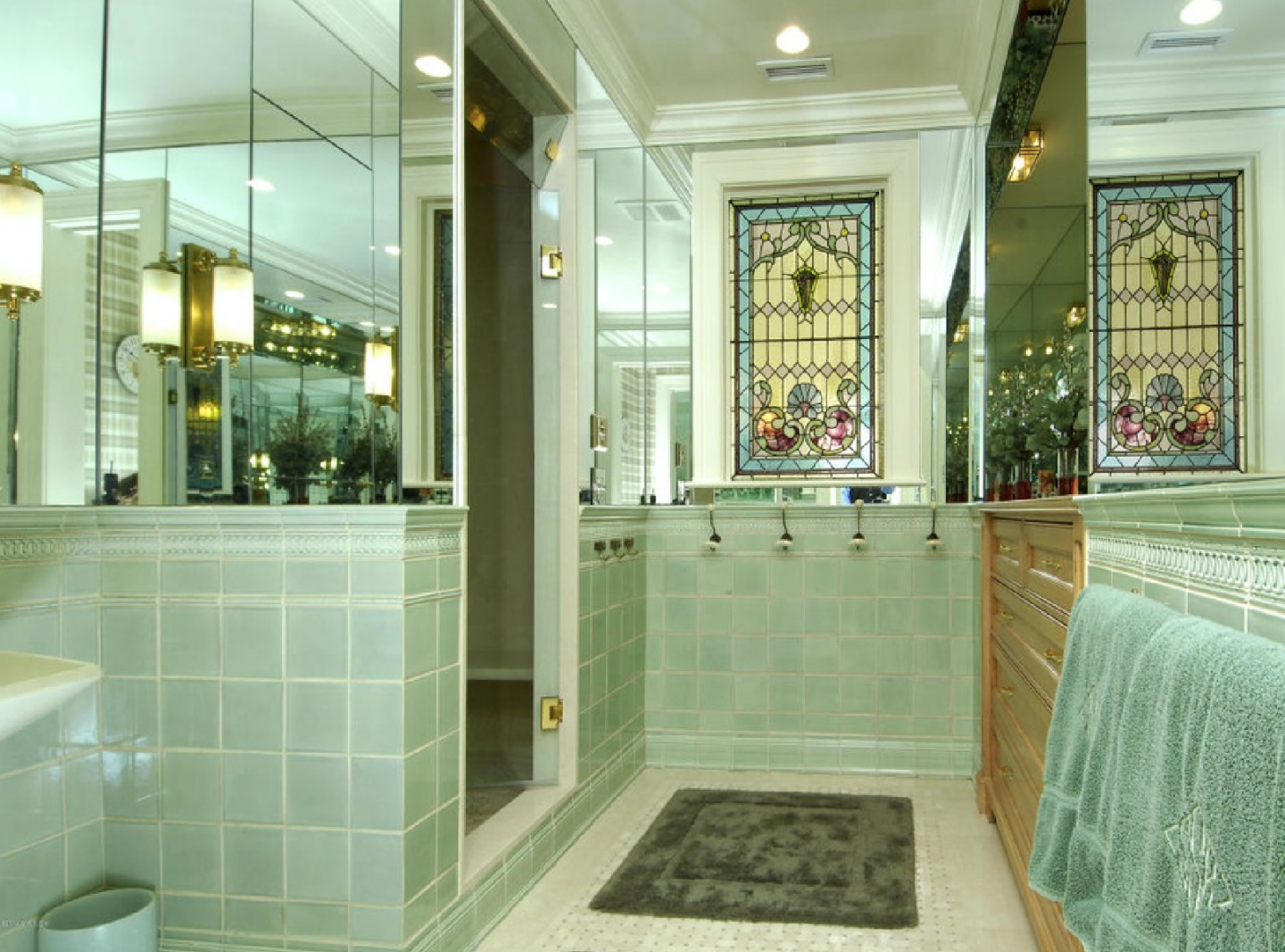 Location, pedigree and the estate’s roughly six acres play in the seller’s favor much more than the decorative ambitions of Donald and Ivana. The eight-bedroom, 11-and-a-half-bath property now boasts an additional 4,000-square-foot guest quarters with luxury suites, three staff apartments, a tennis court, putting green, indoor and outdoor pools, and a sauna. 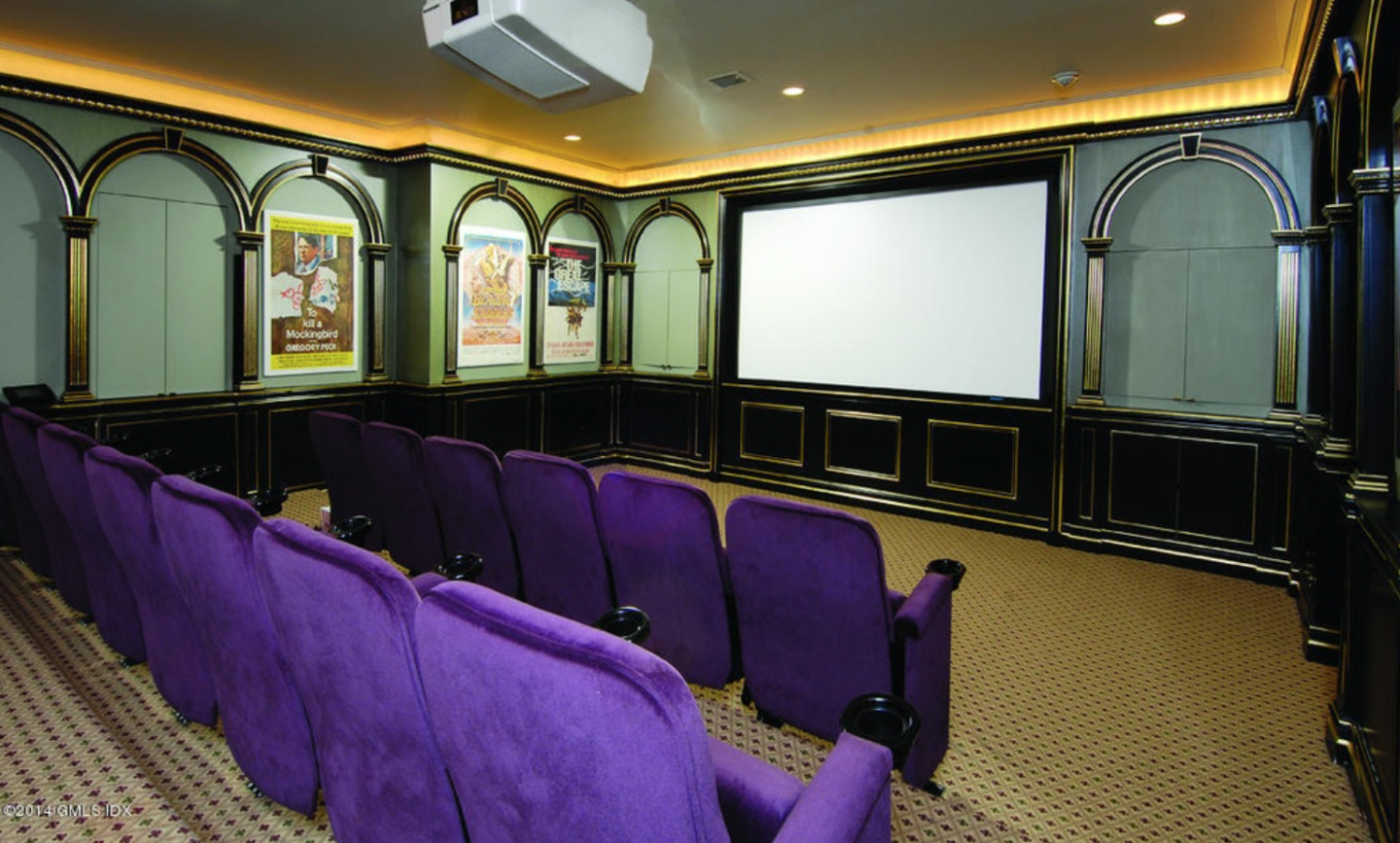 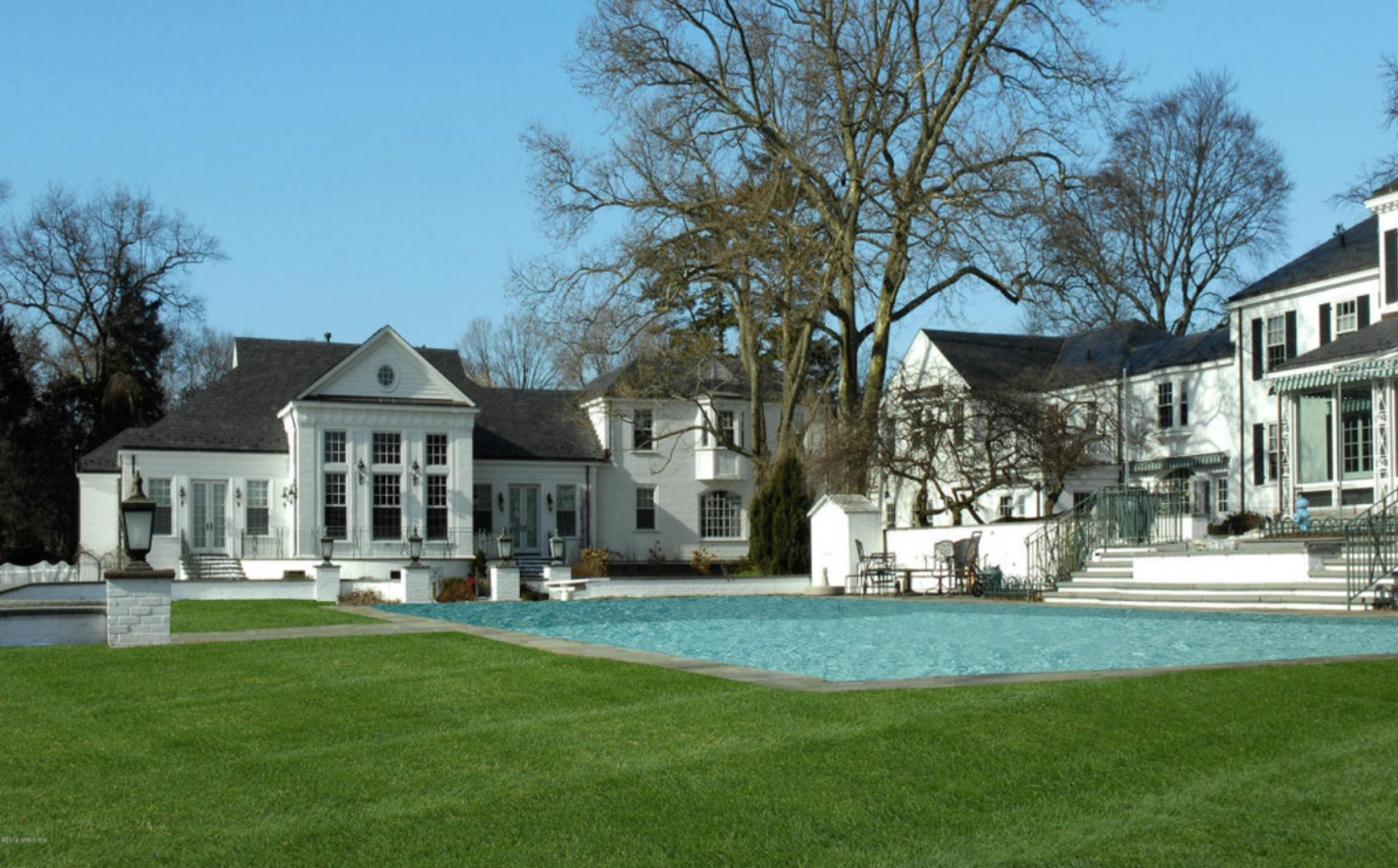 Adjacent to the pool is a new addition to the estate—a 4,000-square-foot guest quarters with luxury suites. 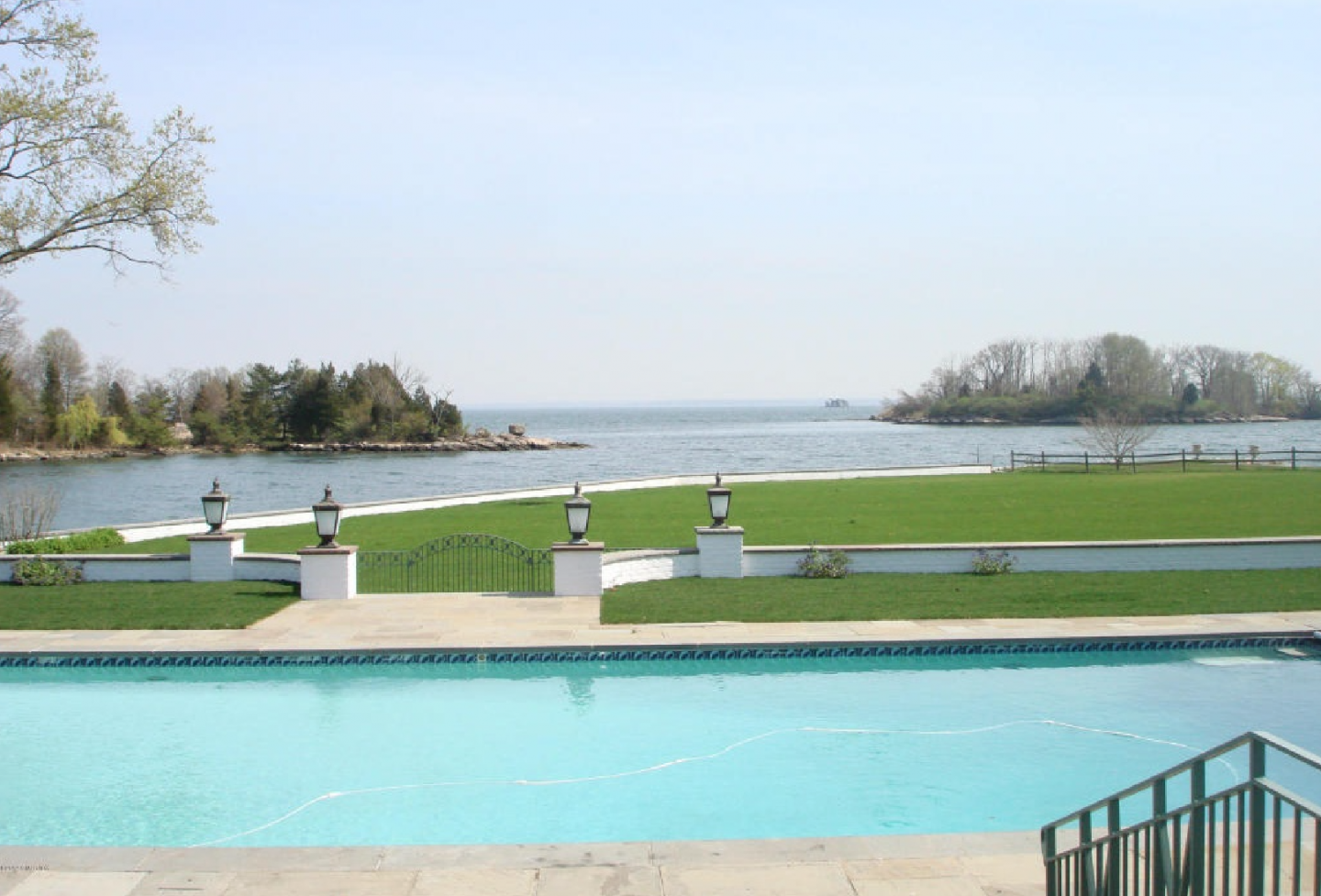 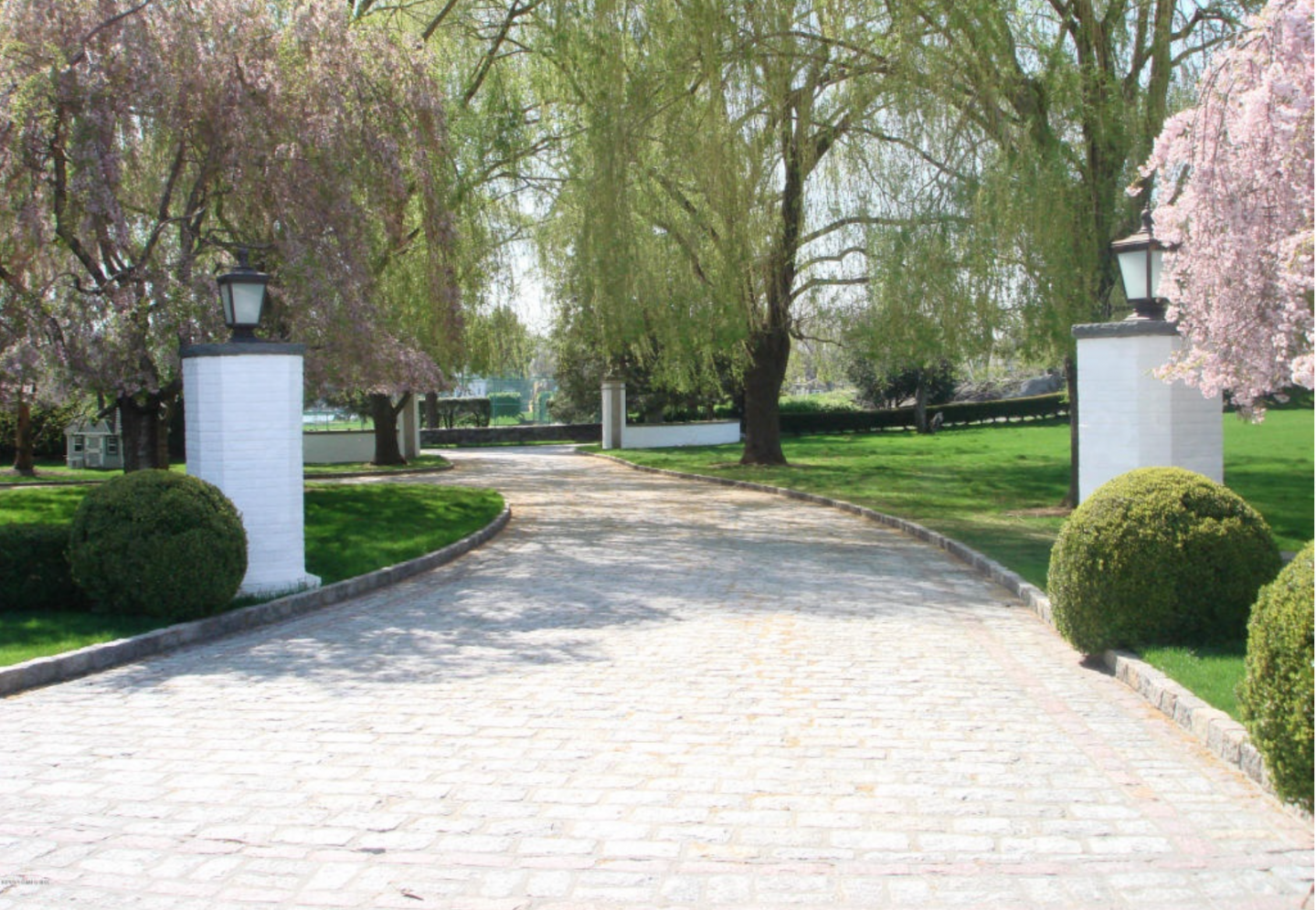 Donald Trump on the set of The Apprentice.

Fortunately for $54 million, you get to make this mansion your own—hopefully via a capable interior designer (and not merely a spouse). It will take a while to un-Trump this estate. To his credit, Donald Trump has moved on. In 2016, he may even vie for the only house he can’t buy—the White House. If he attains it, get the gold leaf ready for the Oval Office.