In high-density, urban landscapes, modern architecture of past decades has been shaped by boxy, formless towers. Residential structures are habitually designed to point toward the skyline and to rise higher than the ones built before. This kind of architecture, in the opinion of Ma Yansong, founding principal of MAD Architects, can be limited and monotonous, lacking complexity and originality.

“I think as an architect; you have to put yourself, your thinking into a larger context, which is the cultural context,” says Yansong, 41, a Beijing-born architect, whose design philosophy of “Shanshui City” sustains an architectural vision for a city that is shaped by a balance among humanity, nature, and an urban framework through organic, futuristic forms of architecture.

This architectural ideology encourages a constant relationship between nature and an urban environment; yet, it is more progressive than going “green.” “I think ‘green’ sustainability is very basic,” he explains. “I think we must bring the spirit and beauty of nature into the architecture as well.”

By subtly weaving nature into an architectural landscape of organic, fluid elements and shapes, MAD conceives, as the firm refers to it, “living architecture” in its structures. This stylistically abstract approach contrasts straight, uniform high-rises constructed in compact urban scenes like New York City, Beijing, and Hong Kong, with an emphasis on natural light and natural surfaces, among other organic details. 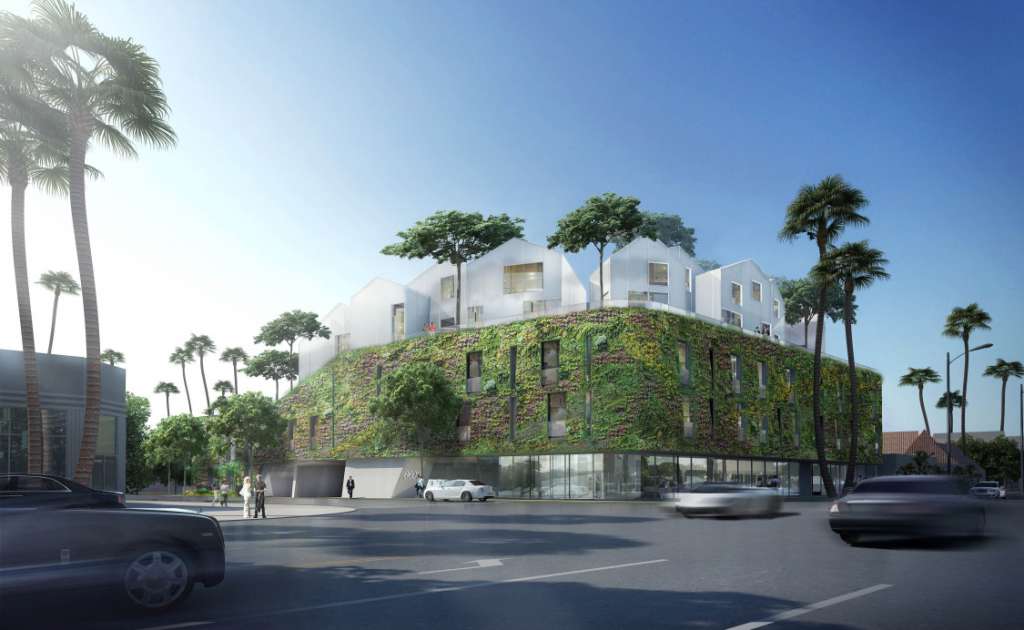 Since its founding in 2004, MAD has rooted its projects throughout populous cities in China, Japan, and France, as well as in a number of other countries. The architectural firm has broadened its designs to North America with the unfolding of its first U.S. project, an 18-unit residential village set above commercial space, at 8600 Wilshire Blvd., now under construction, in Los Angeles. 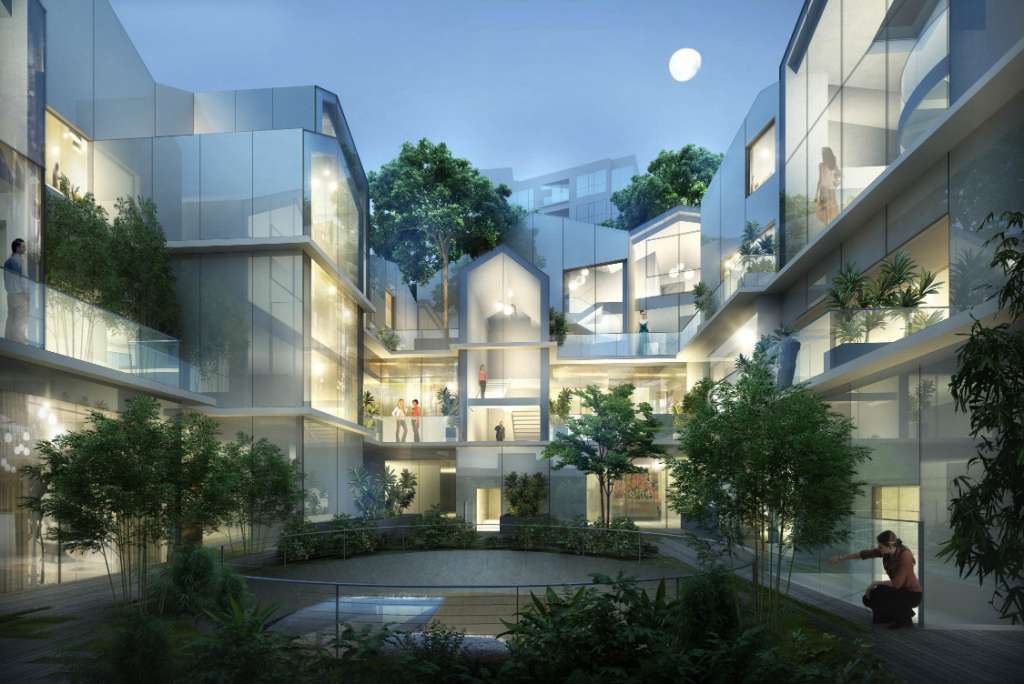 In a rendering for 8600 Wilshire Blvd., tall trees and shrubs are sprouted sporadically throughout the patios and balconies of clustered residences

In the proposed design of the building, composed as a curvilinear structure meant to resemble a sinuous hill, tall trees and shrubs are sprouted sporadically throughout the patios and balconies of clustered residences. Yansong thought to soften the construction by mimicking the hilly terrain of the L.A. area.

“I don’t want it to just be a condominium [built] on urban ground,” he says of the L.A. project. “I want residential buildings to speak to the natural environment around.” A jagged strand of two studios, townhouses, villas, and condominiums­­ is curved, accordion-like, around a concealed communal garden. Ensuring privacy, the street-side exterior of the residences is screened by a water-efficient wall of native, drought-tolerant succulents and vines. The green wall then slopes up along Wilshire Boulevard to reveal glass storefronts at ground level for public access.

This harmonious design is seemingly more conceivable in L.A.’s less dense urban fabric than it would be in a setting like New York City, where buildings are dimensionally restricted, and in most cases, must be built vertically. But even in a confined landscape, an urbanized concept that is balanced and forward-thinking can be achieved, Yansong suggests. Indicating The High Line as an example, he comments, “Although it’s horizontal, it’s transforming infrastructure into a park… I think eventually the vertical structures have to change as well. It’s making the city dimensionally more alive, more engaging, with more nature.” His architectural vision will soon be implemented on the East Coast. With expanding offices in Manhattan (and also in L.A.), MAD is discussing residential projects in New York City and Washington, D.C. 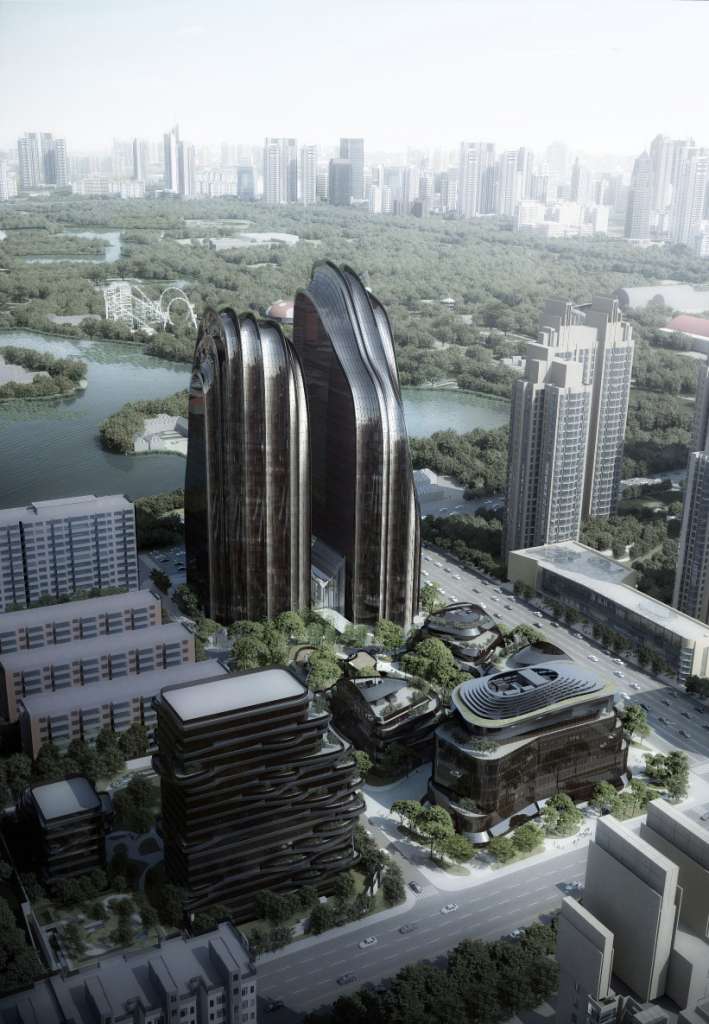 Much resembling Central Park, Beijing’s Chaoyang Park, situated within the city’s central business district, is framed by MAD-designed Chaoyang Park Plaza, a collection of mixed-use buildings dispersed along the park’s southernmost edge. In this urban valley of sculptural towers and structures resembling natural formations, Yansong’s Shanshui City is realized. Ridged edges, curved forms, and seamless shapes in the asymmetrical edifices imitate natural scenes seen throughout China’s landscape. Four office buildings, constructed to be smooth and round, appear as eroded river stones. At the top of two towers, stacked terraces are sculpted as public gardens, from which the public can look out and embrace the symbiotic urbanization. 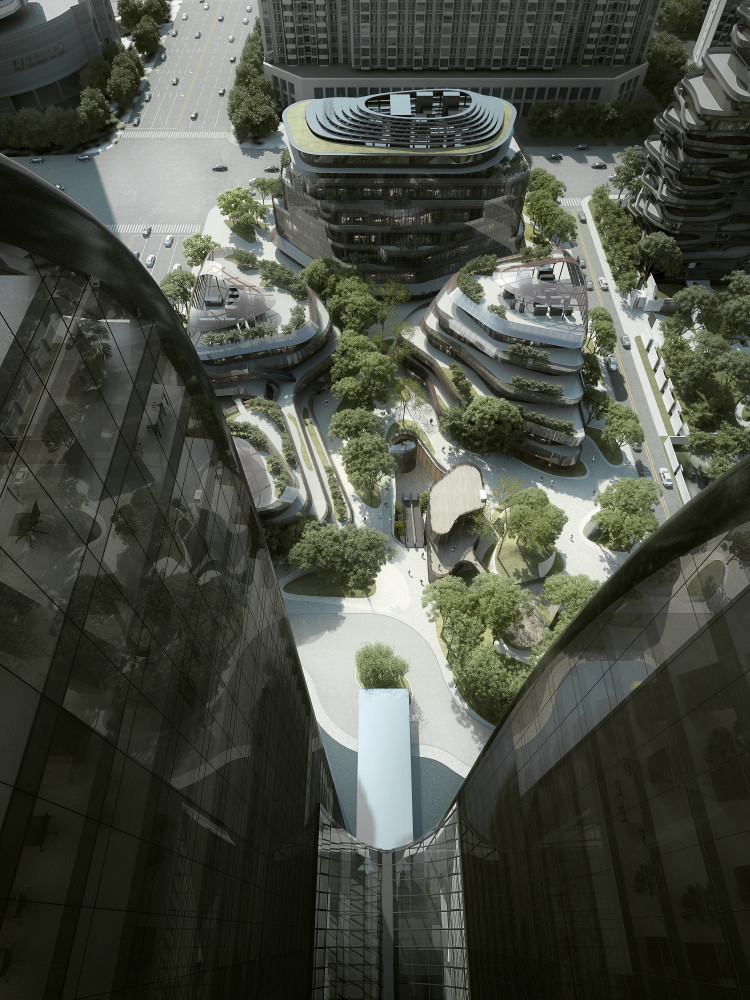 Before conceptualizing a building design in a particular location, Yansong visits its potential site and envisions it there, while interacting with the surroundings and interpreting how to relate it to the local environment. “I think it’s important to have a very emotional reaction to a place when I’m there,” he says. This early stage in his design process is very personal. It is the foundation for each project, before abstract lines and shapes are sculpted to embody a harmonizing of humanity, nature, and modernized architecture in Shanshui City.