With nearly twice as many skyscrapers as Manhattan, Asia’s “World City” is dense, short on land, and home to some of the world’s priciest real estate. Currently, average prices range from $1,558 per square foot to more than $12,000 per square foot at the high end. And despite a number of recent government measures intended to dampen transaction volumes, the residential sector has proved largely immune to the downdraft. Prices rose 13.5 percent last year and eight per cent in the first half of this year, according to data from Hong Kong’s Rating and Valuation Department. The most anticipated luxury development since Frank Gehry’s Opus building is a new project from Wheelock Properties called "Mount Nicholson." Located on Mt Nicholson Road on The Peak, Hong Kong’s most coveted and prestigious address, the project will include detached villas and apartments with sweeping views of the city skyline and Victoria Harbour. Architects RAMSA have created buildings with a classic profile, while designers Champalimaud, David Collins Studio, and Yabu Pushelberg are styling plush model homes ahead of the sales launch in November. The first phase of detached houses range from 6,000 square feet to 10,000 square feet with private driveways and private pools. Prices haven’t been announced, but large homes on The Peak generally trade for upward of $50 million. Developers say they are confident multimillion-dollar properties are still in demand due to limited supply, though some experts warn that an economic slowdown marked by falling retail sales and a softening Chinese mainland economy could adversely affect home purchasing power in coming years. 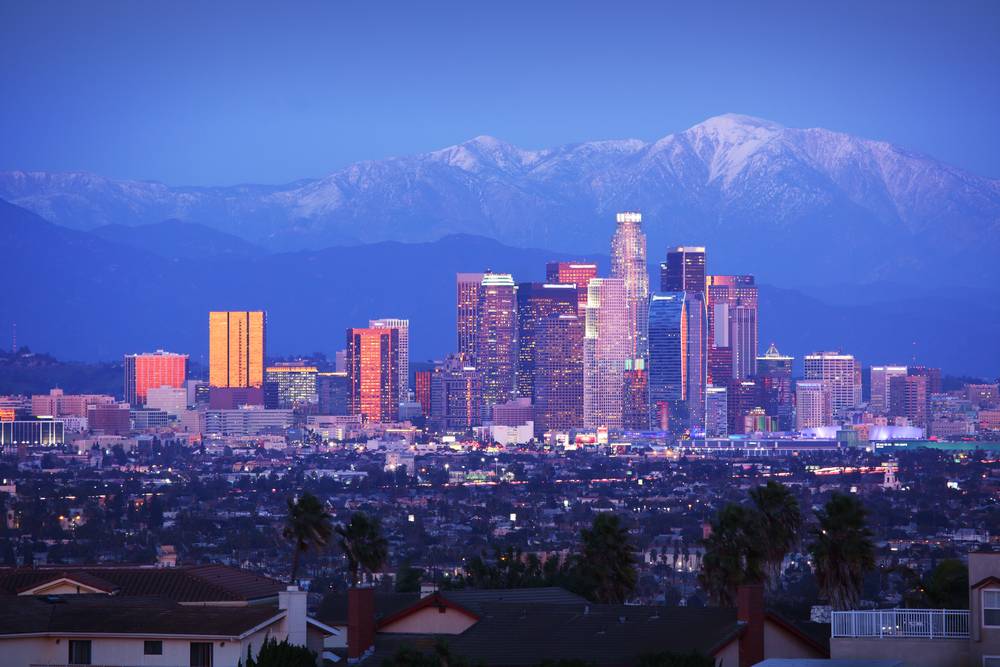 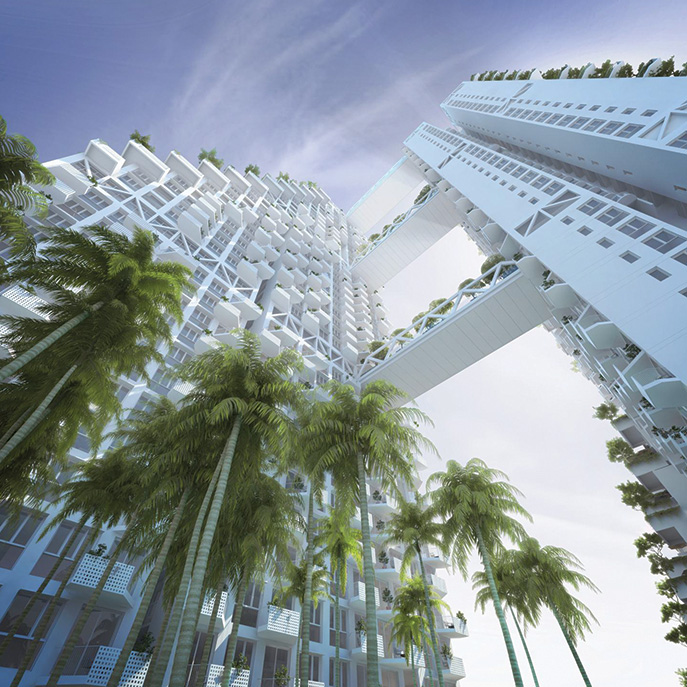 Following a construction boom that produced some of Asia’s most expensive and luxurious condos, Singapore’s government introduced a series of cooling regulations starting in mid 2013 that included restrictions on bank lending and higher stamp duties (18 percent for foreigners) that resulted in modest price declines in the broader market and more acute drops at the high end. By some reports, prices are down 20 percent from its 2012 peak, and even more on Sentosa Island, which houses exclusive waterfront villas, yacht clubs, golf courses, and a reclaimed beach. While the city-state maintains tight control of the real estate market, it is remarkably open to new and daring architectural designs and has approved daring projects by Moshe Safdie, Daniel Libeskind, and Zaha Hadid. Safdie is best known for the iconic Marina Bay Sands but also designed Sky Habitat, a residential tower located north of Singapore’s Central Business District. The project comprises two staggered blocks linked at the base and three bridges that connect the upper levels. The lower two feature landscaped gardens, while the upper bridge contains an elevated swimming pool with sweeping city views. In response to the tropical climate, Safdie assigned multiple exposures to each apartment, many of which also feature individual balconies, roof terraces, and gardens. Sky Habitat is developed by CapitaLand Singapore, Mitsubishi Estate Asia, and Shimizu Investment (Asia). Remaining units range from two to four bedrooms, starting at $958 per square feet. 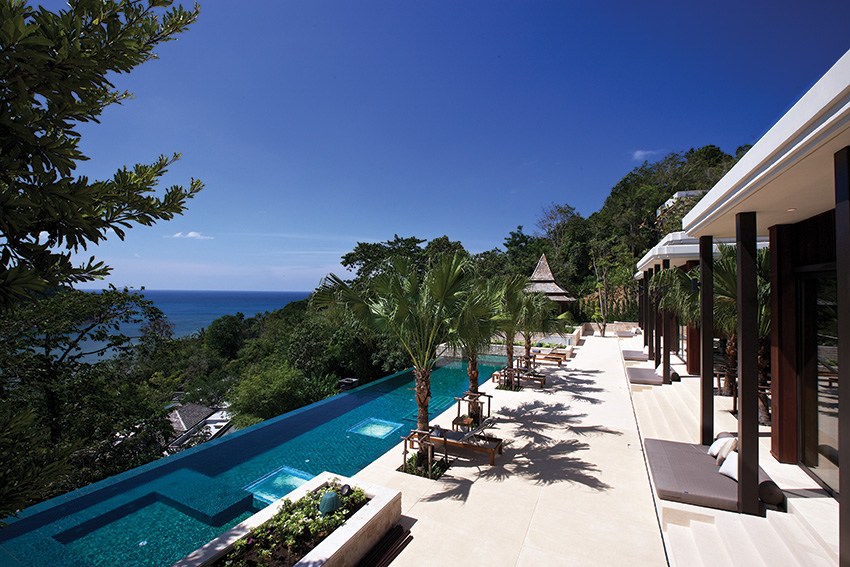 A popular second-home destination for wealthy Asians and expatriates, Phuket contains some of Thailand’s most expensive real estate. Large private villas overlooking the Andaman Sea are priced upward of $10 million and often feature several living pavilions, terraces, and infinity pools. While traffic along the main road is notoriously congested, it eventually leads to a host of exclusive island amenities, including international schools, first-rate hospitals, championship golf courses, yacht marinas, and trendy supper clubs. The international airport is also planning a private jet terminal. Today, much of the land overlooking Kamala, Cape Yamu, and Naithon beaches is already built up, but land is still available on Phuket’s quieter northwest coast. This is the site of The Residences by Anantara Phuket Layan, a villa project by Minor International. Overlooking Layan Beach, the project’s sprawling villas range from around 18,000 square feet to 42,000 square feet, and each has a 68-foot infinity pool. Owners have access to pampering services, such as in-home spa treatments, private wellness sessions, and in-villa dining from chef Umberto Piccolini. There is also a 90-foot Sunseeker yacht available for charter with pickup from the Anantara private beach. Villa prices start at $6 million. Since foreign homebuyers cannot own land in their name in Thailand, buyers typically purchase through leaseholds for a period of 30 years with two opportunities for 30-year extensions. 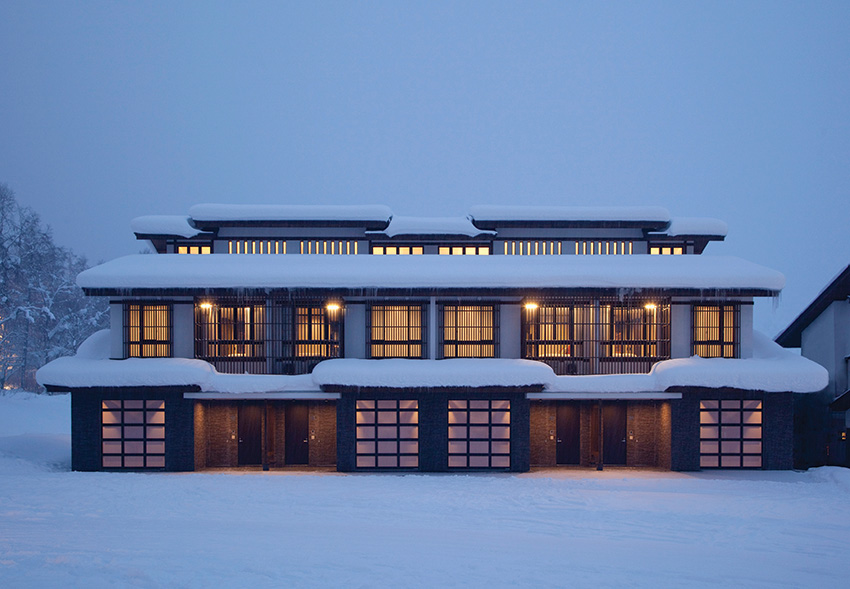 Famous for its plentiful powder and iconic Mount Yotei, Niseko, located on Japan’s northern island of Hokkaido, is one of Asia’s most popular ski resort destinations. Young, savvy Australian entrepreneurs with a passion for powder initially drove development in the area, but the market has since changed. Today, investors from around Asia and beyond hope to transform the place into a luxury destination on par with resorts in Europe and North America. Boutique, high-end developments with Japanese design touches and access to the slopes are proliferating in Niseko. Some also cater to golfers during the summer season. Malaysia’s YTL Corporation recently opened Niseko Village, a year-round resort that includes three-bedroom townhouses with storage for ski and golf equipment linked to an underground garage. The Kasara townhouses average around 2,700 square feet of living space and are priced at just under U.S. $1,000 per square feet. Japan is the only country in the Asian-Pacific region with no restrictions on foreign ownership. This is a draw for foreign investors, as the current purchasing power against the yen. “The prospect of Niseko is very promising given the strength of international currencies against the yen dollar coupled with low interest rate environment and less-restrictive governing laws,” says Richard Lee, Director of Communications at YTL. 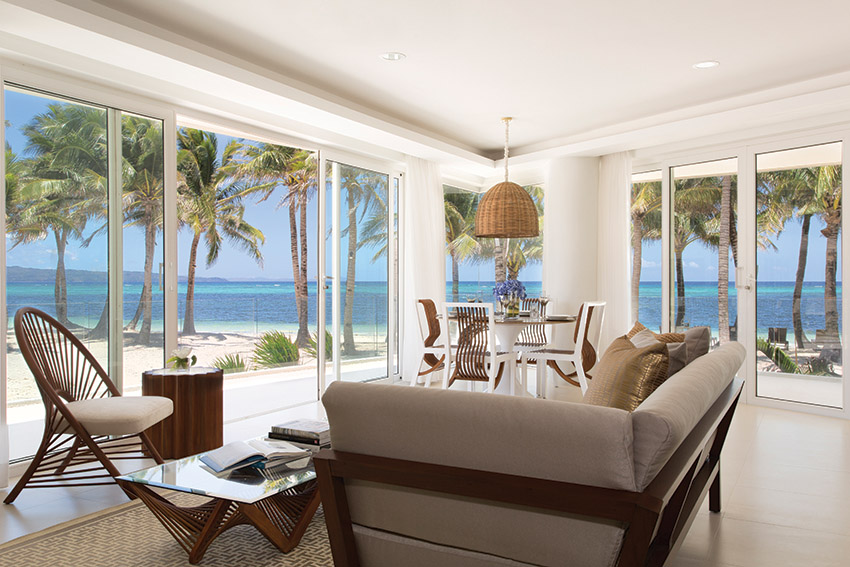 The Philippines is one of Asia’s fastest growing markets, and property prices have surged in recent years. In Manila’s Makati district, they have risen nearly 50 percent since the first quarter of 2008. Development is also spreading to some of the country’s 7,100 tropical islands, though only a handful of these are easily accessible. On Boracay, a small island 200 miles from Manila that has become internationally-renowned for its powdery-white sand beaches and laid-back ambience, a new runway is scheduled to land larger international flights by 2016, and resorts are being built to accommodate increased demand. The island’s first branded resort is Aqua Boracay by YOO, the company co-founded by designer Philippe Starck and John Hitchcox. The project is located on Bulabog Beach and features 168 residences with three swimming pools, a day spa, a health club, and concierge services. The first two phases have already sold out, but a range of third phase apartments are still available, and at a relative bargain when compared with other beach homes around Asia. Similar properties in Phuket might sell for $2 million, while a one-bedroom apartment at Aqua Boracay by YOO is listed for $350,000. 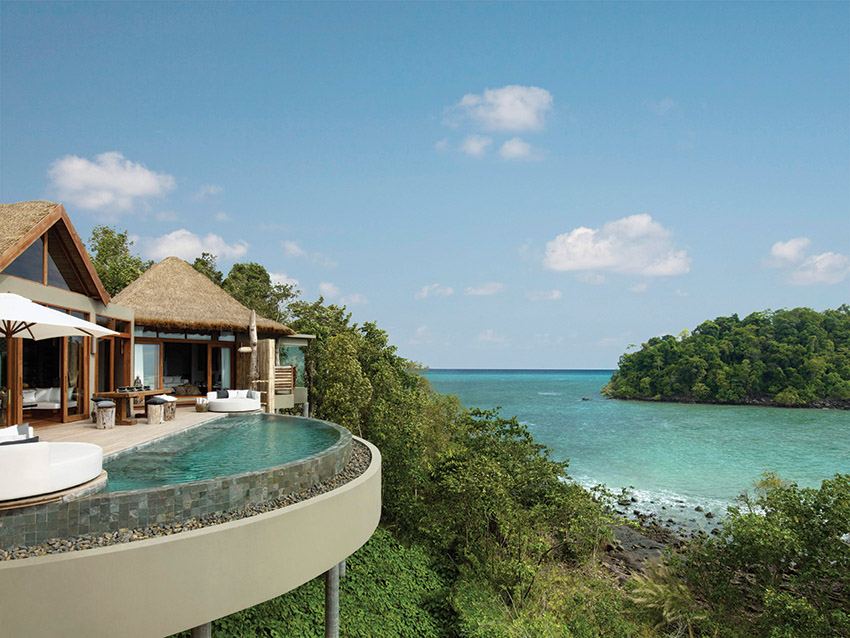 Cambodia remains a frontier market and is still catching up to neighboring Thailand and Vietnam, which have rapidly developed their economies, export markets, and tourism industries. But while lagging infrastructure makes land travel slow and laborious, Cambodia’s private island resort rivals other leading luxury resorts in the region. Song Saa, Khmer for “The Sweethearts” is the country’s first private island retreat and comprises two islands. The larger houses 27 private villas, some built on the water, some island in the jungle and the other is uninhabited but connected via a curving boardwalk. Another bridge leads to an over-water bar and restaurant. The resort is designed partially using recycled materials––driftwood, wood from old boats, scrap metal, and stone––for a vibe that is rustic, yet refined. Just one of the villas remains for sale, a two-bedroom jungle villa with a large infinity pool and views of the ocean and neighboring Koh Bong Island that is on the market for $995,000. “The owner of the villa will be entitled to 30 nights usage of the villa per year and will receive a return from the resort,” says Development Manager Edward Gibbons, who is based in Cambodia. Song Saa is reached via a 35-minute ride in a private speedboat from Sihanoukville, a seaside city 140 miles from the capital, Phnom Penh, or by helicopter to nearby Koh Rong Island. While foreigners cannot purchase land in Cambodia, the land can be held on long (renewable) leases and through majority locally-owned companies incorporated in Cambodia.