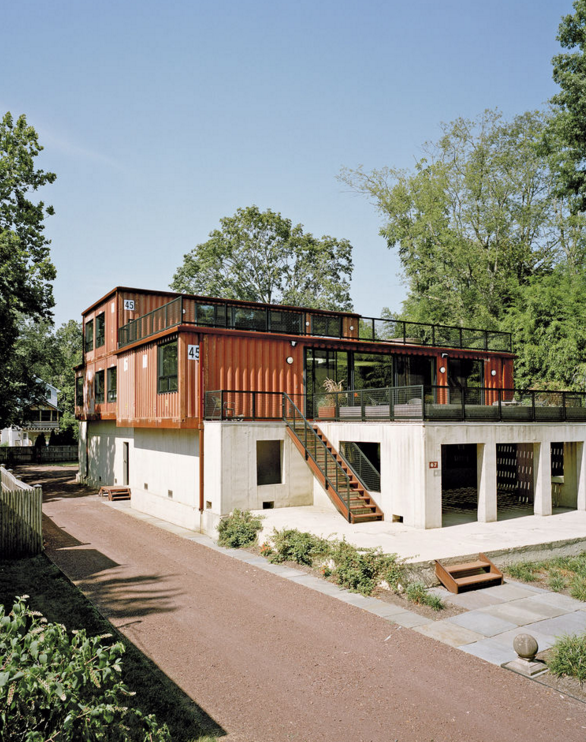 There’s a three-level, 7,200-square-foot residence made from 11 shipping containers in Yardley, Pennsylvania. The home belongs to and was designed mostly by Bill Mathesius––a state superior court judge and also a county executive of Mercer County in New Jersey––and his significant other Martha Moseley. Moseley recently spoke with Dwell.com, offering a little insight into how the project came together and detailing some of the home's main features, which include an on-demand water heater, radiant heat, central air, and multiple decks.

The couple, who had sold their individual properties, were looking for a new home and had only three requirements: It needed to have a view; it needed to be in Pennsylvania; and it needed to be close to Trenton, New Jersey (where Mathesius works). After a bit of research, they stumbled upon a lot featuring an already installed concrete foundation. That foundation, along with an article that Moseley had read about shipping container homes, became the foundation for the two to build their new residence.

Each container, which now feature interiors mostly lined with Sheetrock, is about 45 feet. This became extremely convenient for the couple, since the pre-existing concrete foundation ended up being around to 45 feet wide.

According to Mosley, the inspiration behind positioning of the kitchen island was “to bridge the different units, take the focus away from the elongated container beams, and balance the overall structure.” Her and Mathesius wanted the home to have a free-flowing, open feel––one that would be reminiscent to that of a loft apartment.

The north-facing side of the home doesn’t have many window treatments. This is due to the abundance of bamboo that has been planted that acts as both a natural curtain and canopy. The windows that are featured in the house are large and custom-made.

The guest room is the exact width of a single container. The couple has coined the room the “sleeping nook” and use it for when their children are staying over. There aren’t many doors found throughout this unique home, but a few of the doors that this container home does possess are located in the sleeping nook, which also happens to be “the only extra room with any privacy,” Mosley says. The nook’s white bas-relief doors, were designed by Mathesius, who also is responsible for much of the artwork in the house, including various sculptures, paintings, and photographs. The crafty guy also made the fire pit and the patios’ planter boxes.

Due to local zoning laws as well as being located in a floodplain, those who reside in the area aren’t allowed to have anything outside of a storage or garage space downstairs. “So we keep all of our systems in a side room next to the guest room, and it’s all very, very compact,” Mosley says.

While she notes that people have been “fascinated” with her and Mathesius‘ interesting abode, she admits that the architecture is “not for everyone.”