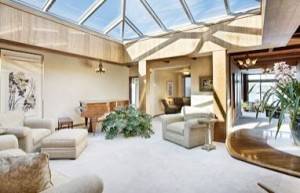 A retractable skylight in the main living room is perfect for gazing.

Jack Dorsey, one of the powerhouses behind Twitter and Square, has purchased a breathtaking cliffside home over looking the Pacific Ocean in San Francisco.

The home located in the Seacliff section of San Francisco was originally listed back in 2008 for more than $18 million dollars. Since then, the price has come down to a far more attractive $9.9 million, the price Dorsey snagged it for.

The cantilevered two-bedroom, two-and-a-half-bath home comes in at roughly 3,700 feet ad features fully modernized kitchens and bathrooms. The home was built in 1965.

The home's most fascinating feature is a retractable skylight that can be opened to expose the living room to the outdoors. Inside the home there's also a rock fireplace wall, redwood accents and floor-to-ceiling windows in the master bedroom offering a spectacular view of San Francisco Bay.

There is also a spiral staircase leading to a rooftop terrace for an even better view of the Bay area.

Jack Dorsey is estimated to be worth over $750 million.