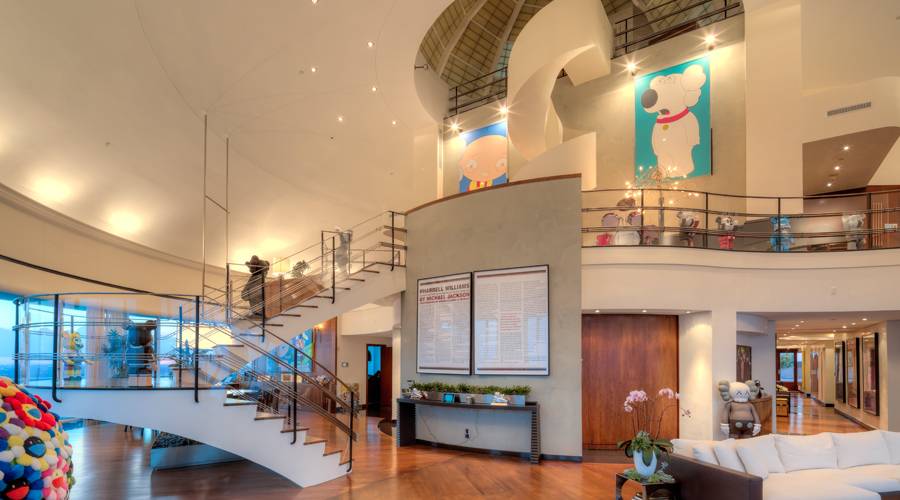 TopTenRealEstateDeals.com offers fresh real estate news for luxury and celebrity listings across the United States. Check out a taste of their Top Ten list:

The Brickell Avenue penthouse Pharrell just put on the market is a testament to his talent in design.  Located 40 stories above Biscayne Bay atop Bristol Tower, the 10,000-square-foot penthouse has five bedrooms, seven bathrooms and an additional 5,000 square feet of terraces with its own rooftop swimming pool and a second level summer kitchen.   He purchased the condo in 2007 for $12.525 million, then transformed it into a mogul palace with his art and furniture collection.  Views take in bay, ocean and Key Biscayne.  The terrace is the perfect place to put your feet up with a cocktail and watch the parade of cruise ships Friday evenings as they head past Key Biscayne to their island ports of call. 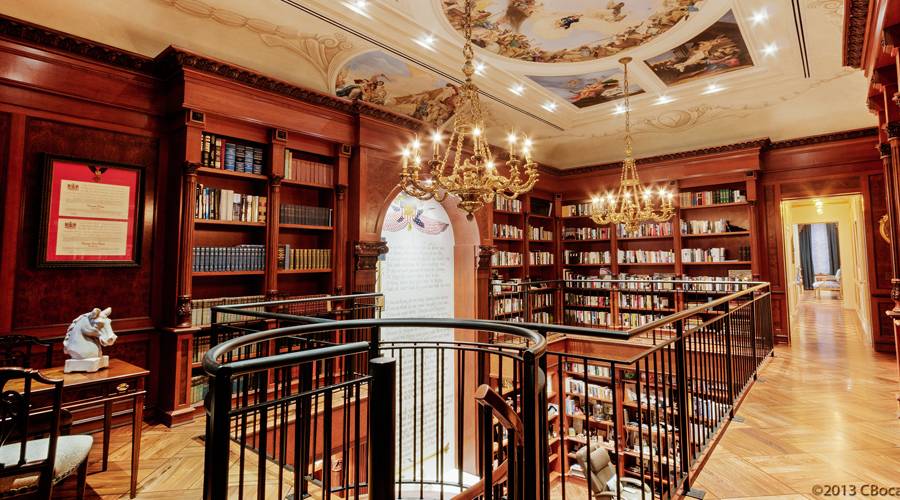 One of the largest homes in New York City, it is double wide at 40 feet and six stories high, covering 20,000 square feet with a fully finished basement. An additional terraced roof deck adds even more usable area at 2,500 square feet.

Vincent Viola’s wife Teresa discovered that this building was for sale in 2005 while at a doctor’s appointment there.  She immediately saw the possibilities and they purchased it for $20 million.  After a total gutting, they imported the best materials from Europe and she and her group of architects and designers set about turning the structure into one of the most elegant homes in the city.  The nineteen room home now consists of seven bedrooms and nine bathrooms, huge walk-in closets – one that doubles as a safe room – and huge windows with views of Central Park.  It also has a two-story library, a huge kitchen with appliances that come in doubles, a pizza oven and two kitchenettes off the main rooms used for entertaining.  The basement level contains a stunning two story movie theatre with balcony, wet bar, gym and game room.  A saltwater swimming pool, steam room and spa are on a separate floor.  All floors are accessed by an onyx lined elevator. 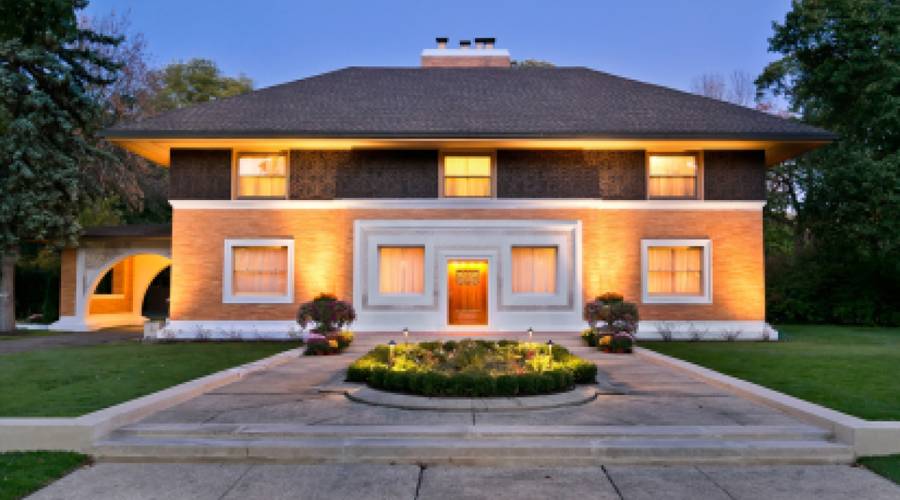 Frank Lloyd Wright had interesting character traits aside from being a visionary designer.  He was resourceful and was a risk taker.  When he built his own house and studio in a Chicago neighborhood, he found it necessary to borrow money from his employer, architect Louis Sullivan.  In order to pay it back promptly he had to come up with additional income.  Of course selling his architectural services would make the most money, but there was the issue of that pesky little clause in his contract with Adler and Sullivan that said independent work outside the company was forbidden.  But Wright decided to take the chance.  He managed to build eight of these “bootleg houses” before being caught and fired.

The Winslow House was the first house he designed after his firing.  He designed it in 1893 at the age of 26.  It was Wright’s first complete break from the traditional houses of the time and it was said that the owner, William Winslow, would take a different train to work instead of his usual one so that he could avoid the comments from his neighbors about the house’s radical design.

According to the Frank Lloyd Wright Building Conservancy, the 5,036-square-foot home also includes a library, enclosed sun porch, four generously-sized bedrooms, a second-floor family room with fireplace, and 3.5 baths. In addition, there is a 550-square-foot bonus room with fireplace on the third floor (formerly maid’s quarters) which could easily be converted into a children’s play area or media room.  Its unique features and craftsmanship represents Wright’s first attempt at the Prairie Style.  All original elements of the house have been meticulously maintained except for the kitchen which has been replaced to meet today’s expectations.

Frank Lloyd Wright’s Winslow House in River Forest near Chicago is now for sale for the first time in 55 years.  Priced at  $2.4 million. 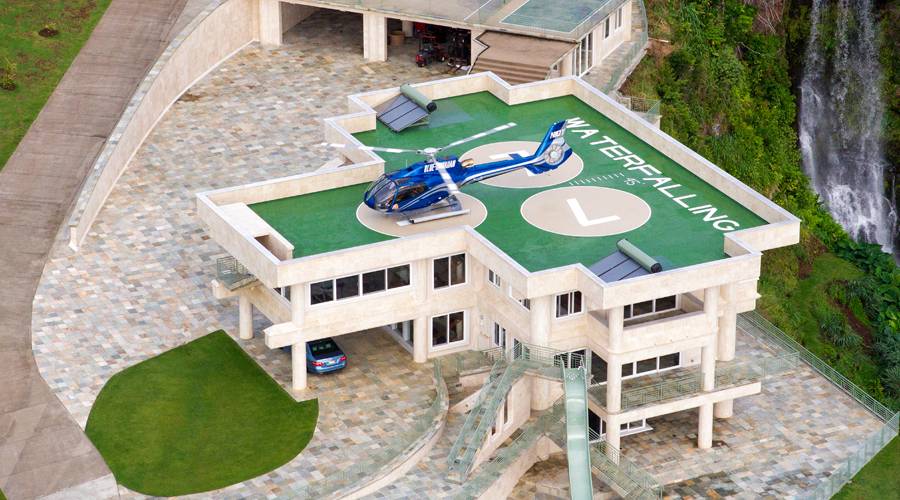 For those looking for their exclusive home next to a rainforest with their own crashing waterfall beside the house, it can be found here on the edge of a cliff overlooking the waterfall and ocean.  This world-class residence with rooftop helipad, olympic-sized swimming and diving pool, private golf course, and a tennis and basketball stadium has two elevators to access all three floors. Located a few miles north of Hilo on eight acres overlooking where the jungle meets the ocean, the home has five bedrooms, ten bathrooms and two third-floor master suites with lanai. The main living area, including chef’s kitchen and dining all have spectacular waterfall and ocean views. On the aquatic level are two guest suites, a game room, media area, two whirlpools, sauna, shower, outdoor kitchen and dining area. There is a one-bedroom guest house and four-car garage plus an additional 1.36 acre parcel that goes with the property. Thrill your guests with a helicopter tour of the volcanos. How many hosts can top that? 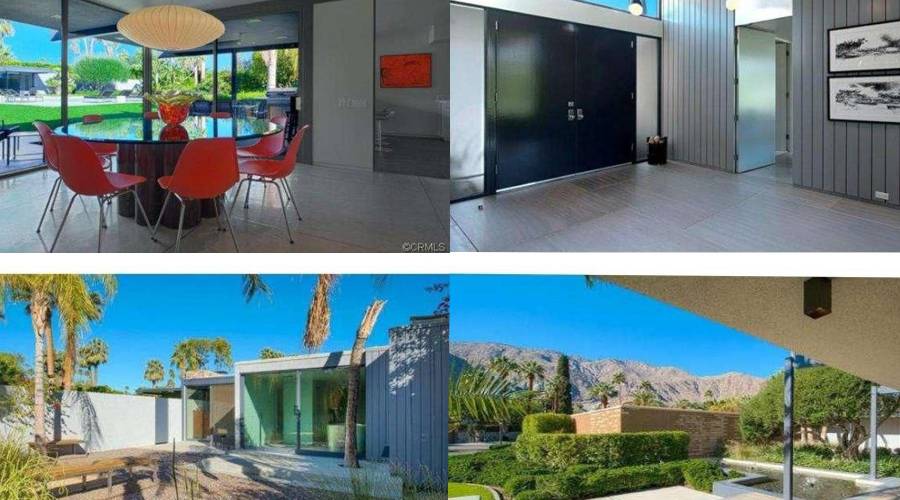 When we hear Dinah Shore’s name, an old ad jingle always seems to come to mind.  “See the USA in your Chevrolet, America is Asking You to Come. . .”  Dinah’s 1950/60’s Chevy jingle and her 44 million TV viewers most likely paid for the home that DiCaprio can now call his own.  Leonardo just bought the stylish Palm Springs home that was designed by Palm Springs architect, Donald Wexler, and built for Dinah in 1964.

The home is timeless desert architecture with clean lines and glass walls opening out to the private walled grounds.  The sellers had undertaken extensive renovations, bringing in modern upgrades while respecting the fine bones of the design.  Inside the enclosed, gated 1.34 acre compound are the 7,000-square-foot main house with six bedrooms and eight baths, pool, spa and guest house.  There is also a tennis court with glass pavilion.

DiCaprio recently sold his Malibu beach house for $17 million and also finished his latest film, “The Wolf of Wall Street” last year.  His new Palm Springs vacation home will be a fine place to unwind until his next film.  Of course if he gets bored with Palm Springs he can always try out one of his New York homes, his other Malibu home or his main home in Los Angeles for a change of scene. 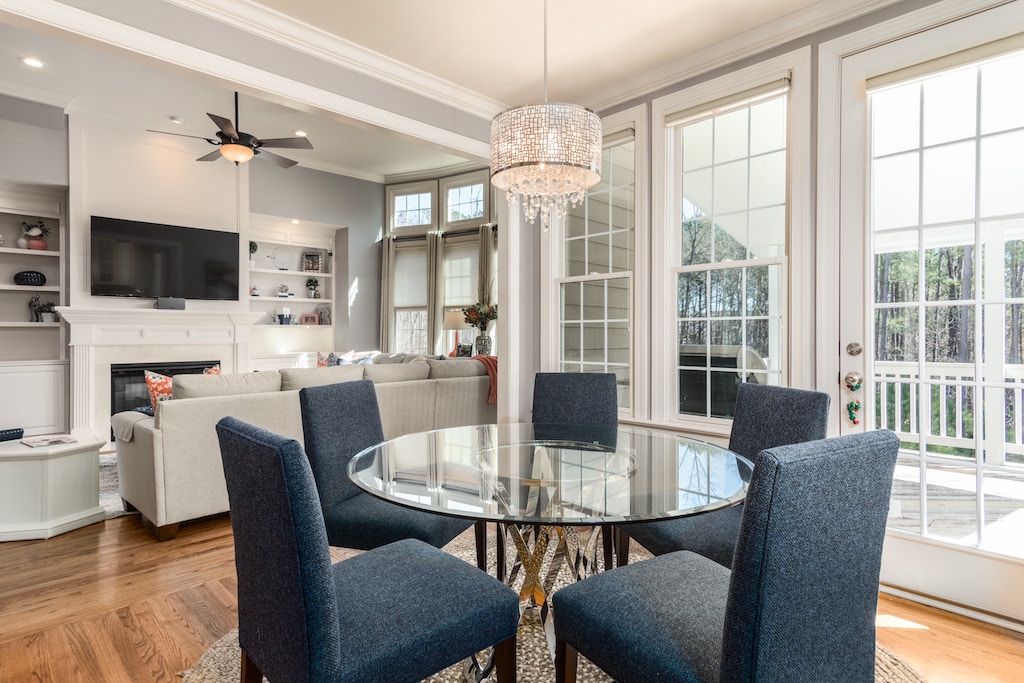 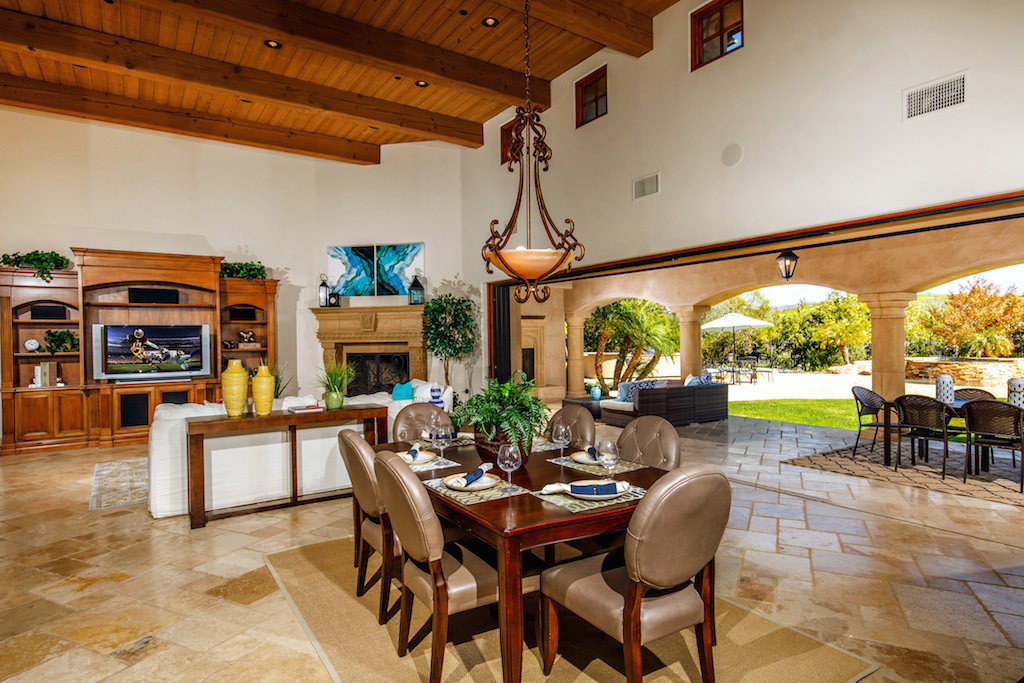 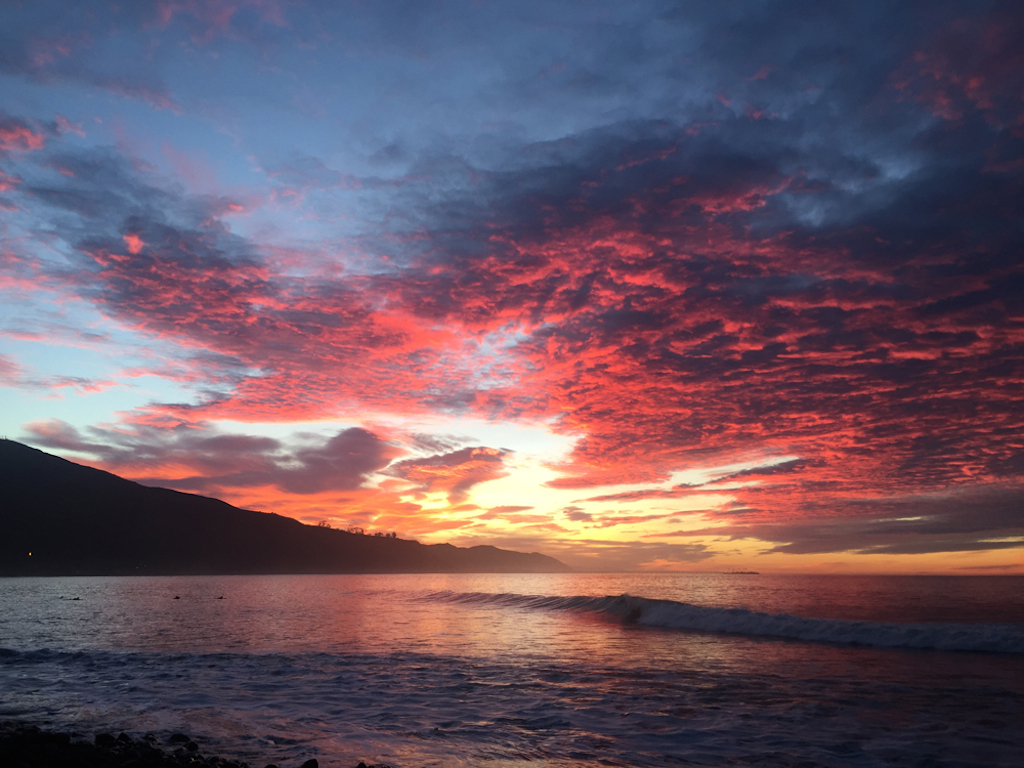 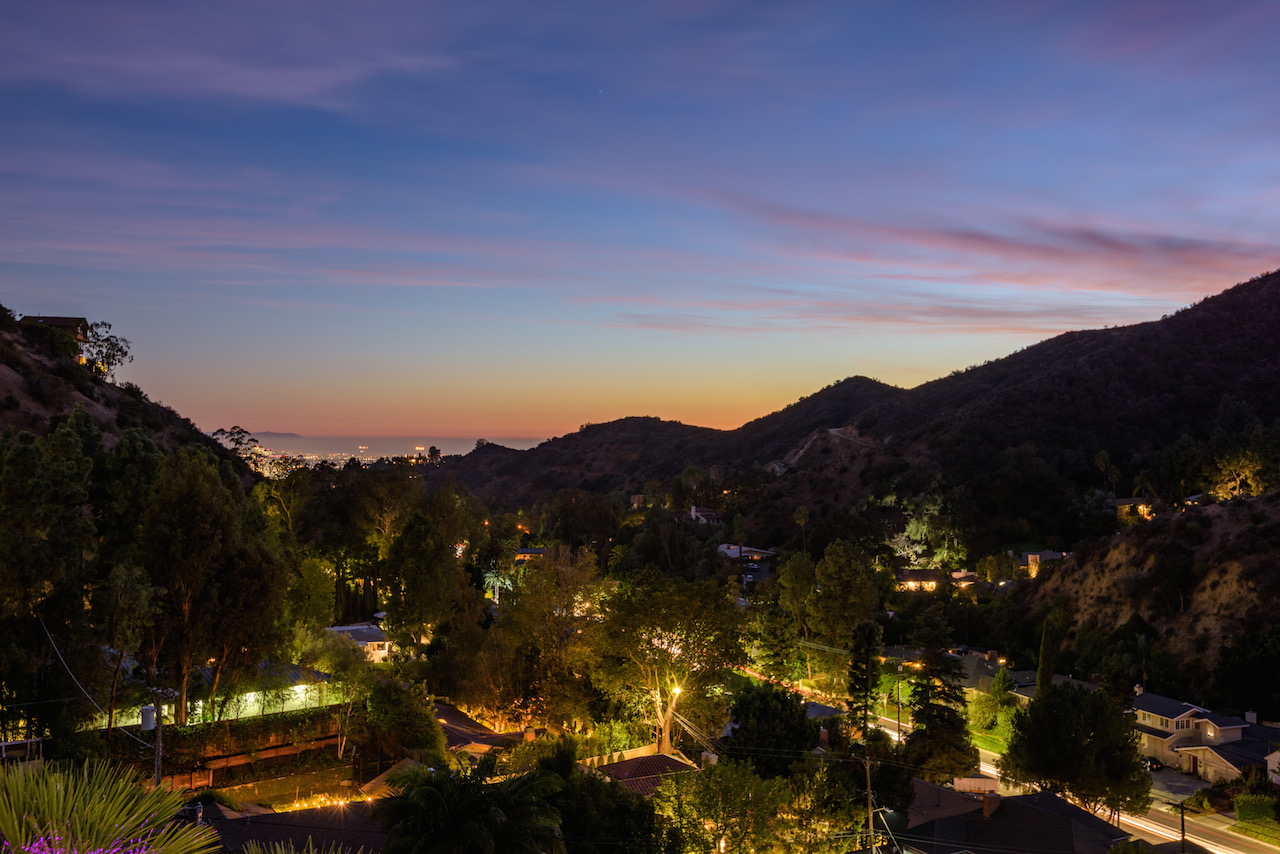 Ernie Carswell On What Makes Sunset Strip So Haute

May 09, 2019 / Comments Off on Ernie Carswell On What Makes Sunset Strip So Haute