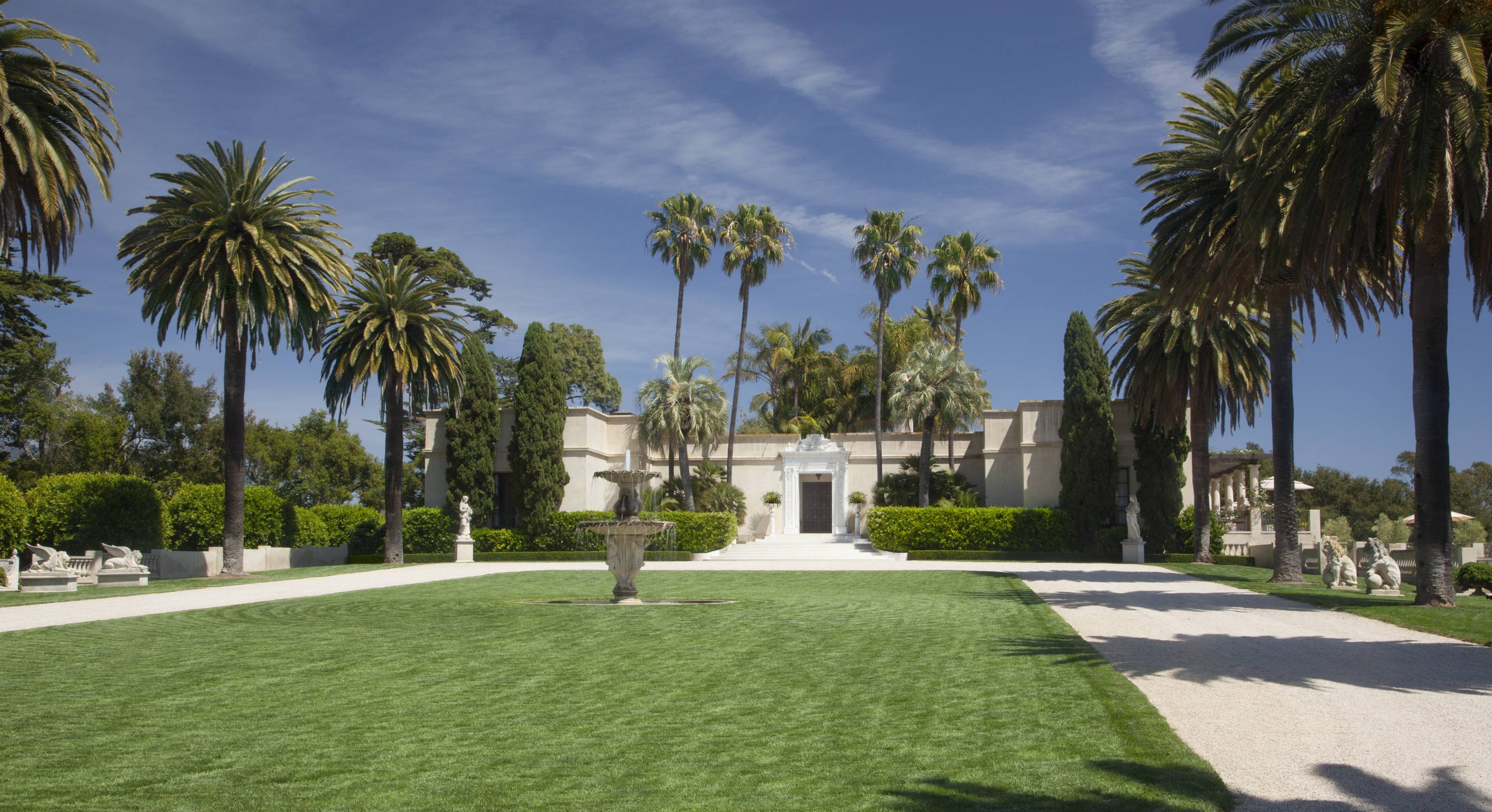 Frederick Forrest Peabody was a senior executive of Cluett Peabody and Company in Albany, New York that produced the popular early 20th Century Arrow men’s shirts, collars and cuffs.  It was Peabody’s marketing skills that created the famous Arrow Man image, an ad campaign that pushed shirt sales to over four million every week by the 1920s.

Determined to find the best hilltop land for views to build his home, Peabody set about his search on horseback.  He settled on what is known as Eucalyptus Hill with 350-degree views of the Montecito Valley Mountains, Pacific Ocean, Santa Barbara Harbor and south to the Channel Islands.  Though still living in New York, Peabody hired a landscape architect to bring in trees, which included citrus, palms and eucalyptus.  He first built a house on the property for his newly divorced daughter and had a popular local architect, Francis Underhill; draw the plans for his own home. Construction began in 1913 and was completed in 1915.  Designed in classical Mediterranean style, Peabody named the estate Solana, the Spanish word for “sunny place.”  When they were finally able to move into the home in 1917, the family held many galas and fundraisers there and were major contributors to the development of the city. 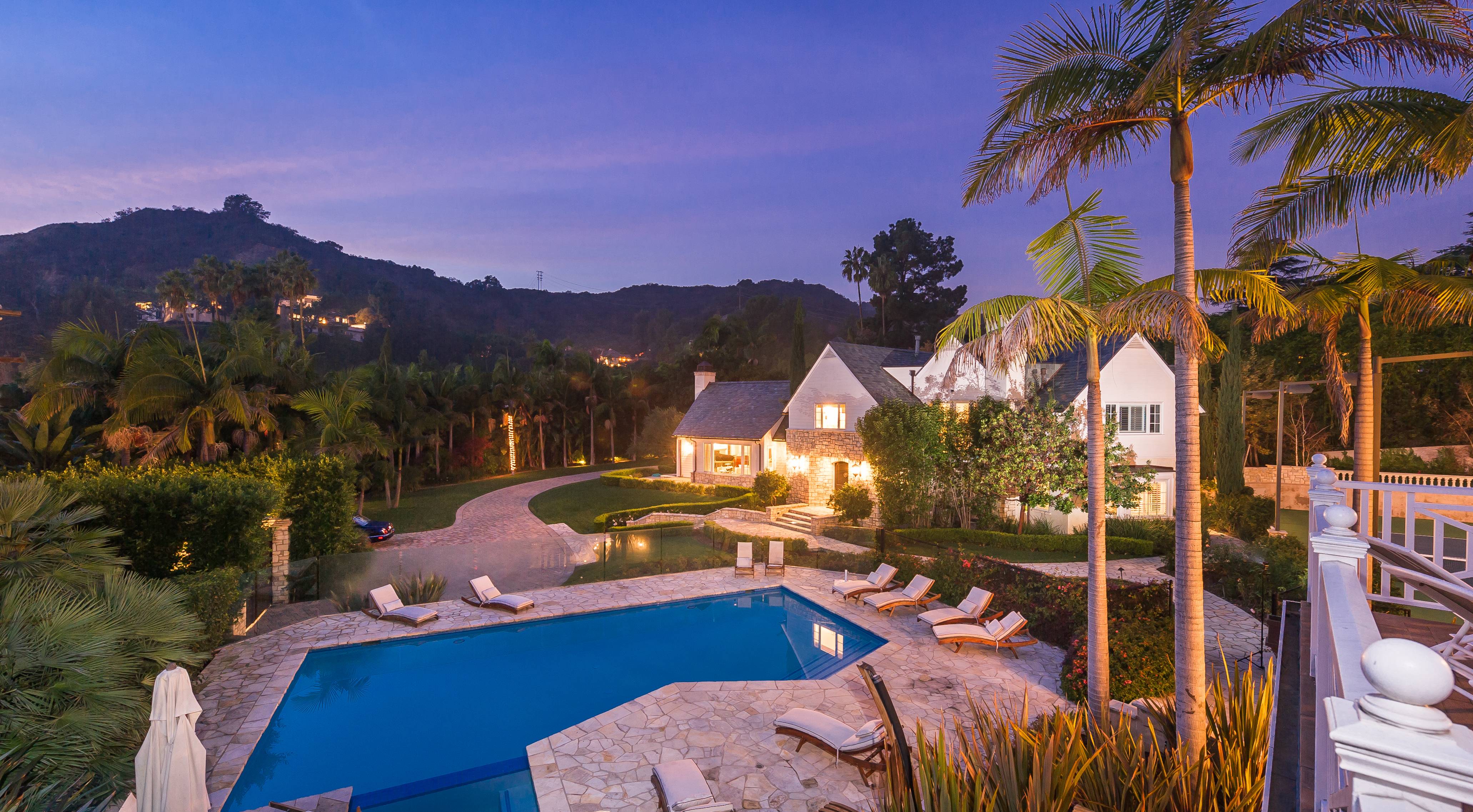 Beverly Hills is filled with star-studded homes, but it is still the early Hollywood era that draws us.  It was a far more glamorous time in 1941 when the Big Band era was in full swing and the Harry James Orchestra (the first band to hire Frank Sinatra) was the most popular band in the country.  This was also the year that a New England-style house was being built in Beverly Hills for actor Bert Lahr, the Cowardly Lion in the “Wizard of Oz,” where James and his movie star wife Betty Grable would eventually live.  Paul McCartney, Beatles star and Sergeant Pepper's Lonely Hearts Club Band creator, also lived here in the 1990s.

Today, this estate of the stars over 1.3 acres with gated entrance, packs a powerhouse of pleasure and entertainment.  Enclosed in privacy, the estate consists of the main house, full sized guesthouse, pool and tennis court, all with lushly landscaped grounds. The main house has seven bedrooms, ten bathrooms, media room with wet bar and a wine cellar with an attached three-car garage. The guesthouse has a separate street entrance with two bedrooms and three baths and an attached two-car garage. The property has many outdoor terraces, an outdoor kitchen, and a new structure that houses a two-lane vintage-style bowling alley, game room, wet bar and powder room. It’s the perfect retreat for those who left their heart in the Hamptons or in Paul’s case, England. It was decorated by Ralph Lauren to emulate a Connecticut-Hamptons estate that brings out all the best architectural features such as wood beams, dark stained hardwood flooring and massive openings in the fireplaces. The Hollywood home of trumpeter and bandleader Harry James and other notable stars is on the market. Listed for sale at $25.58M. 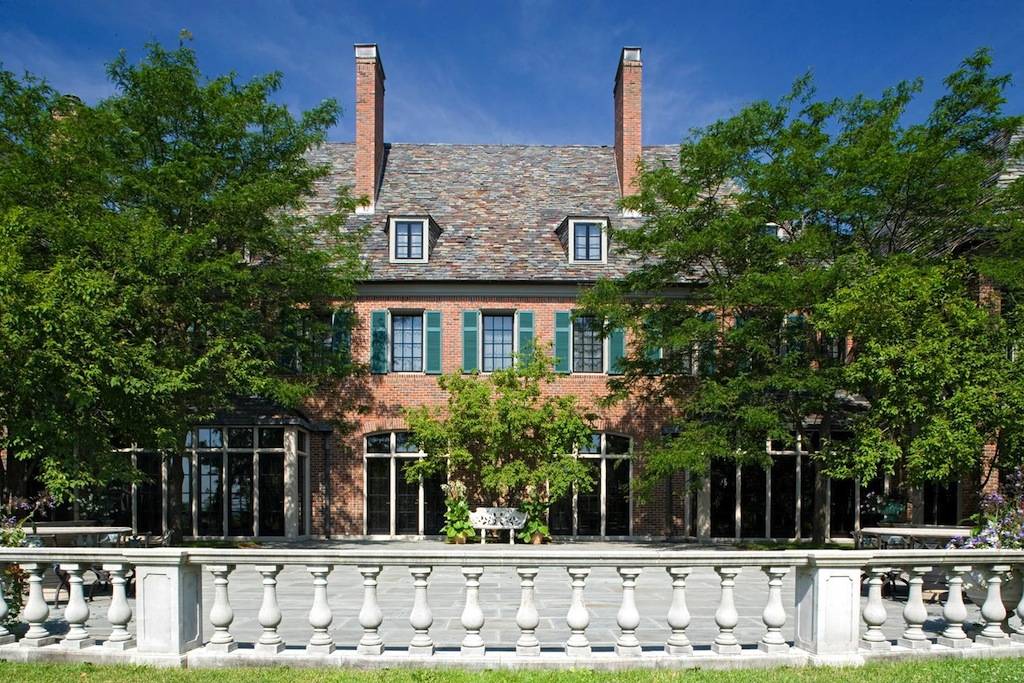 C.A. Pillsbury and Company was founded in 1872 by Charles Pillsbury and his uncle, John Pillsbury. John Pillsbury’s son, John S. Pillsbury, built the Southways estate on Brackens Point in Minnetonka, Minnesota in 1918 with his wife Eleanor as a summer retreat. It wasn’t until 1991 when Eleanor died at age 104 that the estate was sold for the first time.  For years after it was built, it was used as a summer house as were many of Lake Minnetonka’s large estates.  However, in 1930, it became a permanent residence for the Pillsburys. The 13-acre estate includes seven structures including the main house, a caretaker’s cottage-greenhouse, garage, pool complex, smoke room and tea house. The 32,461 square foot main house has nine bedrooms, 16 bathrooms, formal rooms, hearth room, sunroom, library, family room, conservatory, game/billiard room, gym, playroom and large wine cellar. 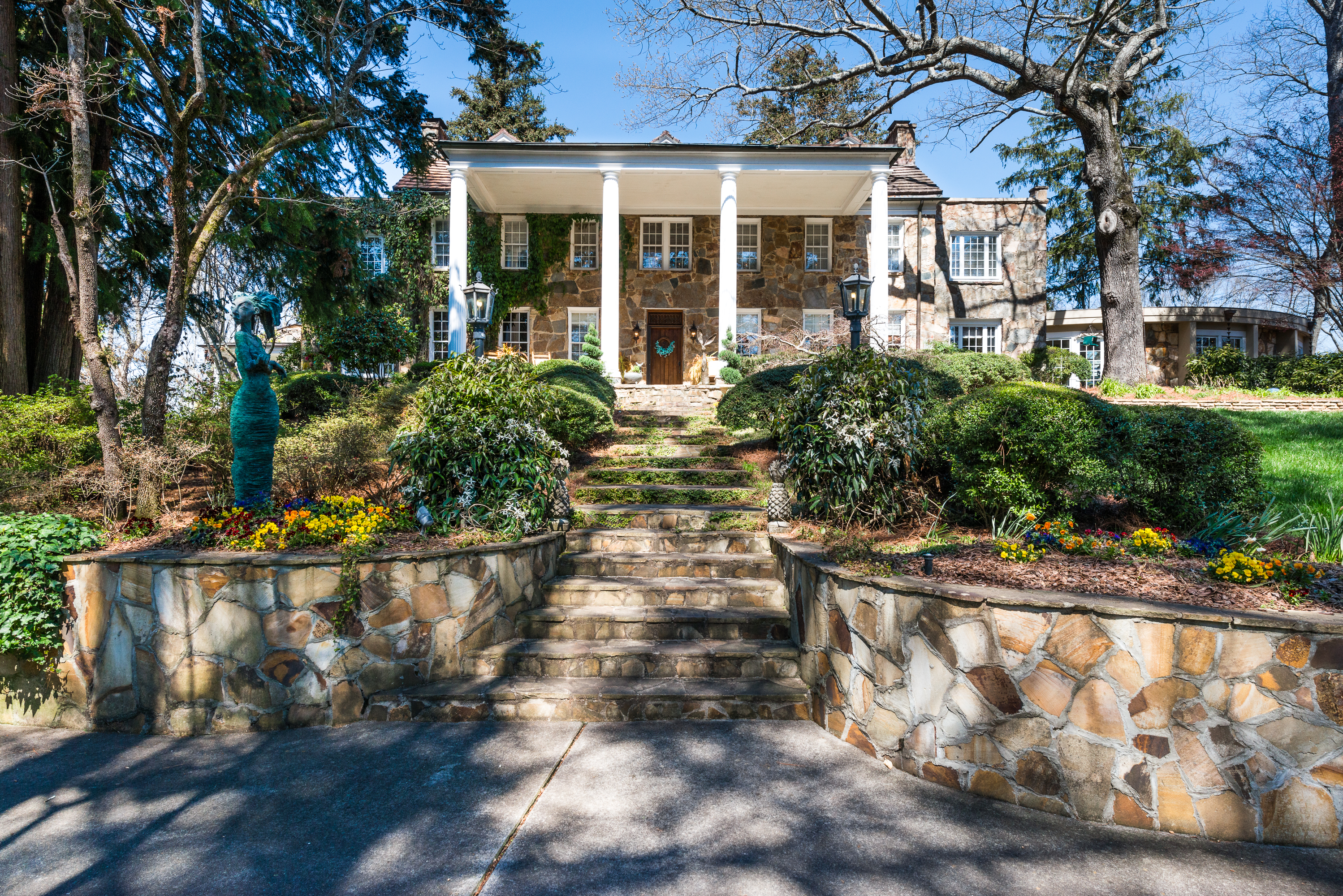 In the afternoon of July 8th, 1864, Major General Jacob Cox’s Division of the 23rd Army Corp of the Ohio, crossed the Chattahoochee River to begin the Battle of Atlanta, a preview skirmish on General William Sherman’s March to the Sea.   Years later in 1929, Atlanta native Dr. Daniel H. Griffin began construction of a stone house on 170 acres on a ridge above this historical Civil War river crossing.  Griffin went on to open the first pharmacy, the first post office and the first medical clinic in the north Atlanta area.  When Griffin’s wife died in 1973, the neglected home was purchased by Mr. Bob Shipman.  He did much to save the house for the current owners by rewiring and replumbing the home and building the guest house.  The Jean-Paul Richard family purchased the home from Shipman and have spent seven years restoring and expanding the home and turning the gardens into a work of art. 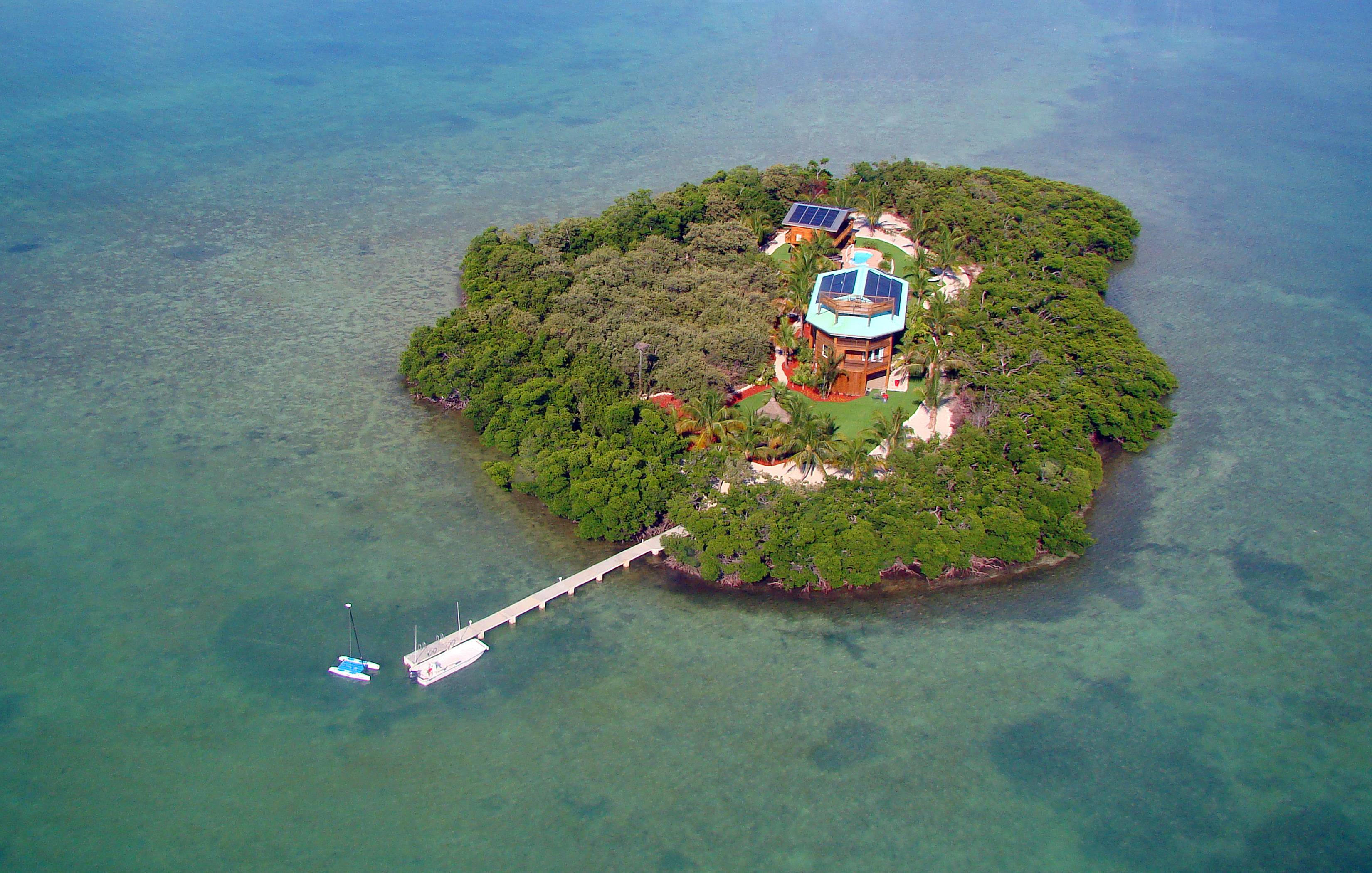 The island, which can be reached only by boat and was formerly owned by Nick Hexum, lead singer of the rock band 311, is completely self-sufficient.  Powered by solar with a state-of-the-art solar inverter and on-demand muted generator, there is also a desalination system for fresh water.  In addition to the island, included is a waterfront lot with dock on Summerland Key.  Not only can another home be built on this lot, but there is also plenty of room on six-acre Melody Key to expand if desired.