Hollywood has, indeed, recently received a makeover. Gone are the cigars, bourbon and bad-ass behavior; replaced by glossy nude lips, green juice and motherhood. The new Rat Pack consists of Hollywood’s hot female homemakers who bring home the bacon, fry it up in a pan and make dinner into the most dreamy, dazzling dining experience imaginable. This year’s Ocean’s 8 cast definitely knows how to kick some real estate rump.

Sandy remains America’s sweetheart. And her Georgian roots bring a cozy, warm vibe to her $23-million, Los Angeles mansion. It’s a two-story home built in 1940 that sits on acres of luscious green grass. Her mansion is traditional in style and resembles an Old English stately home rather than a typical LA residence. 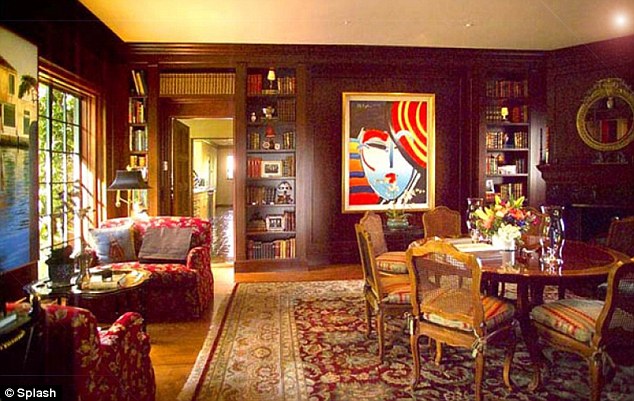 The interior of the house is also very traditional in style and includes a library with classic wood-paneled walls, dark wood floors and built-in bookcase. One of Sandy’s pastimes is the restoring and preserving of historic real estate and so, it’s probably safe to presume that Sandy has extensively renovated her mansion but preserved the integrity of this classic library by restoring its original grandeur.

There are also a screening room, fully-equipped gym, seven bedrooms and eight bathrooms, including a huge master suite with bay windows and a five-star bathroom with jacuzzi tub. 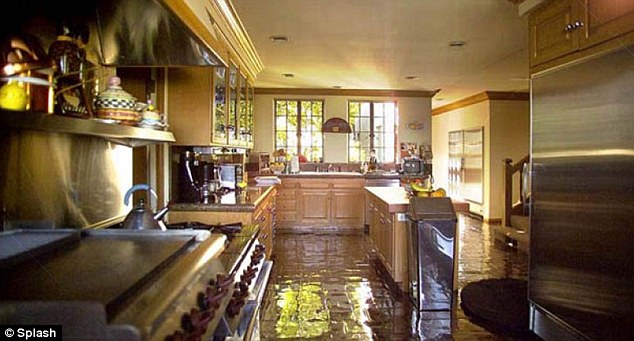 This ultra-deluxe mansion also came with an expansive chef’s kitchen, stainless steel appliances and a breakfast bar with doors that lead outside to a dining patio. This killer kitchen calls for crispy, fried Southern chicken to be cooked and shared amongst Sandy, her two children and handsome beau.

The award-winning actress and her husband live in a historic, $6.25-million English manor (dubbed the Highwell House) that is located in the picturesque English countryside. It was originally built in 1890, and has been extensively renovated and restored to its original, authentic charm with bespoke finishes. 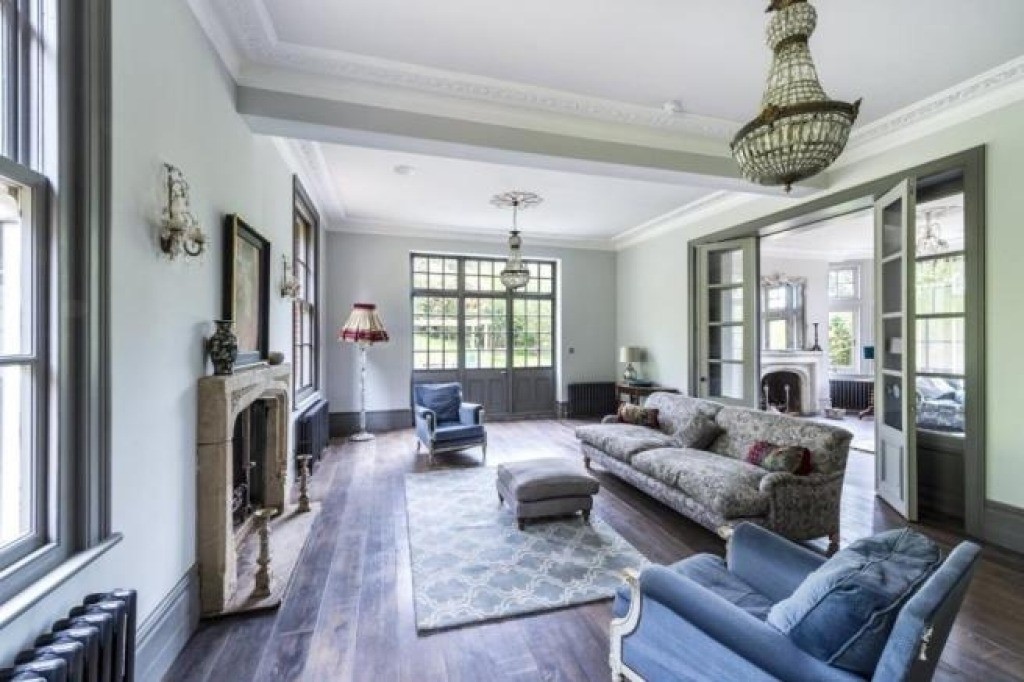 Blanchett’s home includes a 19th-century French chandelier that hangs in the reception hall, a large oak staircase that leads up to the second level, large bay windows and European stone kitchen sink, countertops and tiling. Could it get any more English than is? 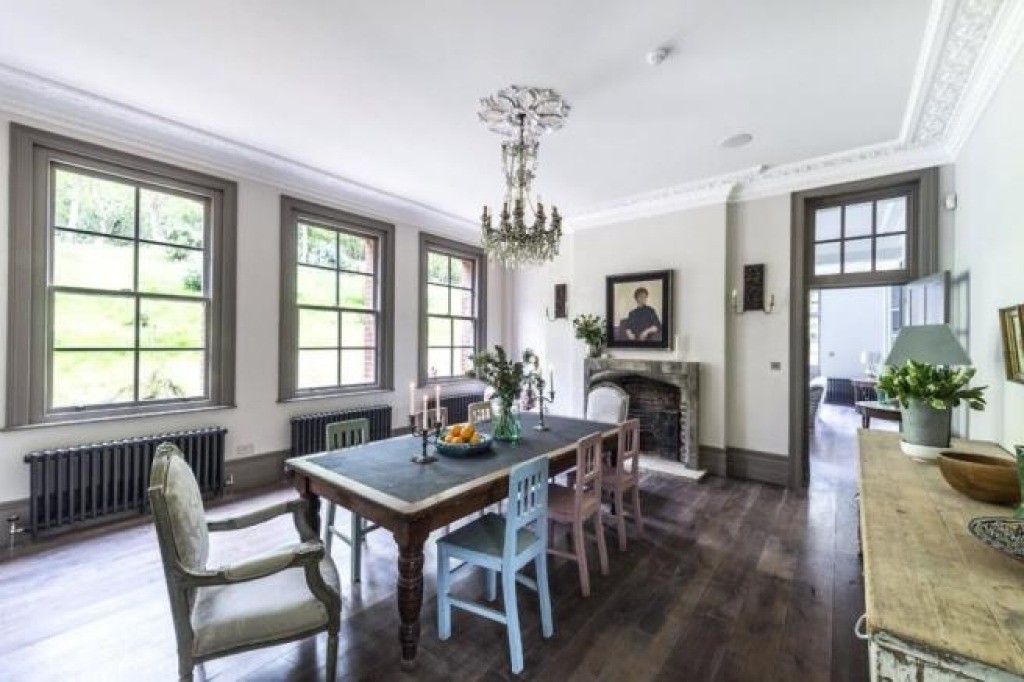 Perhaps, it does. This English manor has seven bedrooms, seven bathrooms and five reception rooms.

You now know that Ms. Blanchett and Ms. Bullock have more than their Oscars in common: they both are Hollywood royalty who reside in stately homes that boast English grandeur that have been renovated to suit their classic styles. Jane Austen would surely approve.

Anne and her husband purchased an old Colonial-style house in Westport, Connecticut. This Yankee estate was built in the 1920s. 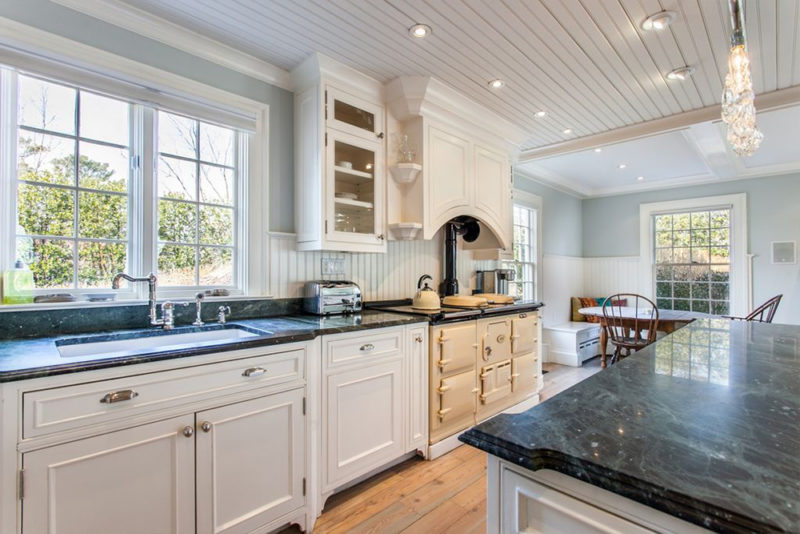 This home has been dubbed CompoBello and includes a traditional dining room with a stone fireplace and vaulted ceiling, two kitchens that boast English cottage windows and pale, pine wood flooring throughout the classic home. 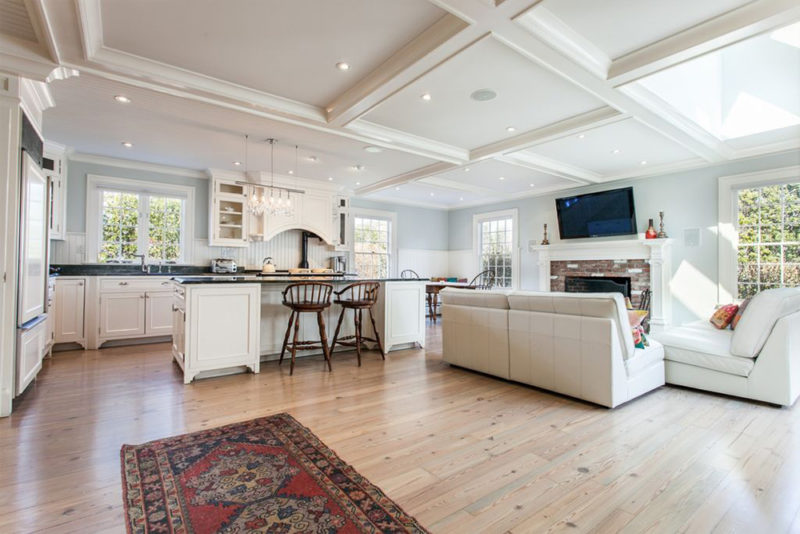 The designs for all three of these Ocean’s 8, A-listers’ homes clearly celebrate the traditional, classic 19th/20th century styles. Tea time has never been so luxurious.

Mindy’s happy, bright home is analogous to a painting that uses color to accentuate where tradition and modernity exquisitely cross paths. 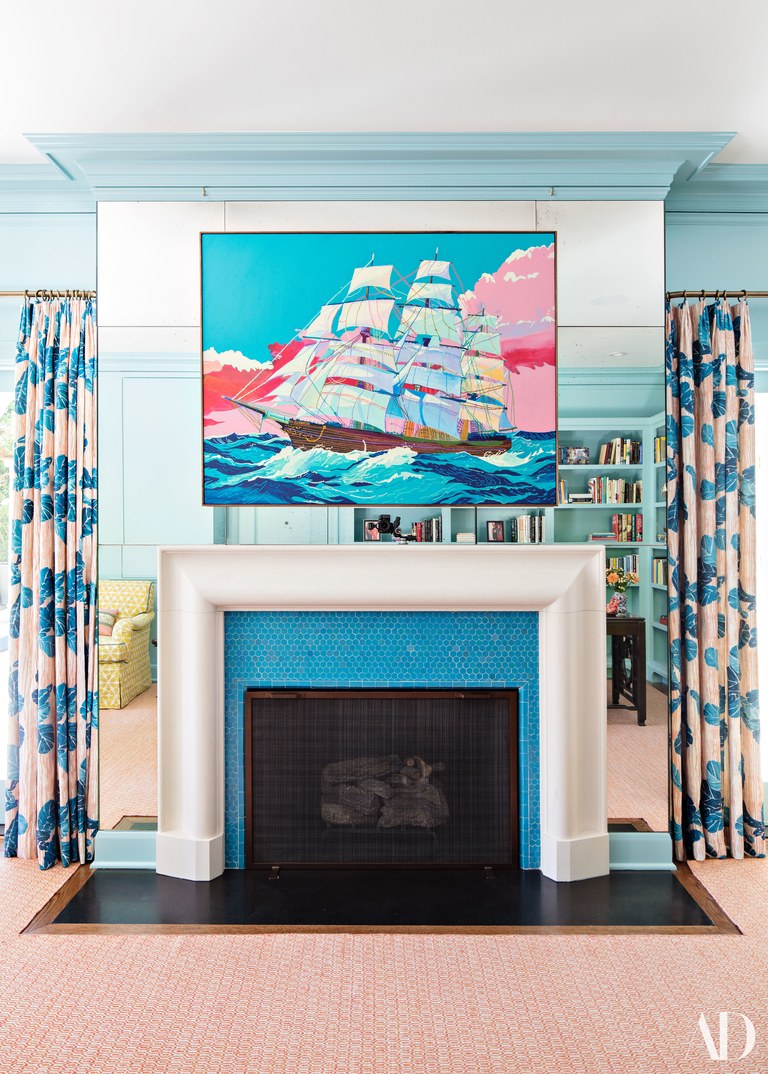 Contemporary features of Mindy’s home include a mantel framed with mirrors, an open floor plan with a number of seating areas made for entertaining and an overall home interior airbrushed by an array of bright, bold colors: from florescent tangerine, bright banana yellow, fresh fuchsias to intrepid teal. A medley of high-end, artsy home design. 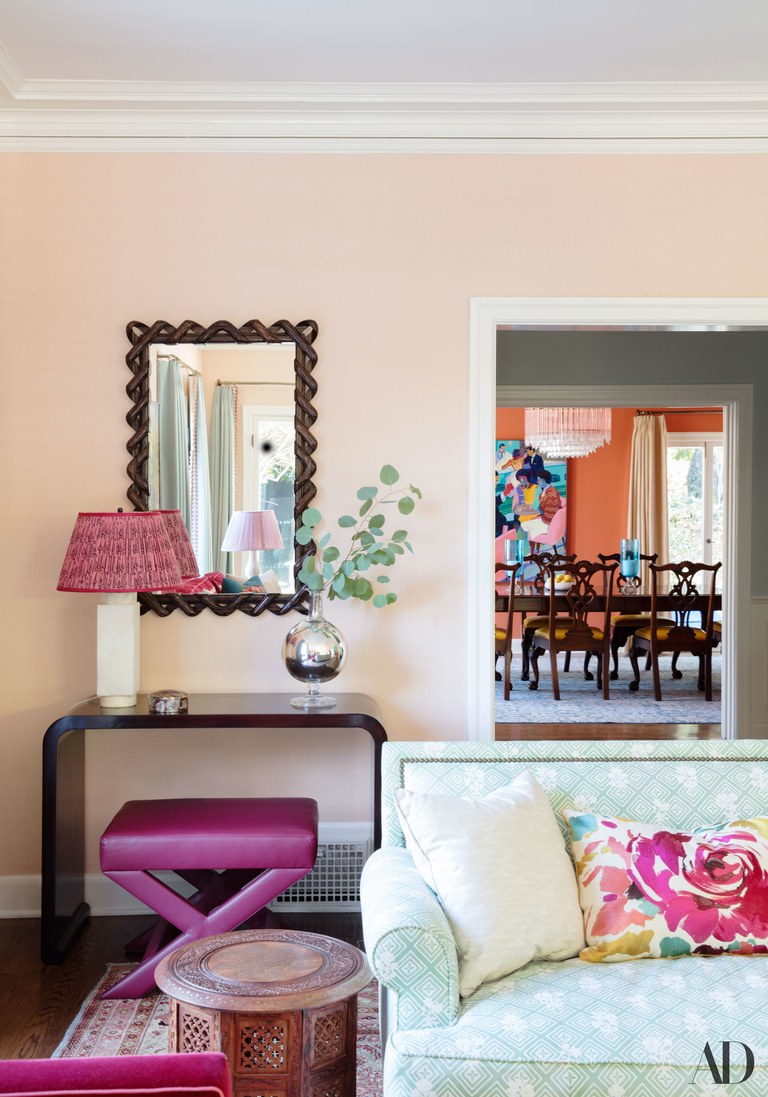 The traditional is also featured in this house of bliss: Mindy’s use of a refurbished table that is one of seven pieces she inherited from her parents; other rosewood furniture refurbished in Swedish fabrics with bright, bold colors; and the use of wallpaper (with pink pineapples, no less). Here in Mindy’s home, the 80s are back in the most high-end, contemporary-colorful elegance made available.

Before and after sum up Sarah’s home.

Sarah purchased her home from the Scream Queen herself, Emma Roberts. Emma sold this single-storey home to Sarah for $2.18 million and that price did not include a pool or any interior color palette. Sarah set about making renovations to this home by first attempting to install a built-in pool and applying The Mindy Project to this home; that is, injecting more color into this monochromatic home. 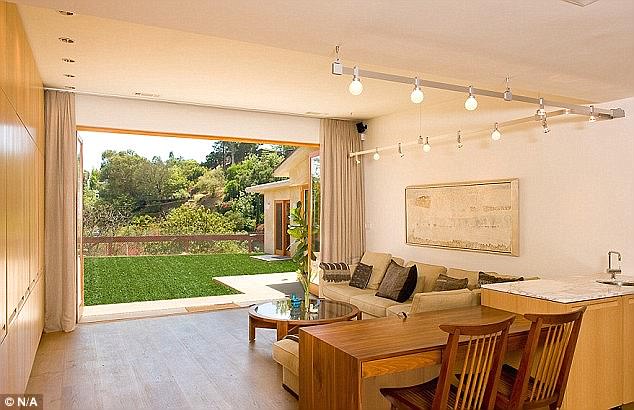 While undergoing renovations for the pool, it was discovered that there was actually a pool already underneath the lawn. 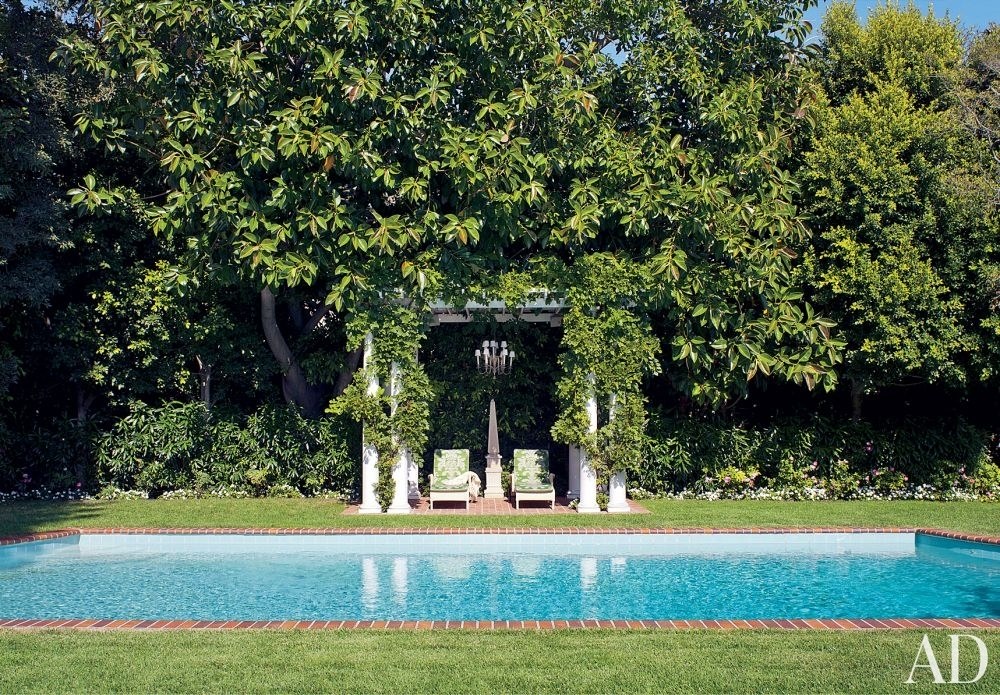 You never know what treasure could be buried so close to home. It could be that unknown, in-ground pool.

Bring in the contemporary cool and bring Rihanna home to the Hollywood Hills for the price of $6.8 million. 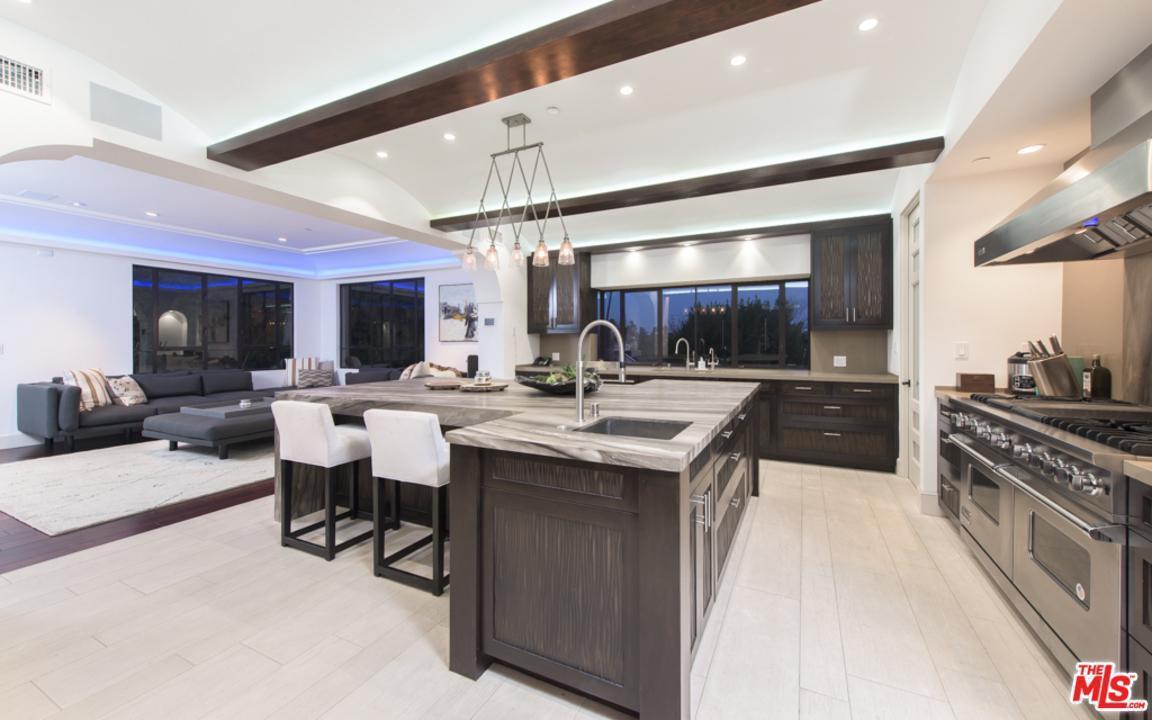 Rihanna’s bachelorette pad is a Mediterranean estate situated on the Sunset Strip with six-bedrooms, 10 bathrooms, movie theater and spa – all resting quietly behind a gated entry that leads to an estate that expands over nearly half an acre of land. 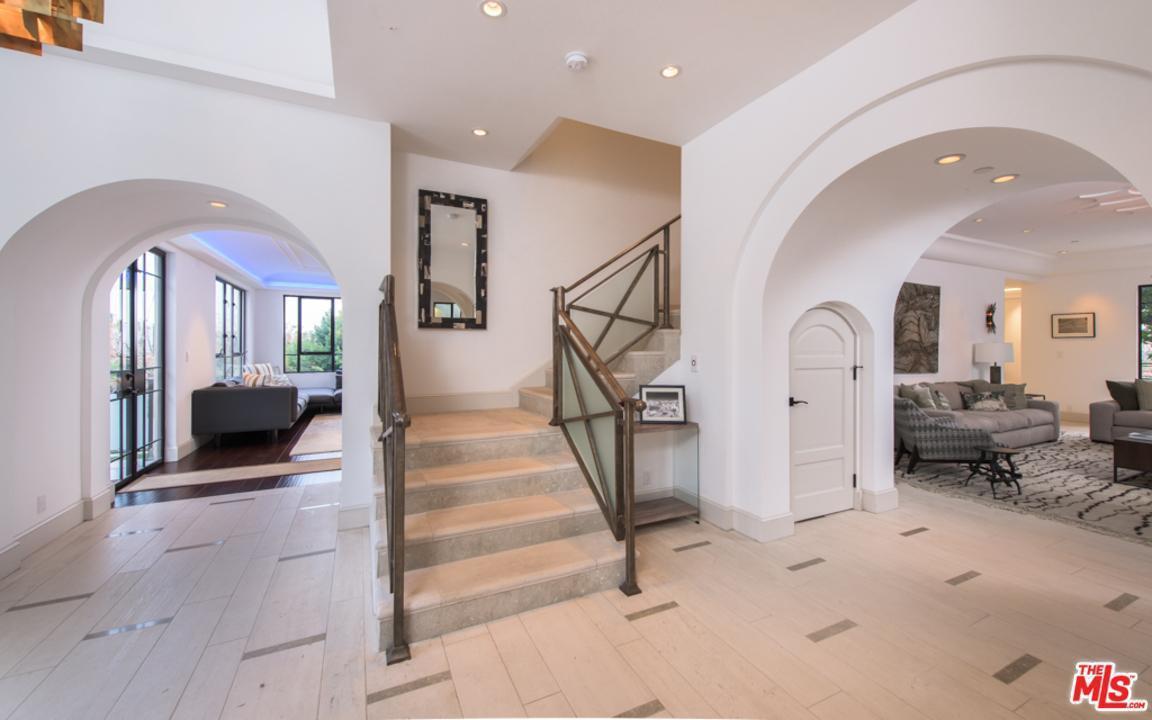 The bedroom is alive below Rihanna’s feet, on sunset and spotting every star it can, on sunset. 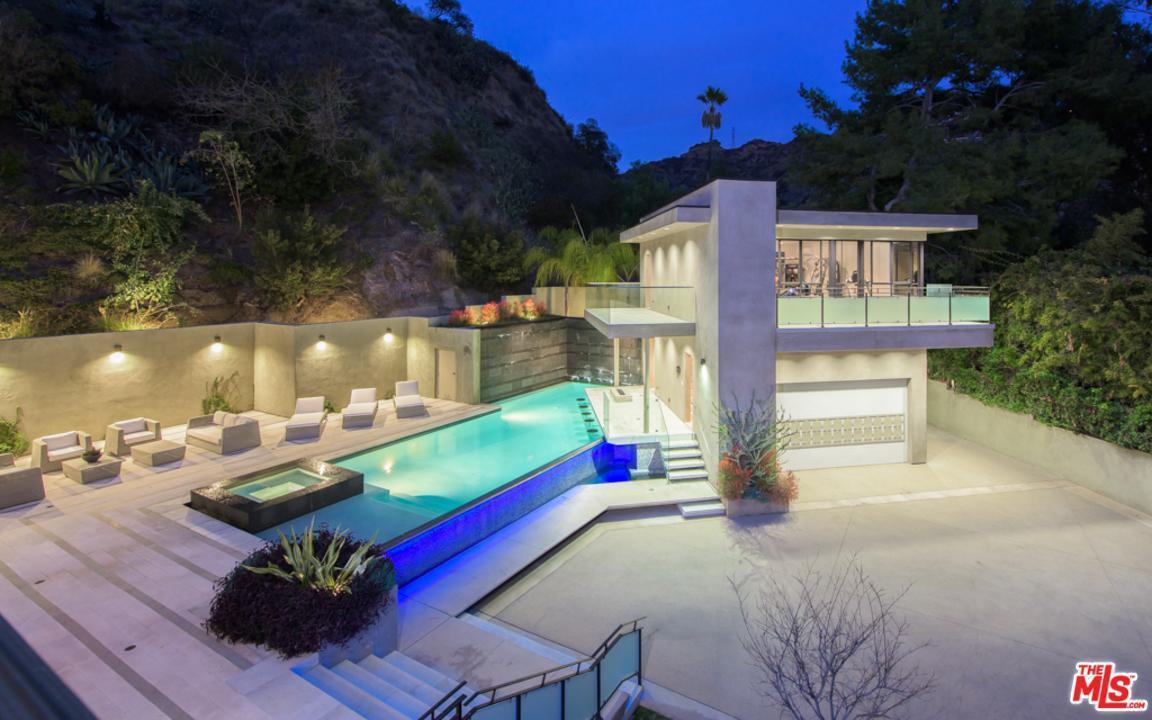 Outside, there’s an infinity pool and multiple lounging areas and views of the Sunset Strip.

No interior photos of Helena’s New London home, but you can imagine.

According to Helena, her  residence is full of eccentricities and is basically a group of artist studios sewn together to make up a bit of Wonderland. Helena’s home is an unintentional tribute to Alice In Wonderland and was inspired by a pair of green frog and dog candlesticks she had purchased in Boston. “It was meant to be, I guess—down the rabbit hole!” Helena said. And you’d have to agree: it’s magical to go down the rabbit hole into the exotic world of luxury that must be experienced first-hand like Alice did.

There are also no interior photos of this Asian rapper’s home. And who cares exactly where Awkwafina lives now in Brooklyn, New York? The question to ask is: where will she be living? She’s so hot right now that her next pad will surely be an ultra-trendy, hipster pad that’s in-your-face, unapologetically Awkwafina.