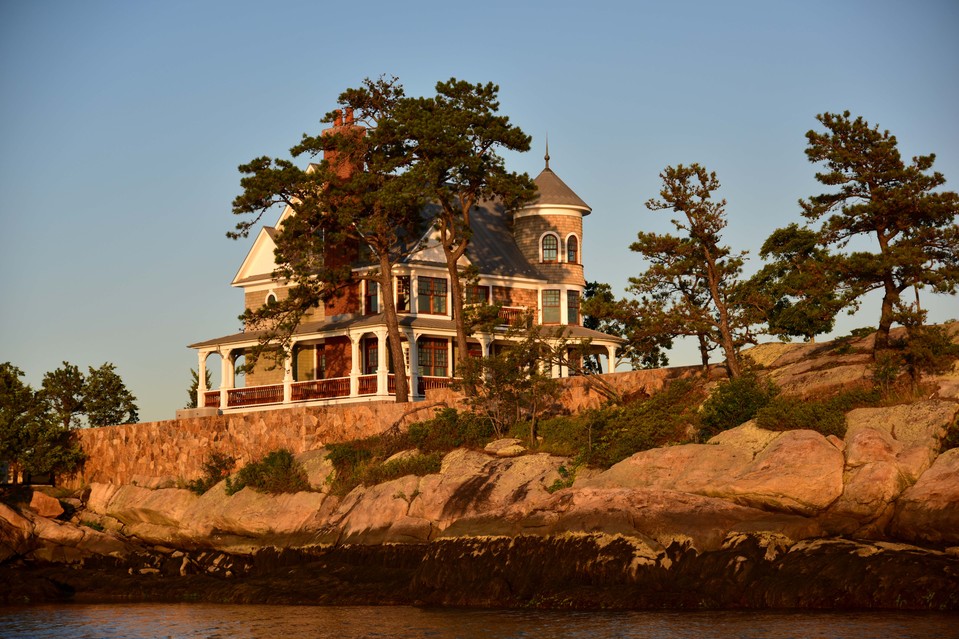 Now’s your chance to own a cluster of tranquil private islands just off the coast of the Connecticut. Part of the Thimble Island archipelago, eight islands in the Long Island Sound have recently been listed for $78 million. According to the Wall Street Journal, the string of islands feature eight luxury residences and include multiple guest houses, outbound buildings, and a number of amazing amenities.

The crown jewel of the sprawling listing is the Rogers Island, an eight-acre island of bedrock that features a picturesque shoreline, towering trees, formal gardens, and rolling lawns. At the top of the island’s highest point, overlooking nearly a mile of coastline, sits a historic and newly restored manor house. The13,000-square-foot, 10-bedroom estate is complemented by a state-of-the-art pool complex, tennis courts, a Nicklaus-designed golf hole, guest houses, and a commercial-scale greenhouse. The island estate also offers a private cove with two granite piers along with floating docks that can accommodate larger yachts.

Other highlights include Wheeler Island, which features an eight-bedroom house. Elsewhere, a pedestrian bridge connects the East and West portions of Cut-in-Two Island, each of which has a house and guesthouse. If all of that wasn’t enough, the listing also includes a 2.32-acre waterfront property on the mainland, which holds several houses and a private dock for boats traveling to and from the eight islands that make up the property.

The luxurious stretch of islands is owned by Christine and Edmund Stoecklein. The couple used the islands to house family and friends during the summer, but have since purchased property in Washington state, where they plan to spend more of their time.