Margaret Thatcher’s former residence at 73 Chester Square, a small residential garden square in London’s Belgravia district, is recognizable for its inlaid “73” plaque in the front doorstep, designed by Baroness Thatcher herself, and also by the steel-lined bombproof door and shatterproof glass. But in many ways, the Grade II-listed townhouse epitomizes the contemporary grandeur of Prime Central London. 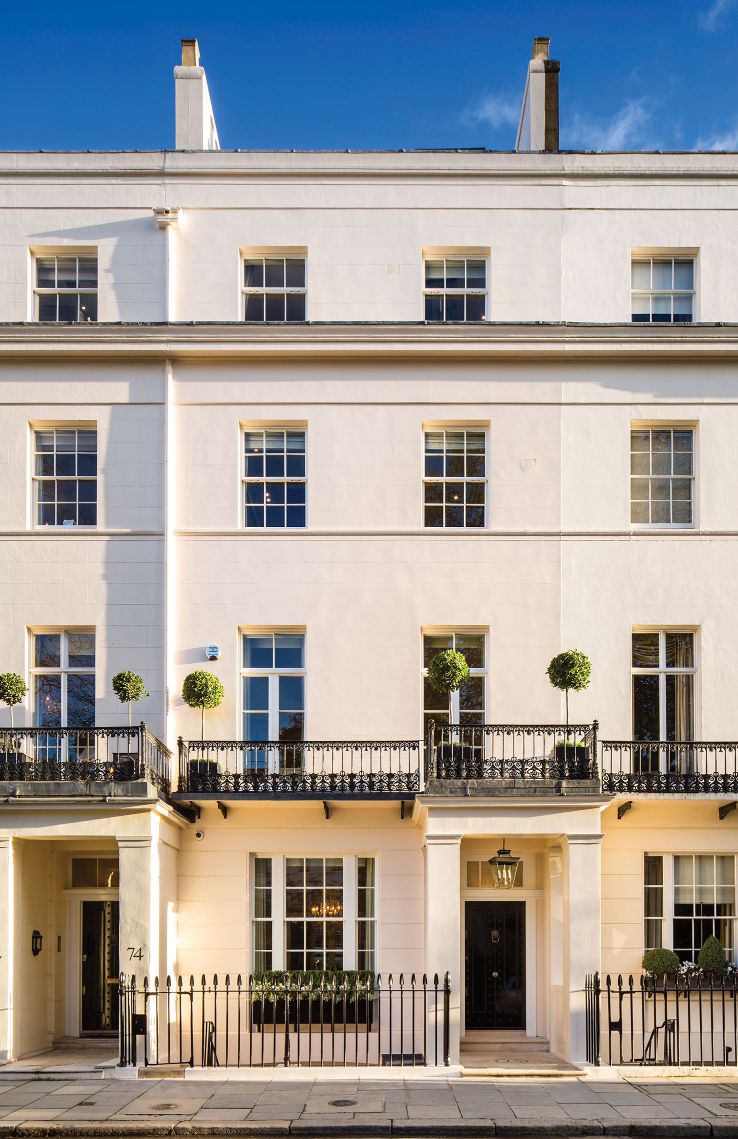 There are plenty of traditional touches: a drawing room with 11-foot ceilings, parquet floors, and views of Chester Square; a book-lined study; two original Louis XVI fireplaces; and Hopton stone flooring in the entrance hall, the same used in the Houses of Parliament. Yet the six-floor home also has an elevator, a home theater, a gym, and a temperature-controlled wine cellar that holds 500 bottles. There is also a roof terrace, accessed via a staircase from the family room, and off the kitchen there is a newly built mews house, which doubles as a garage. 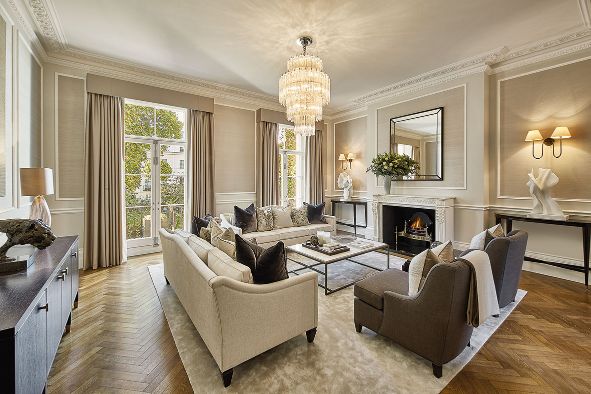 Thatcher resided in the property from 1991 until her passing in 2013. Now, following a three-year, multimillion-pound refurbishment by developer Leconfield, the property has come onto the market through estate agent Savills for £30 million ($43.4 million). 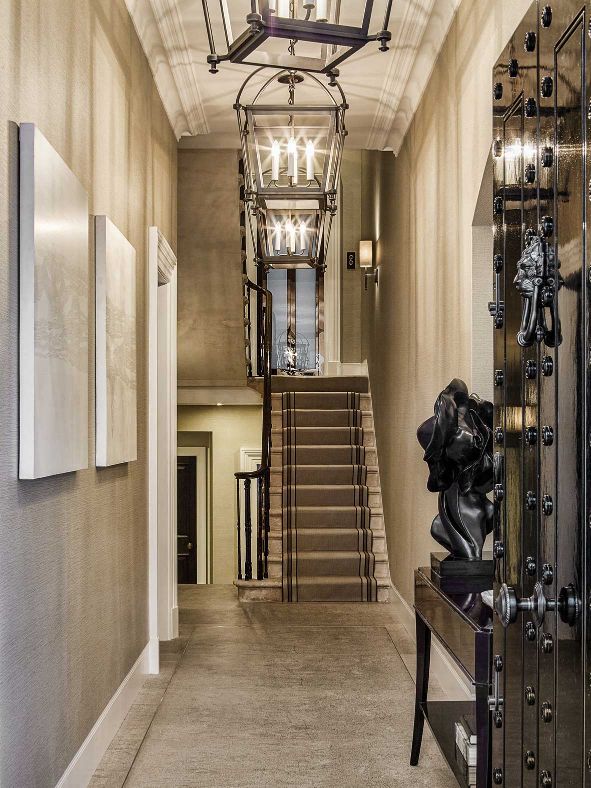 “Such an eminent and rare property, in terms of location, renovation, and history, number 73 will have a truly widespread appeal to any buyer at this level of the market looking for an exceptional London home,” says Richard Gutteridge, head of Savills Sloane Street office. “If only the walls could talk, one could almost imagine Ronald Reagan and other heads of state sitting with Baroness Thatcher in her dining room.”

Today, Brits might be more likely to wonder what the Baroness would say on the matter of Brexit, were she still alive. The Iron Lady’s former lieutenants have been in disagreement over what stance she might have taken on the upcoming referendum. But one thing is clear: Uncertainty over Britain’s future in the EU is the latest in a string of events that have dampened London’s property market.

In the period from 2009 to 2014, London repeatedly made headlines for record- breaking sales of super prime mansions to wealthy buyers from Russia, the Middle East, and Asia, many of them in the city’s central neighborhoods, the so-called golden postcodes that include Belgravia, Knightsbridge, Kensington, Mayfair, and Holland Park. But since 2014, the market has slowed. “There are definitely headwinds in the Prime Central London market,” says Sophie Chick, associate director of residential research at Savills in London. Some of the headwinds have come in the form of taxes. A new stamp duty rate, introduced in December 2014, charges a 10 percent on properties worth more than £925,000 ($1.3 million) and 12 percent on those more than £1.5 million ($2.5 million). Leading up to the general election in the spring of 2015, the Labour Party proposed an additional annual “mansion tax” on homes valued above £2 million ($2.8 million). Developers and estate agents hotly debated the issue, while buyers sat on the sidelines. In the end, the Conservatives won a majority government, and the tax was never implemented, but the outcome failed to spur increased property investment.

“A lot of people thought we would see a big bounce back with no mansion tax, but actually the new rates of stamp duty had a bigger effect than we thought,” Chick says. “We’ve had a very slow market over the past 18 months.” Savills’ figures show prices in Prime Central London have come down six percent over the last year. Deal volumes have dropped as much as 40 percent. This year, buyers of second homes and buy- to-let properties will face another tax, a three percent stamp duty surcharge intended to level the field between investors and first-time buyers, which went into effect in April 2016. Some investors moved to close deals ahead of the new regulations, but Chick says the majority of discretionary buyers have a “wait and see” attitude ahead of June’s referendum.

Over the past year, major foreign investors in British property have been hit with their own setbacks: low oil prices in the Middle East, currency problems in Russia, a recession in Brazil, and stock market turmoil in China, all of which have contributed to few high-end transactions. In 2014, Mideast investors made up 15 percent of Prime Central London buyers; last year they made up four percent.

But geopolitical concerns around the world also reinforce London’s status as a safe haven, says Richard Cutt of property agency Knight Frank. “The wealth preservation appeal of prime London property among U.K. and overseas buyers remains significant, most recently against the backdrop of falling commodity prices.”

Brexit’s impact on the sterling could also bring some overseas buyers back to the market, notes Camilla Dell, managing partner at buying agency Black Brick. The currency lost six percent against the dollar in the first two months of 2016 and almost 20 percent in the last 18 months. “As is so often the case, opportunity is the other side of the coin to crisis and, if you add currency, moves to the seven to seven-point-five percent falls we’ve seen in prices in Knightsbridge, for example, then prices are more than a quarter lower in dollar terms than they were 18 months ago,” she says.

For the moment, properties in central London are selling when buyers feel they are getting good value―namely, a reduction in asking price. But while the Prime Central London market stutters, prices are still pushing higher in the rest of London amid a housing shortage. In December the average dwelling sold for £506,724 ($729,244) up 11.2 percent from the year before, according to Land Registry data.
Adding to demand are buyers that a few years ago would have focused exclusively on Prime Central neighborhoods. “London has become far less area specific and far more product-driven,” says Simon Deen, director of new homes at Aston Chase. “Property buyers are far more savvy than they once were, and the understanding of the areas of London where medium-term growth is still possible is far broader than it once was.” Deen recently launched sales at a new boutique development in Maida Vale, an affluent residential area in the northern part of Paddington, west of St John’s Wood. Known as “The Villas,” the project includes eight newly built homes set within a private, landscaped mews. (Mews is a term used to describe traditional carriage houses built around a yard or court.) Designed by DMFK Architects, the mews houses have three bedrooms, an open- plan kitchen, private terraces, and parking. Aston Chase is currently listing one Maida Vale property for £1,595,000 ($2,296,800). 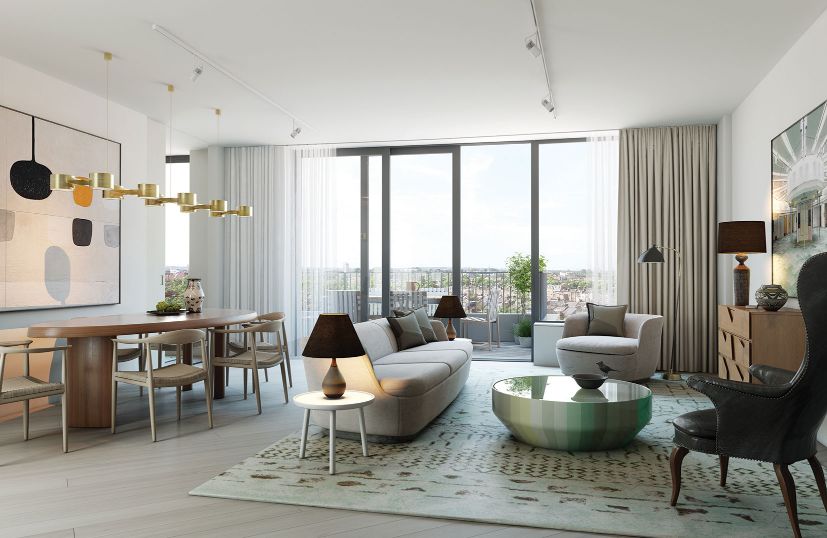 Outside of prime London, developers are also building large-scale, mixed-use projects. To the west, White City is the site of a $10 billion overhaul in which developers hope to transform the area from a stark, largely commercial landscape into a lively neighborhood with 5,000
new homes, shops, and an office hub for media- related companies. As part of the revival, London developer Stanhope is converting the former BBC headquarters into luxury residences. Most of the apartments at the Television Centre will be inside the curving 1950s building shaped around a circular rotunda known as “the doughnut.” One-bedroom units start at £650,000, ($934,900) while the five penthouses, priced up to £7 million ($10 million), are located at the top of the building next to a Soho House rooftop pool and bar while overlooking a public piazza. 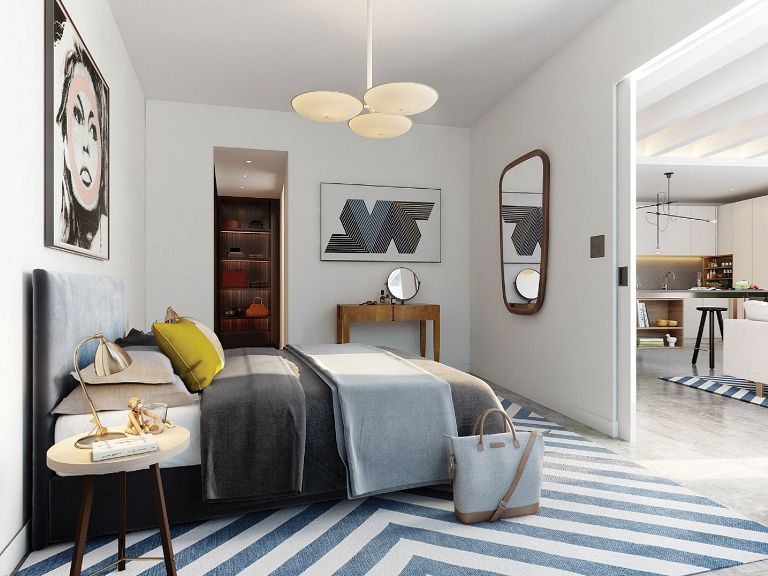 Bedroom at the BBC Television Centre

Tall towers are also proliferating in a city that was once defined by a more uniform, low-scale urbanism. One is a yet-unnamed tower at Canary Wharf by Herzog & de Meuron, which has been nicknamed the Rolling Pin because of its circular shape. Slated to rise to just over 718 feet, it will be one of London’s tallest exclusively residential buildings when completed in 2019. 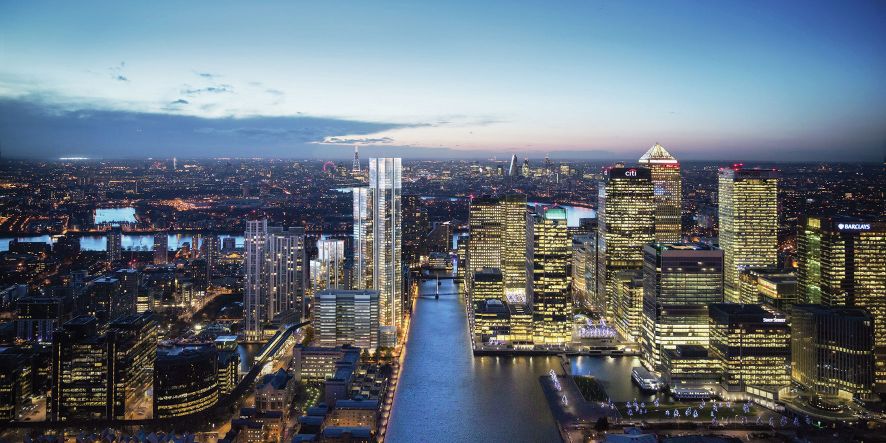 Another is a Foster + Partners-designed tower at the adjacent South Quay Plaza development. The 68-story tower will rise to 722 feet and be built at a 45-degree rotation to maximize water views and dual aspects. Each apartment will also have floor-to-ceiling glazing. Prices start from £599,950 ($862,900). As part of the project Berkeley Homes is also building a smaller 36-story tower and cafes, shops, restaurants, and a new dockside promenade. 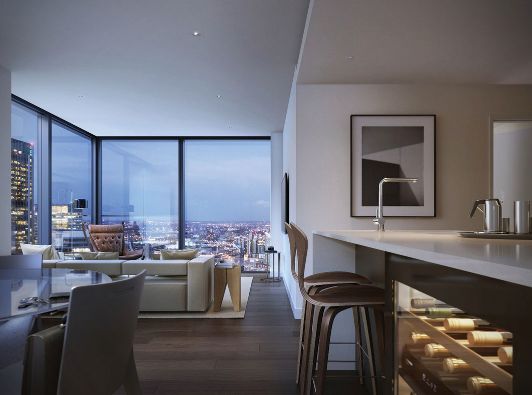 Canary Wharf is appealing to investors seeking a good lifestyle with easy access to the central business district―a new Crossrail, scheduled to run in 2018, will cut travel times to central London. Other emerging hotspots for new-build properties include the South Bank, where CIT Group is building the South Bank Tower, and the Nine Elms regeneration scheme, which includes the redevelopment of Battersea Power Station. Outside of London’s prime areas, Savills predicts price gains of about two percent over the next five years, while the Prime Central London is forecast to remain relatively flat. “Assuming we don’t leave the EU,” says Sophie Chick, “this year we anticipate no gross gains in Prime Central London. It will take time for the new tax to be absorbed in the market.”

This story is featured in the Summer 2016/Fall 2016 issue of Haute Residence magazine. Click here to flip through the digital magazine.