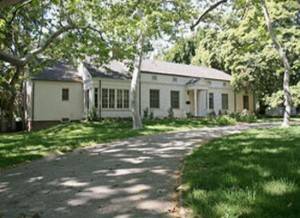 Kim Kardashian and Kanye West have both put homes on the market in what could be a prelude to choosing a home together.

The couple has pocket listed their homes, meaning that the properties won't show up in real estate documents and the agents have exclusive rights to show the homes.

Kardashian is peddling her 6,700-square-foot mansion in the Mullholand Estates community in Beverly Hills. She bought the property for $4.8 million and has placed a $5 million price tag on the home for listing.

West is offering his Los Angeles mansion for $3.9 million. He bought the home in 2003 for $1.75 million. He also owns another home in Hollywood Hills designed by Claudio Silvestrin.

No word yet on where the couple may be looking for their home together, but there is speculation that the couple would remain in Los Angeles. Reportedly, they would also maintain rental properties until they decided to fully take the plunge and have a family together.