Dubai skyscrapers are typically tall and modern, but none ever tempted us to grab a joystick for a game of Pac-Man—until now. The “Maze Tower” proves architectural gamesmanship can have a visceral or bewildering affect on modern observers in the digital age.

Recently crowned by the Guinness Book of World Records as the world’s “largest vertical maze,” Dubai’s 55-story Maze Tower playfully embraces the visual lines of its asymmetrical balconies to create an elevated labyrinth whose bright LED lights illuminate its ambitious design—and the skyline—for all to see at night. 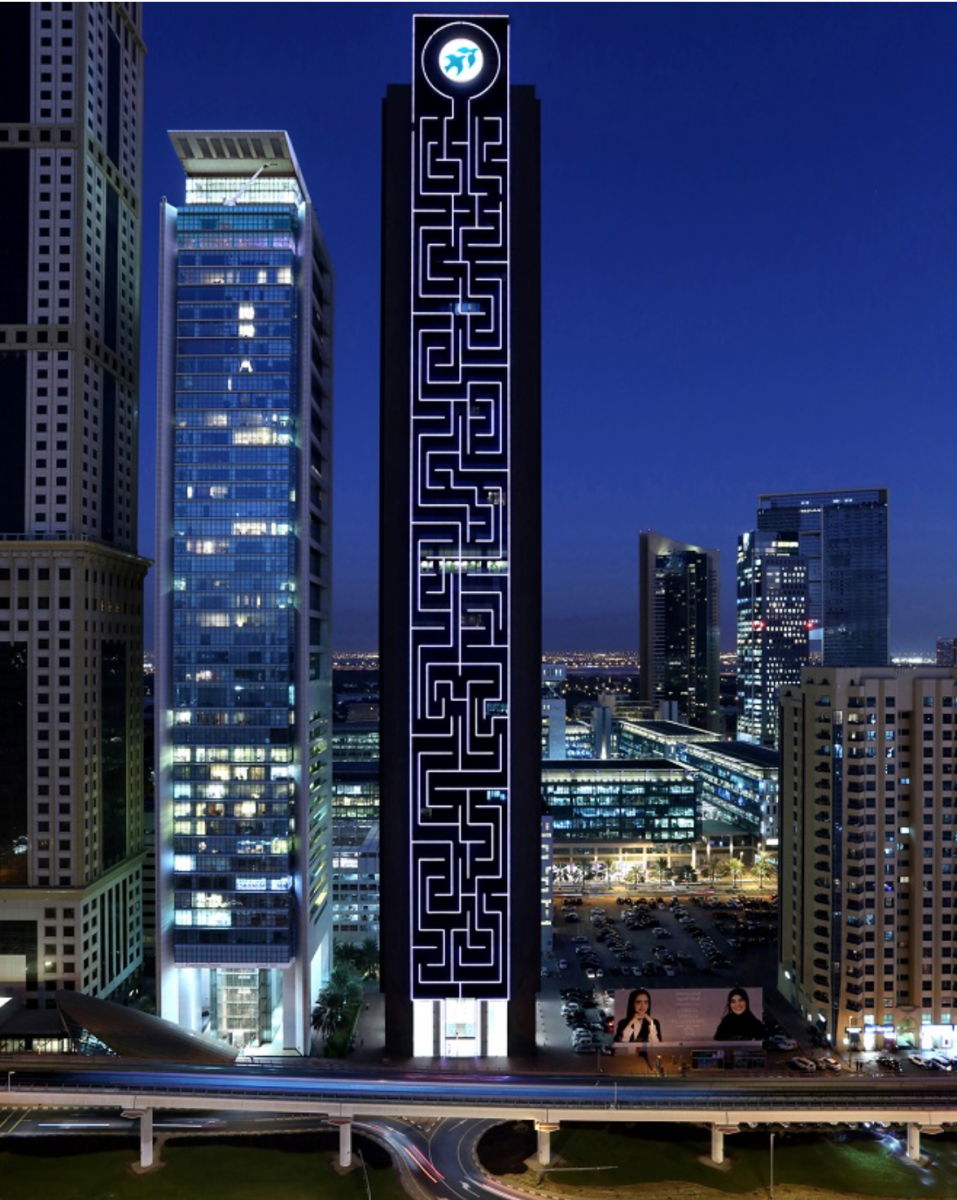 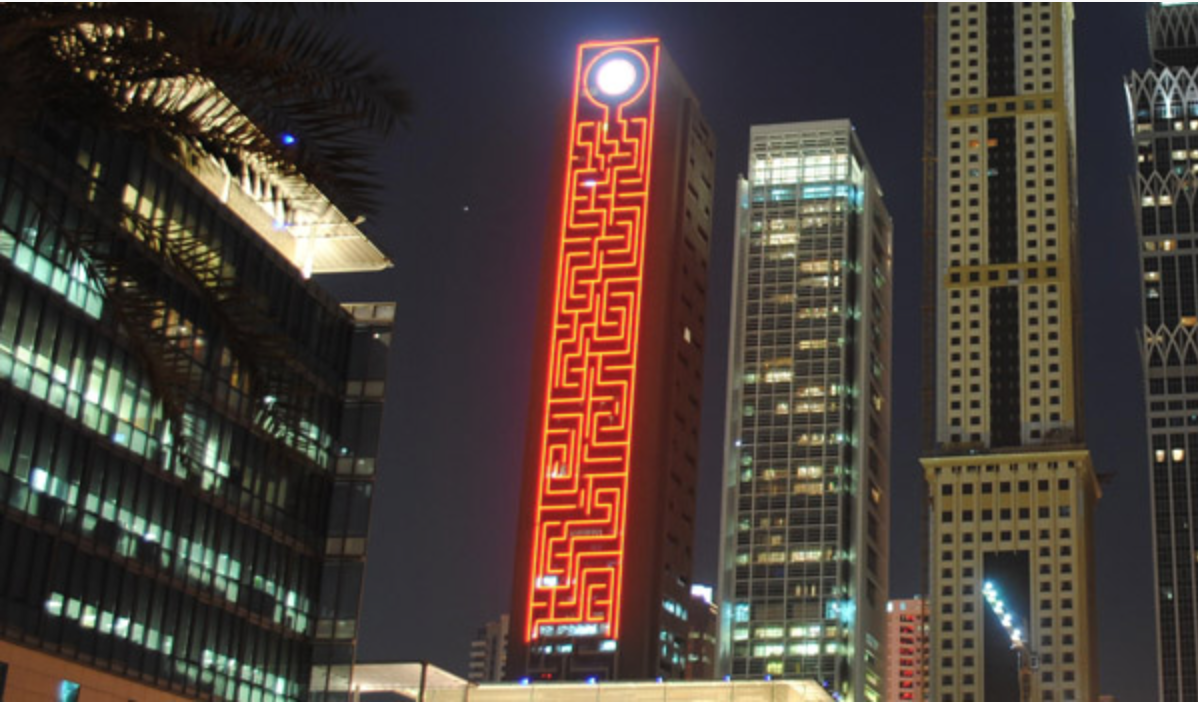 Developed by the Al Rostamani Group and completed in January 2012, the Pac-Man Tower (sorry, Maze Tower) is located in the heart of Dubai’s Financial District and serves as the firm’s corporate headquarters. Chairman Marwan Abdulla Al Rostamani said the tower’s inspiration came from the creative and innovative changes occurring throughout Dubai and the United Arab Emirates. Yet it resembles a carved obelisk ordered by the hand of an Egyptian pharaoh.

“We always wanted ‘The Maze’ to look like it was carved out of one massive piece of rock, with the constant play of light and shadow to render it alive,” said Hassan Abdulla Al Rostamani, vice chairman of Al Rostamani Group, who conceptualized the tower (perhaps he’s a secret gamer?). 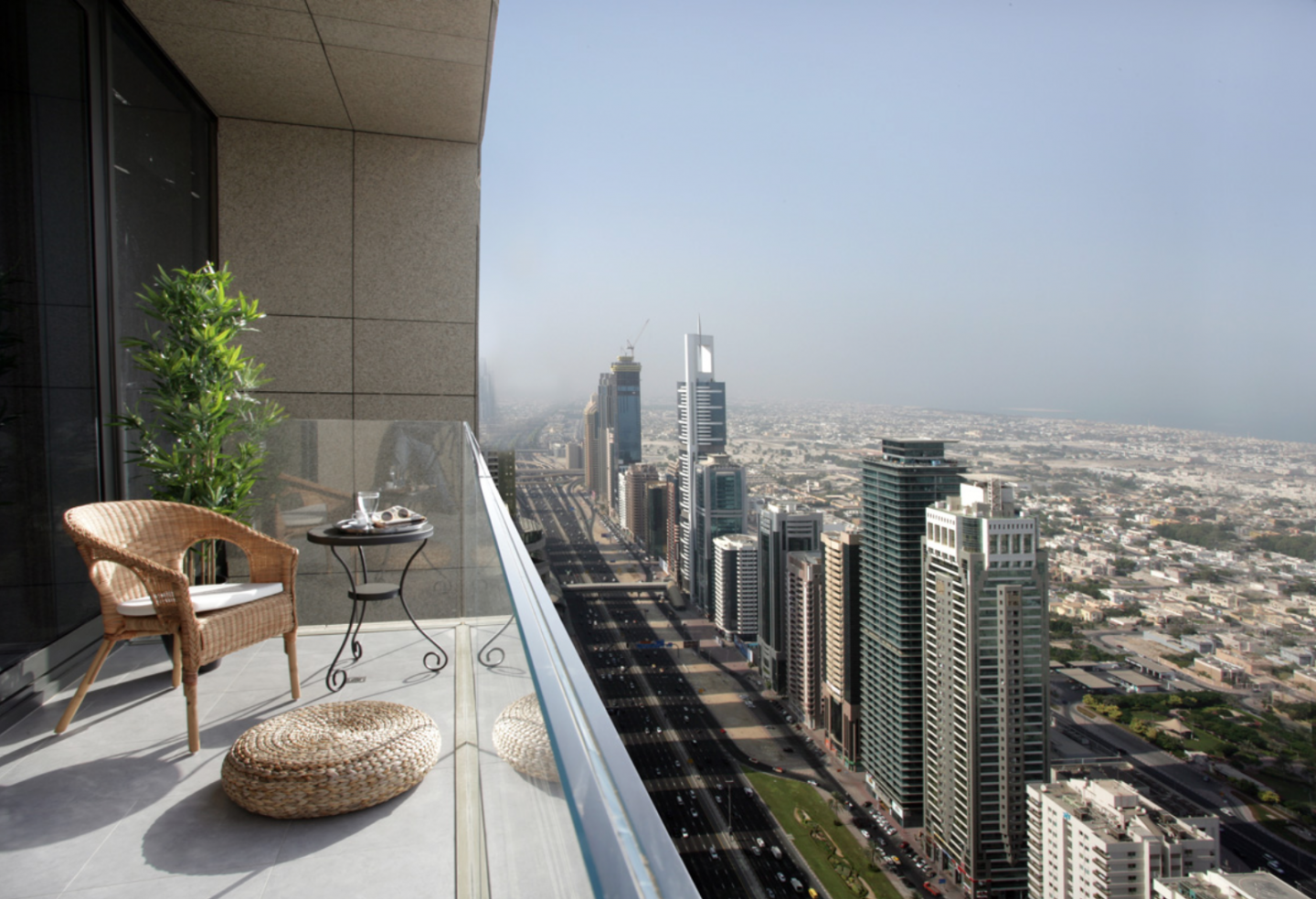 The Maze Tower is located on Sheikh Zayed Road, in the heart of Dubai’s Financial District.

Now an icon on Dubai’s skyline, the Maze Tower—which is actually not just a random pattern, but a thoughtful, doable puzzle—is a mixed-used building showcasing 24 floors of residential living space and 25 floors of prime office space. It offers one- and two-bedroom residences, duplexes and two penthouse layouts. Joysticks are not included—a-mazingly enough.

The unique structure is crafted of Brazilian Verde Bahia natural stones that were hand-selected for their aesthetic and tactile appeal. According to the Al Rostamani Group, a water jet treatment created the building’s darker greenish hue and matte surface. The lighter hue was achieved using a flame technique that roughened the surface for a lighter, more reflective surface. 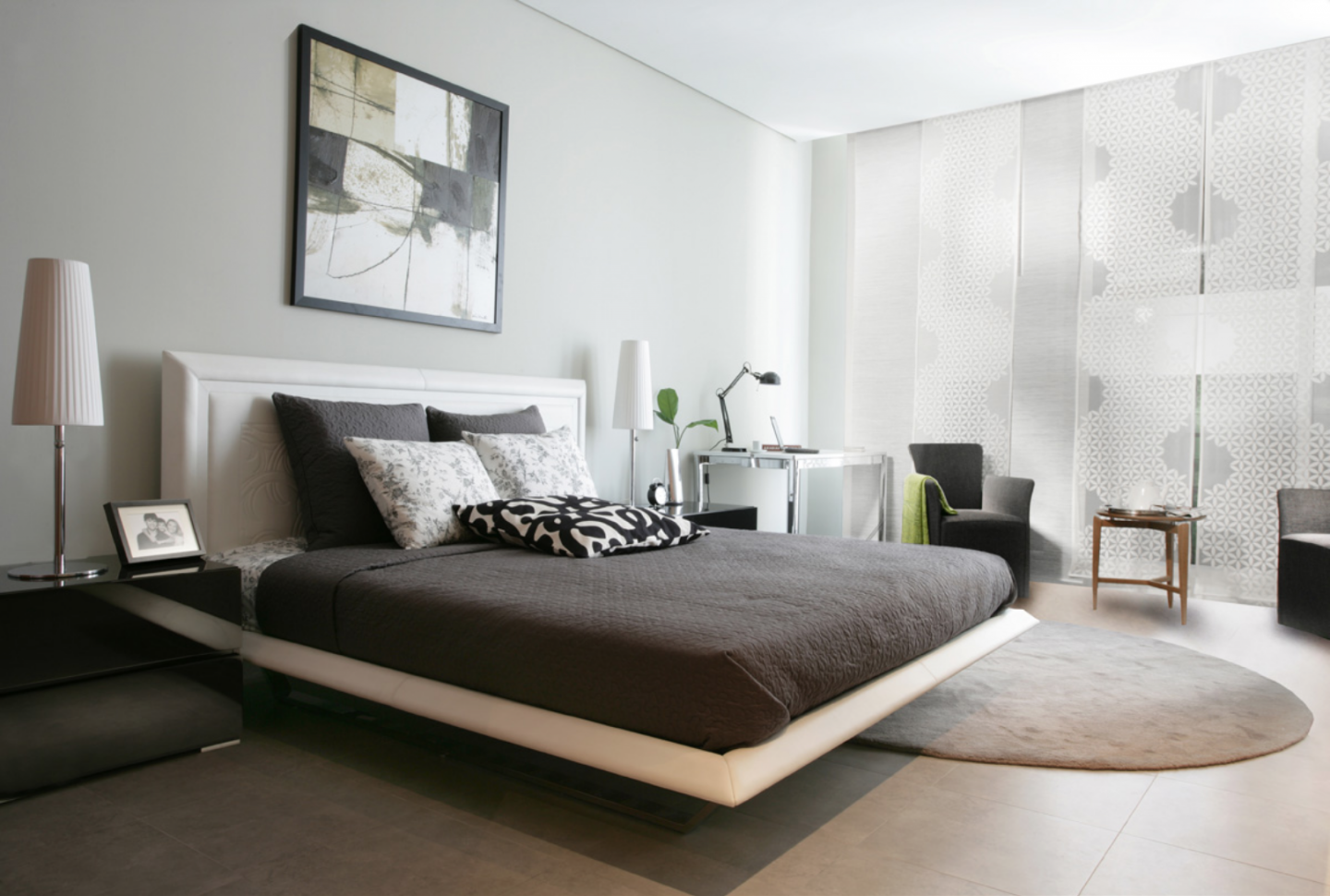 The Maze boasts one- and two-bedroom residences, duplexes, and two penthouse layouts. 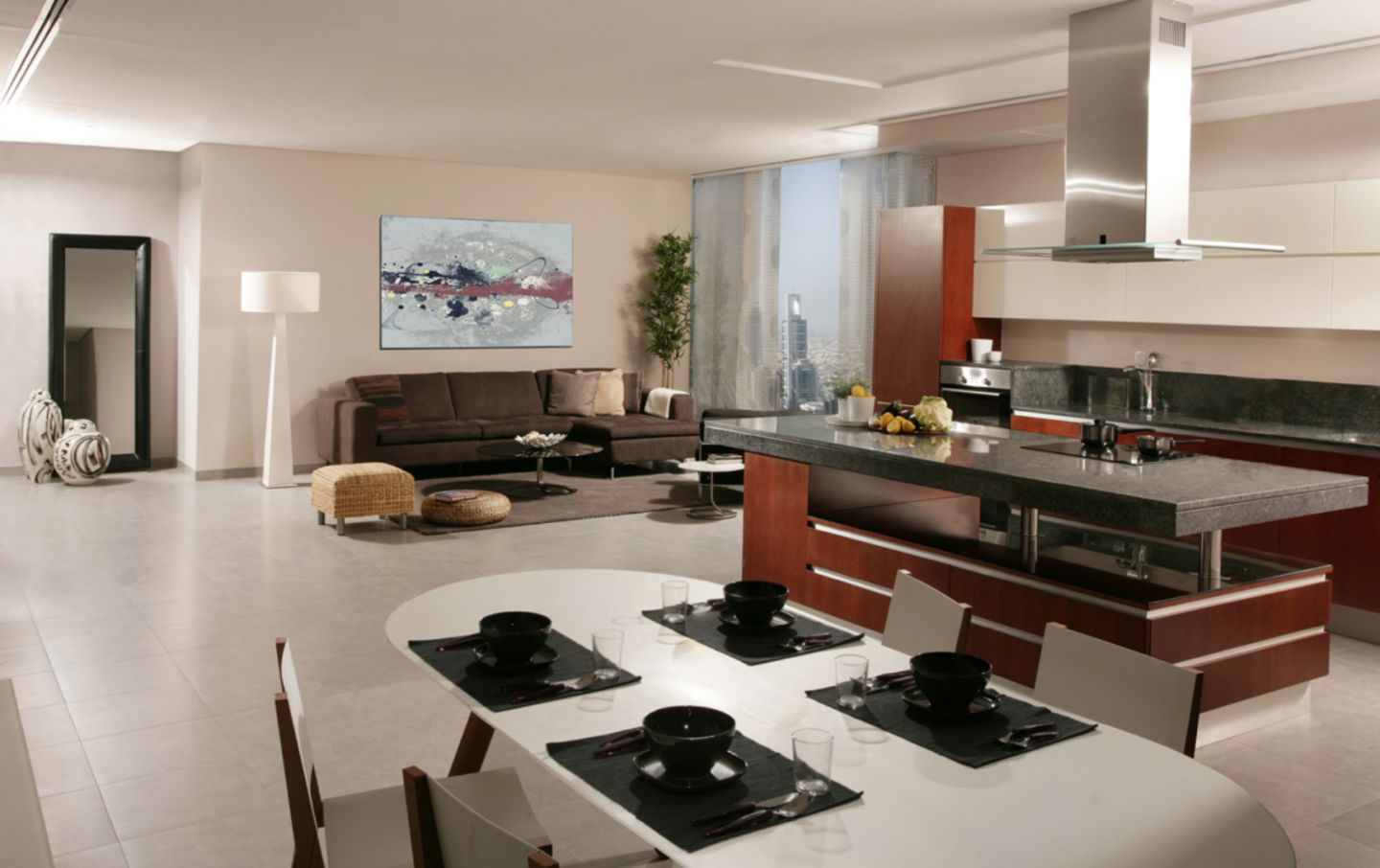 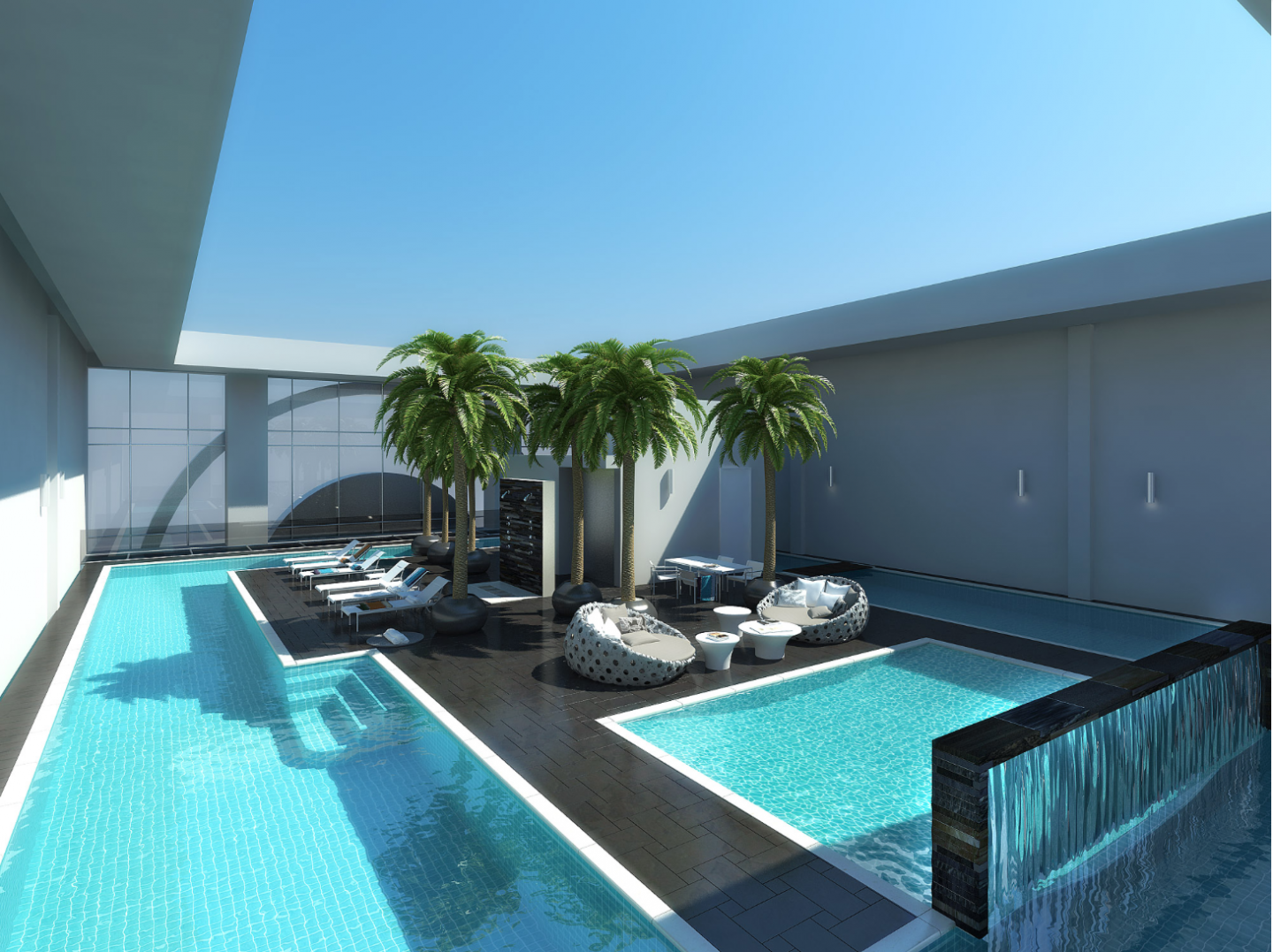 The intricate balconies on the tower’s front and rear façades form the shape of a maze, which also create real puzzles, according to the Guiness Book of World Records. To the ancient eye, the Maze Tower might resemble some sort of carved obelisk ordered by the hand of an Egyptian pharaoh. But that simplistic view doesn’t give the modern structure enough credit. We see it differently. By day, the Maze Tower looks like a virtual analog version of the classic video game Pac-Man. But by night, it goes full arcade—sans Pac-Man and his enemies “Blinky,” “Inky,” “Pinky” and “Clyde.” 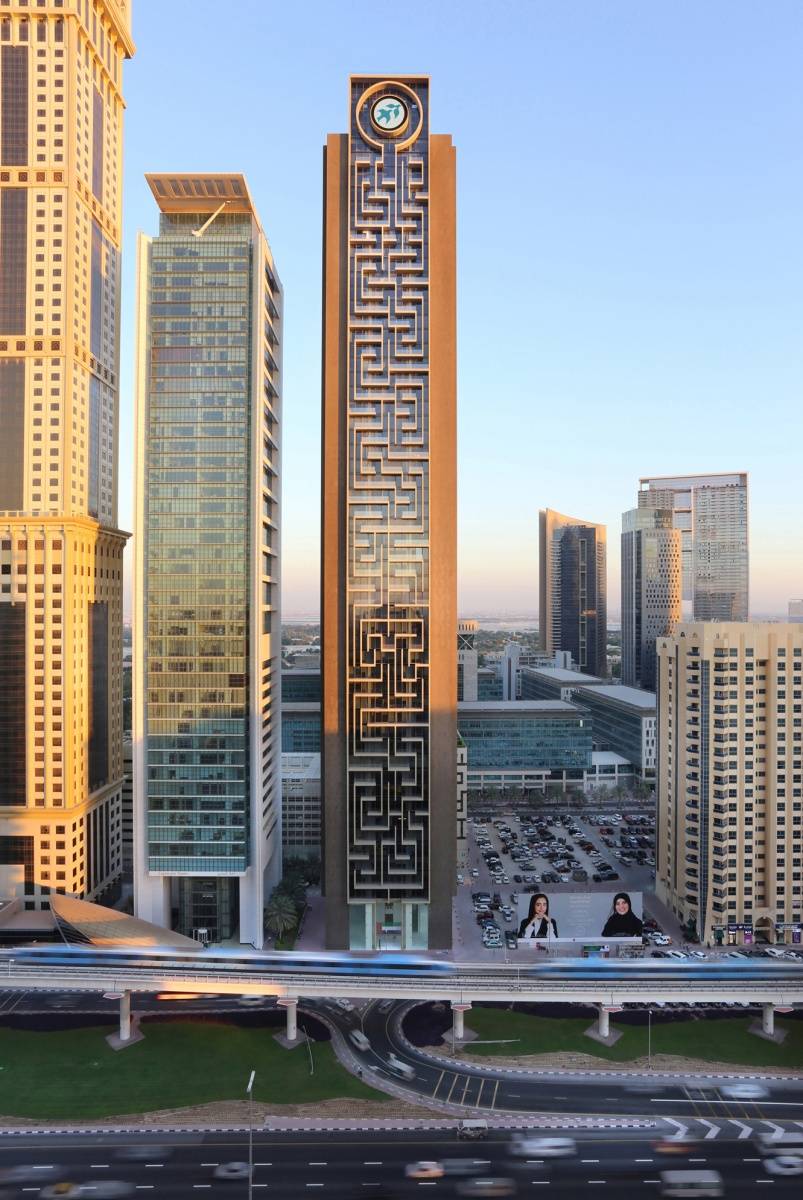 Instead the Maze Tower boasts the Maze Eye: an eight-meter circular video wall at the top of the building that beams images at great distances, and LED lights built into the exterior façade of the maze pattern, which can display a variety of colors and patterns (like the Pac-Man game). The building also features urban, green sanctuaries—two floors of tranquil gardens (with trees, planted walls and a children’s play area) in the middle of the building, and a rooftop garden maze. 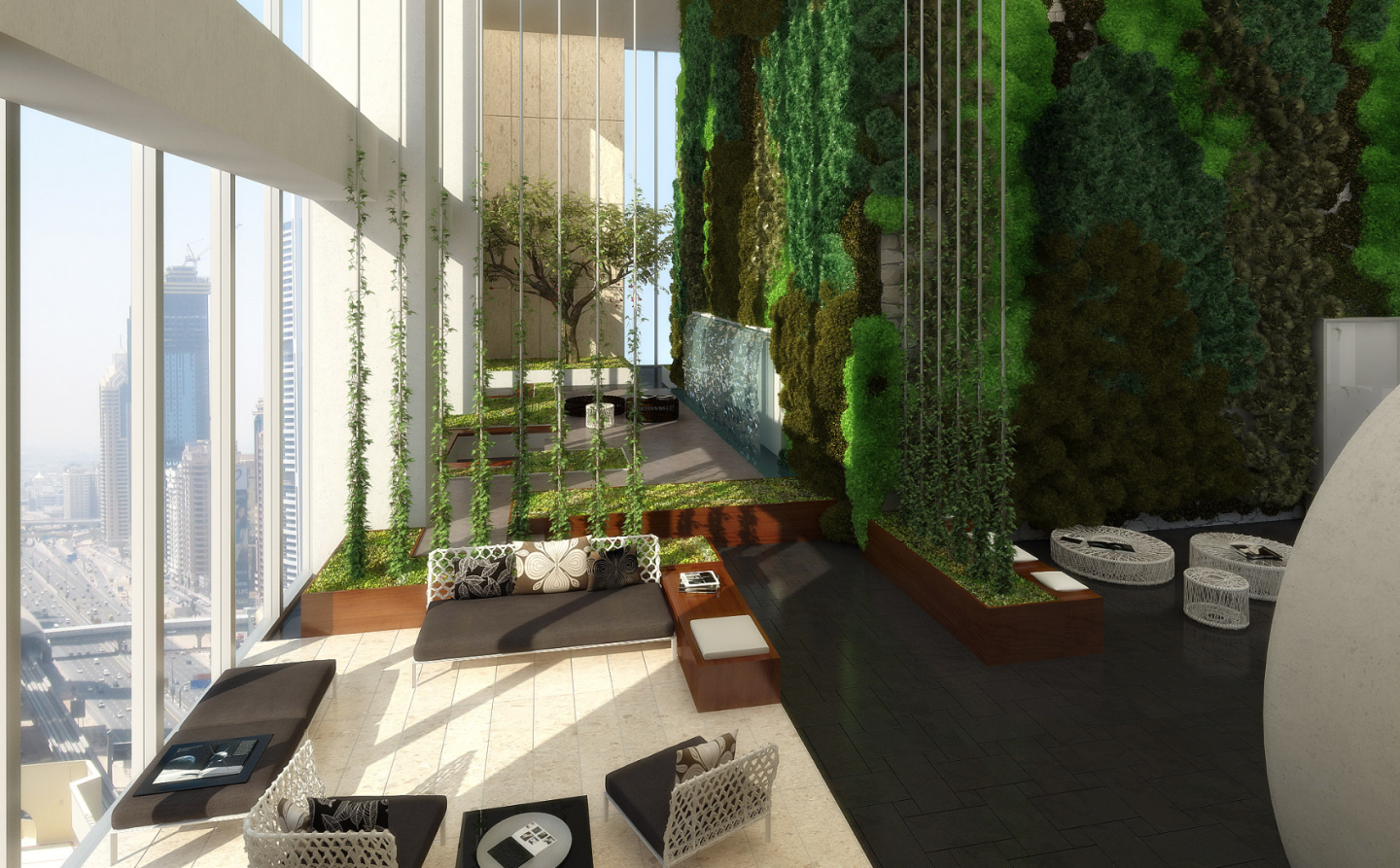 The tower offers two floors of tranquil gardens, including trees and planted walls. 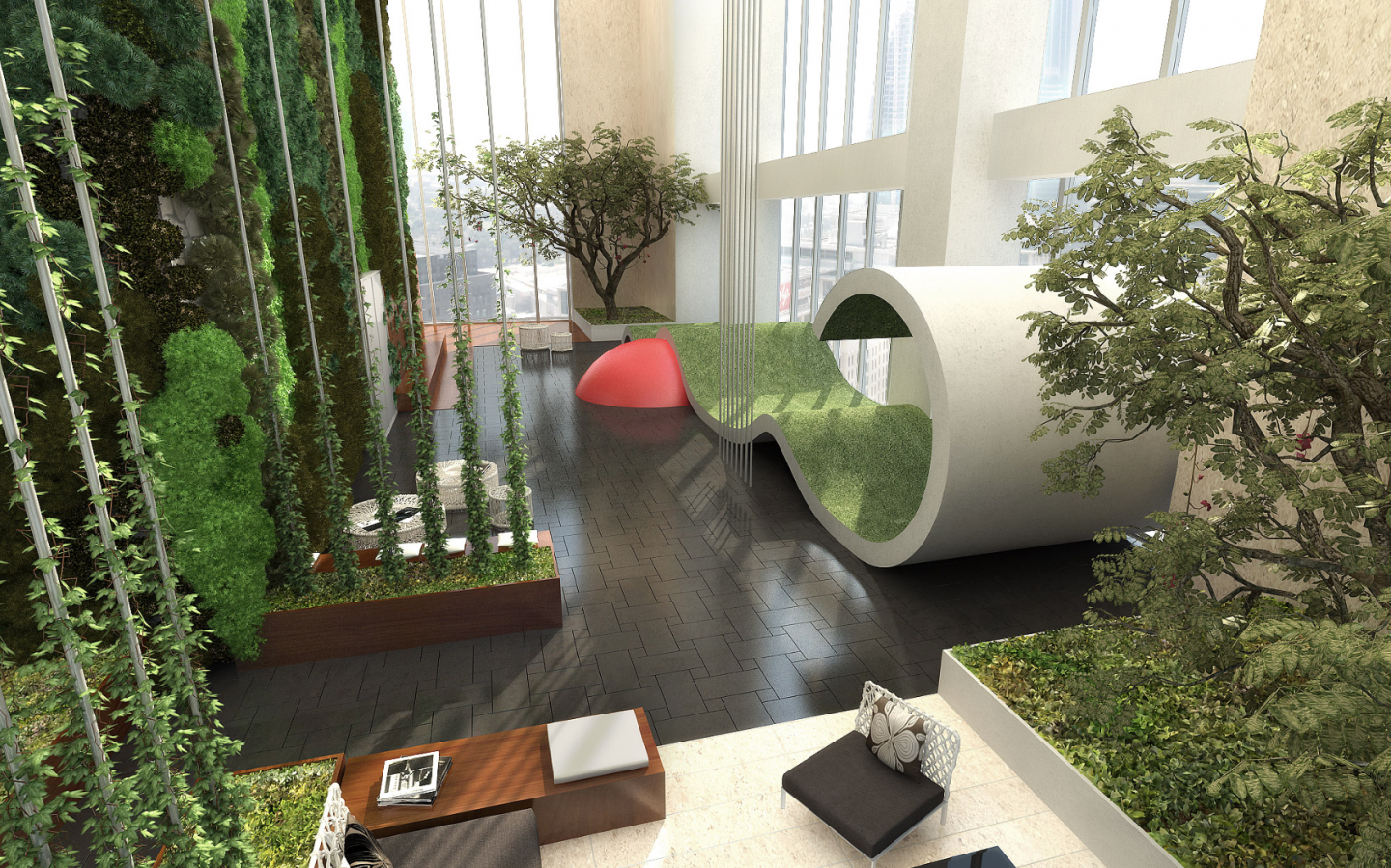