Getting Zen With Jen: Homes Of Jennifer Aniston Through The Years

Jennifer Aniston, everyone’s friend, has a timeless sense of taste. From her street style to her red carpet apparel, Jen sets the stage from what to wear, to where to live. With, of course, her classic movie star glam.

And over the years, Jen has lived in some coveted hotspots – from Beverly Hills to New York City to Bel Air – and has set some intoxicating A-list trends in home design, much like she’s done with her hairstyles. And as you’ll see below, the Jen Effect remains at full throttle.

Jen’s real estate mantras include: Sexy, comfortable. Contemporary cozy-chic. Sun-filled bliss. Her homes over the years have mirrored these mantras and her personalized panache. As you can imagine, her life is filled with deep-hearted connections and, as a result, so have been her cozy living rooms. Jen currently resides in her Bel Air home. For now. 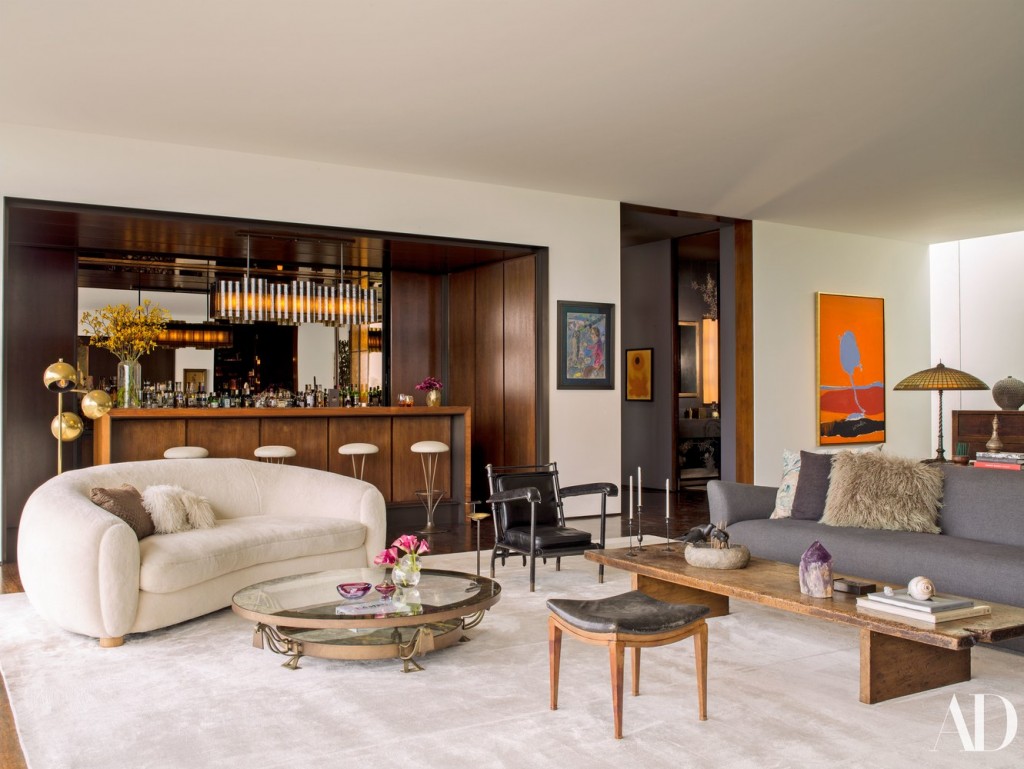 Situated in Bel Air, this living room of Jen’s evokes a subdued color palette with hip accents and a deft mix of various furniture shapes that together fill this space with Jen’s effervescence. The neutral tones throughout this room integrate sophisticated-glam with chill n’cozy. The accessories are playful: from the shag throw pillows nestled atop a vintage velvety-soft white sofa, to the seamless integration of a presumably fully-stocked bar with swiveling barstools. In this living room, you immediately feel a connection with Jen’s aesthetic, as you also do with her. 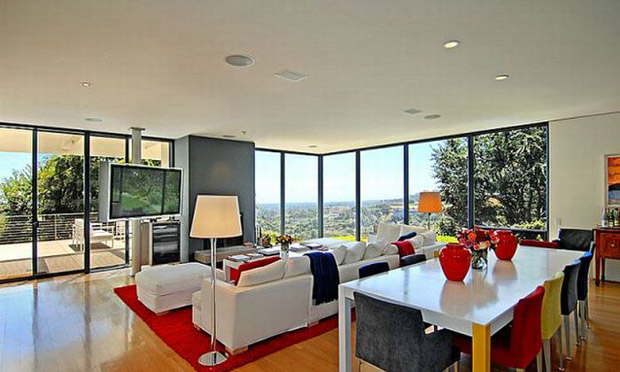 Through the floor-to-ceiling windows, the natural light effortlessly shines into this second Bel Air living room of Jen’s, and gives the space an effervescent glow throughout the day. It’s sun-kissed; it’s light-hearted; it’s sleek-serene; it’s sexy-chic. All of which are also Jen. Who would need yoga if you could hang out in this living room? 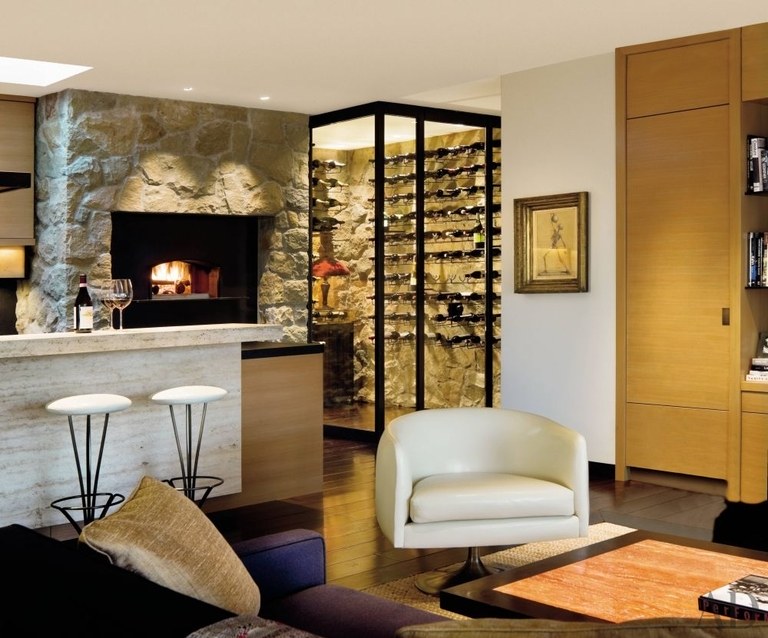 Just as Jen is tanned, toned and fit, her former Beverly Hills digs were bronze, stone and wood – materials that have real substance. Jen knew that no matter how strong something was, it also had to be warm and inviting. Her former living room in Beverly Hills reflected this  balanced combination of hard and soft that resulted in upscale, cozy elegance. Aniston style.

Jen Aniston moved to Bel Air and brought along certain items that had a sentimental meaning to her: a Robert Motherwell painting that cost $1.2 million, her oversized bedroom lamps, and her Tiffany lamp that she had for a number of years. Decorative compositions incorporating all of these nostalgic pieces make her Bel Air house a home. Her home. 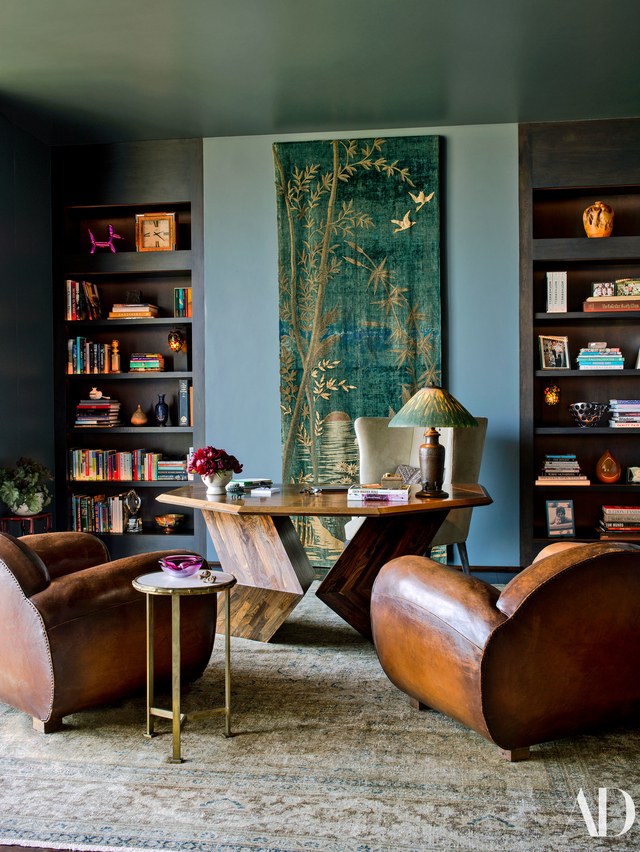 Jen’s office has a modern, midcentury feel with its oversized leather chairs, oriental neutral rug, Japanese wall hanging and sleek wood desk that is itself abstract artwork. Yet for all the pieces on display in this small cozy space, there remains a harmony that flows to and from the rest of the home’s interior space that quietly speaks to Jen’s personality. Her business persona meets her playful persona that both eventually meet up with her zen persona. The perfect real estate Aniston trifecta. 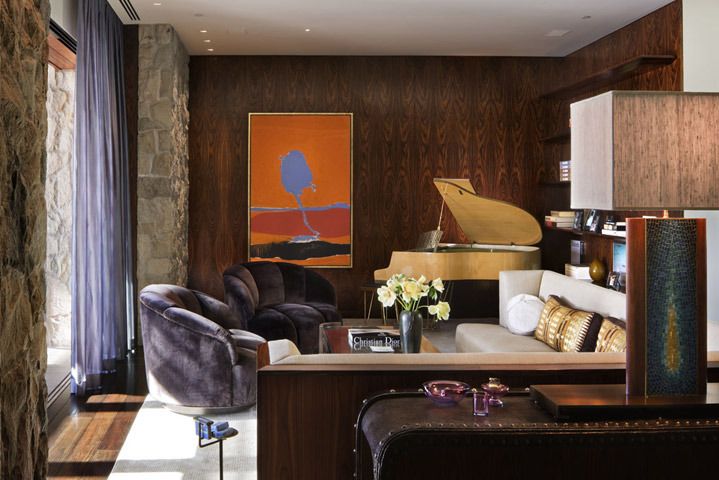 You can imagine if Jen got sand in her stilettos, that she’d merely laugh it off, softly brush it off. This nook in her former Beverly Hills home had that vibe: super-stiletto-sexy collided with cozy-classy-comfortable, all of which were sun-kissed with warmth and depth. Whether Jen was curled up on the couch and reading, or listening to a musician friend play her piano, her nook spoke to her own individual personality. The space was centered around that Robert Motherwell painting: the very same one that now hangs in Jen’s Bel Air living room. It’s one of Jen’s treasured keepsakes and wherever she goes, it goes. Wonder if and where the Motherwell will go next?

Jen’s Bedrooms Speak To Her Calm, Cool and Collected Side

Jen is all about harmony: her residence is as much an experience as it is her home. 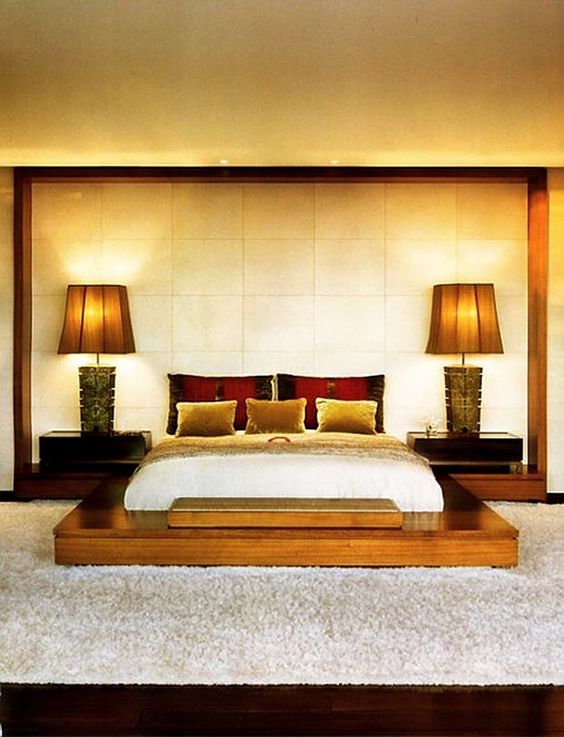 Jen’s former Beverly Hills bedroom felt zen and had an absence of movement that equated to luxurious ease. The oversized lamps, the king-size bed, the geometic-shaped back wall and the rug were each individual design staples that enhanced the soft elegant minimalism of the bedroom against its hard squared-shaped lines. Amongst the various rectangular and square shapes throughout this bedroom, you can almost feel the silkiness of the bedsheets, the ease of the room and softness of the plushy carpet. What was not included also made a statement: no television, no bare floors and no expansive windows. This peaceful bedroom screamed pure privacy.

What’s most memorable about Jen’s former NYC bedroom was the light. That white, bright natural light made this bedroom so inviting and tranquil. Jen must have spent her days here doing yoga and frolicking with her dogs.

The portrayal of faces on the wall, the dazzling hanging light fixture, the zebra-printed footrest and wavy-shaped rug worked together in harmony to create an intelligent, chic playful vibe. Here again was that frisky side of Jen expertly integrated with her exotic and sublime sides. 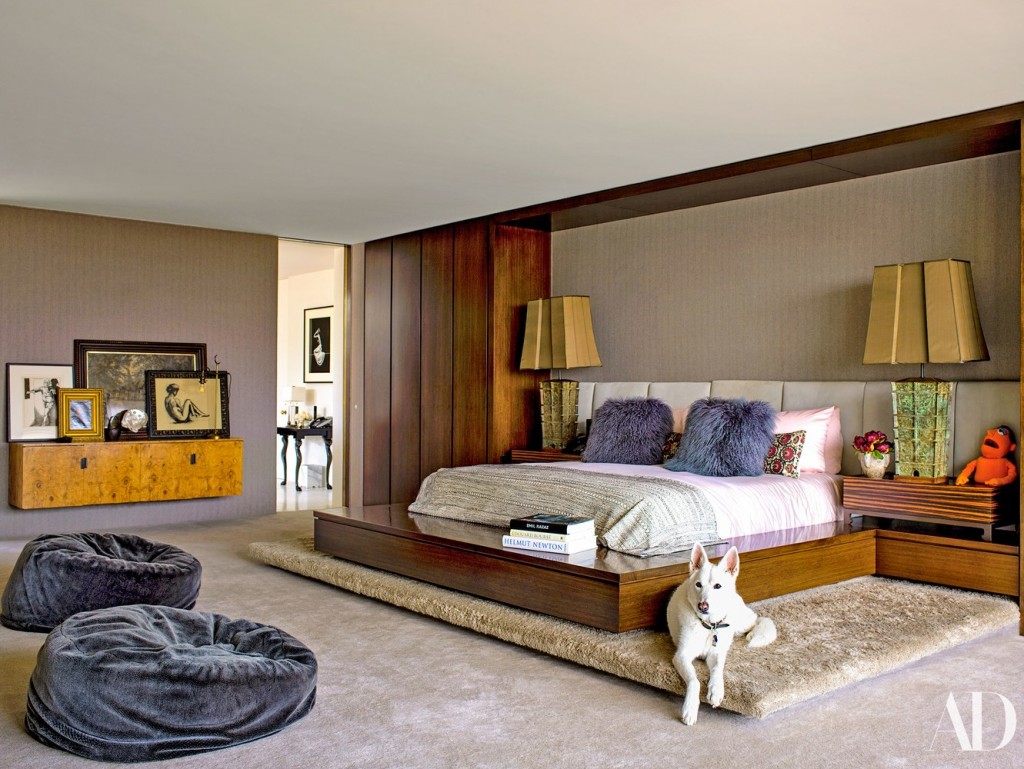 With Jen’s Bel Air bedroom, there are many similarities in her choice of design with her prior bedrooms. Her chill attitude coupled with her classy sophistication is evident in her current bedroom. The intimate details reveal her signature design and persona: the sexy, comfortable woman: see those velvety, comfortable beanbag chairs and shag throw pillows with matching luxurious deep purple color; the playful, lighthearted friend: see the muppet Ernie seated on the bedside table with another caricature; the professional artist: see the framed, sketched drawings of the female form on the wall credenza that are as womanly as they are sexy.

So, what’s next on the horizon for Jen? It seems a new home always accompanies Jen at the beginning of a new phase in her life. As she now begins another empowered phase of her life as a single woman, you can probably expect that this stage will involve a new home. Will probably include those treasured keepsakes of hers. Will probably be located somewhere on the golden California coast. Will probably have those special zen spaces where she can chilax with her dogs and friends. After all, once you’ve been sun-kissed as much as Jen has, there’s no turning back.

Back in 2006, Jen had purchased her Beverly Hills estate that sat three doors down from her on-and-offscreen BFF, Courtney Cox. Maybe becoming a neighbor to her BBF again will be Jen’s next real estate adventure. If she does, it could be that Friends reunion episode that so many have pined to see over the years. Except in real time.