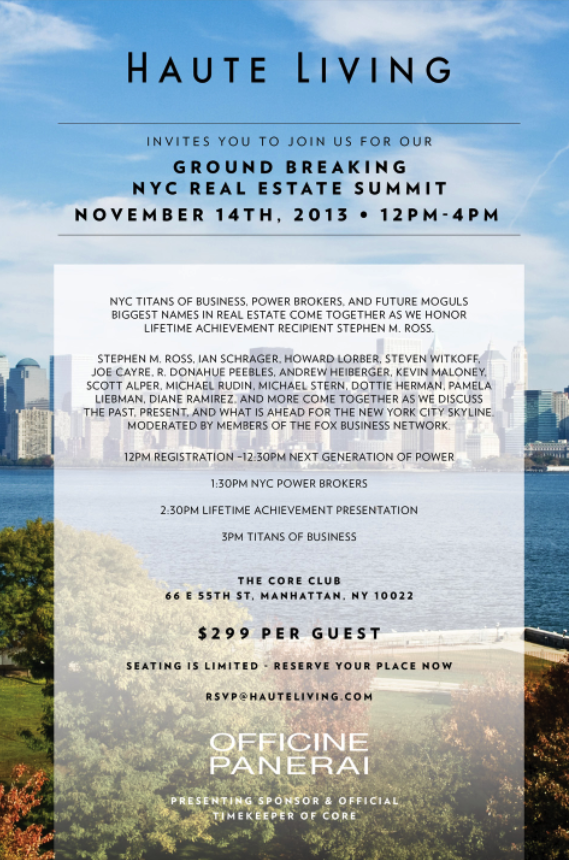 The collective masterminds behind half a trillion dollars in real estate portfolios and sales transactions will join together in one room, including: Stephen M. Ross, Ian Schrager, Howard Lorber, Steve Witcoff, Joe Cayre, and more. The event will be moderated by Dennis Kneale and Melissa Francis of Fox Business Network.

$299, includes lunch and your place in our summit. Seating is limited. RSVP now: rsvp@hauteliving.com

Registry begins at 12pm, with the Next Generation of Power presentation at 12:30pm. This will be followed by NYC Power Brokers at 1:30pm. Coffee and desserts will be served at 2:15pm before the Lifetime Achievement Honoree presentation at 2:30pm. The day will finish with the Titans of Business Developer Panel who will field questions from 3pm to 4pm.

Mega-developer R. Donahue Peebles stood out on the panel in Miami at Haute Living's first Real Estate Summit, which proved to be a smash with brokers, agents and interior designers. The New York event is sure to be packed with intriguing discussion, revelations and heated debate, and will run from noon to 4pm.

Miami power developer Edgardo Defortuna of Fortune International was a contributing force on the Miami Real Estate Summit panel. Now, Fortune International will be a presenting sponsor of the New York Summit, featuring their gem, Jade Signature, created by Herzog & De Meuron. In Miami, Fortune’s Jade series of buildings are known as the height of luxury. Panerai Watches is also a presenting sponsor of the real estate focused afternoon, adding their touch of luxury and as the official timekeeper of the Core Club. The Related Companies will feature their incredible One Madison with a $50 million triplex penthouse rising above the skyline.

The Haute Living Titans of Business Summit will be hosted at The Core Club located at 66 E 55th St, Manhattan, NY 10022