While Candy Spelling awaits completion on her new 16,000 square foot $47 million two-story penthouse The Century, the most expensive condo purchase in Los Angeles history, she is planning to move into a 5,600 square foot unit at The Carlyle Residences on Wilshire.

While she may be downsizing from her 56,500 square foot mega mansion in Holmby Hills, which sold for a cool $150 million, she is by no means downgrading. Instead Candy visited The Carlyle at least five times before choosing and purchasing her new abode, probably because the extensive grounds and amenities took that long to preview. 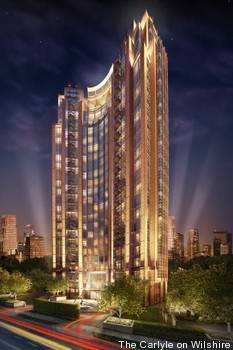 The crescent-shaped building boasts 78 luxurious units, with private elevators and 24-hour concierge, doorman and valet.  The high-rise also has a temperature-controlled wine cellar with private lockers for each resident, fitness center, pool, and lush gardens with private seating areas and fireplaces.