Beyond the Box: Straying From Traditional Design Ideals 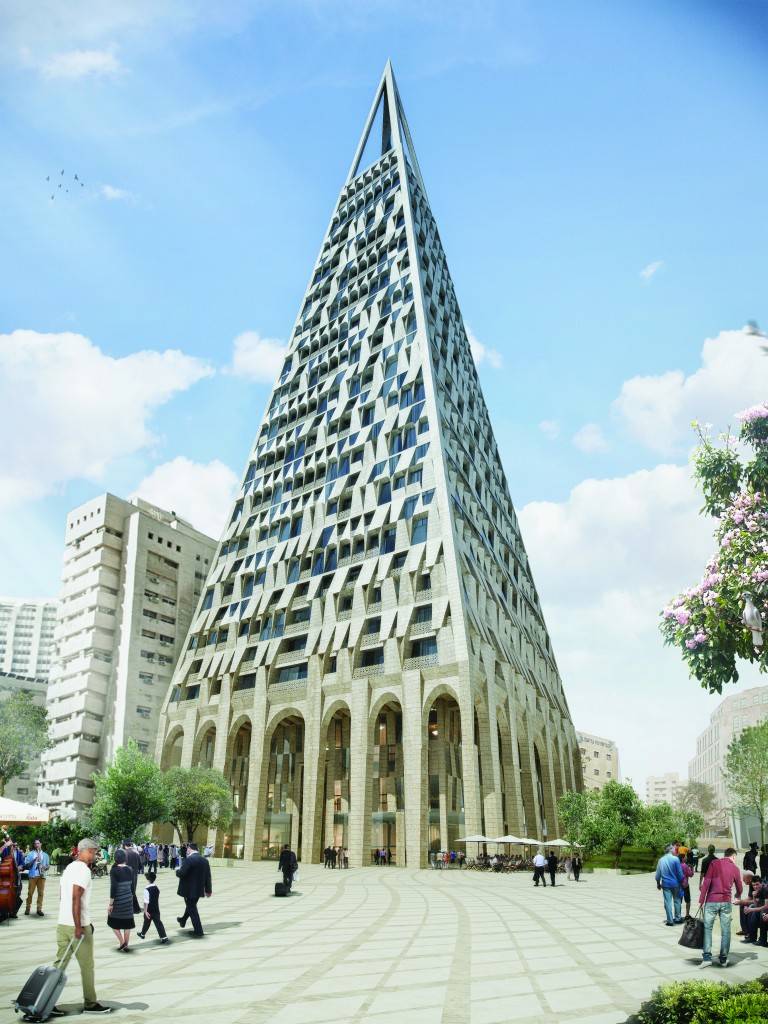 Jerusalem might be one of the most difficult places to get new buildings sanctioned, but the ancient city has approved this tower designed by Studio Libeskind in collaboration with local architect Yigal Levi. Located near Mahane Yehuda Market, an open-air market and a popular entertainment area, the 345-foot "Pyramid Tower" is to be Jerusalem’s second tallest building. According to Daniel Libeskind, the pyramid “mediates between ancient traditions and myths, while providing a 21st century reinterpretation of that great form.” The design also references the city’s existing architectural vernacular with a façade that features geometric patterns composed of local stone and glass. The architects say the building’s tapering form was chosen to allow light to fall on the public plaza below. When complete, the project will feature 200 apartments, a boutique hotel, and a rooftop observatory with views over the ancient city. 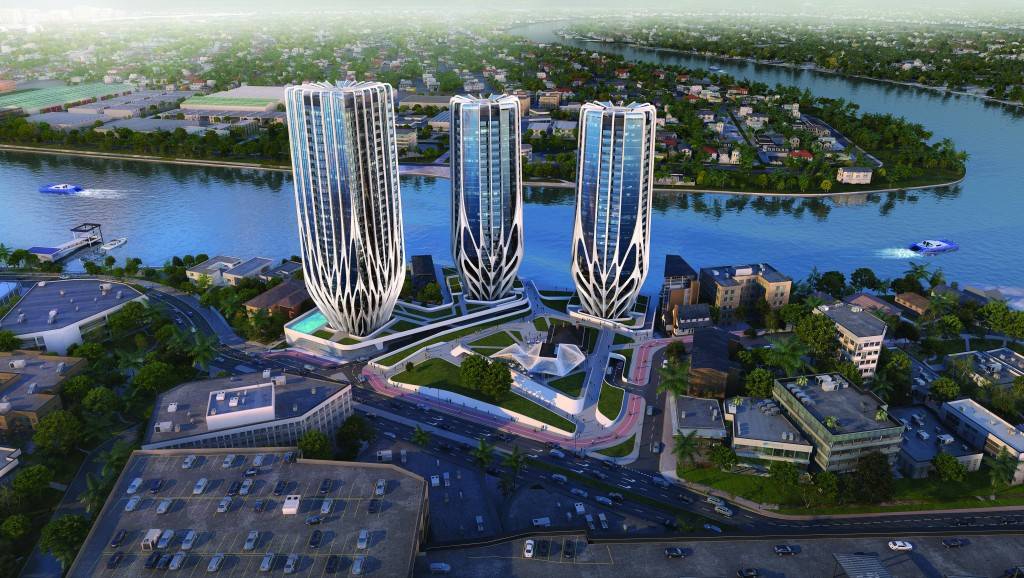 Flowers in bloom? Champagne flutes? These towers form part of Grace on Coronation, a project Zaha Hadid Architects designed for Australia’s Sunland Group. Located in Brisbane, Australia, on the Toowong riverfront, the project is slated to include 486 apartments and eight riverfront villas as well as nearly two acres of landscaped parklands. The towers feature a multi-layer façade with a curtain wall glazing that is overlaid with a quilted diamond pattern made from glass and reinforced concrete. The pattern emulates organic petal shapes creating a non-uniform lattice that becomes sparser as it moves up the building, eventually creating a cage-like structure toward the top. The conical shape of the towers is intended to respond sensitively to the surrounding land and to free up ground space to the public. “The design tapers each structure to minimize their footprint and open the riverfront to the public, creating a vibrant civic space for Toowong within a new riverside park,” Zaha Hadid said. 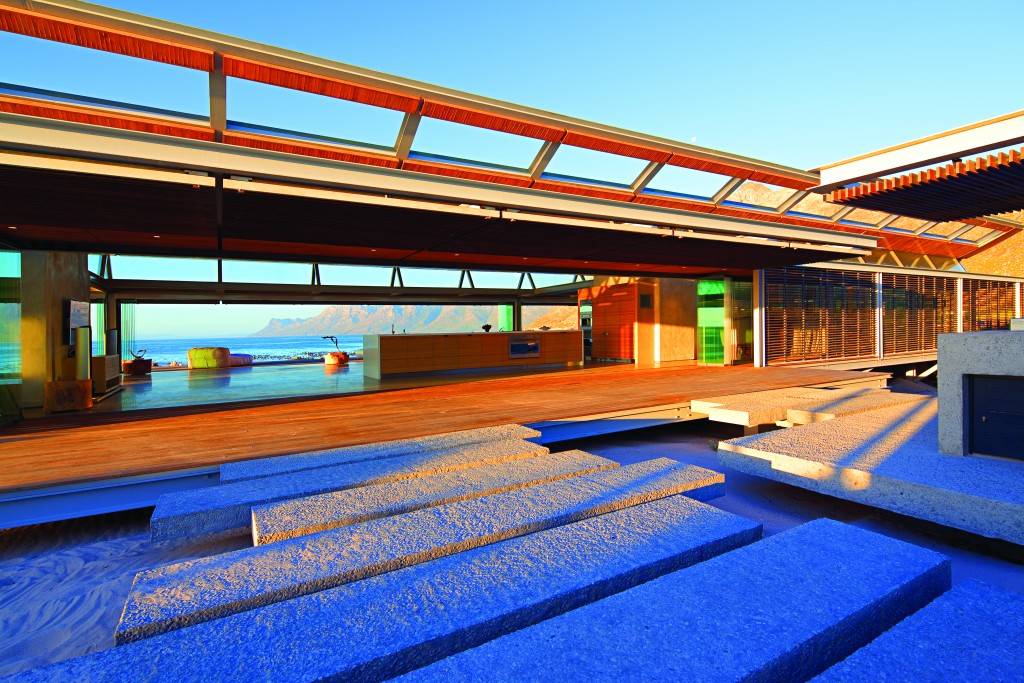 Located on a craggy bluff in Rooi-Els, 60 miles from Cape Town, South Africa, this house is essentially perched on the southern tip of the African continent. Elphick & Proome Architects of Durban, South Africa, designed the home as a single-space residence, a steel-framed glass box that facilitates views of the surrounding mountains and seamless indoor-outdoor living. All of the external walls are sliding and folding glass doors filtered by slatted timber shutters. The doors open hydraulically to become verandas when open and a continuous secure screen when closed. The interior walls dividing living and sleeping spaces also slide away during daytime hours to create a single 4,850-square-foot living space that flows out on all four edges on to broad cantilevered decks. Ecological sensitivity was also central to the design concept. The steel-frame structure rises dramatically out of the dunes on steel legs that are elevated to ensure minimal impact on the sensitive fynbos vegetation and dunes that characterize the site. The architects say the effect created is much like an umbrella that connects isotropically to the environment cradling the house.

Beijing-based architect Ole Scheeren, a former partner at OMA, has unveiled plans for his first solo project outside of Asia: an irregularly stacked skyscraper in Vancouver, British Columbia, Canada. The design features multiple projections piled on top of each other and a roofline that resembles a cluster of cubes. While glass towers already dominate Vancouver’s downtown, many with views of the surrounding mountains and water, Scheeren says their verticality does not engage with the environment. His design aims to embrace the city and nature by projecting living spaces and outdoor terraces horizontally. “The design for this building exemplifies our ambition to reconnect architecture with the natural and civic environment and go beyond the hermetic confines of towers that increasingly inscribe our lives,” the architect says. Located on one of Vancouver’s main avenues, 1500 West Georgia will comprise 48 floors with 235 apartments and two floors of mixed-use space at ground level. 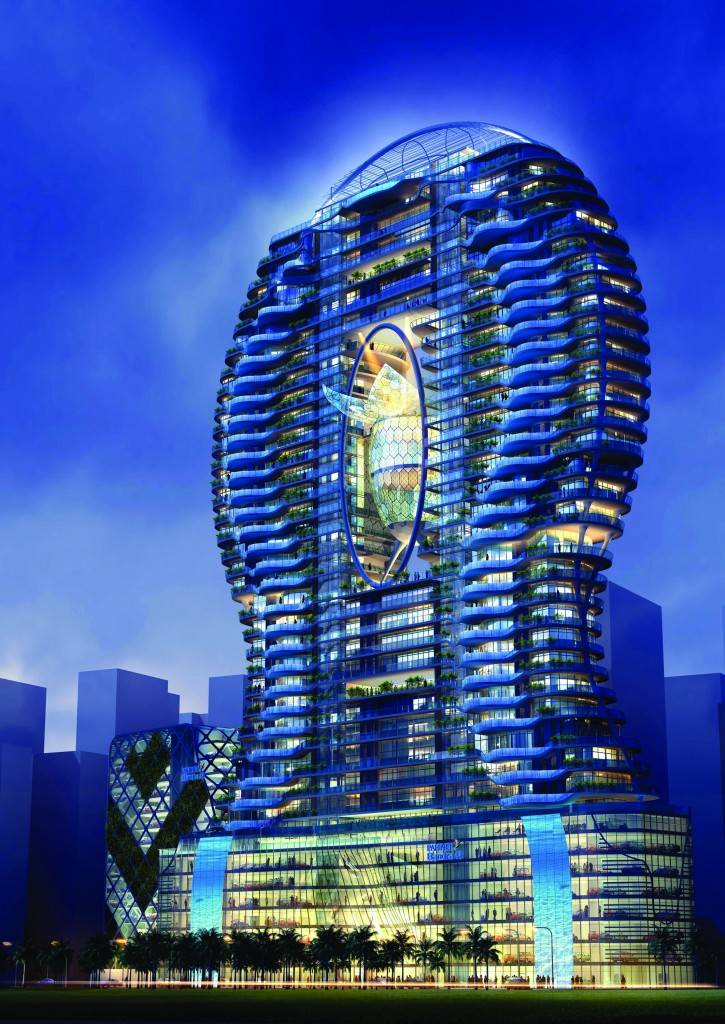 Walls that change color, integrated voice command, and custom technology that checks your weight, blood pressure, and temperature. These are just some of the building features that James Law, founder of Hong Kong-based studio James Law Cybertecture, integrates into his building designs. The forward-thinking architect has designed plans for this 30-story residential tower in Mumbai, India. Named Bandra Ohm, the building is meant to evoke the ripple effect generated by water droplets or capillary waves. The outline of the tower aims to demonstrate the fluidity and dynamic nature of the ripple, an effect that is created via a continuous shifting of infinity edge pools in each unit. All residences at Bandra Ohm feature pool balconies enclosed in acrylic, the material used in aquariums. The ripple pattern also evokes an abstract representation of the Ohm symbol ( ), where an egg-shaped Cybertecture club house occupies the void in the center. The top of the egg is meant to open like a lotus flower to be used for a variety of activities including yoga, meditation, and special events. 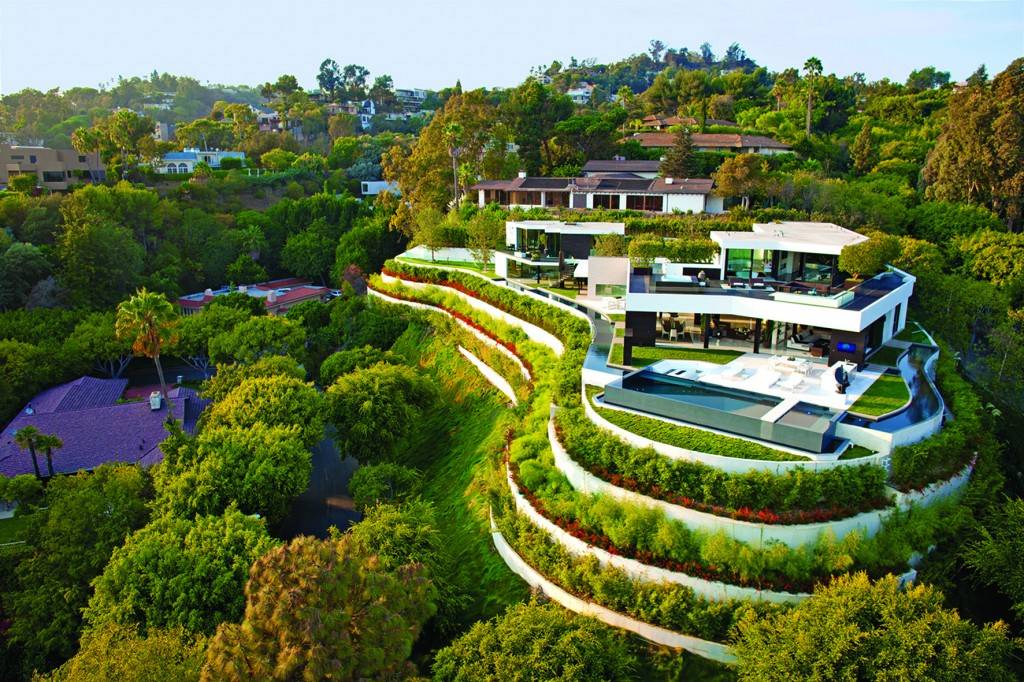 At first glance, Laurel Way looks native to Bali, not Beverly Hills. Whipple Russell Architects chiseled away the hilltop to create the terraced site, creating a flat pad upon which a house could be built and then surrounded it with retaining walls. Today, set atop three tiers of greenery and surrounded by water channels, a $36 million house on Laurel Way appears to float over the hills with views of downtown Los Angeles to Santa Monica and the Pacific Ocean. Catering to West Coast living, the designers paid special attention to the decks, patios, and outdoor spaces, including the incorporation of al fresco dining, cooking, and entertainment areas; a spa; fire features; and a swimming pool. There is even a moat water feature that flows from the pool encircling the house in a horseshoe shape. At 42 inches deep, it replaces the need for railings that obstruct the view and enhances the floating quality of the design. At the very top, a master suite opens to its own 1,200-square-foot deck.