Our friends at TopTenRealEstateDeals.com have rounded up a spectacular mix of notable abodes currently up for grabs, from an extravagant French-style abode along Fifth Avenue, to Hugh Hefner’s former Playboy headquarters.

Designed by renowned collector, author, and interior designer Howard Slatkin, this nod to the Palace of Versailles in France rests in the neo-Romanesque-style building originally erected by Arthur Brisbane, who claimed the top three levels of the 15-story edifice—now still known as the Brisbane House—for himself (Slatkin’s abode occupies a mere portion of Brisbane’s massive 30-room triplex). 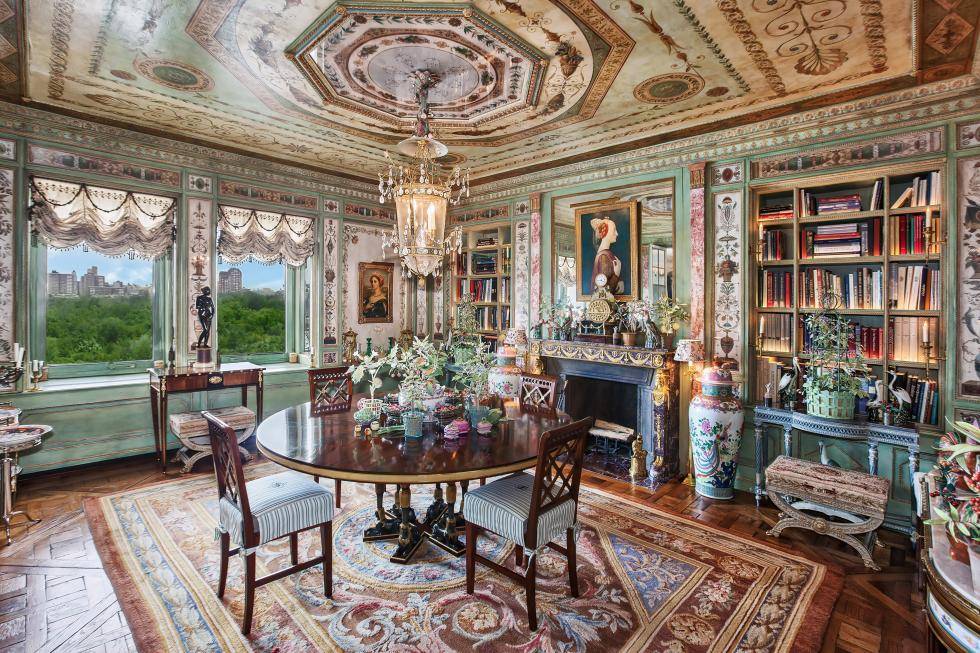 Presently asking $10 million, the three-bedroom, four-bath residence along Fifth Avenue is dressed in gilded moldings, marquetry wood flooring, 18th-Century Chinese wallpaper, and hand-painted plaster ceilings, and features a French marble Louis XVI fireplace and tall doors. Its living room and entry vestibule lead into a long gallery that connects to a south-facing library and eat-in kitchen, while its master suite comes with a couture-designed dressing area.

On the Ocean in Vero Beach

Accompanied by 200 feet of beach frontage, this 18,000-square-foot mansion in Vero Beach consists of eight bedrooms and 12 baths, not to mention a beauty salon, separate gourmet and catering kitchens (on top of the outdoor kitchen with a pizza oven), and a guesthouse. 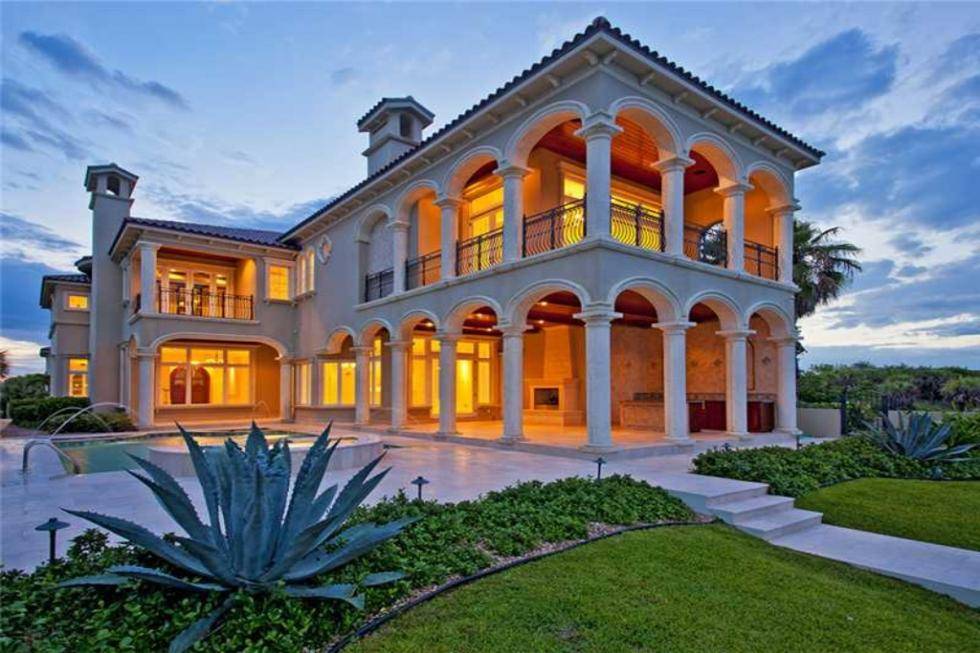 Now being sold completely furnished, the newly-built home—listed at a record-breaking price of $35 million—is adorned with countless luxury finishes, from Silver Shadow Alabama limestone and American walnut, to exotic marble and onyx and bamboo cane. To boot, outside lies not one, but three pools.

Situated on 1.83 acres of waterfront by Lake Geneva, this blue-and-white mansion is surrounded by lushly landscaped grounds that house indoor and outdoor pools, a putting green with tee boxes, oversized patios, and outdoor kitchen, a fireplace, and a covered porch, plus a private dock with two covered boat slips. 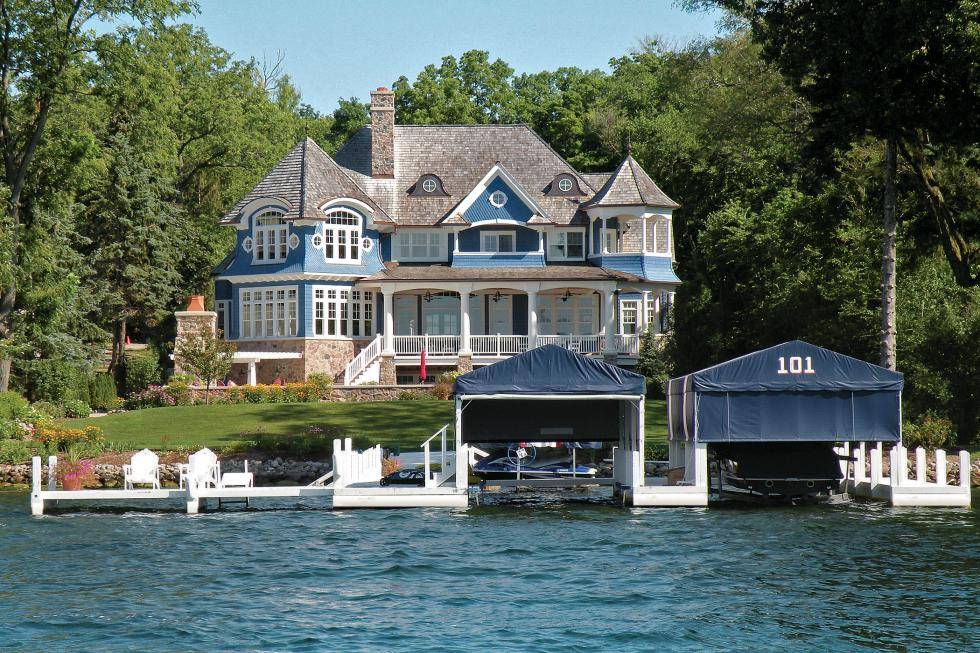 The six-bedroom, six-bath property—set to sell absolute on May 19th—also features a wine cellar, a changing room with a full bath, and Jack-and-Jill bedrooms with built-in lofts and a mammoth bunkhouse (with four bunk beds and an office overlooking the lake).

Now on the market for $7.9 million, this 8,000-square-foot stone contemporary abode in Idaho’s Sun Valley showcases seven bedrooms and seven baths, with heated flooring and patio pavers throughout. 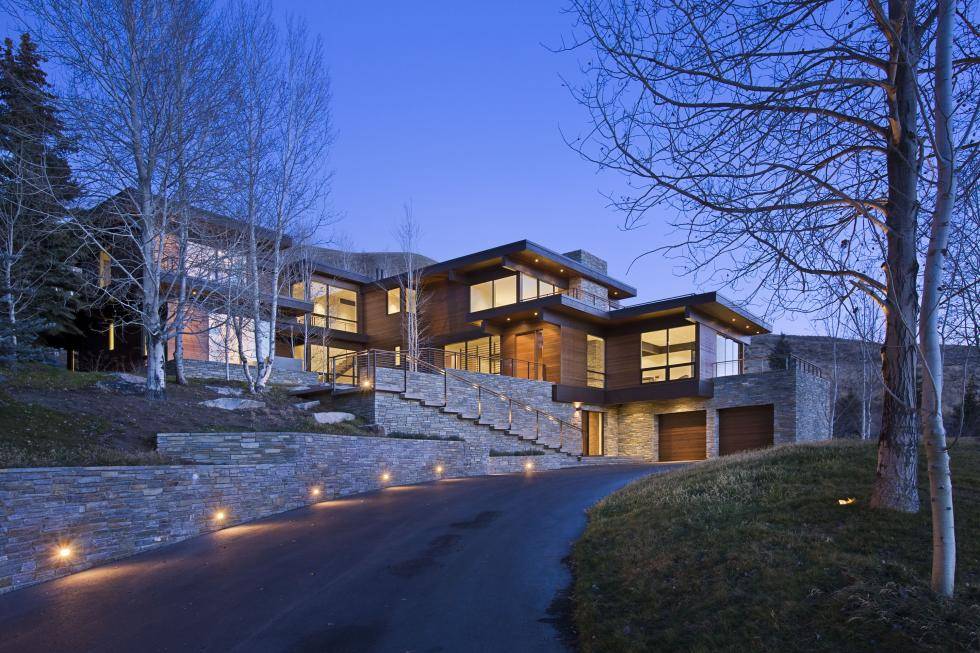 Hollywood funnyman Vince Vaughn is looking to unload his former bachelor pad in Chicago—formerly Hugh Hefner’s Playboy headquarters from the mid ’60s through the mid ’80s—for $13.9 million: a huge drop from its original asking of $24.7 million. 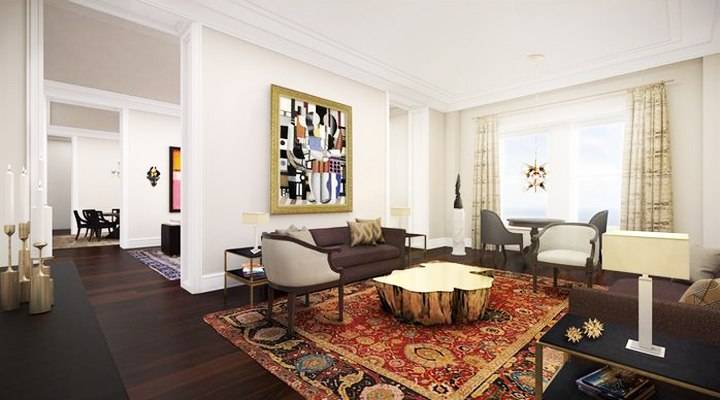 Tucked in the landmarked Palmolive Building in the Gold Coast area near Lake Michigan and the Magnificent Mile, the 12,000-square-foot penthouse features five bedrooms and five baths that span the top three levels of the 37-story building. The lowest floor showcases the home’s master suite along with four other bedrooms, while the second floor entry foyer opens to the formal living space, dining room, and a kitchen with Verenna cabinetry, two built-in Sub-Zero fridges, and a butler’s pantry.

The top level boasts a dedicated entertainment area complete with a media room, billiards table, and game room, plus a full bar, on top of Hefner’s original office. Surrounded by numerous terraces (including one with an outdoor kitchen), the residence is blessed with 360-degree views of the Illinois capital.